Update on my 149 S/N 2050047U464260
In addition to the rusty gas tank, another issue that has booted me out of the seat is the drive train on this tractor. The K321 manufactured for this series employs a slotted drive hub and a solid pin at the engine in front, with a single flex disk arrangement at the hydro pump in the rear. My problem is that the pins in the front either break or fall out. The root cause is wear in the slot which allows the pin to either wiggle free or break. 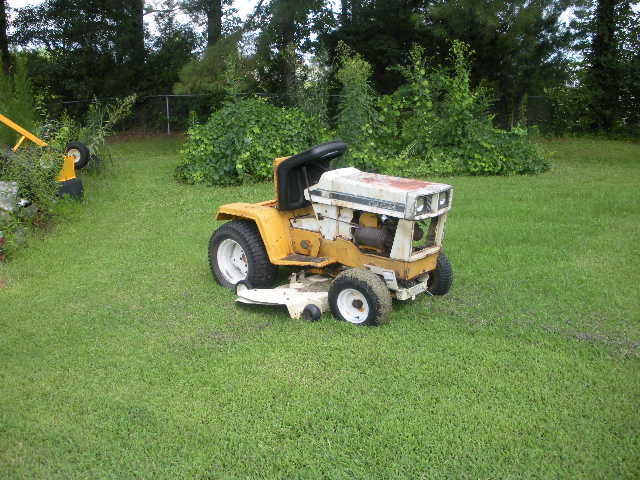 Yesterday the tractor left me in the lurch right after some particularly smart driving around and through the grapevines in back of the shed. Feeling very proud of myself for how quickly I had maneuvered forwad and reverse all while turning, I was disappointed when the tractor suddenly stopped in the middle of the yard. Evidently, the "smart" driving was a dumb move on my part.

I realized immediately what had happened: 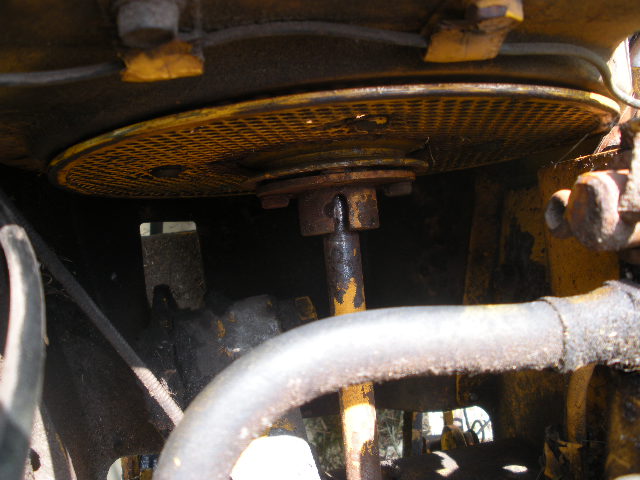 The pin was MIA from the slot! 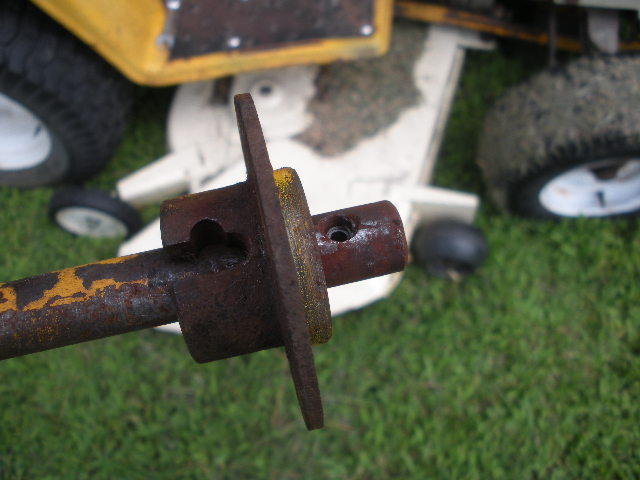 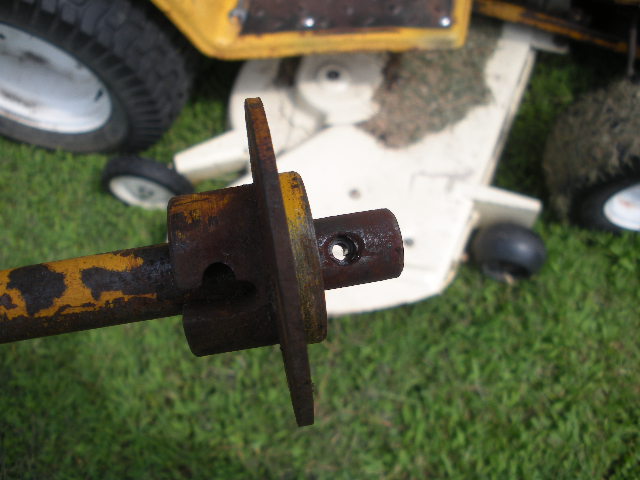 Notice too the worn slot in the first pic.

Luckily, I had a new replacement hub and pin from Cub Cadet Specialties on hand: 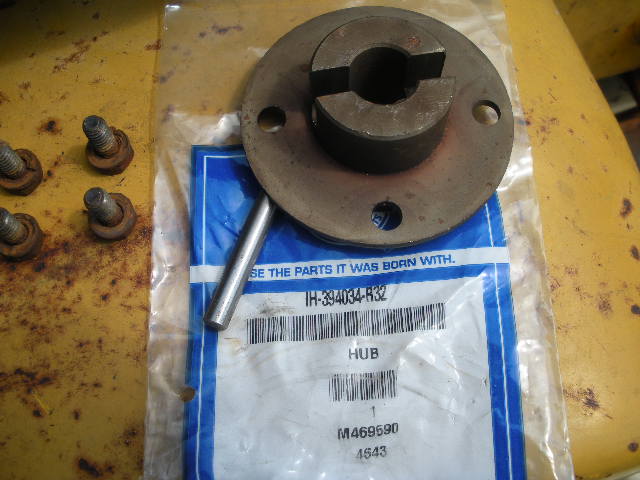 I installed a new disk from Cub Cadet Classics at the rear as well. 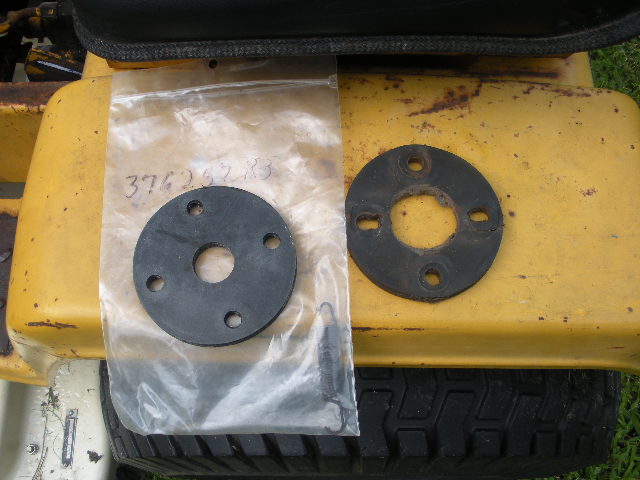 The old disk was correct for a 782, I had used it when I replaced the non-existant hydro fan a couple of years ago when I first acquired the tractor; the replacement disk is correct for the 149.

If you should ever have the opportunity to reassemble a Wide Frame drive train, please note the following sequence: 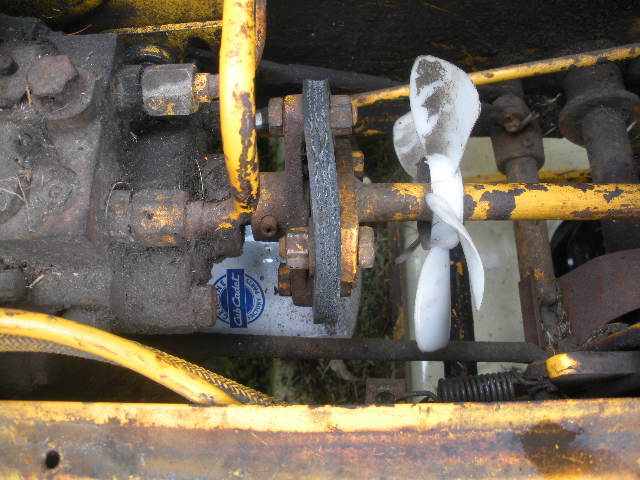 Install at front (engine, last 1/4"-20 bolt still to be installed just over the pin): 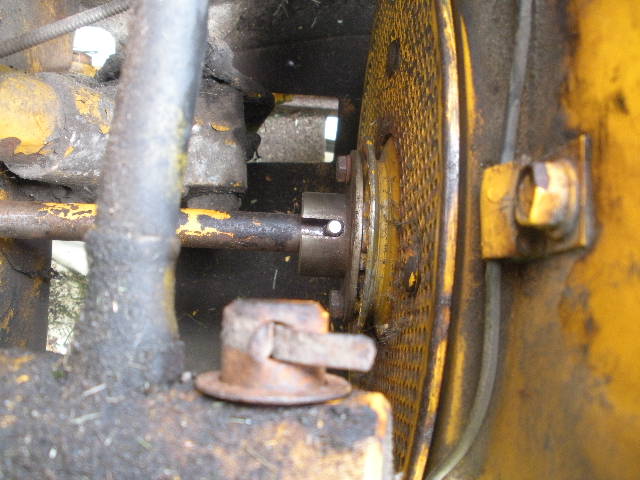 The job took me a little more than an hour. It is a lot more fun working on the Cub when you know what's wrong and have the parts on hand to fix it right the first (second, or third) time. Many thanks to our sponsors named above.

Final Note: I noticed some play at the rear where the drive shaft attaches to the hydro pump. The cast piece to which the flex coupling mounts appears loose on the input shaft to the pump and the pin seems a bit loose in the hole. I have some items to add to my next order.

If the new parts at the front and rear don't solve the pin-breaking problem, another option put forth by Paul Bell on Saturday, April 13, 2013 at 08:55 am is to install a Quiet Line style flex coupling arrangement at both ends. Since I already have a QL style drive shaft, I might give his recommendation a shot, but only if the style a original to the tractor just doesn't cut it. Paul mentioned that the QL style was less expensive to implement.
W

I always just install the coupler to the engine before the engine goes in. With the drive shaft already installed all you need to do is tilt the engine a bit and insert it into the coupler...not hard at all. Also, unless you resize the 1/4" hole in the drive shaft or use a hose clamp around the coupler that brand new pin will be missing in no time. It's a compression fit and if the drive shaft hole is wallowed it will just fall out. I use a 1/4-20 bolt and a nyloc nut when the shaft is worn. I cut the head from the bolt and weld a small piece at right angle so I won't need but one wrench. It's a temporary fix but I've made several bolts for quick fixes. I'm into my second year mowing with the 129 that has a bolt. I also weld up and resize the couplers because of their expense.
D

Frank C sent me over some badly worn coupler`s so I can weld them . I have welded a few in the last few tractors. I don`t know how long they will last ; but I have not had any pin problems for some time.I hope your summer is dryer than ours. Seems rain is all we can get over here. It is starting to bug me because I can`t get anymore seat time on my Cubs and MC.

Wayne: Thanks for the tip on the hose clamp. We'll see how this pin holds up; if it falls out, I'll put a hose clamp around the next one.

Don: It has rained most days for three weeks now, I've cut my grass wet "between the showers" twice in a row now.
D

JEREMIAH - Lose and have to replace a $6 dowel pin or install a $1 hose clamp NOW. I know which one I'd do. If the last one only stayed in two minutes it WILL fly out again.

Hey all - anyone know offhand if the external brakes on the 127 and 149 are interchangeable? Thanks
D

TERRY - I would say YES, but only as a complete assembly. IH used three different suppliers for those brake calipers and I don't think any of the component parts are interchangable.
F

All day I've been contemplating the engine vibration question that Harry brought up in the 169 thread and Scott answered with "tingling feet syndrome". Is there a way to measure engine vibration? Think of the factors involved: Operator sensitivity, engine speed, engine tuning, drivetrain balancing (if the driveshaft is turning), and a few variants that don't come to mind right now. I can't say if the K341 vibrates less with Dave Kirk's crankshaft plate because I never felt it run before the balancing was done. In my case, I've got a very comfortable machine to run and have never expected "silky smooth" from a single cylinder engine. That said:
Is there a way to measure engine vibration? I'm thinking of a full jar of water set on the hood or engine shroud and seeing how much shakes out (or if the whole thing just spills). C'mon back Truckers and talk to Teddy Bear.

Frank, use a metal bowl and attach it to hood with a STRONG magnet. Crack a couple eggs and add a little milk. Do you use a jockstrap while sitting on a running 169? It's in the manual.
H

Frank - now you have to tell the whole story about what Scott said:
Before removing the balance gears it was tingly feet.
After removing balance gears it was like sitting on sand paper.
My 1st thoughts were:
For tingly feet switch to rubber sole shoes/boots.
For sitting on sand paper buy a nicer/softer seat cushion.
But I never told him any of this. He actually provided a before and after which makes it sound like there really isn't that much difference in the vibration you feel.
I don't feel that much now, but I feared once I removed the gears that at idle the whole tractor might be swinging back and forth side to side. As it is my hood rattles and I just really hate using the hood clamps on the 1x8/9 series since they pull the hood right down against the dash.
So - as Frank requested, give us some vibration testing methods. I'd like to get Frank to post his test, and I'll do the same so we can see how much difference there might be.

Bill - I didn't find anything about a jockstrap in the manual. What page? And how long before the eggs are ready?

Jeremiah - nice posting of your front pin and coupler problem. I wanted to suggest that replacing that front coupler will probably help your rear one but I'd probably change that rear roll pin as well. If you think about it, the front coupler "was" slotting, and your engine isn't on a power stroke all the time, so the thrust on the drive shaft has short periods of on/off power, which probably contribute to the causing the slotting, and then the slotting exagerates the power on/off slipping which also contribute causing the rear pin to wear and even the rear coupler to slot. So, the moral of the story is - use a good coupler (no slotting) and replace the rear roll pin if it's got play.
F

Bill: Milk, eggs, and then what?
This is close to happenin', ya know.

Do I hafta wear a jockstrap while taking pics?

You guys are making me wonder about my K241 now. I have a very comfy seat that's not original so I'm not having any problem with my rear with an hour of mowing but I definately can feel the vibrations most noticably in my left foot. Honestly I was quite happy, the engine sounds fine and I never want for power. The effect with 10hp put me off the idea of a more powerful engine, but maybe it's not normal...

Frank, I would use lobster, shrimp or whatever is fresh at the time.
Jockstrap is only needed when operating tractor and please, no pics.
F 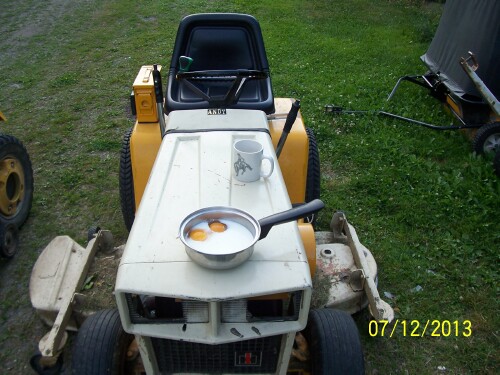 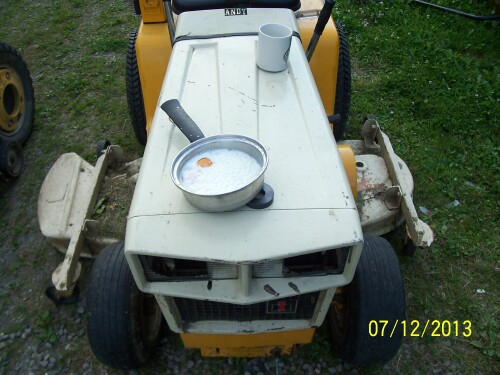 2 farm fresh eggs in a cup of milk in a 6" pan. Not worth much without video, is it?
Pics taken at WOT.
Nice try, Bill, but not exactly the test I was thinking of.

Looks like it shook off the magnet. I wonder why they didn't scramble? That's a lot of milk and weak magnet.

Frank, this guy wants to know what color were the eggs? 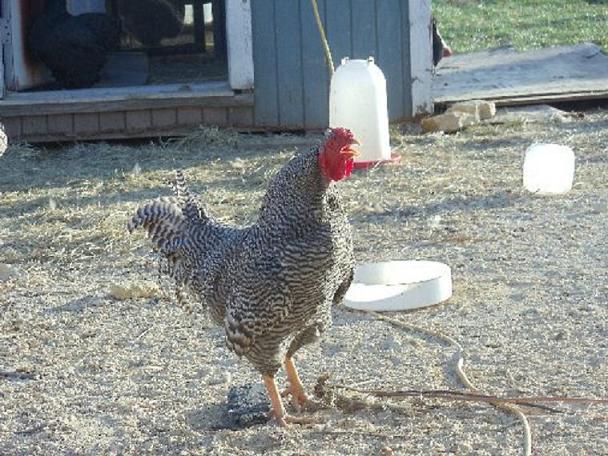 Now to stay on topic,
here is a reference photo of the topside of a gear drive 128 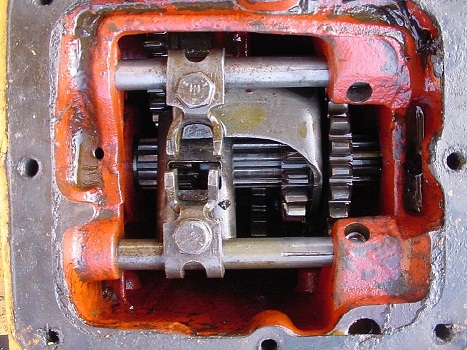 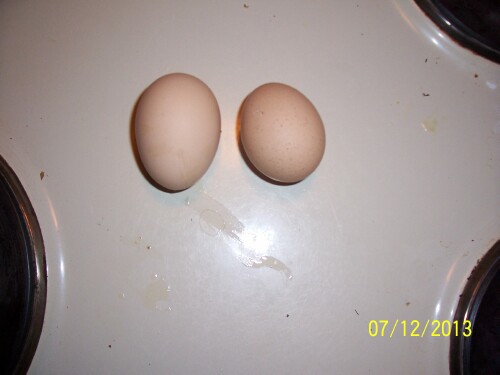 I should put a Cub Cadet thingy in here, shouldn't I? Here it is:

In all due honesty I'm starting to lean away fron the narrowframes.
Trouble is, I remember going to a play years ago titled "They Were All My Children".

Bill: That's the point I'm trying to get to. If they'd scrambled I'd think the vibration was too much. So: how do we judge the vibration of these engines?

Thanks to CC Specialties i'm going to be mowing with a Cub Cadet again! It's been a few years now if I recall correct.
I have been using a Yard Machines MTD up till a couple of weeks ago. (rear end went out)
Thanks Charlie!!! 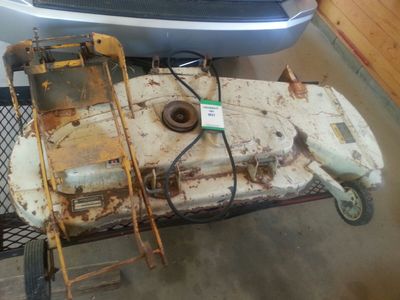 Bill - I checked out the manual where it references the jock strap! If I interpreted it correctly I believe you're supposed to wear ONLY the jockstrap when operating the tractor so as to reduce the risk of other articles of clothing from becoming entangled in moving parts.

J
Tractor For Sale For Sale one Lot Deal