Took my engine to an old-timer machinist recommended by local garden/lawn tractor shop. Ordered piston as advised, brought to him and had him fit it to the bored and honed cylinder. He also lapped the connecting rod mating surface a couple thou', as it was out-of-round vertically, but on-spec horizontally. I do recall an old engineering prof "engine guy" mentioning doing this. Anyone here heard of it, and, if so, what is your experience with doing this?
During reassembly, (hadn't really gotten around to cleaning up parts properly, before), I saw this: 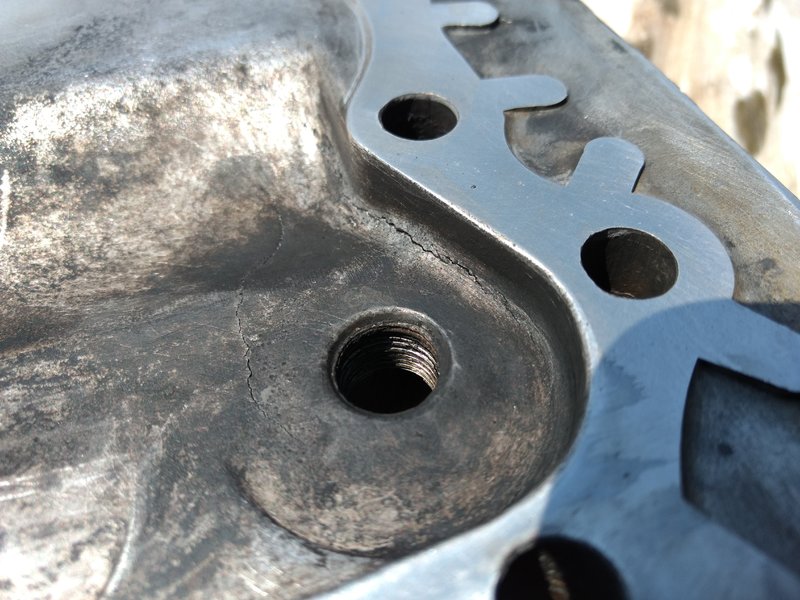 Cracking?? around spark plug hole. Does not seem to go through head. Is this just a casting defect, or should I be ordering a new head?
I had intended to replace the balance gears, changed my mind after Digger gave me a call, but the shim washers he sent me came in handy anyway: they're the right size for adjusting the camshaft endplay, too.

Made sure I checked the ring end gaps, too, my machinist repeated that lots . . .
Planned on doing the Dave Kamp mod on my driveshaft, went from PO's massacre: 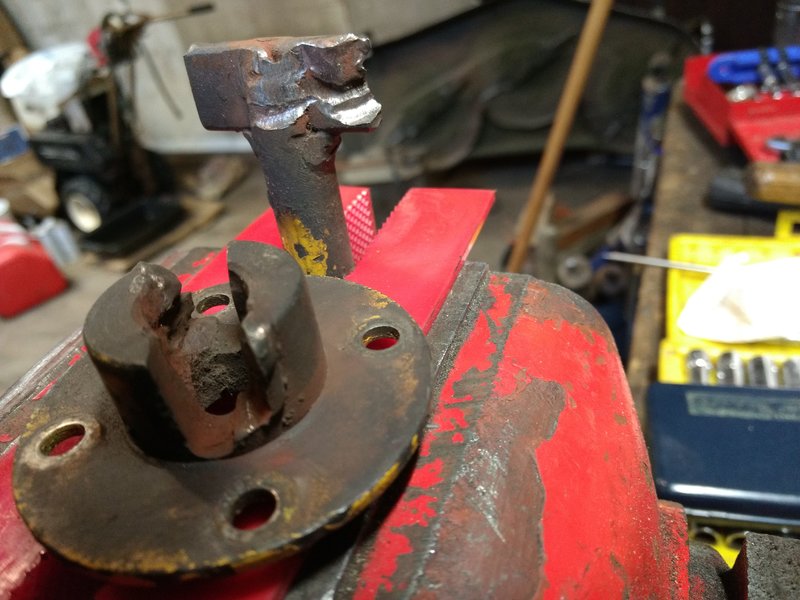 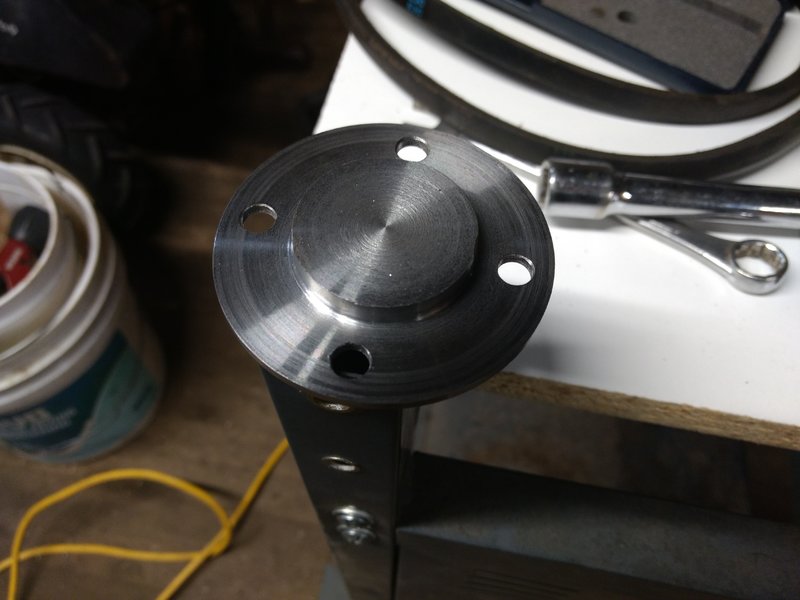 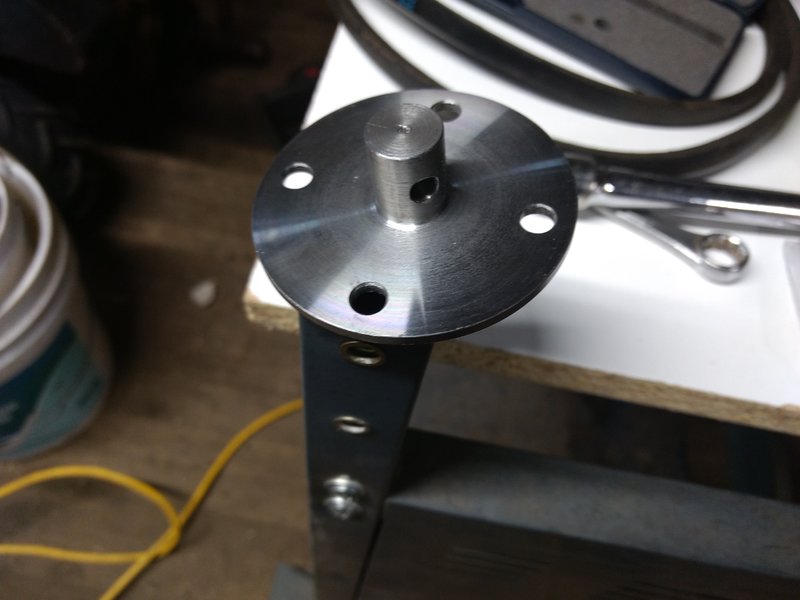 Machine shop said it was easier just to make a new adapter. They'd made it just a bit oversize to go into the drive cup, so chucked the shaft end into my drill press, and gave it a couple light swipes with a file while turning. PERFECT! 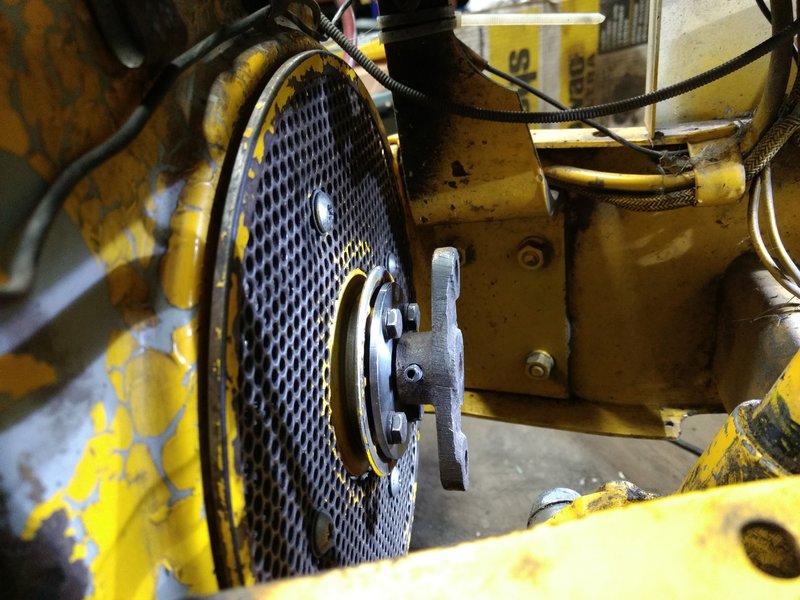 Had the machine shop cross-drill the yokes, too, then used the yoke hole to line up and drill the shaft. 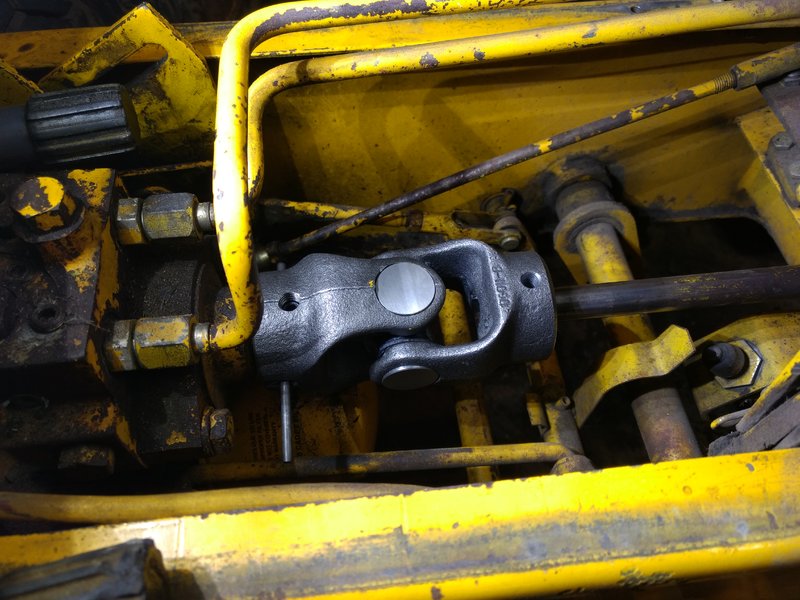 Yeah, much larger yokes than I'd like. Doesn't leave much room for the cooling fan. (to be ordered).

Last point of note, the old machinist showed me a crack in the deck, which he said shouldn't be an issue, as it was not up to the valve insert: 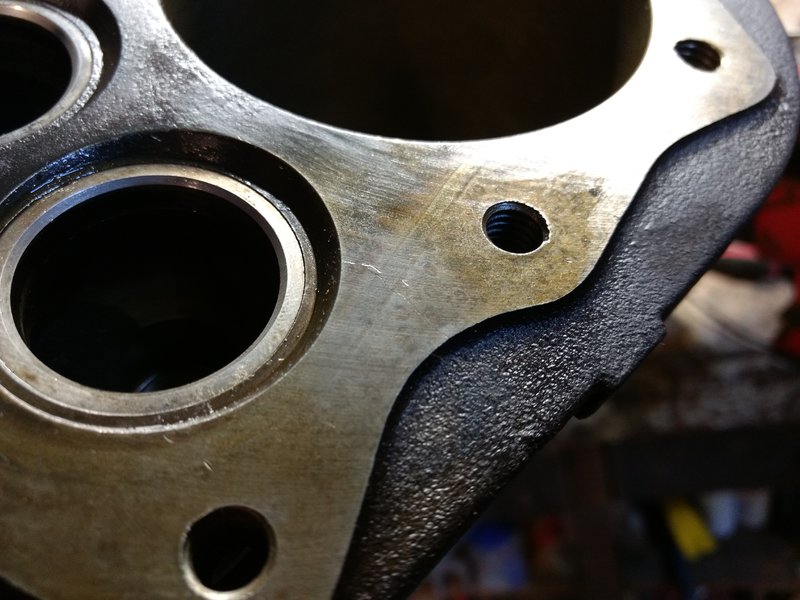 I've had to reassemble my engine with these known defects, because it's my WORKER. After I gave it a 10 minute run-in, I changed the oil and re-torqued the head bolts, then mowed for a couple hours. Not exactly what I'd like to have done, but noted "no" oil used, where before I rebuilt it, I'd have been down more than half a quart, and had the breather slimed up with oil drool. Hoping it stays together, don't want to waste the effort, but figured if the head lets go, at least that is an easy replacement.
Things I'd do differently if I did it again, may do yet, would be adding a larger air filter with an extension, based on the old machinist's comments that the very sandy ("potato growing") soil in my area tends to wear out Kohlers faster than more clayey soils in other, nearby areas. I'd also do some painting and other cleanup, but the grass just won't hold off that long. Maybe next year . . . sigh.

The cracks in the head and block wouldn't bother me too much as long as they don't grow. I would have replaced the original connecting rod if I was in the engine that far. I'm curious to hear how long the U-joint lasts in the driveshaft. Over the years, several people have done that, and not all have had good results.
M

The head would worry me enough to find a replacement. I don't think I'd swap it right away but more likely keep it on hand and replace it in the winter ( since this is a worker). The block wouldn't bother me at all. I'm also interested in your driveshaft "update", I've considered doing this to my 169 but I'm not convinced it's the way to go. So let us know how it's working out .

Thanks for the input, Matt and Mike. That's what I was hoping for.

The oversize u-joint itself should be ok, though I do have some concern over that much mass on the driveshaft. If I did it with more time, I would consider a 3/4" or 7/8" holllow shaft between the front and the back, to resist flexing better. That being said, the input shaft end was already a half-diameter or more off-center because of the wear, so a major improvement in balance of rotating mass. Looking at it during the first, 10 minute run-in, I noticed no visible shaft vibration at 3600 rpm, or at varying speeds less than that. It is a full, needle-bearing u-joint, not like some smaller ones I've seen with bushings only, and has a grease fitting.

I was concerned about how much vibration I would get from removing the balance gears, guess I lucked out on that, not very noticeable. I would consider the corrective added weight if I have to go into this engine again; I also want to contact a relative who has a custom machining company with a fair bit of automated equipment, but also himself and another guy who do the "special" jobs that need a master machinist's touch. He might be able to do the balance gears in steel, changing the design to a wider bearing spacing, instead of that 3/8" spacer on the shaft, at a reasonable price.

On the cracks, I'm planning on keeping an eye out for fire-breathing from under the top tin - I frequently find myself mowing into the evening, so lifting the hood while I idle it down after mowing, while blowing out the grass, should let me see if there's any through-cracking. It would probably also make itself very clear in the running and power, I imagine! I'm going to keep my eye out for a swapper or parts engine, they sometimes come up around here. (in the last year, I've seen: 16 hp K341 for $400 used, should have bought it, 12hp for $40, unknown condition, NEW K321 shortblocks, unknown price, currently advertised as of 2020 05 28).

Forget the balance gears and ad Dave Kirks balance plate instead.
The K341 I did over the winter has the plate and it is the smoothest running Cub I have.

Thanks, David. I've "stolen" one of his other ideas, already. Drilled a hole into the drain plug and used high-temp epoxy to fasten in a high-strength magnet. Amazing how much metal dust gets created in just the 10 minutes of breaking it in.
K

mgonitzke said:
The cracks in the head and block wouldn't bother me too much as long as they don't grow. I would have replaced the original connecting rod if I was in the engine that far. I'm curious to hear how long the U-joint lasts in the driveshaft. Over the years, several people have done that, and not all have had good results.
Click to expand...

I put ujoints in my 147 20 years ago and have had wonderful luck, still on the same ones!
M

Forget the balance gears and ad Dave Kirks balance plate instead.
The K341 I did over the winter has the plate and it is the smoothest running Cub I have.
Click to expand...

And my experience is the exact opposite! I would never do it again! I'm glad I kept all the old parts. If I can find the bearings and journals I am putting the gears back in.