Gear-drive models: do they all use the Cub's 3-speed tranny?

I may buy another Cadet in a couple of years (I have a hydro unit now). I have heard that some cadets with the 3-speed have the transmission from the farmall cub. Or, do all 3-speed cadets have the cub's tranny? Thanks.

There are some differences, but it is real similar. Someone will explain it in detail soon, I am sure. I know the shift stick is straight for the cub, and bent for the cadet. The axles are different, obviously.
H

Dang, where are all the gear drive guys that can explain this. Hope they show up soon since I would also like a better understanding.

What I know is pretty similar to Marty. The IH Cub Cadets used the same rearend as the IH Farmall Cub and I assume the Cub Lo Boy tractor. If you pulled the rear cover plate everything you see would look basically the same. Now, as far as the transmission section on the front of the rearend, I believe but don't know for certain, that it was really the same except some of the gear ratios were different. Can't say these details for certain. One of the gear guys needs to chime in.

Dustin - so as far as I know the gear drive tranny/rearends were all the same in all the gear drive IH Cub Cadets from the Original up thru the 82 series with some exceptions:
The EXCEPTIONS include the Model 1100, and the Model 482 and I believe some of the Model 582's (I think it was the Model 582 Special). The Model 1100 was made during part of the Quiet Line era ('74-'80) but not considered a Quiet Line since it didn't have the side panels covering the engine. It used a Peerless belt driven transmission/rearend and a Briggs/Scrapiron engine. It was an IH attempt to provide a lower end competitive priced model and basically developed a poor reputation compared to the other IH models. I believe the 482 and 582 (Special?) were somewhat similar in that they were the lower numbered model units from the 82 series but I don't know what exactly they used for tranny/rearends.

From the outside, looking at it from the back of the tractor, you can't really see any difference between the gear drive and the hydros, except where the fill plug is located on the back cover plate. (The gasket for the plate is the same for gear and hydro drives).

The Original tranny is a little different also. The brake setup is different, along with the axle tubes.
Here is a diagram of a hydro tranny. This will show a lot of the differences. Looks like the front end of it is a lot different from the gear drive. 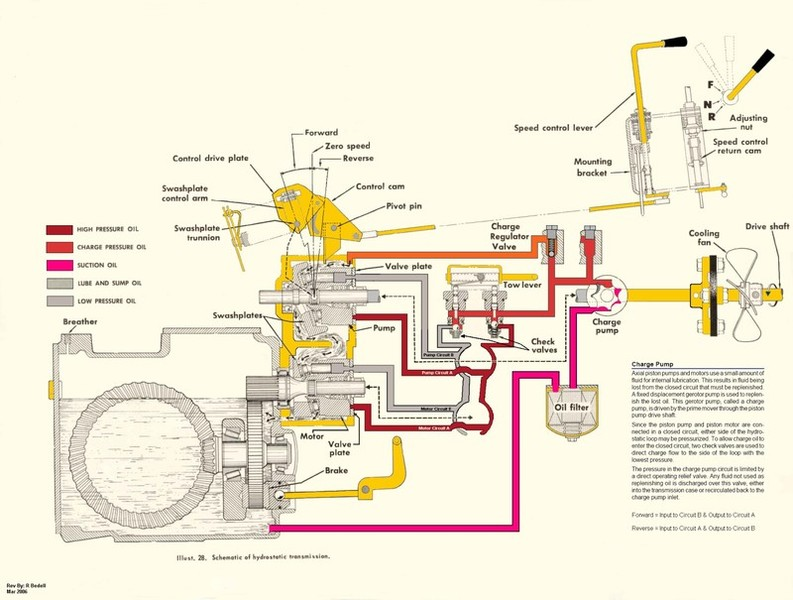 The 482 and 582 special used the Peerless transaxle.
H

Thanks Marty, I knew the tranny front end was a lot different. I was sorta wondering more about the rearend part of it with the big ring gear. I'm guessing it's very similar.

Dustin - no one really chimed in yet with specific details. I know over the period IH produced gear drives they did switch 2nd gear in the tranny. Can't remember the exact tooth count, but I think some years got 26 and some got 28. Don't know why either. Otherwise I think 1st and 3rd were all the same - but this is subject to correction.

Why don't you just stick with the Hydro units. Pretty certain that internally they were all basically identical during IH production. Then you don't have to worry about those pesky clutch issues or failures AND you get infinitely variable speed control, quicker shifts from forward to reverse, and you don't have that thing sticking up between your legs that might cause serious injury if you happen to slip forward off the seat, and you won't have that optional Hi-Lo Creeper gear box, or the M&W 9-speed gear box highly sought after by the Gearheads.

Can't figure out how to delete this.

Kraig, Oh Great One - can you help remove? There is no longer a delete button/feature.
Last edited: Jul 22, 2022

Lemme just say that before the battle begins over gears vs hydro, I'm on Harry's team!!

Harry,
Hydros' don't have a gear stick or creeper to use. That takes all the fun out of it!

To remove the emoji, just go to edit, then click to the right of the emoji, then press the backspace button.

mgwin said:
Harry,
Hydros' don't have a gear stick or creeper to use. That takes all the fun out of it!

To remove the emoji, just go to edit, then click to the right of the emoji, then press the backspace button.

Did that but when there is nothing in the post after editing it won't let you close it.
H

PACub100 said:
Lemme just say that before the battle begins over gears vs hydro, I'm on Harry's team!!

You're on MY SIDE!!!!! Who would'a thunk that with a name like PA Cub 100. (Actually IHCC 100 with fenders is my favorite classic tractor before Hydros were built).

But remember, there was a point in IH sales that 9 out of 10 were Hydros - so we are in the Majority.

I have one manual trans tractor-my 1989 1050. What I don't care about it is while mowing, the throttle is at full, when I need to go into reverse, the tractor always manages to spin a tire. It has the original turf style Goodyears. My hydros are much easier on the yard.
B

The 154 used a real disk with a splined hub and Rockwell or lipe pressure plate not the fiber washer with three holes drilled in it like a cub cadet. All of which is easily looked up on ih parts websites.