The only problem I can see with that hypothesis is that if the cover was reversed, the boss for the fill plug would really be sticking out, and it would be impossible to thread the plug in from that side because the threads taper the wrong way. That doesn't appear to be the case with that cover plate. Also, there would not have been paint on the inside, either.

According to that line above the fill hole, it looks like it had a tiller mount on it at some point.
R

Can anyone tell me if there's a narrow frame posthole digging attachment?... or does anyone know of a DIY setup for drilling postholes? 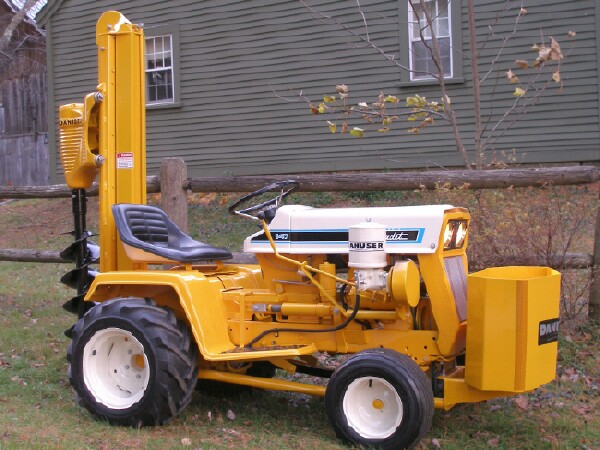 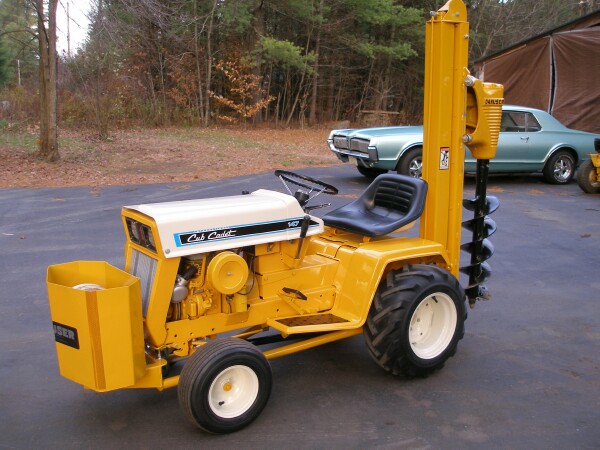 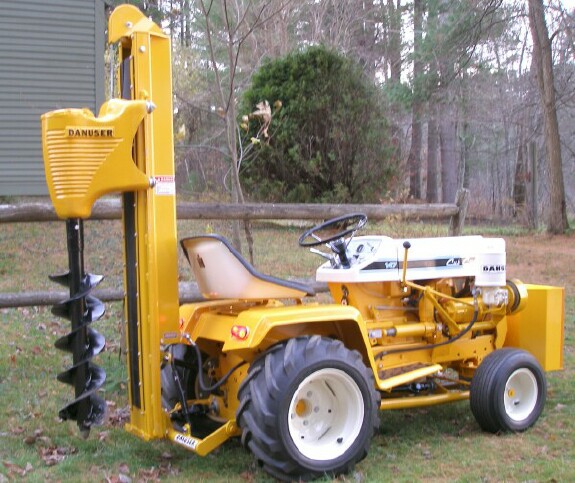 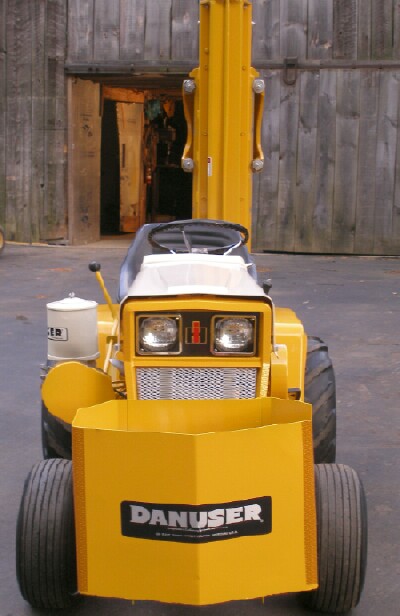 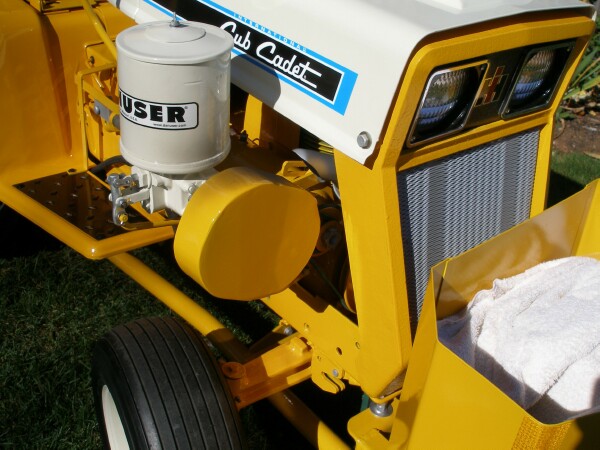 This one belongs to Eric T. way up in the N.E.
T

The transmission rear cover is not an original IH cover, as made by IH. The top (and bottom) dowel pin was used with the cover for a rear PTO, to prevent any side-to-side or twisting movement of the cover/PTO assembly. The cover plate used with the PTO had an opening with 6 holes around it, 1 for the dowel and 5 to bolt the PTO bearing housing to the cover. There was a small blank cover to bolt onto the rear cover if the PTO and bearing housing was removed. These dowel pins can be rather hard to remove once they get rusty, so this transmission may have had a PTO in it at one time and when removed the dowel left in place and a cover drilled to fit the dowel, or a PO may have installed the dowel for another reason. Be interesting to see if the transmission top shaft is for a PTO.

Paul,
Intsersting. I'll have to look at my 120 with the rear PTO and see what is back there.
R

TOM,
I still see a couple of COUGARS around town sometimes.See em at car shows now and then. But I've never seen a CUB CADET <u>anywhere</u> with a post hole digger mounted on it! <font color="ff0000">IT'S AWESOME!</font> Sure like to see more photos of attachments.
D

TIM - CC engines were either yellow, or black. WHITE must have been a prior owner repaint.

ROBERT K. , CHARLIE - That's a NCE looking 147 & DAUNSER post hole "digger" (TOM - I agree, we need more pic's of the COUGAR too!) Thing I see on that digger is the auger isn't adjustable for tilt & angle. Having built too many miles of fence years ago we always tried to keep the posts verticle even on slopes. Doesn't look like that digger can do that real easy.

Daunser still makes the best diggers, mostly Cat 1 3-pt mounted. They're not cheap but you can rent them. Another idea is to use a 2-man gas powered post hole digger, beats digging them by hand!
D

That is a fine looking 147 ! I almost pulled the trigger on a Cougar xr7 in 1975 , but the head sales guy told the guy that came out to see me that I had no money to buy. I went down the road and bought a 1975 Firebird and spread a little black in front of there show room window,his boss was pissed to see me in a new car with a temp permit in the window.

post hole diggers are not much good here we seem to have way to many rocks for them . I rented a digger on wheels with a 11 hp Honda eng once and got down 6" and that was it for the digger.
D

DONALD - We never had surprises like finding rocks when drilling post holes. Few times Dad had to apply "Body English" by way of a long 2X6 or steel bar like a fence brace or steel post to the digger to get it to dig into hard clay. Dad's 250+ pounds hanging on the end of a 6-8 ft bar off the auger gearbox increased it's ability to penetrate hard ground quite well.

Our digger had an 8-9 inch dia. auger then Dad found a 12" auger that would fit it. With the big auger the Super H was none too big for that job.

I actually think a Fast Hitch digger would work great. 3-point hitches don't have down pressure, the FH did!

A digger like that one on that 147 would be handy for lots of jobs. Sure would beat digging holes & trenches by hand!
D

Denny
Its snowing here! I`am out in my shop doing what I hate most(sanding ) .I would like your input on something in the sand box on my 450 snow blower.I know what i`am going to do if I can is not for a purest IH guy , but I know farmers had to make changes to keep things working. I can`t hurt it now lol.
T

So I'm breaking down this 1200 with that "odd" pin/dowel and I notice something staring at me..... 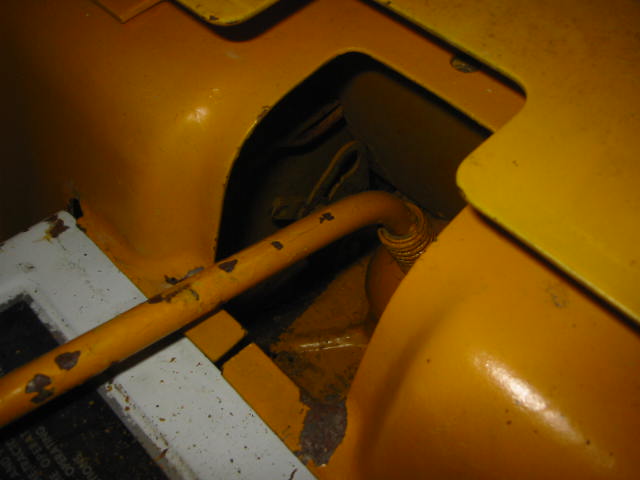 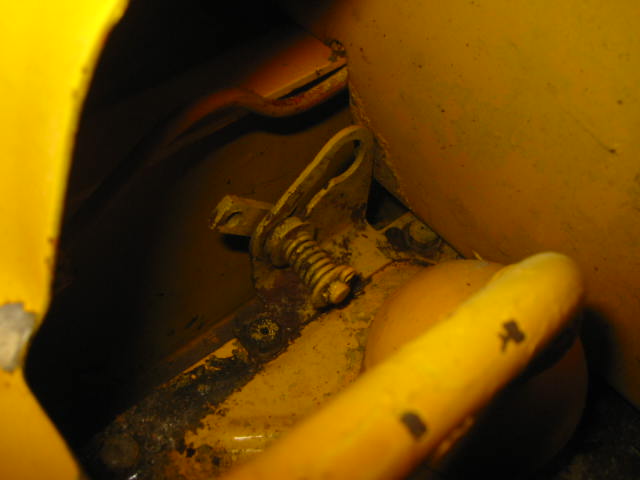 Now I know why that pins is there.

So for the lesser knowledgable people, can we assume that whatever that little part is for confirms that the pin/dowel was for a rear PTO?

Making that little bracket part of the engagement handle?
T

Nick,
That would be correct. I have to get a better look at a parts manual to see what's what in there.
T

Picked up parts machine tonite. Wifey even helped guess I am not in doghouse

Tom there is a better picture of that in april 7th of 2009 archives when I asked about it. The tractor used to have a spring assist and tiller on it. The spring assist went to Tristian in Ohio and the tiller is on my 149.

Tom
If that still has the top shaft for a PTO in the transmission, you should be able to see an inch or two of the splines on that shaft sticking thru the wall between the trans and the diff case when you take the rear cover off. I wouldn't think some one would have bothered to swap out the top shaft when the PTO was removed, and then put the PTO shift lever bracket back on with the trans cover.
T

and this according to wife and daughter is pile of poop #3. they just do not see the beauty or I am going yellow and white crazy. 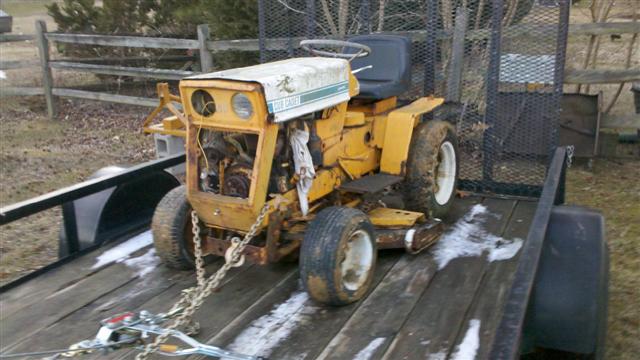 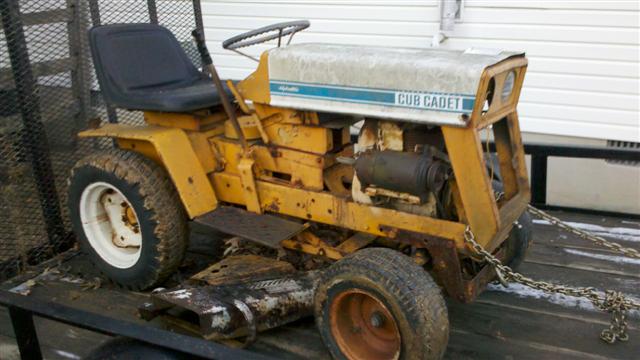 and yes the mud on the tires proves it was not easy to drag it out of the woods and the come along is a life saver.
R