Welcome Aboard CC guy. Nice to see you here and a couple of nice projects you've got there.
W

Thanks for the welcome. Still trying to learn how this forum works.

Nice looking machines. Looks like a nice MTD built 682. Odd choice of repower for that 782, but it's a nice looking machine as well. Has the early grille still with the mesh insert still in it. I've always liked that look better than the later grille.

Started work on the 782. Checked compression and had 110 on both clys. Glad to see that. Tried to get it started but no luck. Checked plugs and cleaned them and they were firing. No gas so checked fuel lines and cutoff. Seemed to be ok. Removed card and dissembled. Could not believe what was inside. 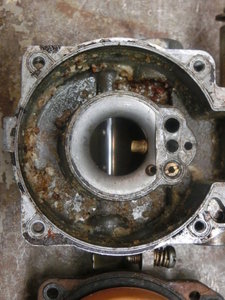 Carb cleaner would not clean some of it out so I scraped some of it out and let it set in the cleaner another
day. It was better but didn't get it all out. Put it back together and it did start.
Ckecked out some other things and found. Starter switch was bad. had to buy a new one. Voltage regulator was bad. Bought a new one. PTO didn't work right. The magnetic fields ok but bearing was bad. Bought new bearing and reworked the rest of it. 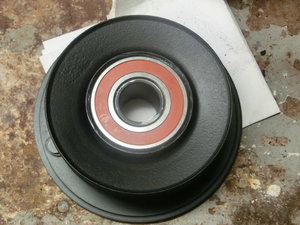 Reworked disk brakes. Started to fix the mess of wiring po made but put it off until later.

Steering gear needed reworked. Bought Ross gear easy steering kit and tried to replace pin that follows worm gear. I found out it can't be removed unless the steering column is removed. I have taken one out of a 1650 tractor before and it is a major job. May leave it alone and live with the play in the steering.
Thats enough for a while I tired of play with it. Save some fun for another day.