Dennis,
You may be right on the K181 replacement engine air cleaners, but the few I have seen that I knew were 8 hp replacements had the K161 7hp air cleaners on them. Maybe they were just a short block replacement. Any way, the air cleaner on a 86 is 2-1/2" tall/deep/thick, whatever you want to call it, and a 7 hp is 1-5/8".

I did not see your post about the price CCC/MTD paid for Cub Cadet, but I have never seen anything telling the price nor did I ever here Harold Schramm say what it was. Besides being part of the design team of the Original Cub Cadet and having a hand in the design of the 70/100 and some larger IH tractors, Harold was also responsible for the Outdoor Power Products, which included the Cub Cadets, in the early to mid 70's and later had a hand in the transfer of ownership of the Cub Cadet, but I've never seen or heard a price stated.
S

I'm getting ready to install a new PTO clutch on my 71. I read Charlie's CUBFAQ under "How do I adjust my mechanical PTO" but the manual pages he shows skip from page 2-69 to page 2-71. Is there a page missing, or was there just a girlie picture on that page or something and he didn't scan it? Any input appreciated. No offense Charlie.
M

PS: Manuals are available from one or more sponsors.

Rich Julian - HEY LONG TIME NO POST!!!! Welcome back. Rather than look at what parts you can use off the 8hp on the 12hp, yOu should be looking for a blown 12hp K301A to convert the AQS back to the S/G version. YOu can use the S/G off the 8hp but you'll need the 12hp mount for it. You'll need the flywheel and shroud, and air cleaner as well. I believe you'll be able to use the PTO clutch but you may have the thinner clutch disks, which should still work for a while. There must be a blown K301 around someplace that you could get for reasonable $$$.

Richard T - thanks for the black engine compliment. As for the broken idler pulley and spring - geez, 3 more years is pretty good in my book. So what if you gotta work on it a few times a year - what else would you be doing? (And what are those big tire tracks I see in your garage???). 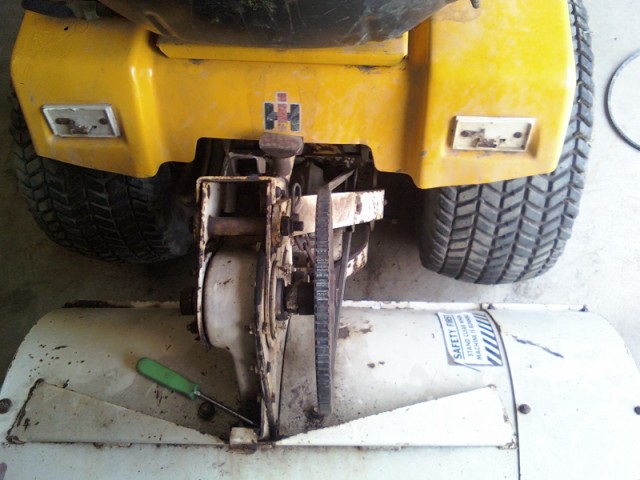 Are both the left and right lower arms in the same holes that line up? That's about the only thing I can think of that would cause that bad of misalignment, other than something being REALLY bent.

yep there in the same holes... i even tried putting them in different holes to see if it helped... it didn't!

hey! off topic i know but my cub website... i wanted another identification page, thats what i was in the process of doing and i have several models done, but i tuckered out... im looking for someone who shares the same passion for these machines to put some time into the site and finish it, its a very easy system to use, very little technical know how is needed. the site is paid for and hosted by me but i just dont have the time to finish it, so if someone is willing to step up to the plate and run it or at least help finish it id be mighty grateful as im sure many people would be to have a functioning identification page again! if anyone is interested drop me a line, [email protected]

heres the address of the site {www.IHCC.us}

matt s is the belt riding on the arm? It looks like the whole tiller is cocked to the right,

are you sure you bolted it up correct? what model tiller is it ?

I will check my tiller and post a few pics tomorrow morning when i get home from work.

Matt S.
I'm bettin that the gearbox mount or the lower fork arm/mount are bent or tweaked just a tad.

Jeff B.
That's a #1 with one side extension.

its a 1A if that makes a differance??? i dont know to be honest lol

no,,, it should hook up the same I just wanted to confirm and charlie also pointed out a likly problem

Hydro Harry! How are ya buddy? I still have that 1450 I bought from you when you moved. It's my main lawn mower with a 50" deck on it. My 86 was performing mowing duties for around our Christmas trees out back.
Yah, a 10 or 12 hp from that series would be an easier swap/fix than the 12 I have from the quietline series. I just need to find one.

Here's the old girl being brought back to the barn... 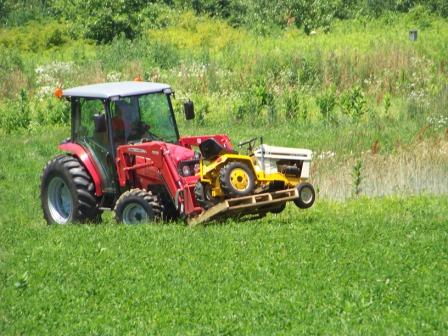 Rich J.
If ya need some help putting it in the loft, just holler! 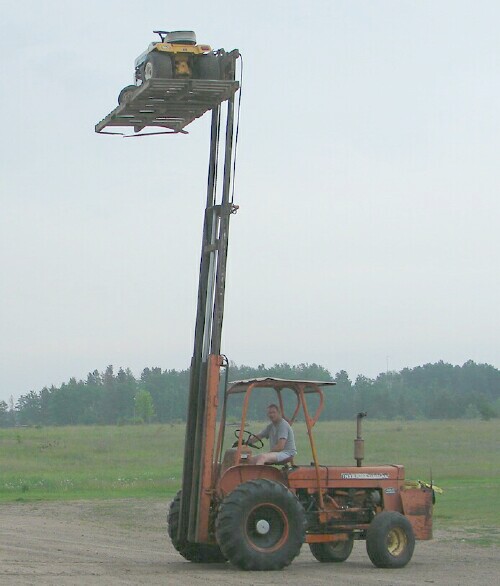 Matt,
The tiller I have mounts the same... You 'prolly have it hooked up right, But the tiller was ridden hard and put away wet

in its life... I'll be that you have several oval holes in it causing a cumulation of tolerances to add up to a major misalignment. Short of rebuilding, I would suggest getting new hardware, tightening the mounts up at the top of the gear case, and perhaps installing bushings to tighten it up...
R

Thanks Charlie, but my loft isn't that high!

PAUL B. - Thanks for replying about the CC IH to MTD sale. I'll do a search and see what I find. Stuff like that should be on public record.

RICHARD J. - Sorry to hear about the little K181's demise. They normally don't gernade like that. At least you "rescued" it with a red tractor.

Matt S .. I think every one is on to something from bent parts to worn out holes 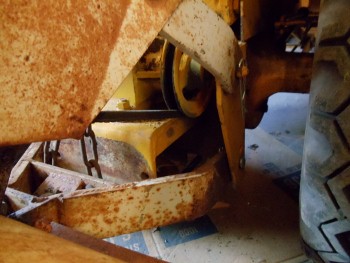 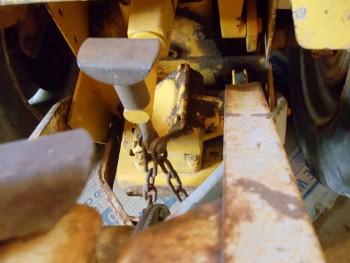 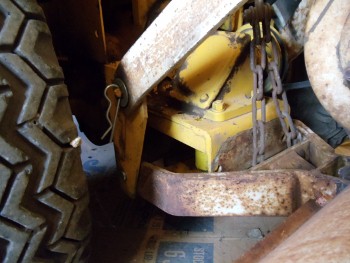 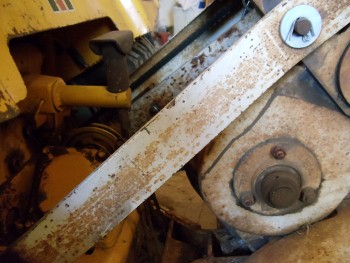 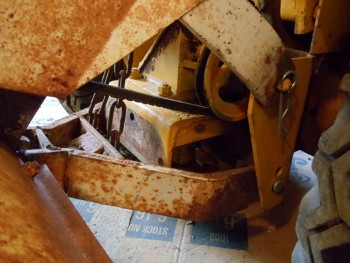 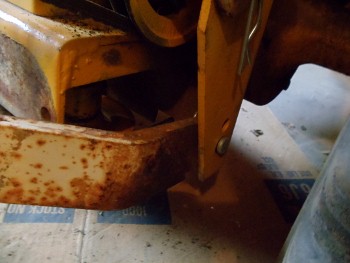