There are no washers on the isomount bolts. Just 3/8-16x2.25" bolts and all-steel locknuts.

The engine bolt is a 3/8-16 bolt with a lockwasher, despite the picture.

Time to cough up the bucks and buy the book! Page 1-8, chassis service manual.

You need the cradle, two snubbers and the package of four isomounts. That's it. Cut the back crossmember off as
it will interfere with the blower housing - it will be plenty stiff with it cut off.

Here is a useful modification for owners of Cub Cadet "Quiet Line" series tractors with rubber mounted engine.
The benefits of this mod are longer rubber isolator life and engine mounting bolts that won't vibrate out. I was told
this by a professional Cub mechanic who stated there was an IH service bulletin that encouraged this mod to be
performed anytime the rubber mounts were replaced. The typical failure scenario is that the mounting rails, being
independent of each other, tend to rock side to side. This puts higher stresses into the rubber isolators and also
causes the engine mounting bolts to work loose, further aggravating the problem. The fix is to rigidly link the two
mounting rails together, thus forming a more substantial cradle for supporting the engine. It involves welding a
8.75 X 1.5 X .25 flat stock steel bar between the mounting rails as shown. I used the oil pan as a fixture to hold
the mounting rails at the proper spacing.


The engine needs to be slid forward to disengage the drive shaft when installing or removing engine. You
can also tilt the engine and disengage the shaft after first removing the screws in the flexible coupling discs and
allowing the drive shaft to pivot in the ball joint a few degrees. Believe me, it still goes together, just not quite as
easy. I don't think there is enough room to put the connector bar on the flywheel side. It's more effectively
located at about center span, and that is where shown.

I think McGiver is gone for couple weeks so I'll try to help as I can. The rubber iso-mounts are all the same.
The iso-mount bar are specific to left or right side. Also, don't get confused with the "rubber snubbers" which
are mounted at the front of the iso-bars on the underneath sides. The service manual shows both the mounts
and the snubbers within the 1st few pages. As for the motor appearing cocked I'd guess it is due to the
iso-mounts. They are not completely rubber. They use a metal support for each of the rubbers
(there are 8 in total - 2 on each bolt) similar to an auto shock obsorber. The metal support is butted end to
end and these ends tend to wear down, crack, flatten, etc., so all you're left with is a washer and bit of rubber.
This would allow the motor to cock slightly. I wouldn't be to concerned because the rubber coupling on the
drive shaft connection will allow for some cocking. If you've grabbed hold of the motor and tried to "roll" it
side to side this will tell you if the mounts are bad. Another possibility is to look at the underside of the motor
from the front of the tractor. You should see some space between the iso-mount bars and the top of the front
axle channel. If there is no space the mounts are 'shot' and the bars are riding on the frame probably allowing
the oil pan to rub when the motor is running. In general the iso-mounts are only good for about 5 years, maybe
a little more on the 10 or 12hp motors and less on the 16hp. I think IH could have used a bit harder rubber to
make'm last 10-15 years, but I don't know all the engineering stuff behind it of course.
Hope this helps,

Like all CC's, the 1450 is a great machine. The only thing I would check out with a quiet line that I wouldn't on
others is the engine mounting. Make sure all four mounting bolts are in and tight. People talk about the mounting
rails collapsing in from the vibrational wear on the isomounts. The rails can eventually touch the front axle cross
member and wear grooves into it. Well, I have thought about this and after investigation of my recently refreshed
1450, I believe the major cause of this is loose or missing engine mounting bolts. If the bolts are tight, they hold
the rails parallel and flat against the oil pan. This means that if the bolts are tight, the rails can't collapse inward!
But, these Kohler K's are shakers, especially the big ones. The bolts get a little loose, the engine begins to play,
the oil pan is made of aluminium (weak spot) so the play causes it to wear, the increased clearance loosens the
bolts more, the rails slowly collapse in. The cradle option you see these guys talking about keeps the rails from
collapsing which prevents the rails from coming in contact with the cross member until the isomounts are really
bad. Removing the twisting stress also prolongs the life of the isomounts. My 1450 had 2 engine mounting bolts in
it, one was even tight! One of the missing ones had snapped off in the oil pan. I used a left hand drill to remove
the broken one, had to weld-build the mounting surfaces on the oil pan (could have bought a new pan for $50, not
a bad price for piece of mind), replaced all four isomounts and two snubbers. I bolted the engine to the rails with
lock washers and Lock-tite at Scott Madsons advice. Next time I replace the mounts, I will do what Bryan did.
Now, I'm not saying reconsider your purchase, on the contrary, you now know how to fix it! Use this to get a
better price! Get us some pics of that beast either way!

The unresolved force developed by the internal reciprocating and rotating components is shown in the plot.
Knowing these forces in the vertical and horizontal axes and the mass of the engine structure (about 120 lbm),
one can calculate how much the engine moves in the mounts. This works out to be about .014 inches of vertical
and .006 inches of horizontal movement. The existing mounts will easily absorb this amount of deflection, yet the
lower mounts ultimately fail. It finally dawned on me that the weight of the engine is what ultimately yields the
lower mounts, compressing them into useless blobs, while the upper mounts appear to remain as new. My
brainstorm was to install springs around each of the 4 lower mounts, each spring exerting 30 lbf each, thus
offsetting the weight of the 120 pound engine assembly. I found suitable springs from a specialist manufacturer
and recently installed them on my 1250, along with 4 new lower mount rubbers. What a difference! The mount
rails now are centered in the mounts such that both absorb vibrational forces equally, now that the engine weight
is effectively "removed" by the springs. The isolation charateristics are unaffected by the springs, and full
smoothness of the rubber mounted engine is realized.

I'm very pleased with the outcome but want to test it for a while before making it available to other interested
Quiet Line owners. If I get enough takers, I would purchase the springs in quantity such that the savings would
be passed on. They cost me $10 each for a sample size of 10, which is a little high.

For any of you QL owners who think you would be interested in this mount fix, e-mail me directly and I'll start a
list. Meanwhile, I'll keep you all updated on how the testing proceeds. 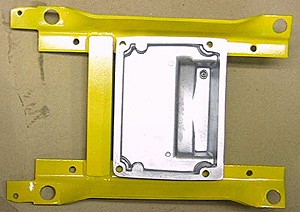 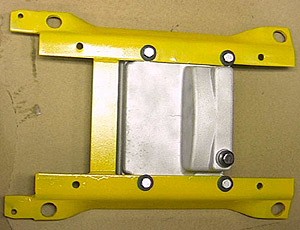 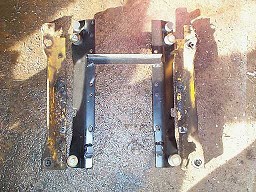 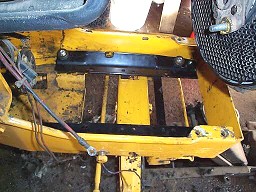 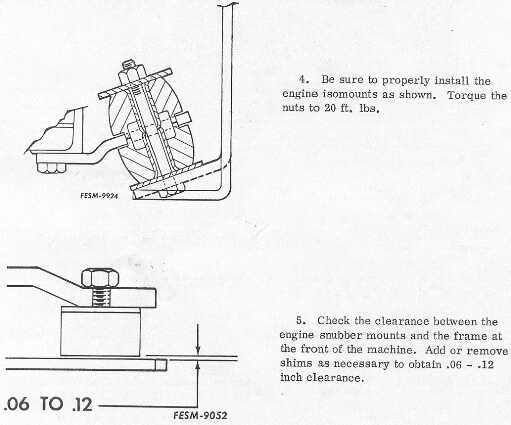 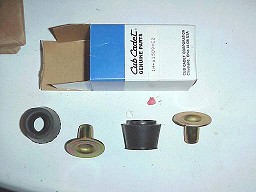 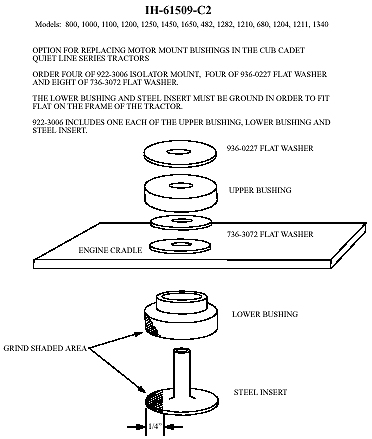 S
Rubber buttons on all 4 corners of engine mount 1450