Another local distressed Cub. The original Magnum 12 starts and runs excellent with no smoke. Missing some parts, and needs TLC. Sheetmetal fits great. Came with a new Carlisle front tire and new battery. 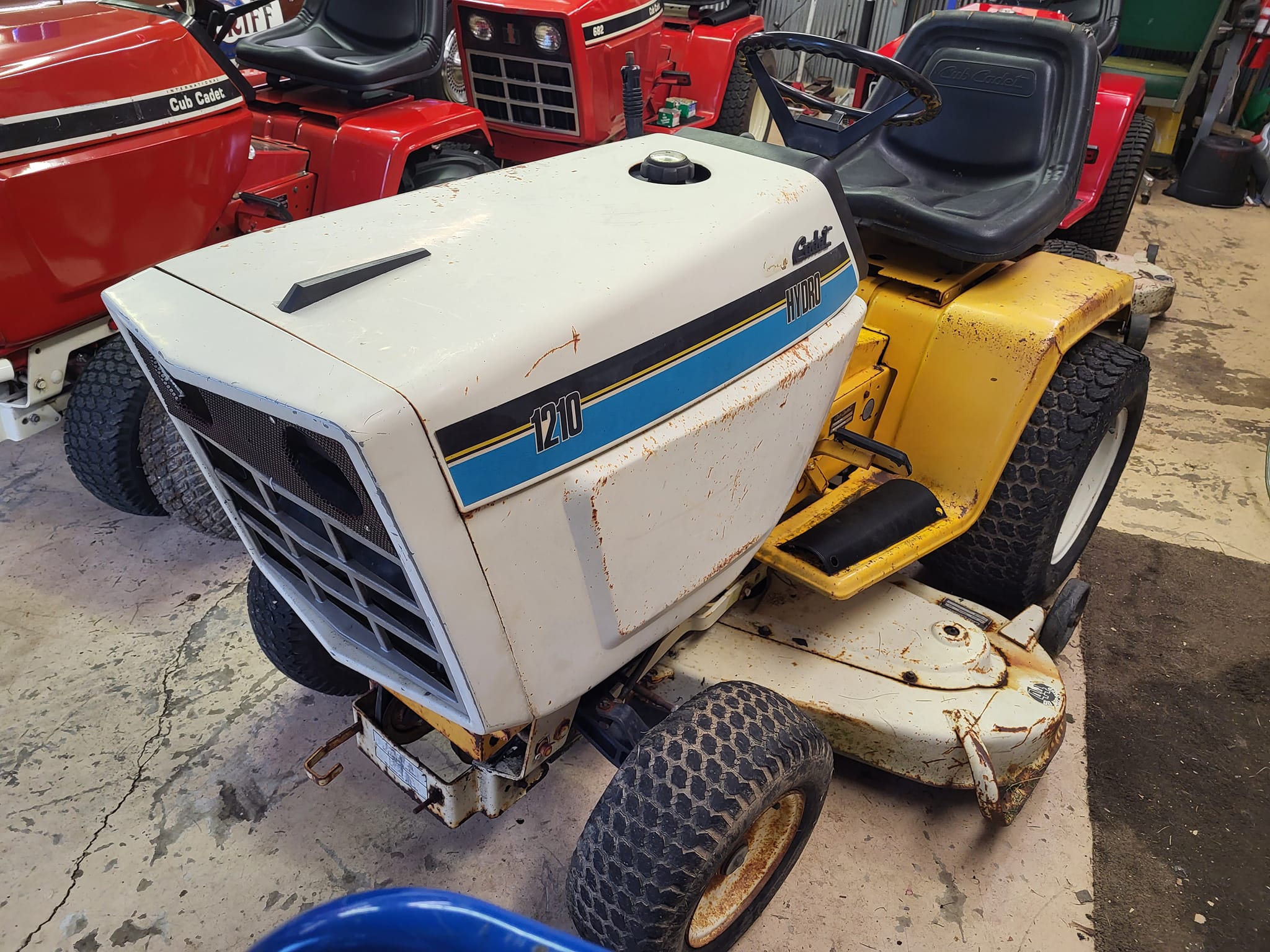 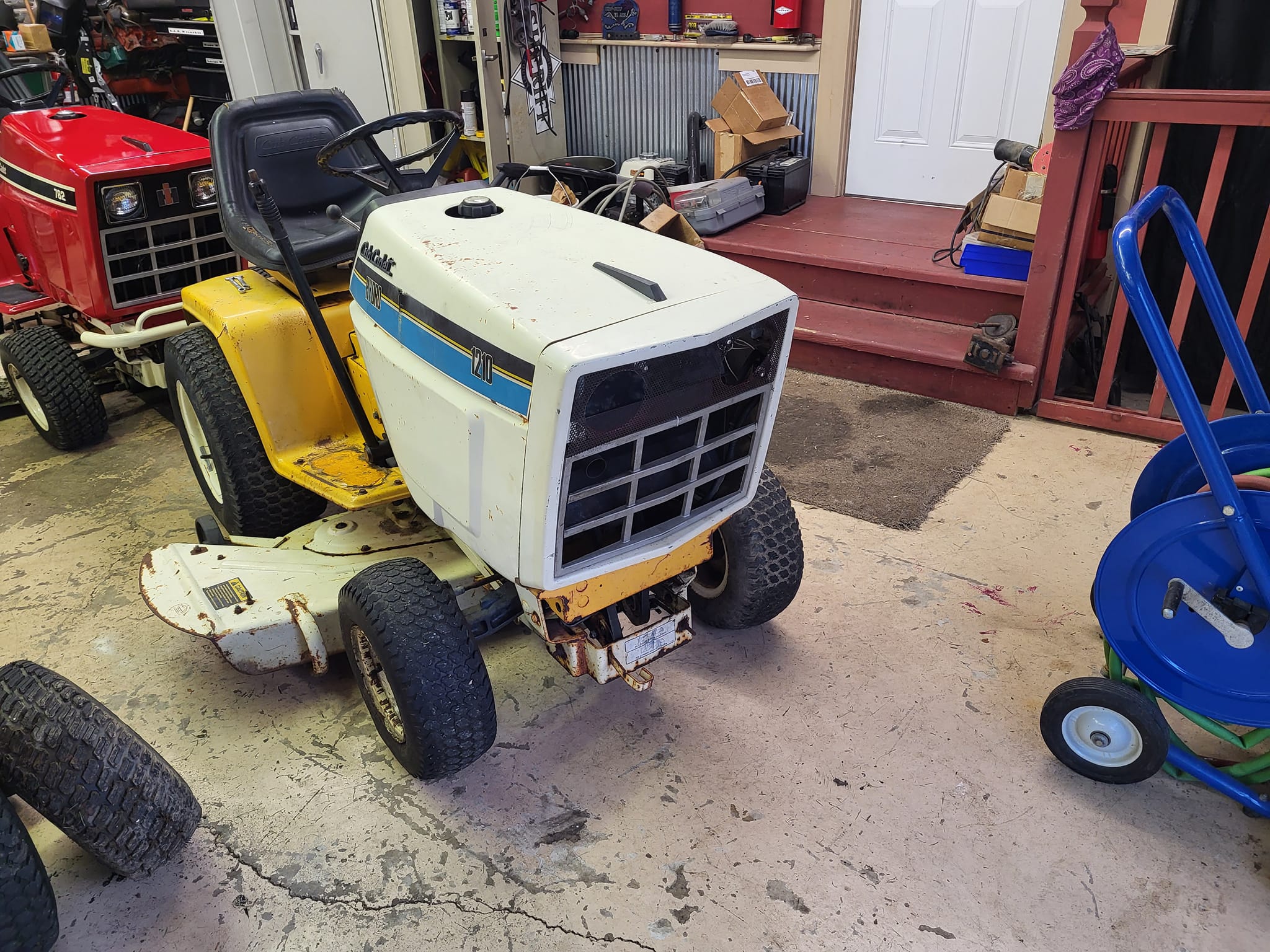 Changed the engine oil, which was nasty. Used SAE-30 Cub Cadet oil. It purrs like a kitten. I adjusted the choke and throttle cables. I found some electrical issues, so I will need to go through this thoroughly to get everything to work again.

Is the model 1210 a parallel/sibling series to your Red Fleet? seems to have a similar shape/profile. It is in good company now!

I fixed the lighting circuit and the charging circuit. Bad wiring and dirty connections were the only issues found.

The manual deck lift float pin was snapped off. I removed the release button, drilled it out, and tapped it with a 10-24 tap. A NOS pin threaded right back in. I'm waiting for the little black vinyl cap to finish it off. 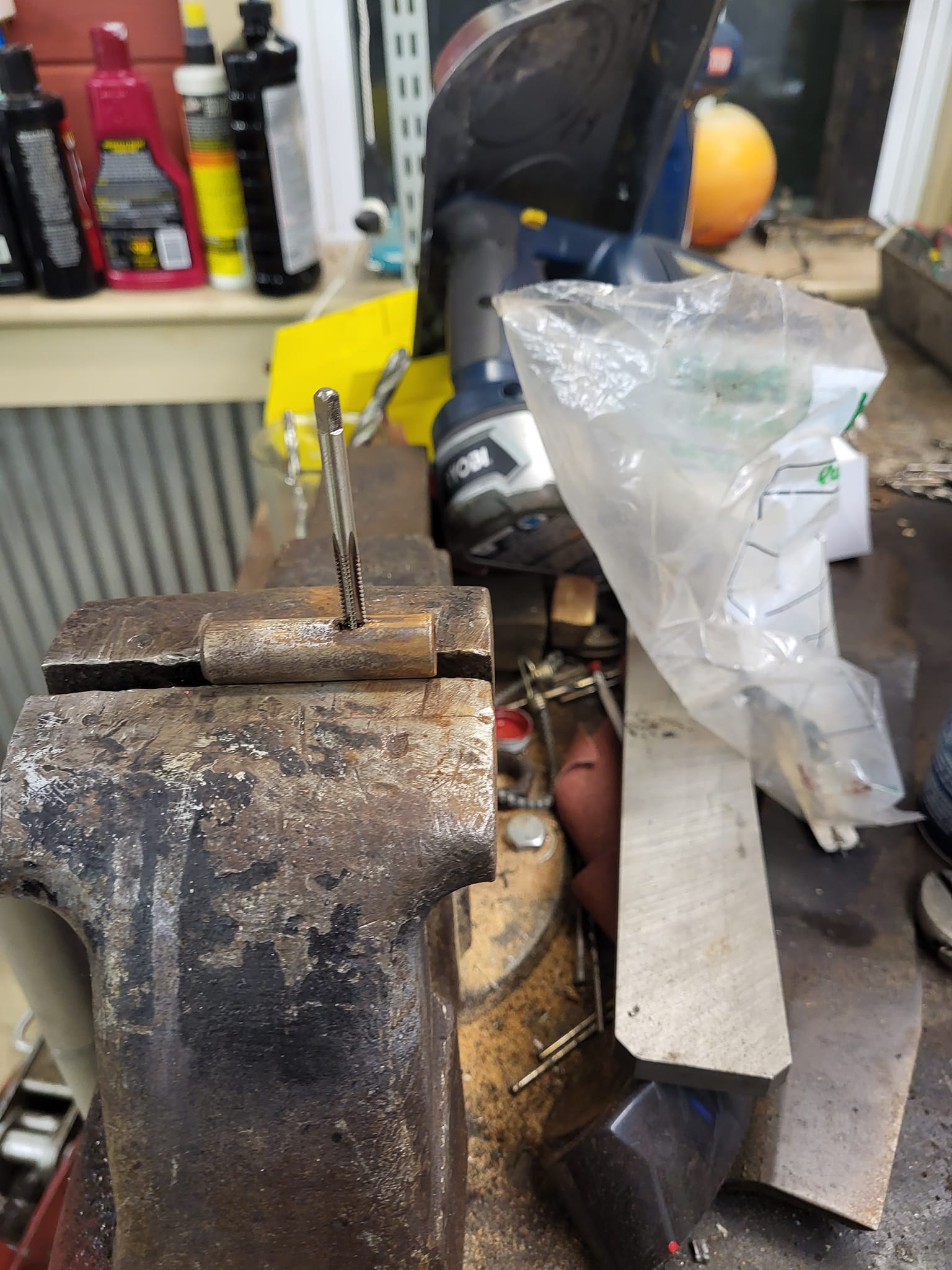 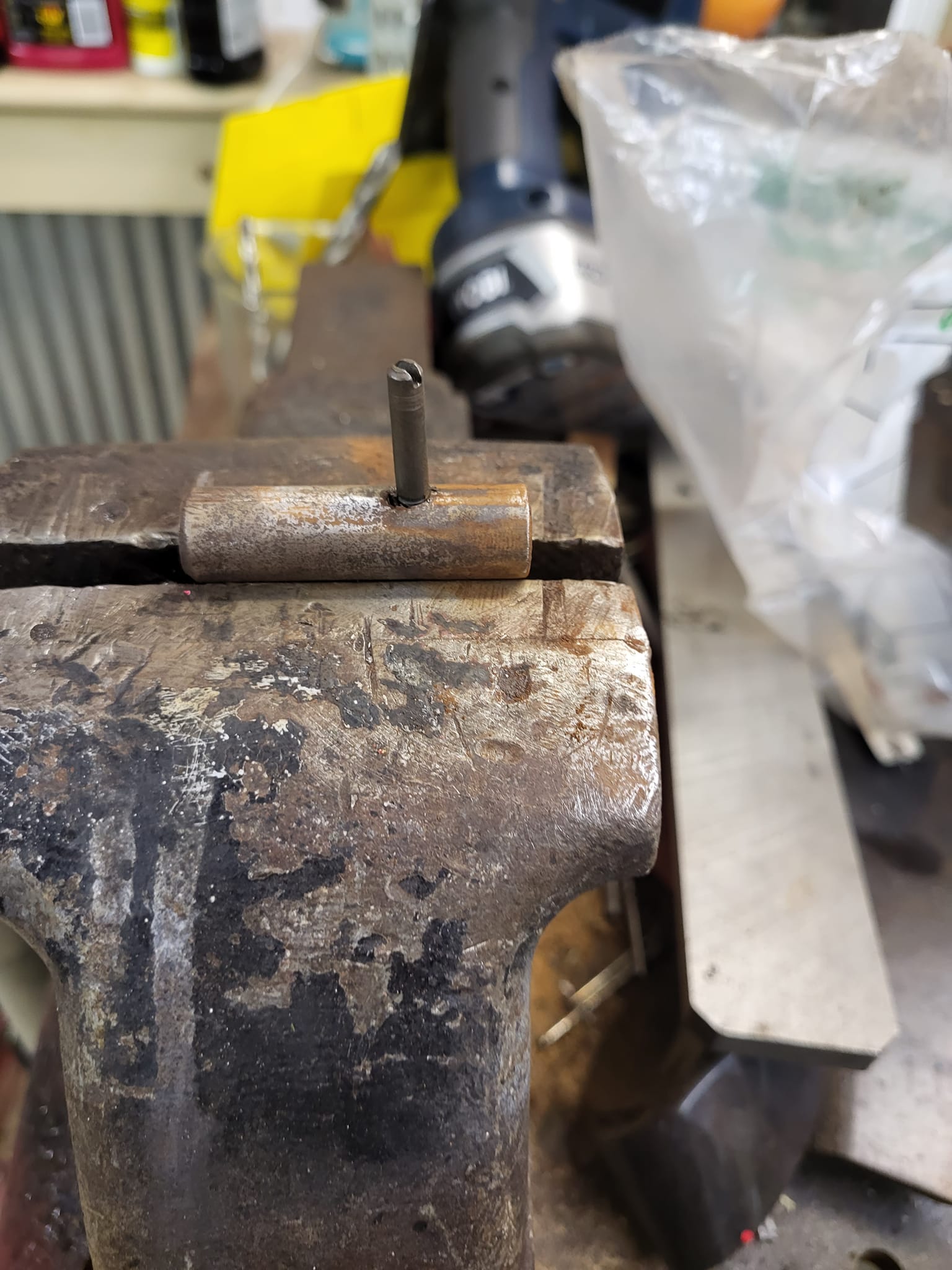 1811, is that the “lock in place” function of the big implement lift lever handle?
i don’t recognize the pieces.

Parts 3 and 4 are what is shown on the vise. I am waiting on part number 16, which is a vinyl cap that slides over the pin. 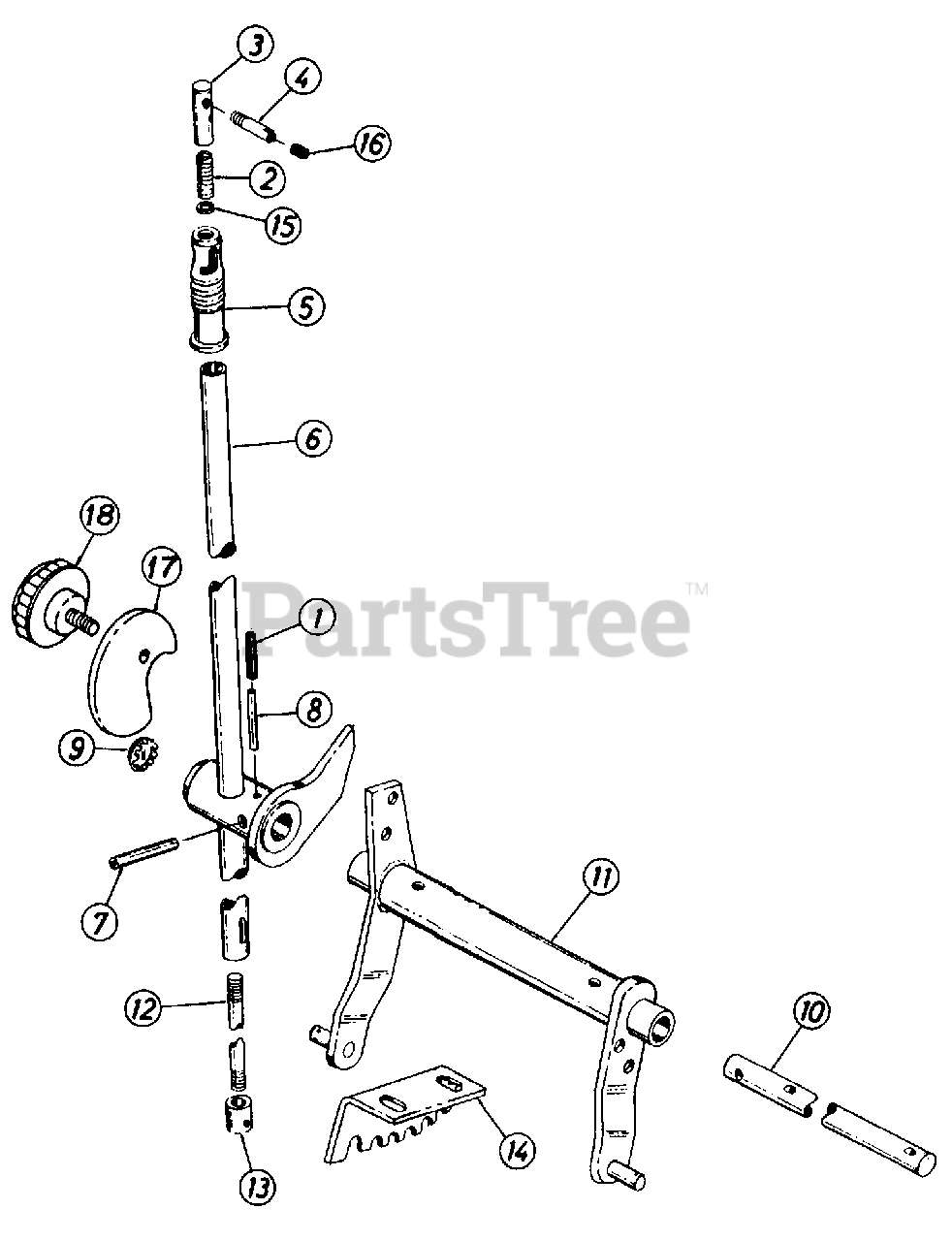 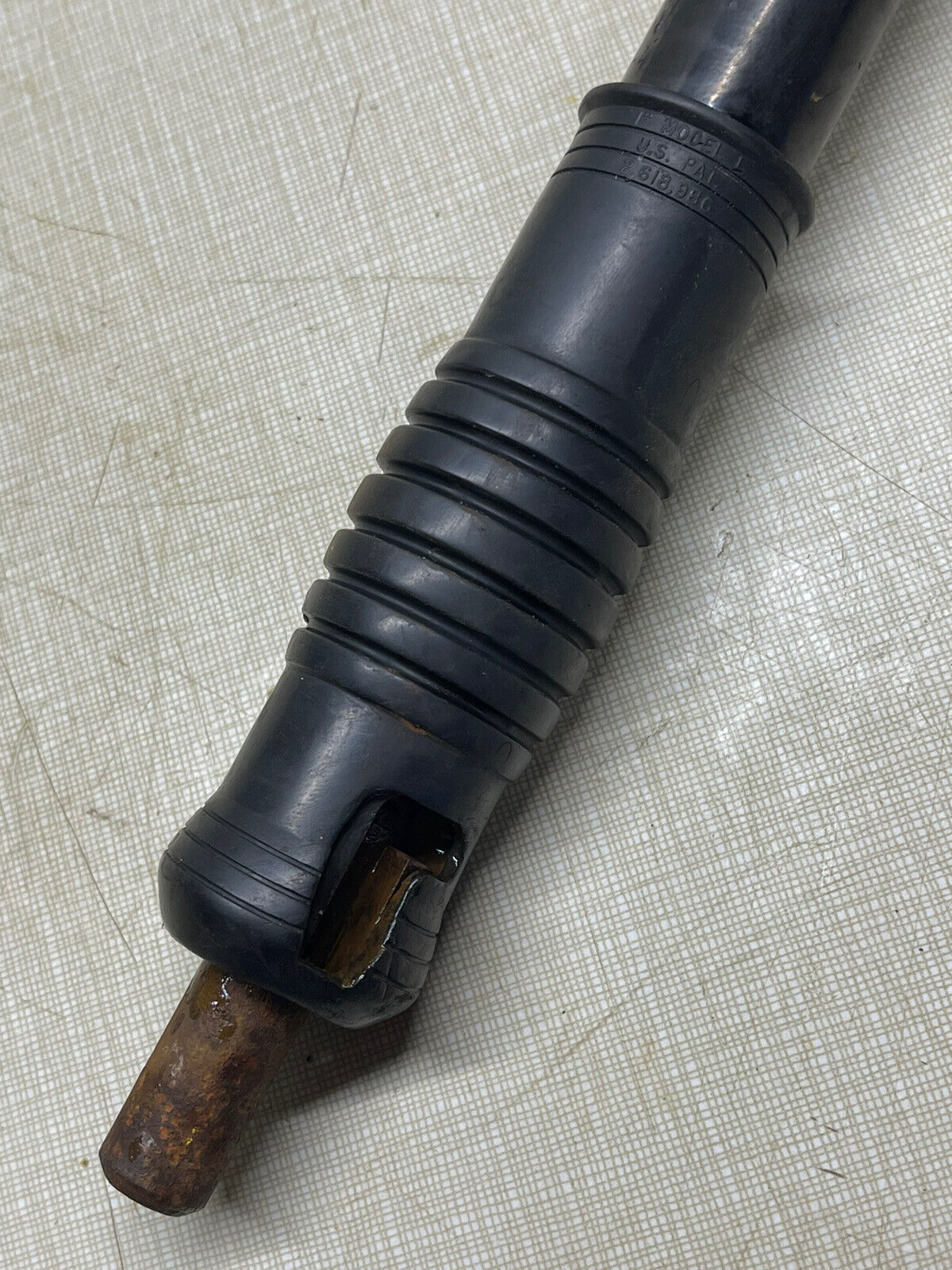 thanks!
such case studies are a good learning opportunity.

I received a bag of 10 thick vinyl black caps for the float lock pin. Cub part number 720-3014 is NLA, but these are virtually identical in appearance, AND a heck of a lot cheaper that they were when you could even locate them. A pack of ten 1/8" OD was $7 plus tax. Through Cub they were $4 each for my other two manual lift tractors. 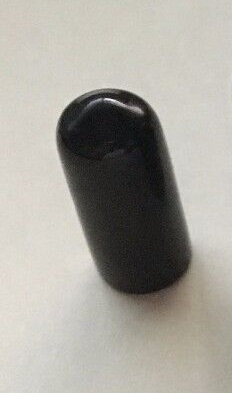 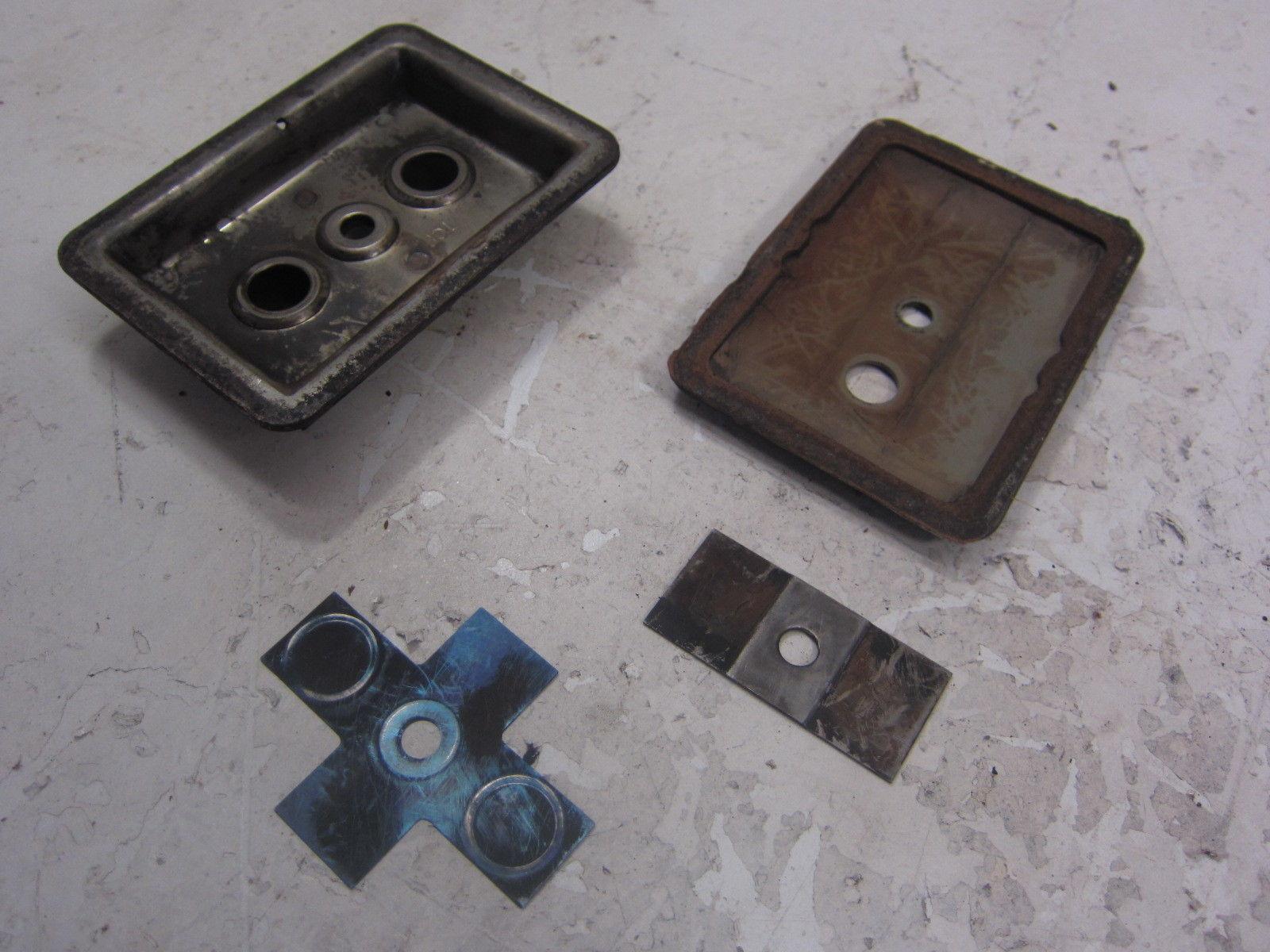 The engine leaked a good amount of oil. It originated from the valve cover. Someone had been there before since the reed valve and it's retainer were MIA. Also the cover was bent. A good used one was sourced. I replaced all the gaskets including the cam gear cover and fuel pump,and the breather filter. No more leak after an hour of run time.

Added all of the light hardware, bulbs, and grille. Also, a shot of the completed float pin. 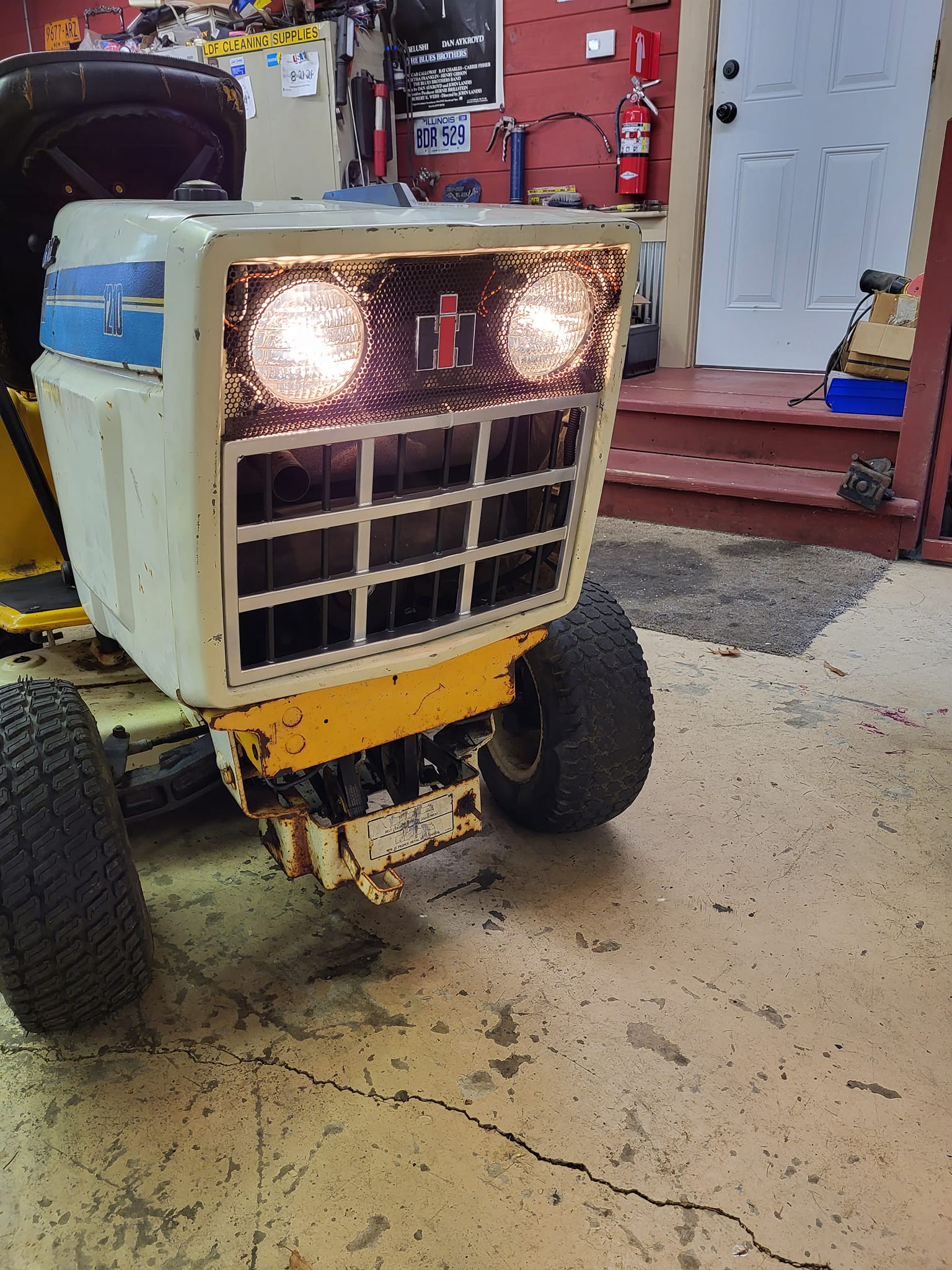 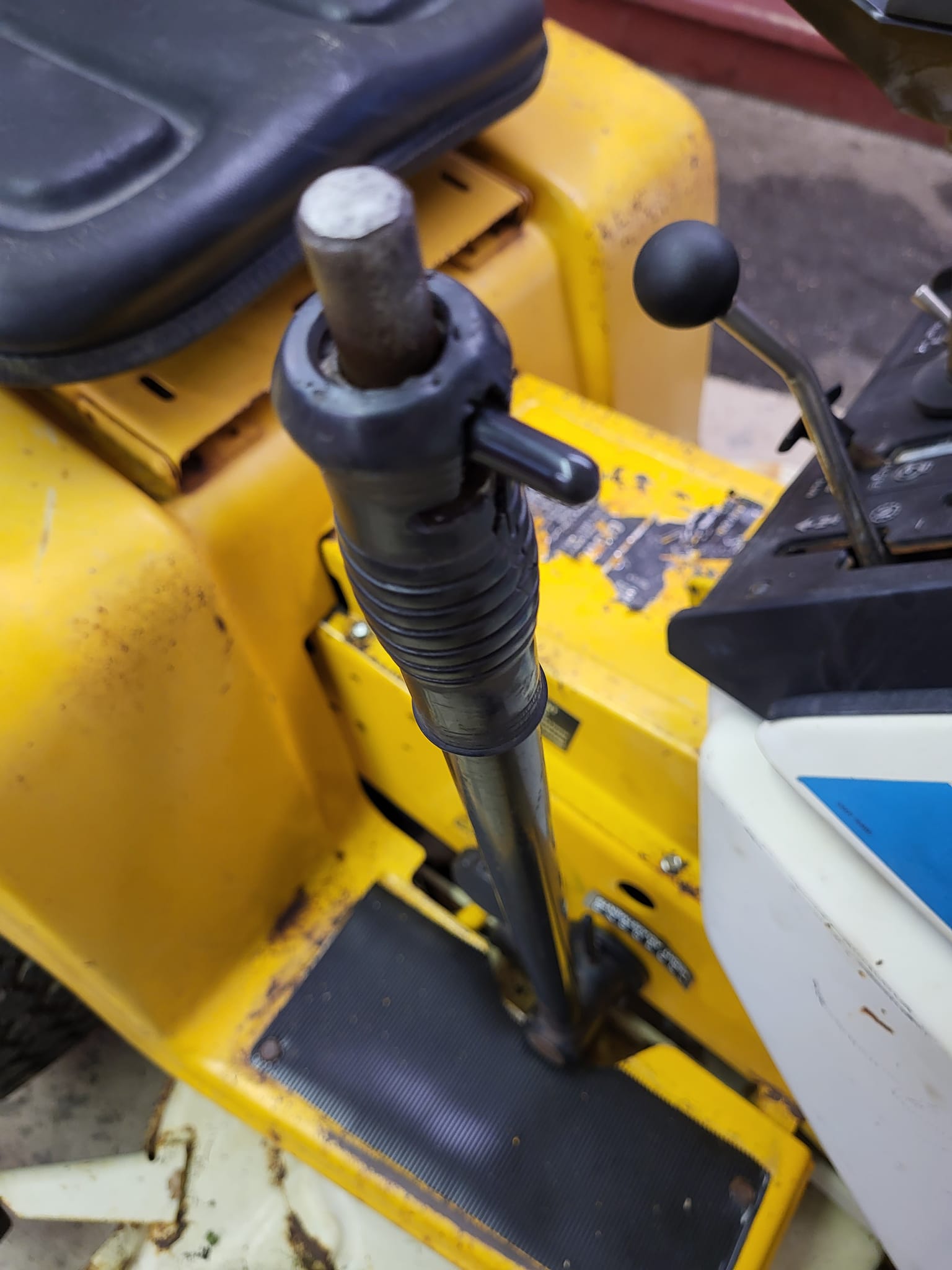 How is the dash on this 1210? They all seem to mysteriously crack around the mounting screws.

Those areas are good. It does have some breakage around the outer edge. Also, the previous owner drilled a hole in it to place a cheap toggle switch to engage the PTO. Fortunately, he did not snip any factory installed wiring. However, he ran a single 12ga wire directly from the battery to this toggle switch with zero fusible protection.
Last edited: Nov 4, 2022

️
why did the juice that was flowing just
STOP?

I bought a new Carlisle front tire to match the other one the previous owner had purchased. I had the original Goodyear removed and this one mounted with a new valve stem. The local tire shop had it done in less than 10 minutes. 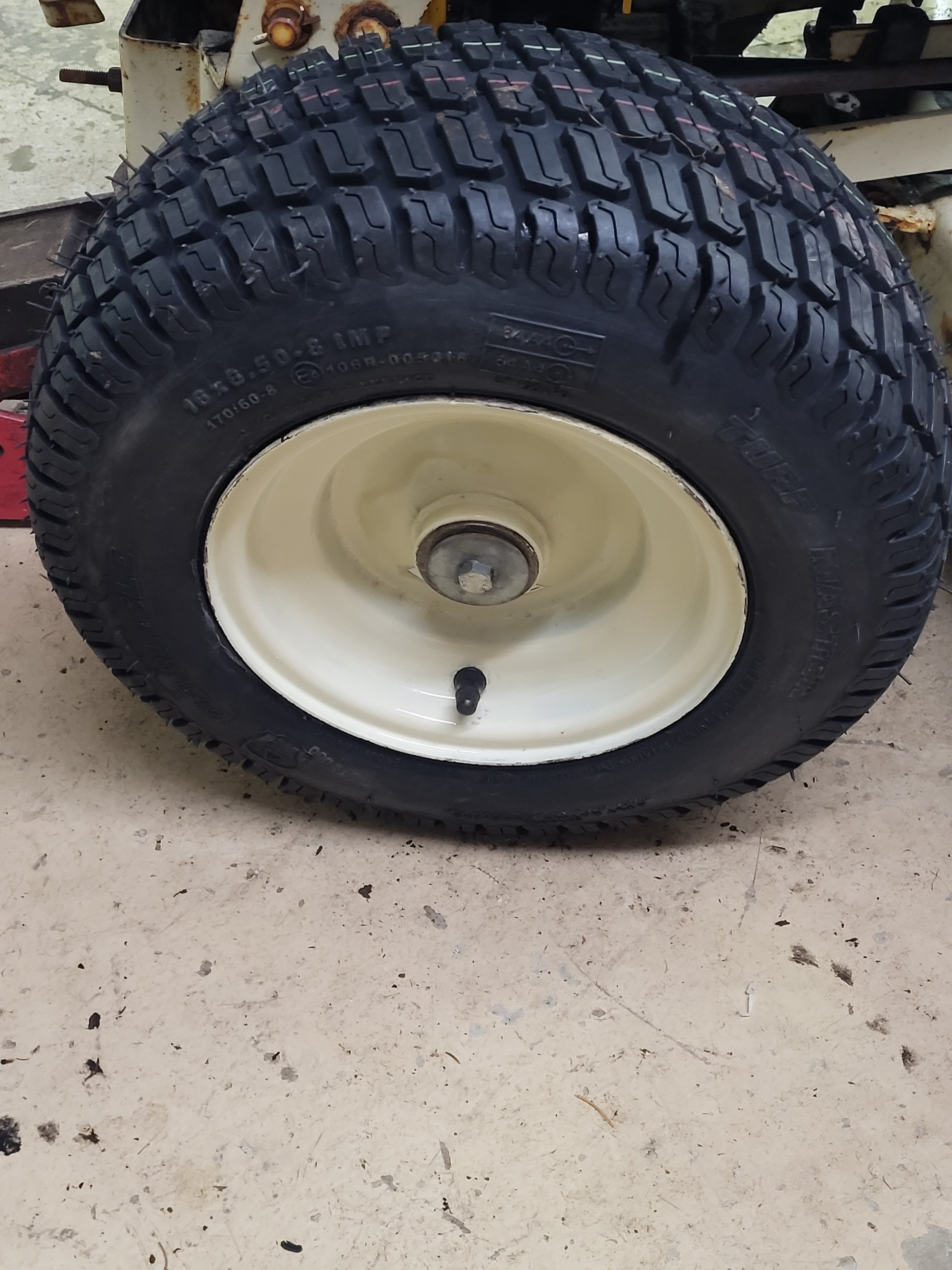 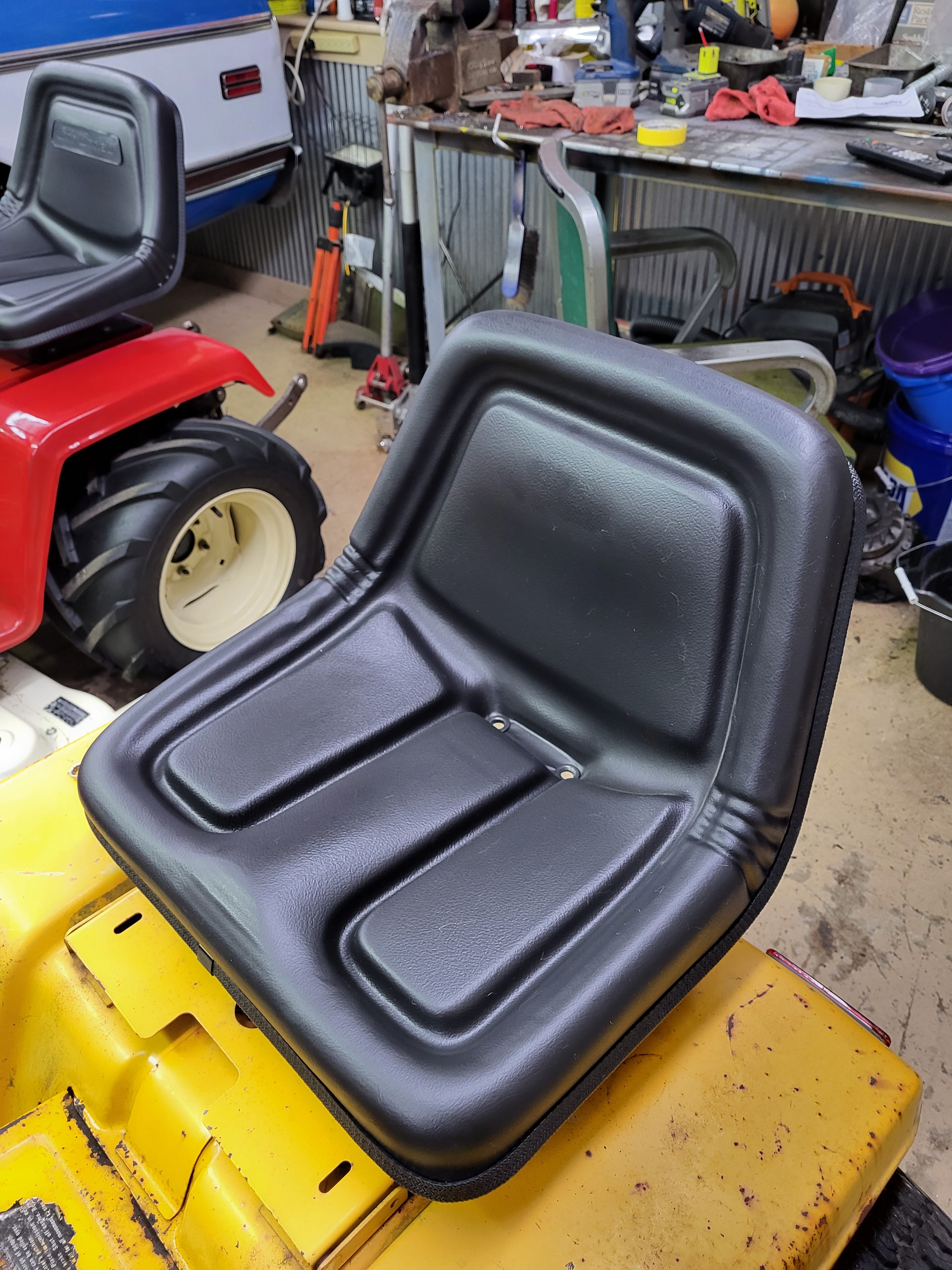