I've posted August 19, 2012 about finding unexpected wear at the front flex disk connection to the engine on my re-powered 782. Since I had to pull the M18 out last weekend to take a look at the flywheel (see M18 Starting Problems in this same section), I took a closer look at the worn components. 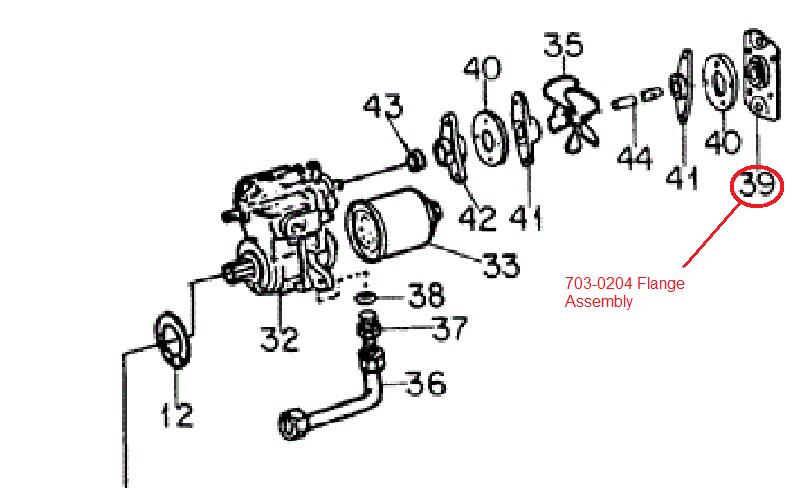 I posted earlier that I was surprised to find the "Flange Assy" come apart in my hands when I removed the M18 engine that had been running in the tractor for over a year, or about 60 hours.

I was told by Matt Gonitzke, both the Bluniers named Steve, and others that "something wasn't right." I thought at first that the engine might not be at the right height, but I was assured by Matt Gonitzke and Ken Freeman on 8/21/12 that the height of the spacers should 0.469" or slightly less than 1/2", not the 3/4" given on Parts Lookup. My spacers are so close to 0.469" that I would have to shim them to get them dialed in to the 0.010" which tells me that the height of the spacers is not the issue. (I will post pictures tomorrow with measurements in order to satisfy the gear heads among you).

I did recall being concerned about the apparent looseness of the cast piece on the engine end of the drive shaft. It has never seemed particularly tight to me, and I snapped one of Charlie's Spirol pins in it at about 50 hours, again, an unexpected event. So I purchased a new cast piece to replace the old one. 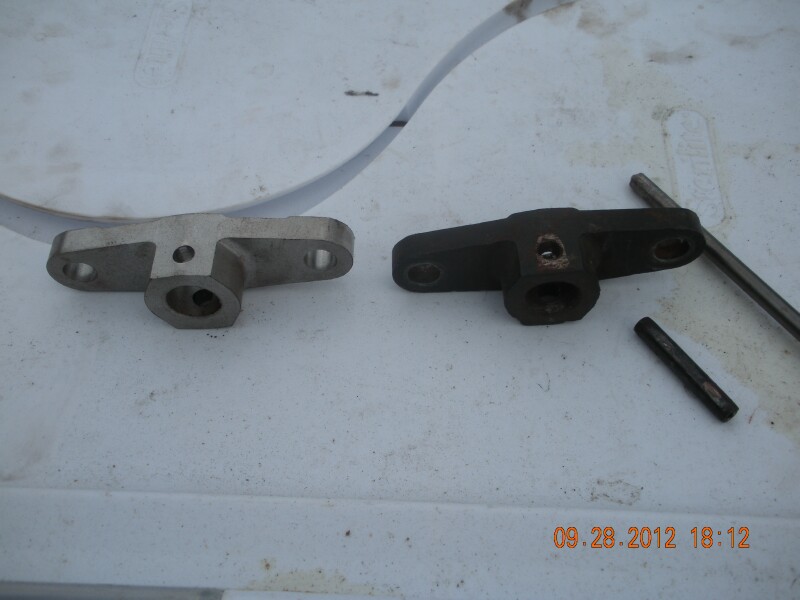 (Note: I had a difficult time getting this particular Spirol pin out when I replaced the drive-shaft; the original had been in there for almost 30 years, and there was no "looseness" apparent in the ancient piece.)

The trouble is, the new piece is nearly as loose as the old piece! 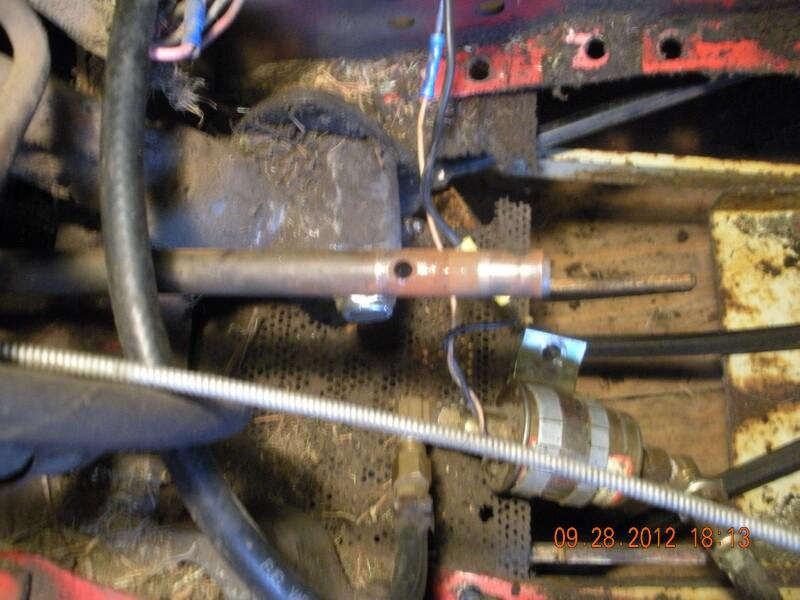 I also don't see a lot of wear on the drive-shaft itself.

I don't think the cast piece is the problem.

Finally, I examined the "Flange Assy." 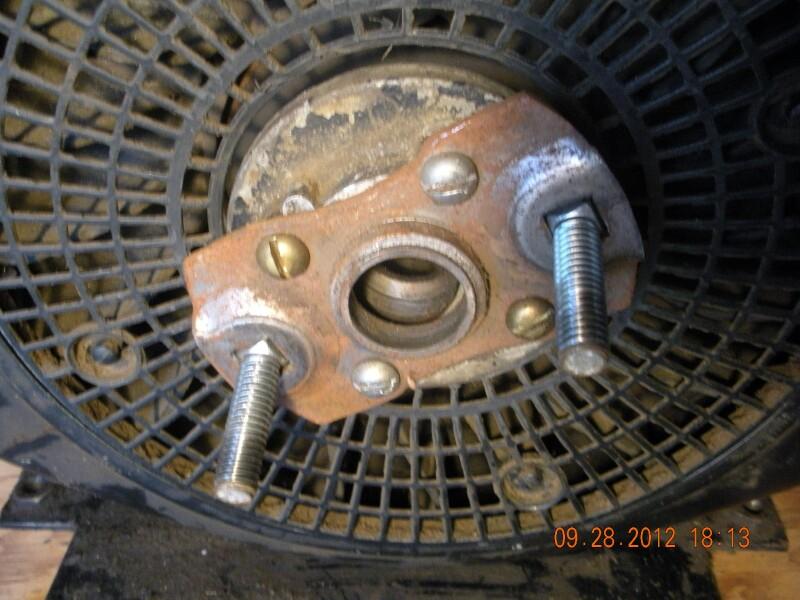 I noticed that until you pull the drive shaft back (or the engine forward) the Flange Assembly seems to be fine. 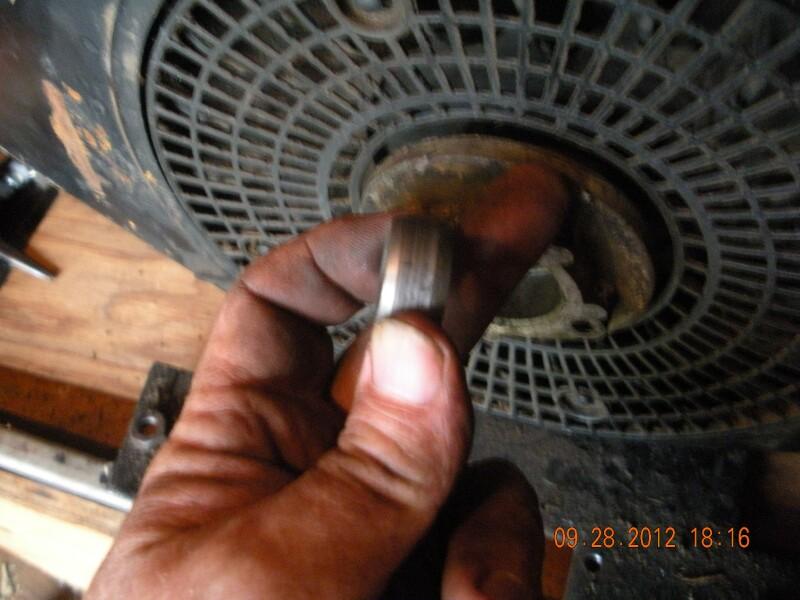 What seems to be happening is that the driveshaft is rocking backward for some reason and pulling the spherical bearing back out of the flange. If you don't try to move either the driveshaft or the bearing, the "Flange Assy" looks (and acts) fine.

What could be causing this sort of wear pattern?

I know the engine is held fast to the frame and it is not moving.

Theoretically, the drive-shaft should slide in the bearing, and not pull the bearing out of the flange.

Is this normal, or should I be checking the input to the transmission or the bolts that hold the differential to the frame?

Not to start something, but much earlier in my reconstruction, I think Matt Gonitzke stated categorically that the pitch of the driveshaft into the engine should be slightly slanted, I think he said 15 degrees. Big Steve Blunier is adamant that after 45 years of working on Case/IH tractors that the drive-line especially needs to run "straight and true" (8/19/12).

It seems to me that a slight angle would be appropriate, perhaps the angle (and hence the height of the spacers) is more critical than I thought.

Another way to explain the wear pattern is that the engine is not quite high enough, and thus the bearing can't quite turn enough to wear evenly, so it wears unevenly.

I can't believe the engineering of this connection is this precise, but then again, I know that engineers care about just these sorts of things.

Any insight is welcome and appreciated.

Jeremiah i may be able to help you ,all send you a note .David

David: Thanks. Send the message to the e-mail in my profile, I'll get it on my phone as well as my computer.

The engine is tilted about 3 degrees...not sure where you got 15 from. Both the engine and trans are tilted, so the input shaft, crankshaft, and driveshaft should all be coaxial.

How is the coupler at the rear of the driveshaft? Is the rearend bolted down securely? Did you lubricate the end of the driveshaft and the ball of the bushing before assembly? It looks pretty dry and rusty in there...

Matt: Whenever you talk, I'm listening. I just don't remember too well.

I "recalled" 15 deg, obviously CRS struck hard on this one. I did remember correctly that you told me it wasn't "straight on."

You need to help me understand your statement, "Both the engine and trans are tilted, so the input shaft, crankshaft, and driveshaft should all be coaxial."

Thinking out loud: if the engine, driveshaft, and input shaft are "coaxial," or "have the same axis," where does "3 degrees" come in?

Are you saying that the whole setup, engine-to-shaft-to-trans should be on the same plane; but 3 degrees canted from an imaginary ground elevation?

As far as the lubrication goes, NO, I didn't lubricate anything. I didn't realize the assembly called for lubrication. What do you recommend?

I AM interested in your response, you have proven to be a faithful guide in the past (even if I gave you a lot of guff to begin with, you've proven yourself right in almost every instance).

You answered your own question

All three are three degrees to some horizontal reference plane. I typically use a light coating of grease on the ball and end of the driveshaft. It may not say anything in the manual but it's still a good idea.

Now that I think about it, I believe the "3 degrees" is stamped into the motor mounting plate.

I'll check the thickness of the spacers, check the bolts on the transmission, and lubricate both the balls and the shaft on both ends (boy, that doesn't sound right!). 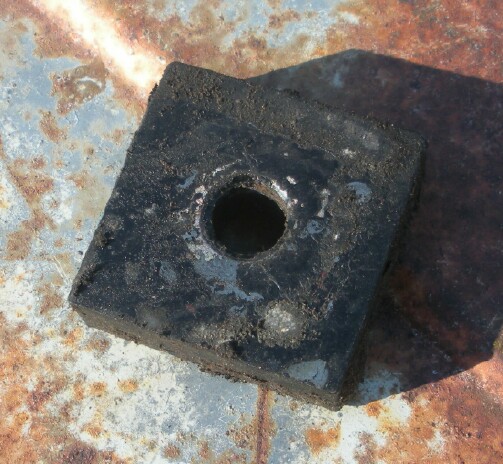 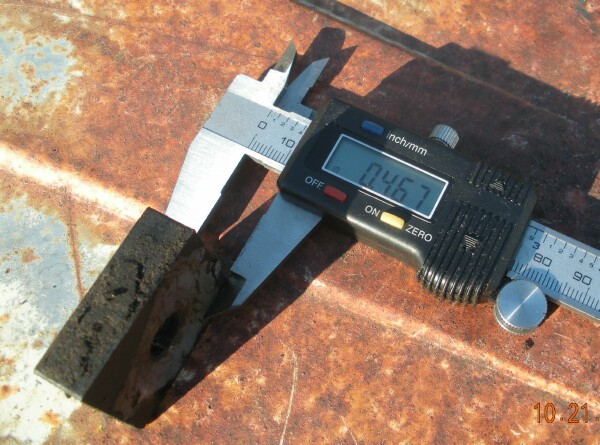 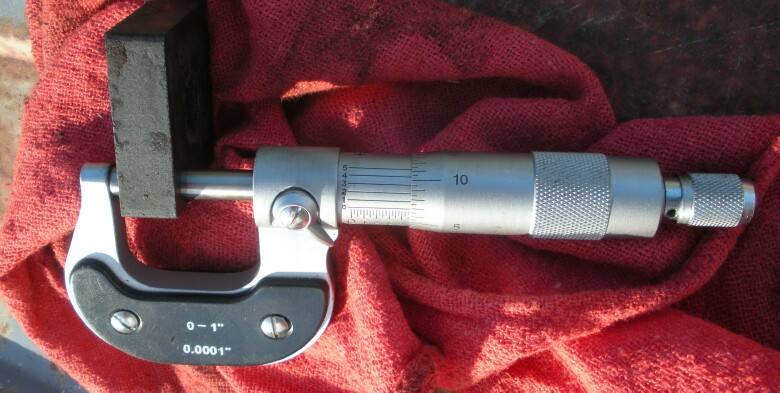 Apparently there is enough variation in the alignment to cause the abnormal wear on the so-called Flange Assembly; it is not simply a matter of lubricating the end of the drive shaft --there is just enough "bend" in the drive line to wear out the swivel prematurely on one side.

So the engine is not yet at the proper height, and the drive line not quite "straight and true" per Big Steve Blunier, and the 3 degrees from horizontal per Matt Gonitzke is not maintained.

Darn this thing is complicated and precise!

I "borrowed" a swivel bearing from an K301AQS in my possession and lubricated it with assembly grease before assembling the shaft to the engine so I could start it, but I still need to procure spacers to get the engine to a proper 0.469" height above the engine plate.

Thanks to everyone who contributed, I'll keep you posted.

Don: Perhaps someday. The assembly goes for $400 USD and I'm sure there are other costs associated with the upgrade. It is something to consider when I finally tear this thing down for painting.

I've been checking the thicknesses of various materials I might use to shim my current spacers up to the specified height; we're talking about 30 gauge material, something between the sides (0.0085") and the top (0.0142") of a Foster's "oil can." Again, I can't believe the assembly requires this kind of precision, but it would account for the wear pattern on the Flange Assembly where the driveshaft mounts to the motor.

I'll bet with the torque values required and the fact it is aluminum, I could go with the Foster's top material. At least this way, I would have a reason to buy at two (2) or four (4) cans of Foster's.

My CV shaft was bought used for $75.00 from this site in the for sale section. for the front engine connection I made up a round plate and bolted the CV shaft to the engine and in the rear I see you have the piece for that. i have the plate with the bearing here for your drive shaft and never used it. I think I will send it to Kraig so he can pass it on to someone in need.