wondering what a 62 horse all orig. in fair shape might be worth ? i havent checked numbers yet. to see if low or high SN.
as of post time. no idea if runs. a quick try and it had a puff or 2.

if all done in working cond ? left orig tho. not painting it. has the spoke rims also .
just gettin feel for waters. not even sure i will sell it as kid i grew up with. his dad worked for garden way in troy ny back in the 70s. i might give it to my buddy. no idea yet.

i guess iam within the rules. not asking for offers. just tryin to find out its worth.. but if admins dem it wrong . iam good with that. they know better then me .
D

We don't allow "How much is my Cub Cadet worth?" type posts, so why would we allow "What is my Wheel Horse worth?" posts. The reason for this is that the worth can vary greatly depending on condition, options and possibly most important, location. I'll leave the thread up however.
K

kmcconaughey said:
We don't allow "How much is my Cub Cadet worth?" type posts, so why would we allow "What is my Wheel Horse worth?" posts. The reason for this is that the worth can vary greatly depending on condition, options and possibly most important, location. I'll leave the thread up however.
Click to expand...

from post above i didnt see that. my bad this is what i read from link above. if wrong please delete the posting. no issue here with it .. but just for me i didnt see no how much is my "x" is worth in this . but i may have missed it..

thank you tho .. ill try the other forum givin above.

Ads must include a price. No "Make me an offer" ads.
NO posting of your ebay or craigslist listings.
No Selling for someone else unless you are going to take the responsibility for the transaction and be held liable for it! NO EXCEPTIONS

Posting to the classifieds is FREE!

Committing to sell and item or items and backing out of the deal or not sending the part or parts after they have been paid for and or confirmed by email between you and a seller, will result in termination of your User ID.
Ads listed incorrectly will be deleted by the Moderators.

Yes, it's kind of hidden on the home page in the header for the IH Cub Cadet Tractor Forum area. Yes, it only mentions Cub Cadets, but this is a Cub Cadet forum... Here's a screen capture of the forum home page with a red box drawn around the info: 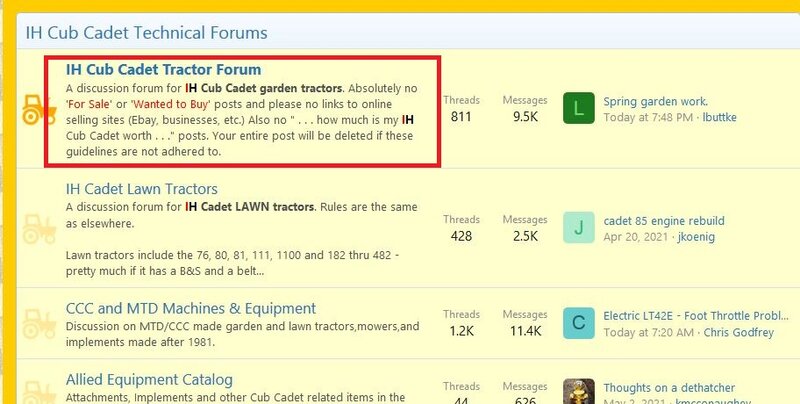 my bad didnt even notice that.
all good i follow rules. so no issue in deleting the post.
my mistake.

ty for showing me where it was. for sure. i should read more of the cats headers lol ..

Ken, don't feel bad, I doubt most people have read it. That should probably be put in the forum rules somewhere. Back in the earlier days of the forum when there were fewer forum areas, that appeared more prominent than it does now.
K

yeah but issue is for me.. i use to run forums myself lol.. php nuke and php fusion . was what i used. tried a few others over the years lol . i know theres that spot for text lol ...

but all good.. i jumped 3 times ran around block with foil on head .. hahaha a
thank you tho for the help .. its a sunny start today. think ill tinker on the cubs.

thank you to all tho for help..

I'm not 100% certain why that rule exists but I believe it's, for example, to prevent someone in an area that's rich with Cub Cadets and attachments giving a value to someone that's in an area where they are rare a low price. Then they get bent out of shape because they think it's worth far more. Or someone gives a high value and they get their hope up and then get no takers when listed or get low ball offers when they think it's worth far more and again they get bent out of shape. I could be wrong and it was because Rev (the founder of the forum) didn't want people giving values.

I believe it's because it is all based on an opinion. Anyone can say I want a grand + for their tractor.. we all know that probably isn't reality...
It's worth what someone is willing to pay. So that was always the reply. It was between the buyer and seller to settle the value.

By the same token, anyone can watch their local C-list, big auction site(s) and in a weeks time see what folks close by are asking for their tractors and attachments, you still won't know the selling price in a lot of cases.. but you'll know what they asked for it. fwiw / imho / yada yada yada…
H

It's one of the rules that I HATE MOST!!!!
I think it's a dis-service to all Forum members to NOT be able to advise what something may be worth.


kmcconaughey said:
We don't allow "How much is my Cub Cadet worth?" type posts, so why would we allow "What is my Wheel Horse worth?" posts. The reason for this is that the worth can vary greatly depending on condition, options and possibly most important, location. I'll leave the thread up however.
Click to expand...

I do agree that what something is worth can vary GREATLY depending on condition, options, and location, but location is not most important. To me "demand" for the specific item is most important.
So what's an M&W 9-speed gear box worth? Lets' say it's in great condition. I doubt it matters if it's located in CA or AK or HI. It can be easily shipped. Now lets say it's still installed in the Original. I suppose that could change the value if the owner won't remove it, or the owner says "picked up only". I would think most Forum members would likely recommend the owner remove it or be willing to remove it in order to get the best price for it.

So, I think it's time for a change to the rules. It might actually generate alot more activity.
I'd certainly like to hear opposing comments.

Hydro, I agree. I agree with Mike too. How much is it worth to you to have the rule changed?

Sorry, I might have to give myself a time out for that.
K

i think the rule is sort of proving itself here with the post above. lol

i guess its like a garage sale lol... things marked for 10 bucks you go omg no way. to you there worth 10 cents lol. but someone might pay the 10 bucks lol who knows..

anyways i know the rule now. i learned after bein brought out behind the shed tho Kraig made me pick out my own switch lol . hahahha naaaa you all been good over it ..


ps edit..... to what harry said about rule change.. maybe put a cat up see how it plays out. with the pined post titled TEMP ONLY IF ISSUES CAT WILL BE CLOSED...
but thats my 6 cents as wood as tripled in cost lol ..
H

kmcconaughey said:
Hydro, I agree. I agree with Mike too. How much is it worth to you to have the rule changed?

It's worth A LOT to have the rule changed

I just don't know what A LOT is worth.

If someone says something is worth "blankety, blank blank" isn't the next obvious question "why do you think it's worth that"?
That's where the truth will come out. Something that supports why it is. Something like, I sold the same thing 6 months ago for blankety, and that's why.
G

Let me throw an example...you decide....look at FB for cubs,they're all over the East coast at what I think are reasonable prices (most of the time) but in Mi. there are far less and it seems most guys think they're gold plated and pictures never show the "real" condition...I would only advise someone to look up auction sold prices....ask your ins. agent what they would cover it for that ought to start something....
H

gary noblit said:
Let me throw an example...you decide....look at FB for cubs,they're all over the East coast at what I think are reasonable prices (most of the time) but in Mi. there are far less and it seems most guys think they're gold plated and pictures never show the "real" condition...I would only advise someone to look up auction sold prices....ask your ins. agent what they would cover it for that ought to start something....
Click to expand...

Gary - I lived in CT (on the east coast) for 14 years. Lots of people there thought their Cubs were made of gold (not plated), and lots of people never sold them (at least to me). I agree there seem to be alot of Cubs in many of the east coast states, but I also had the impression that there were alot more of them in MI, IL, WI and prices in these 3 states were alot less than the east coast. How did I get this impression? Well, I bought alot of cubs in CT for asking prices that were higher than what I saw posted in MI, IL and WI (mostly looking at Craig's List, but some dealer sites too).
And you're right about pictures. Fresh paint makes things look really good in pictures - but when you see it for real with brush marks, well the story changes.
And the other thing is, I found most sellers hardly knew anything about their Cubs. Yup, the clutch makes a little noise but seems to work fine. And don't move that hydro lever to much or she'll jump away from you. That hole in the deck doesn't effect the way it cuts grass. The lights don't work? Geez, I never used them and didn't know. The engine only smokes if the tractor isn't moving. I don't know what model it is, but the 3 numbers on the side say 149.

I still think if we discussed what Cubs might be worth we could go along way towards helping people, especially those that don't really know anything about their Cubs. We don't have to discuss "exact" prices, just price ranges. I really hate to see that guy with an Original sell it for $300 not knowing since it had an M&W 9-speed option that it was probably worth somewhere between $3k-$10k.

That's my story and I'm sticking to it.
M

And the M&W value... that's what some would pay. NOT all of us. So you tell him to tear his tractor apart and sell that 1 piece for those numbers ( a 7 thousand dollar spread???) and then what does he do with his tractor? Ya gotta give him a number for a non driving tractor unless he wants to buy parts? SO what's that worth? I'm just playing devils advocate here. It's no skin off me if anyone asks a value and you want to give a value.. I'll be moving off all my stuff in the near future.. But I already have an idea and know how to haggle.
You must log in or register to reply here.
Share:
Facebook Twitter Reddit Pinterest Tumblr WhatsApp Email Link