Thought I would start a thread for myself to keep track of my "smaller" projects. With the county fair under 3 months away I need to have an engine fleet ready for display!

So we'll start back early on in the month. I pulled out 2 of the engines that were displayed last year and got them going.

First my late 40's/early 50's Clinton model 350. ID tag is gone so I can't get an exact year. I bought this last year at a small flea market in a package deal with a 700a for parts. I wanted one for a few years, these little guys have a rather unique design. If you look closely you'll see that the valves are actually in front of the piston instead of to the side of it. These little engines have 2 camshafts, one for each valve, because of this design. And a really unique combustion chamber shape. Little finicky to get running, these have a super simple suction type carb with no fuel bowl of any kind. Once it gets running it runs pretty well though. Paint is not original, might be a good candidate for a restoration... 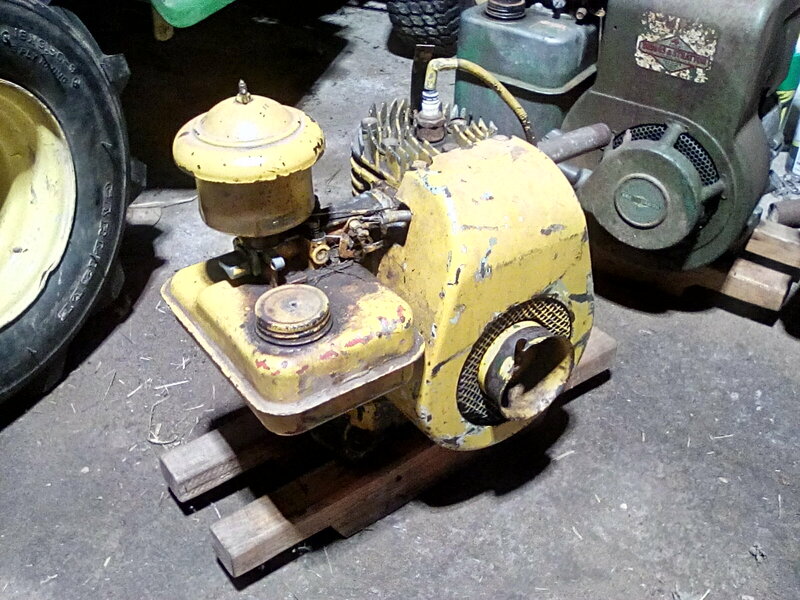 Next I pulled out my Kohler K90. This one I bought from the same place as the Clinton. Unfortunately the magneto went dead on me and I had to convert it to battery ignition. This particular engine has the Bendix Scintilla type magneto instead of the more common one. It was used on a lot of outboard marine engines of the era and supposedly aftermarket replacement coils are out there but I can't seem to find one. If you know where i might be able to purchase one the part is: Preferred Parts #BE20.
The engine itself required a little work to get running. After enduring 36 hours of nonstop rain at the fair last year it ended up with water in the fuel and didnt fare so well. After a carb and sediment bowl clean it runs great. Also pulled the muffler and treated it with heat-proof manifold paint to prevent it hopefully from rusting out. I posted about this little engine in another thread I think. If you listen to the video you may be able to hear what sounds like bearing noise. I think it might be in need of some new crank bearings at some point, but for now it's going to stay as is because I don't plan on working it or running anything with it, for display it's alright. 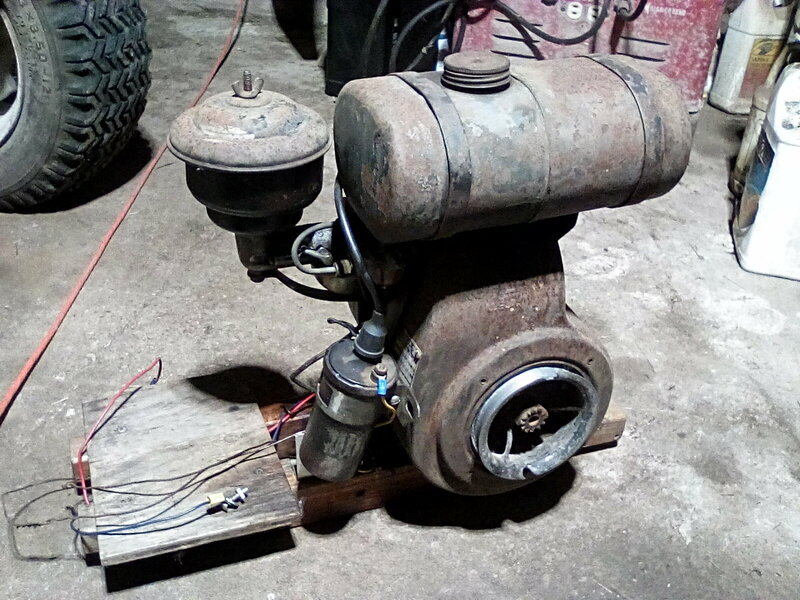 Next I pulled out the Clinton that I've had the longest. This is a model 774AT, a derivative of the 700A series Clinton engines. These date to the same era as my 350 seen above. I bought this engine 4 years ago now for $5. it had almost no paint left on it. It's not pretty but I ended up going over most of it with a dark green paint that was similar-ish to the old Clinton engine green. I got it to run two times, and two times only. The bearing/flywheel backing plate alloy on this particular engine was not happy and it was crumbling away. I could see this around the edges and i dealt with it accordingly to hold the fan shroud in place. However, 30 seconds into the 2nd run was when the magneto mounts decided that they no longer wanted to hold the magneto. After that I had no choice but to let the engine sit until I could find a replacement. This is what was left of it after removing it from the engine. 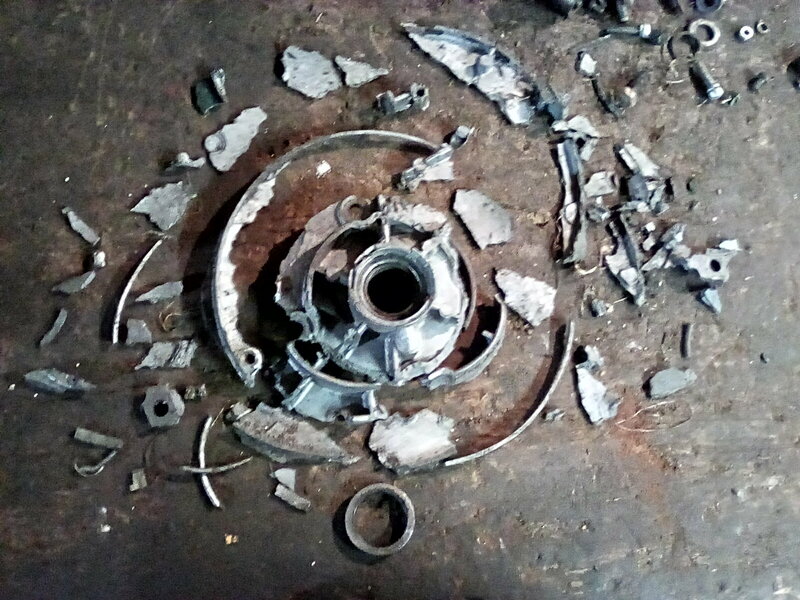 Fast forward to last year. Remember that 700A I purchased as a package deal with the 350? That 700A is the reason this engine is finally going back together. The 700A had no compression and a stuck rusted out muffler, and it was missing a couple other things. But it had a fuel tank and most importantly a bearing plate that was usable!! It was a different design than the original and required that I drill a single small hole in it to clear the camshaft pin, which sticks out on the 774AT. It also has variable timing which is interesting, I just left it in the same position that it was when removed from the other engine. I am finally getting close to completing this. As of right now I want to try and find more of that green paint so that I can match the fuel tank to the engine. I only had enough left to mostly cover one tank strap with a single coat. If I can find the paint I will re-do the rest of the engine with proper paint prep later on. In these pictures the tank is mounted backwards, it was just thrown together quick for the picture since it will need to come off again. Once I can come up with a good fuel line setup I can try and run it again. 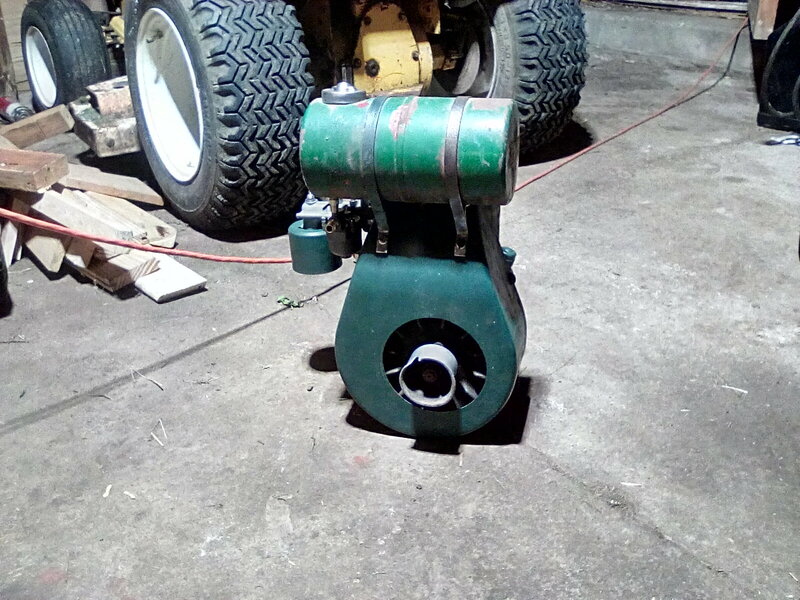 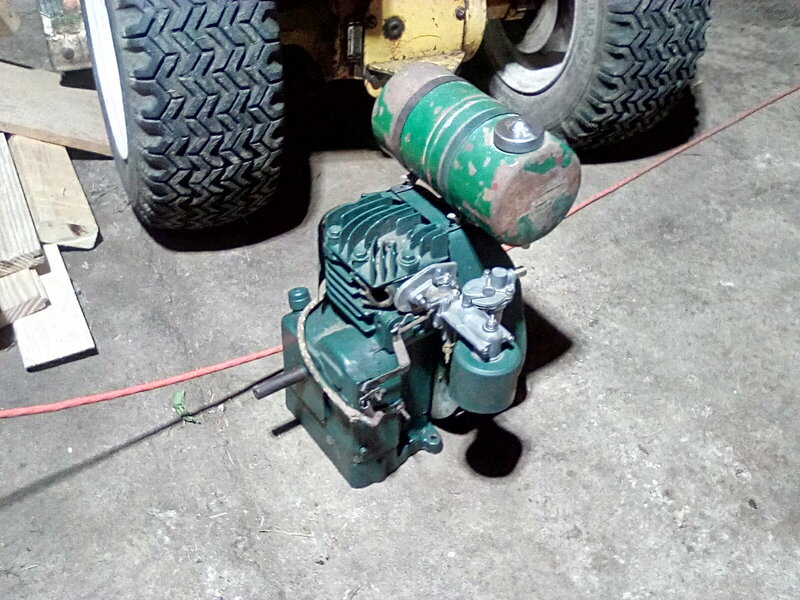 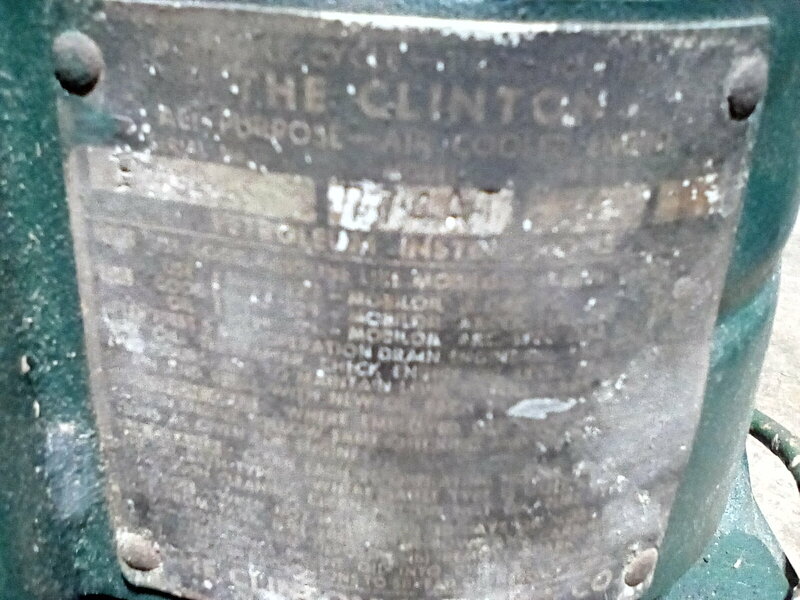 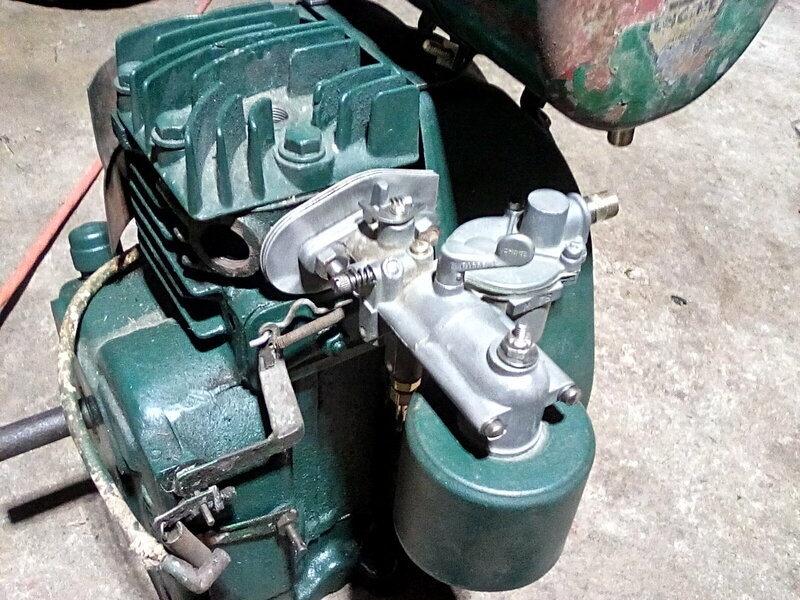 Its also worth mentioning my Maytag 92. I actually replaced the connecting rod on it back in the winter. Old one seemed to have a fair bit of slop being made of brass. Seemed like cheap insurance, Crankshaft was fine. Other than that just cosmetic stuff, replaced the Tractor Supply muffler that someone had jammed onto it as an air intake with the proper screen, and then purchased a replacement caution plate and spark ground tab to really complete the engine. At this point it just needs a better engine mount stand. 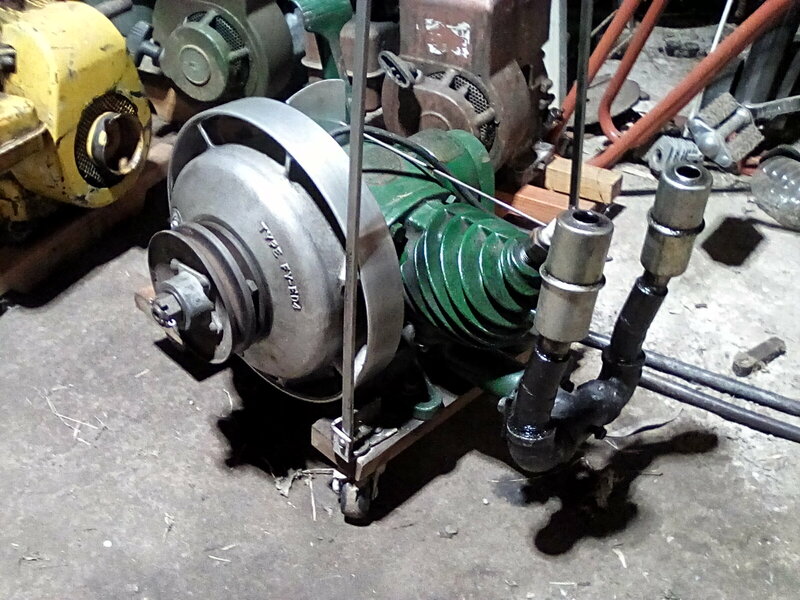 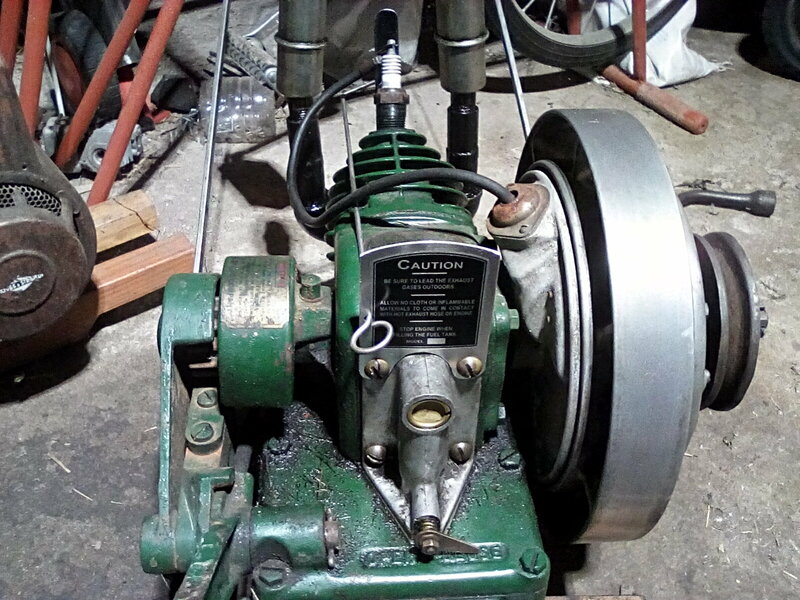 JPrattico said:
Thought I would start a thread for myself to keep track of my "smaller" projects. With the county fair under 3 months away I need to have an engine fleet ready for display!
Click to expand...

Two things brought to mind that it is gratifying to see; Detachab;e pull-starters and those pretty curved cooling fins on the heads. Oooh, and spark plug grounding shut-offs installed by the manufacturer like my very first mini-bike had.

I always tell folk - young and old - who are trying to get into automotive repair to start with a single cylinder, free-standing flat-head.

Then too, it's just a doggone fun and relatively inexpensive hobby with very kinetic results.
Last edited: May 30, 2022

In today's installment of working on the little engines, lets cover one of my newest additions to the collection. This is a 1934 (?) Briggs and Stratton model Y kick start that was given to me from my dad as a birthday gift. It runs, but it has a big issue with overheating after just a couple minutes running. Based on the owners manual for the Y I'm going to start with the oil, and change it for 20 weight, which is apparently the thickest oil it can have or else it might cause overheat issues. The engine is not running lean. It runs alright but I can't run it for more than 3-4 minutes. 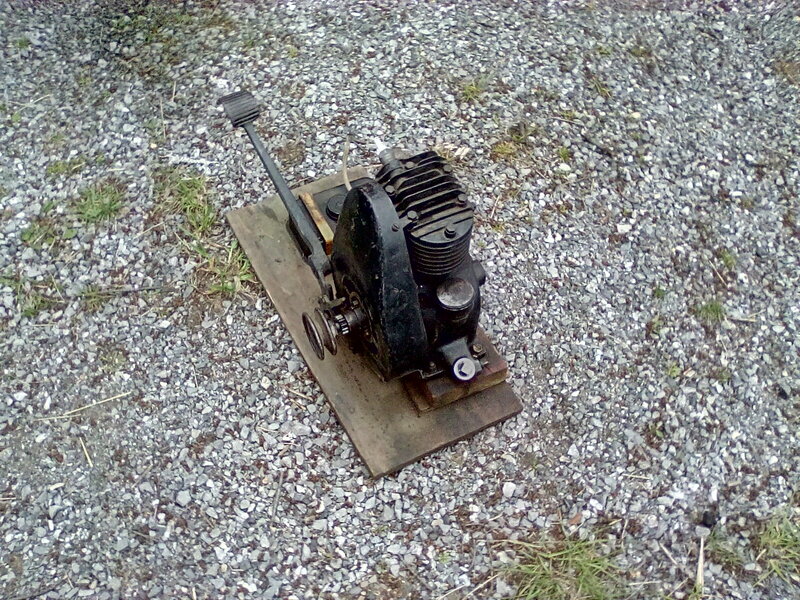 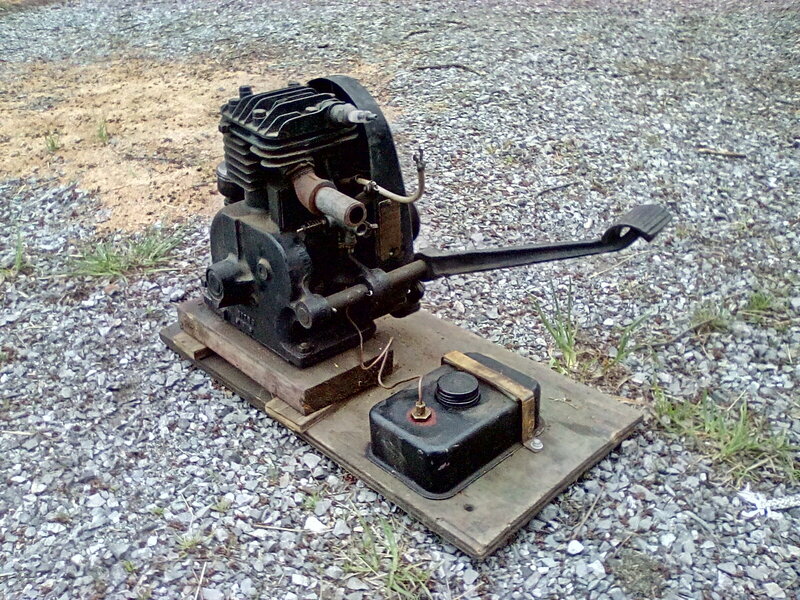 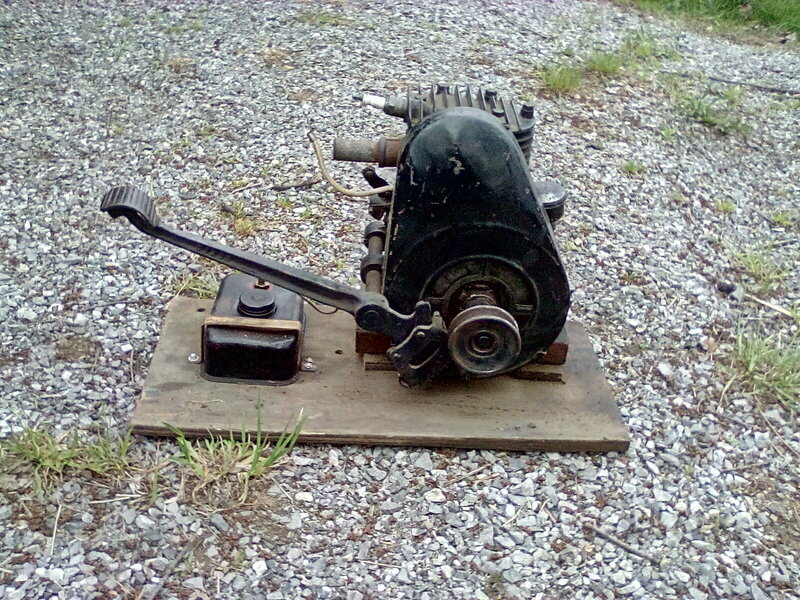 JPrattico said:
In today's installment of working on the little engines, lets cover one of my newest additions to the collection. This is a 1934 (?) Briggs and Stratton model Y kick start that was given to me from my dad as a birthday gift. It runs, but it has a big issue with overheating after just a couple minutes running.
Click to expand...

That engine is a pretty cool gift to have received.

Make certain the the plug - regardless of fitting properly - is correct. A lot of heat can be transferred by incorrect insulators.

Also, timing can lead to overheating. Usually, it is easier to detect when under load but not so obvious on a static-display engine.

Lastly, the stub exhaust is not your friend when it comes to overheating.

wonder why this wouldnt run? 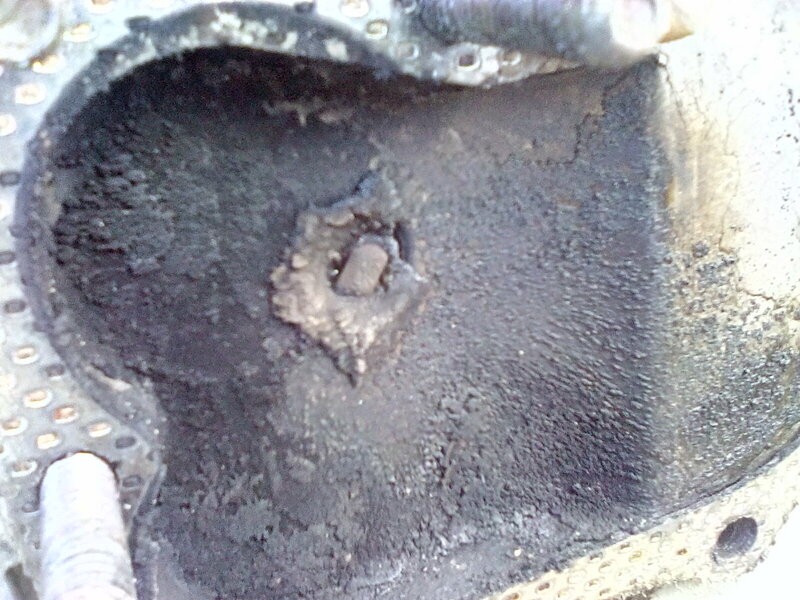 JP, see ya' got the bug...nice work !!!....Oliver green is pretty close.....only comment n Briggs "Y" heat...that engine was designed to run on leaded fuel might have to try an additive for lube....I had to change my old harley valves and seats for that reason...cool engines !!!

Gary I'll definitely look into that, as well as the other advice mentioned. I'm curious what the timing is set at, will have to check. Gonna do a good look over the whole thing, get a muffler, change the oil, check the timing, spark plug, and of course try a lead additive in the gas. Should I be looking for zinc additives for the oil too? All these engines are flat tappet and currently they all just have standard 30wt Tractor Supply oil (except whatever is in the model Y, and of course the Maytag is mixed gas/fuel).

One thing I like is that the power output is a pulley on the front of the engine, no rear output.
G

JP, most (not all) of the small engines have a dot on the cam and the crank gears..The kicker of course you have to break the case to see that. If it starts the timing is very close..Most the points run at .018-.020..you can use a light to set the break point on the points.I have a small 12v I use for all kinds of small tests...don't know about the zinc thought....just make sure all of the shroud jacket is there...If it gets too hot it will shut itself down and hopefully not seize it...All of my engines were running before painting but simple truth most haven't been run since...I have been terribly lax in draining fuel but a steel tank with no fuel is going rust bad...

I was just going to check the points, not the camshaft timing. I've been careful to not run it very long in fear of having it seize up. As for paint, admittedly if I paint an engine and it turns out good I'd be scared to run it! I'm a big fan of the "work clothes" patina look, of course there is a limit to that.

Static time it.
That's the only way to go.
G

JPrattico said:
I was just going to check the points, not the camshaft timing. I've been careful to not run it very long in fear of having it seize up. As for paint, admittedly if I paint an engine and it turns out good I'd be scared to run it! I'm a big fan of the "work clothes" patina look, of course there is a limit to that.
Click to expand...

JP, paint is a choice,clean matters most...but they came from factory painted...no fear run it ,that's what they were made for.....

Yeah... no kidding! That is CLEARLY the wrong gasket.

Diamond in the rough