I enjoyed running my 1200 last year over to mow a friend's yard and getting stopped by a 6 year old who wanted a ride on the 'big' tractor! I mow with ags and weights for the hillside. His mom said no, but I let him sit on it in the driveway for a few minutes, shutoff of course, brake locked.
Bob, your story sounds close to mine. Unknown number of OT mowers before my buddy got his original, and the rest is history.
E

John L - hmm, another frequenter of scrap yards? I told this story a few times on here and posted this pic before but will do again. I wish I had a pic of my 169 exactly the way I found it. I didn't "drive" it out of the scrap yard but that's where I found it. The K341A was still in it - but the whole thing had been rolled over and steering wheel was twisted to the side. Air cleaner was missing and carb was packed full solid with sand. Surprisingly I was able to salvage the carb and it's on it to this day. So for all those collectors out there - if you're driving by a scrap yard it really could be worth stopping - especially with today's steel prices. Back in about 1990 when I got my 169 it cost me $20. If you want to see what it looks like today click on my name at the message heading. (Ooh, I did add the Hyd. Lift conversion kit too) 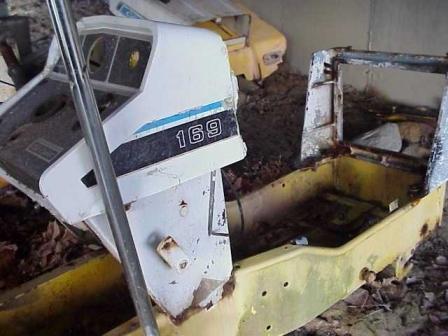 Harry - What would you call a scrap yard? I'm trying to find one in my area but its like auto parts. Thanks
N

Any of the recycle yards around my area will NOT sell something back out of the pile. It's complete BS. I've been there numerous times dropping off and seen something I liked. But they refuse to let you by it back. I have made a few deals coming off others guys trucks, but once it hits the ground, they will not let you take it home.

And you know those guys cherry pick crap they want every day. But it's "against policy" to hand a a guy a $20 and pick it up. They think you will try to return it or sue them if you buy it from them and get hurt.

I would say what could be considered a "metals recycler"....

I am originally from the Danville, Illinois area. We have several "junk yards" (Coultas, Bryants, Bill Smith) that are automotive "recyclers"/pick-n-pull type places. We also have a place called Mervis Industries. Mervis is where you take bulk steel, bed frames, aluminum cans, and other "non car" types of steel for recycling (they buy scrap). This is the type of place that I would expect to see a tractor or the like, not a pick-n-pull type place.....

For Example, I know a fella who runs a driveline and machine shop, he has barrels of driveshaft tubing and U-Joints from his shop. It would go to Mervis, not one of the other yards.... this is the type of place I would look for....

I've found over the years of being an owner/collector you can spot that Yellow and White Paint from a mile away, behind the barn, in the dark, under a tarp.......... so sitting out in the open is just a bonus.....

I think we have at least 3 or 4 IH Cub Cadets on this board that were "rescues" of one form or another....
H

Austin, Nick and Scott - I lived in CT at the time I got my 169 and I got it at what was really an auto scrap yard but also accepted what they called "light metals", like wash machines and dryers, water heater tanks, lawnmowers, etc. I went there to get a half axle for my '83 Buick Skylark (one of the infamous GM "X" cars, and at the time, approx 1990, the half axles were kinda expensive even rebuilt). This was one of the few scrap yards that would actually let you walk the lot and remove items yourself. After pulling an axle I was on my way back and noticed the light scrap pile and the "yellar 'n white" item. When I stopped at the office (broken down trailer) I asked about a garden tractor and the guy said he'd have to look at it. We walked over to it and he told me I was lucky the "Generator" was still on it, but I could have the hole thing for $20. I can't honestly remember how I got it out of there. It didn't have wheels and tires. I think I got him to pick it up with a little loader and drop it in my pickup. I put wheels and tires on it after I got it home and rolled it under my deck. Pulled the K341A and put that in my garage, then pulled the front axle and rearend and set them aside. The rest is history but took nearly 20 years to piece together.

Out here in WA state mostly what I've seen are what are called "Auto Recylers" and none I've seen have light metals. There are some "Metals Recylers" They mostly seem to be into things like wash machines, dryers, fridges, A/C units, and other household appliances. Have found a few that let you look and sell parts back but haven't seen any garden tractors. With the advent of Craig's List I see several wanted dead or alive listings that probably get most of these. I've heard there is 1 yard and garden scrap yard but haven't found it yet. There are so few Cub Cadets out here I'm certain the majority end up on Craig's List.
J

Hydro Harry,You have a very nice model 169! That was quite the come-back story of the International Harvester Cub Cadet.

You know, I once scored a K341 from a model 169? Had it in my shop, and planned to re-power my model 86, which I still have. Well, there was a gent from South Dakota who traded me a set of IH wheel weights, and paid both shipping expenses. I never heard back from him, about 3 years ago now. No news is good news, so they say! At the time, I had so many irons in the fire, along with a 72 re-furb going on, the engine really did not matter to me. However, I just happen upon a K301 from a 124 or so, from my friend for free! So, that's going in my 86 in due time.

There once was so many IH Cub Cadet parts at my local scrap yard, about 7 years ago. I'm very good friends with the Jewish family who owns and operates the site. I always get a nice price for the items I want, and always welcome to walk the yard to pick anything of interest to me.

Anyway, the gent next door to the scrap yard was a large collector of the IH Cub Cadet garden tractors. I refer to "large collection" due to respect, as it was like what you may or not have read about in Cadet Connection Magazine. Long story short, he passed, and we all went to the calling hours, where it was decked out with all his favorite IH Cub Cadets. His son ( the lil sprout ) eventually started scrapping out the collection, maybe to hop-up his pick up truck with the fast cash he would bring in.

Hydro, I have seen with my own two eyes, more IH Cub Cadet parts and tractors then you can shake a stick at, in this scrap yard on one "lucky" day I happen to "pop" in. My heart sank, and I booked down to the track hoe loading then up, and quickly gave the operator the halt signal. I did not have much cash with me that day. I gathered many things. One was a nice gear set for a gear drive transmission, and a rear end or two. I paid the next day for the parts, some of which I still have. Oh if only,....... . But that's where I drove a running 1450 up to the front of the yard to weigh it out, and load it in the pick up.

It was hard to believe what was IH Cub Cadet related in the scrap yard that day. One guy said it was a three day event of incoming parts and tractors. Some one once said, a squirrel could get from the Ohio River, all the way up to Lake Erie ( by me ) with out ever toughing the ground. That was a good way to describe what I seen at the yard that day about 7 years ago.
J

Hi guys... Just bought a 123 from a relative... pretty good shape, just needs some electrical tlc and then Ill be able to see what kind of shape the engine is in... but Im curious as to which type of snow plow I would need if I decided to put one on. Thanks!

I think I found a 1200 Hydro a guy has he wants to get rid of it because its hard to start. These are the quiet line models correct ? I heard it run yesterday and it runs great,just hard starting ( I didnt wanna tell him half the problem is his plug and wire ) . He was asking $ 350 for it with a snow plow and wheel weights,but he called me this morning and said if I want it I can have it for $ 200. Im thinking ok its sold I will be by later to pick it up. The tractor is in really good shape and doesnt need much really. I'm still looking for an original to restore but havent found one I like yet. Ill be going to look at an 'O' this weekend in Columbus a guy started to restore but didnt finish it...

I looked again at the add and it is a 1210 model. Those are just CC models right or where they IH ? Not really dealt with many of these before. I just cant beat the price. I already snagged it going here in 20 in to get it. IDK if I will fix it and sell it for cash to buy an 'O' with or keep it and add it to the group...lol

FWIW, It can be equipped w/a Cat 0 hitch also.

Picked up a decent grill for the 126 and have it stripped ready for paint.
I'm assuming at this point,it gets the same color as the dash, hood & wheels? 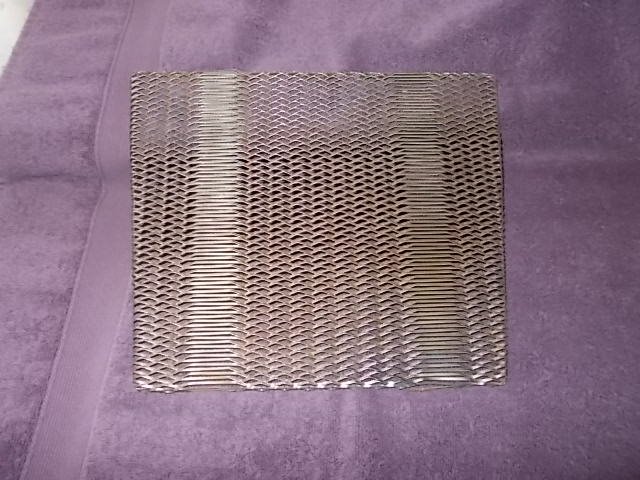 David, the grill screen would originally have been zinc plated. Easiest refurb is to just paint it silver.

Dave, I was going to tell you to use Zinc in a can. But Kraig beat me to it.

Well, so far, so good I guess. Here's what I have to offer for this winters worth of hours in the shop

Here's the little guy in all his sunlit glory, at least what there is of him so far!!.
And yes, he made it outta the shop under his own power , 1st time in who knows how many years.

I have silver metalic that I used on the hydro pump lever and linkage, would that suffice for zinc in a can??

Great day here today and I could not resist the photo op, kinda like some politicians, Ya know!

Now, If I can just find some help for the hood and fenders, gonna need some body work on 'em. 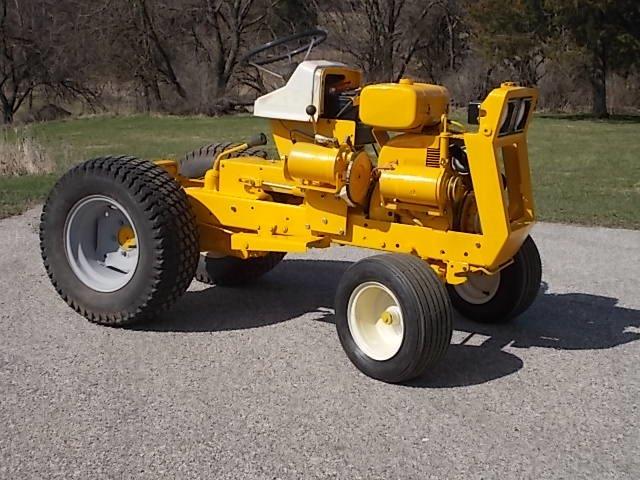 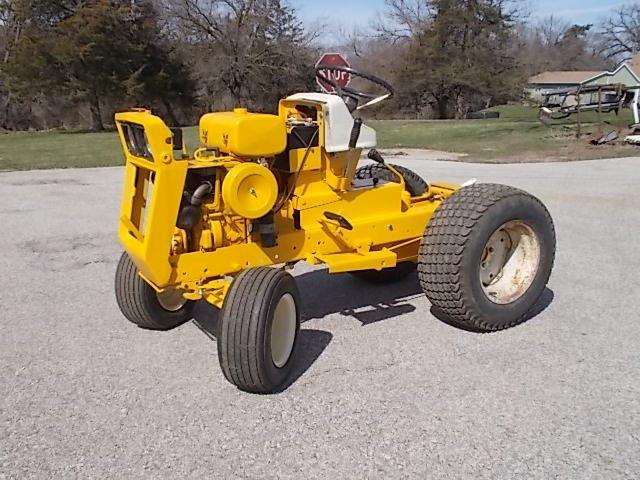 Thanks Frank!
Only one little problem has cropped up though.
I completely forgot about the PTO linkage when I made the brace for the hyd pump and now I fear it wil be in the way of the PTO engagement rod.