I don't mean to flood in with tons of postings but since I'm new and since you guys like pictures so much, here's the backstories to all 4 of my Cubs (and pictures!). I'll start with the 107, my first one with probably the most interesting story.

So we start 30-35 years ago, before I was even alive, with a completely different 107. Owned by one of my neighbors, it ran but smoked real bad. Went in for rebuild, bored out and sleeved back to standard, new piston, rings and rod. Soon after rebuilt it developed a governor linkage issue, didn't affect performance but bothered my neighbor. So, he bought what is now my 107, bad hydro, but engine ran good. He swapped the engine into his working 107 and the freshly rebuilt engine was put into storage, not even fully broken in. The rest of the parts tractor, spare the seat and fenders which sat inside, was dumped in the weeds and would remain there for the next 30 years.

That's when I come along, a complete beginner when it comes to hydro transmissions, but I was determined to fix this machine. Took 3 years, mostly due to lack of parts in my area, but 4 months ago I finally fired it up for the first time after 30 years sitting. It's full model is "1070507" being a 107, with the hydro from a 105, and the engine from another 107. Not quite done, I plan to swap the brakes over to the external discs next time I change the hydro fluid, and there's still a bunch of adjustments needed. 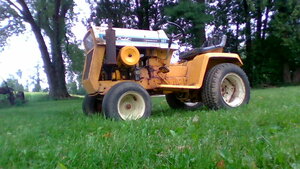 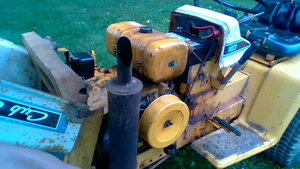 These pictures were taken the day she first fired up, about a month later I added the dual round headlights by simply cutting and bending a piece of aluminum plate to fit through a slot beneath the battery box, mounting the lights to the aluminum. No holes drilled in the tractor.

Next is the 106, which I bought about 2 months before the 107 came back to life. A local friend had it for sale, so not only did I know the seller already, but it was the perfect match for the 107. Prev. owner is a big tractor guy, currently has like 14 antique tractors of all different brands, but he also likes the little stuff. Tractor was very well taken care of and the only thing I had to do was replace the steering joints, one was worn so bad it popped out on me while driving. 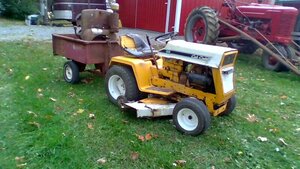 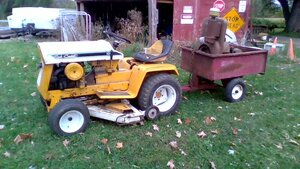 These are like the only pics I have of it on its own, load in the wagon is an old rusty Wisconsin VH4D. Clutch on the tractor is rattly but very strong and no slip.

Next, about a week after the 107 came back from the dead, a friend from down the street tells me he's got an old Cub in the weeds behind his shop. Gave it to me for free. We determined it's a 147, and he painted it red some 25 years ago. It sat in the weeds for 15 years, parked only because it stopped mowing well. Currently the engine is all taken apart, wasn't going to but discovered that there were still balance gears inside. So removing those and replacing all seals/gaskets. Maybe I'll start a thread about it in the refurb/resto section. 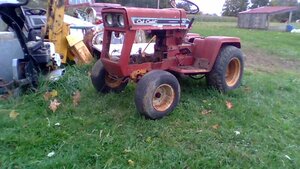 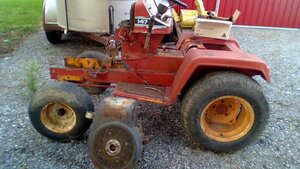 She's got some rust but with a bit of work (and possibly a new wiring harness) she'll once again be a good machine. Oh, and one back tire is narrower than the other because I need a tube for the other wide wheel.

Lastly, my newest purchase, a 1961 Original. Not exactly an early one, built in December 1961. Was a farmer's tractor, so has a few farmer mods. The throttle is mounted on the outside of the dash tower instead of in the normal slot, and there's no key switch either. Just a knob you turn. Was found partially sunk into the ground about 10-12" guy I bought it from completely rebuilt the engine but left everything with original patina. He also installed the tall muffler and those big ag tires, which make it look pretty darn cool. 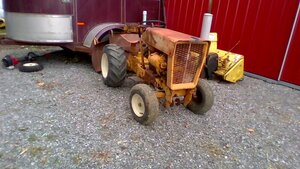 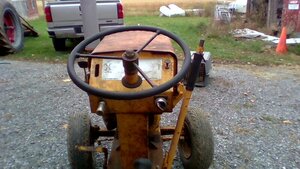 Clutch slips a bit in third gear at first, I think she might need a clutch rebuild. Will still pull a heck of a load in first gear, though. Used it to haul firewood a little while back and she handled a full wagon no problem!

Well, that's my 4 tractors. I need a plow so I can move snow with the 106. Maybe next year I'll find one. Also still lookin' for more machines, I would like to eventually complete the 1X6 1X7 series but I'm in no rush. 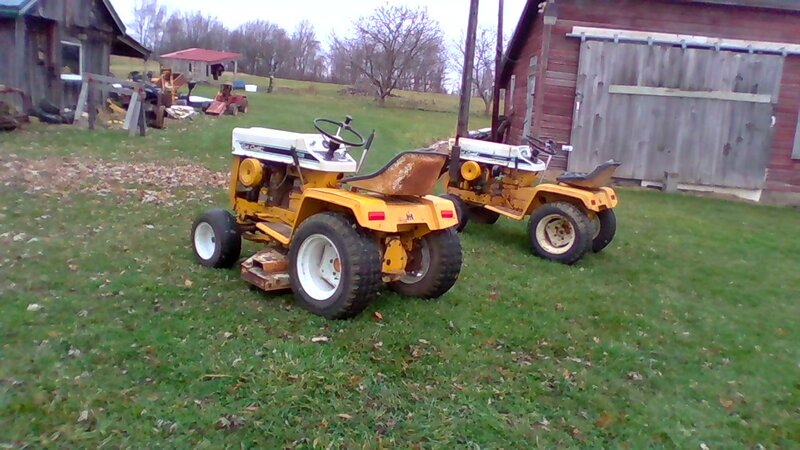 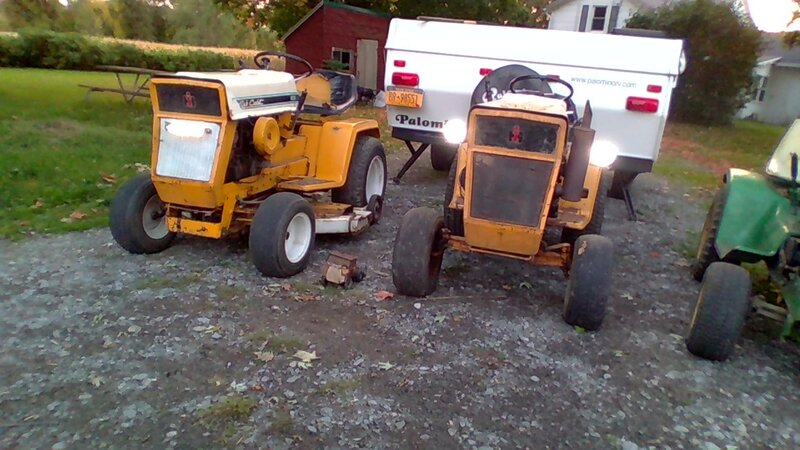 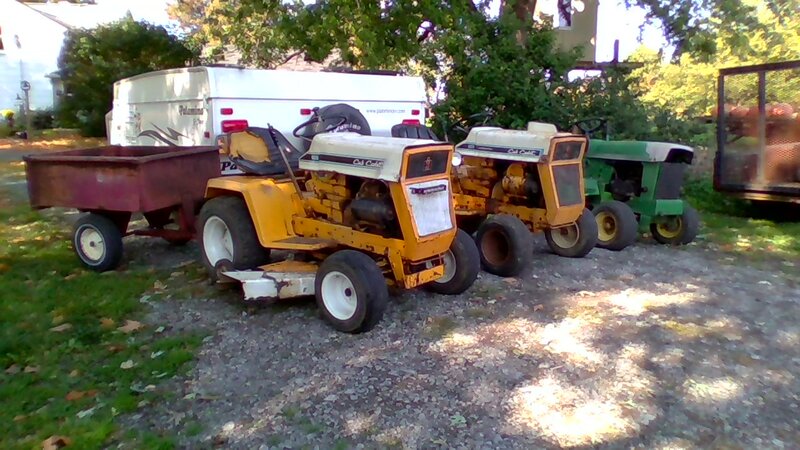 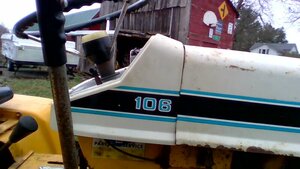 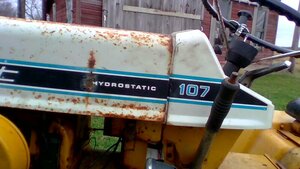 Fever noth'in; I think they breed. Great story. Good luck to ya!

Oh yeah I caught the fever! Still lookin' at the local CL just to see if I can get a good deal on something!! I'm glad I caught the yellow fever and NOT the green fever, because my green monstrosity (JD 110) is an absolute pain in my butt. It was a good deal, but the driveline is ridiculous. The Cubs are so much nicer and so much better to work on.
R

They do breed. Never leave parked facing each other. If they lock eyes there will be another come a long soon. Found that out first hand. Started with a 107 that wasn't off the trailer 24 hours before a 129 showed up. The 107 must have started a mating call. Now there are four.

Hmm, well maybe you're right. I mean, how did I end up with a 147 so fast? Only logical explanation.

Also, fellow 107 owner, how do you like yours? Loving mine that's for sure. It's probably the most spoiled a Cub Can be without just being a garage queen. I basically use it like personal transport vehicle all around the neighborhood. I wanted to make sure she lives a good life after the 30 years of pain endured before I bought it. The neighbors all love it too, and since we all live in a farm community nobody can do anything about any noise I cause with it!
R

I don't like my 107. My first 149 convinced me to stay with a wide frames. The 107 has proven to be more of a project than originally expected. It was a field queen also. It seemed like everything was so frustrating. Even taking off the deck drive belts was a hassle. The belts had "grown" to they pulleys so nothing would rotate. Had to cut the belts off. The brakes were seized. Had to free up the pedal then the brakes on the rear end had to be freed up. After all of that we were able to determine that the engine does rotate after we cut the starter belt off. The starter is also locked up. Very frustrating.