Hi guys...been lurking around a bit here but finally signed up for the forums, because I have some questions that maybe you can help me with.

Not quite two years ago, I purchased on eBay, untested, a riding mower sold as a "Cub Cadet mower, running." I paid a winning bid of $100, and had my mother-in-law pick it up on her way to visit us.

When it got here, I couldn't figure out how to get it off the trailer, and so it has sat, in the same spot, on the 4x6 utility, until just a couple of days ago. It was sold as running; my mother-in-law told me that the seller had driven it onto the trailer, but I'd never succeeded in getting it off the trailer or starting it. I tried to at least keep it covered with a tarp to keep rain out, but it kept blowing off.

My father, who is my repair wizard, and is teaching me a thing or two about mechanical repairs, managed to get the tractor off the trailer (the wheels were locked...we had to bump it out of gear to free them up), then replaced the carb, the right front tire (which was totally shot), a few missing keeper pins, and the main drive belt. The local mower shop gave us a solid used carb they had in the back; the original had completely corroded. The mower shop tells us that ethanol blends will leech water from the atmosphere, causing corrosion; they recommended that we use only pure gas.

As of yesterday, it's up and running. Dad mowed a good portion of our church's lawn with it yesterday and today.

What I'm trying to figure out is exactly what I've got. For the longest time, I couldn't figure out why nothing seemed to match the info I was finding online. Older Cub Cadet garden tractors all used Kohler motors, while this one has a Briggs and Stratton, so I was a bit confused. Then I found this page and the info about the differences between the IH Cub Cadet garden tractors and the IH Cadet lawn tractors.

After finding this thread and looking at some pictures, it appears that what I have is a Cadet Model 76 lawn tractor. (None of the original decals remained on the hood, and a previous owner appears to have started a restoration job...there's a fresh coat of Cub Cadet yellow on it.)

If anyone can help me track down the parts list (we dropped a hitch pin out of the deck today and will have to replace it), the manual, and any other pertinent info (and maybe some decals), I'd appreciate it.

One other minor issue became apparent today; the engine is not leaking oil, but does seem to be burning it. Dad was putting in about half a quart every time he filled the gas tank. What oil weight should we be using? (We were using 10W-30 today, but if there's a different motor oil recommended, it would be nice to know.)

I was going to post a picture or two (I had copies of the eBay auction photos), but I don't seem to have them on this computer.

Welcome! You need to be using 30W oil in the summer. That will probably help with the oil consumption.

Thanks for the help, guys. As long as I can keep the Cadet running (the service manual will be a great help), I'll probably wait to do a full restore on it until we get moved. (We're currently borrowing living space from our church while we get our land and trailer ready...the Cadet will help significantly with that.) It would be a shame to restore it (not much needed actually, beyond a quart of IH white paint to fix some edges, and then the decals) when I still have to store it outside.

Now to figure out how to get it from point A to point B, as I don't have a trailer hitch on my van. Guess I could just shoulder it from the church out to the homestead, but it'd be like that Craig Morgan song...

Chug-a-lug-a-luggin' 5 miles an hour
On my International Harvester!
D

How big is the van?

It's a Chrysler Town and Country minivan. I can haul the weed-eater and the push mower, but I don't think I can squeeze the Cadet into it.

Measure it, bet it's close.

Just remember to DUCK we don't want to see you on "America's Funniest Home Videos" ...

I bet you can...I've had several Cub Cadets leave here in a minivan.

The back of my Tahoe has a smaller doorway than any minivan!
In fact, you have to let the air out of the tires or remove the steering wheel, LOL 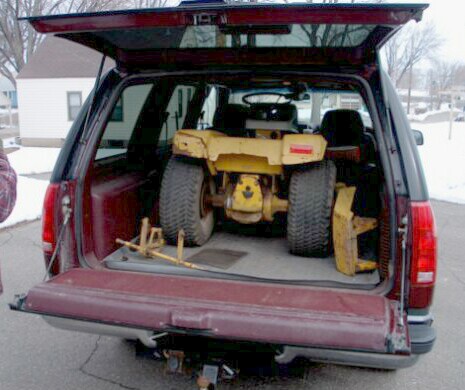 One more question...I found the link to purchase the parts manual and operator's manuals, and I will be doing that soon, but does anyone have a picture of the control panel? My LT has no markings of any kind. I know enough about mowers to drive one; I just would like to have some idea of what each lever does.
N

Scrolling through craiglist in my area and came across this....that's just plain old funny looking. I don't think my kids would even drive that. 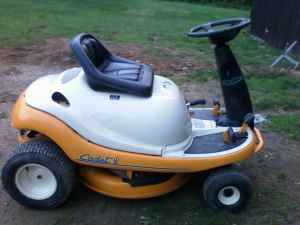 Nick that is odd, because there is one in my area also for sale on C.L. I believe it is a 1027 model and it is also a CCC/MTD version
J

I took the Cadet out for my first spin on it (Dad mowed quite a bit on it before dropping the pin that held the deck in place; I installed the replacement pin this morning).

You can tell I'm not a farmer; I made about a quarter-round on it and it quit, and would not even crank over. So...I needed to get it back up to where I could put the battery back on the charger. I think it's time to replace that battery; it was, of course, dead after sitting for over a year. We charged it up overnight about a week ago.

I don't know what I'm doing wrong; the rear wheels seem to be locked. The front wheels will roll freely, but getting the mower back up to the building was a pain and a half. I ran out as much extension cord as I could; a few minutes on the charger got enough to make it kick over, so I could drive it back to the building.

Thoughts, comments, ideas, suggestions? I have only marginal experience with riding mowers, and because of a birth defect that left me nearly blind in my left eye, hampering my depth perception, I don't drive a car.

Josh: I had the same problem with the rear wheels when I brought my CC 149 home. It sat out in the back yard, twenty feet from the shed, through a rain storm because I didn't know to release the Hydro Release valves

(I have since learned). I don't know if that's the problem, but its a possibility if your tractor has a hydrostatic transmission and its an older model.
T

Is the tractor a gear drive or a hydro?
J

Took me a bit to find out, but every indication is that the 76 is indeed hydrostatic. I'm probably going to need some HyTran in there; guess I'm going to the mower shop tomorrow. 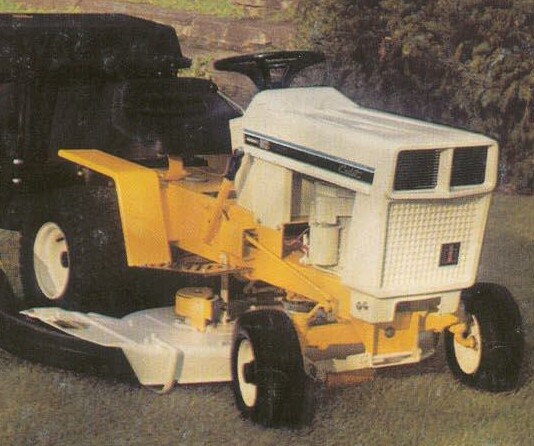 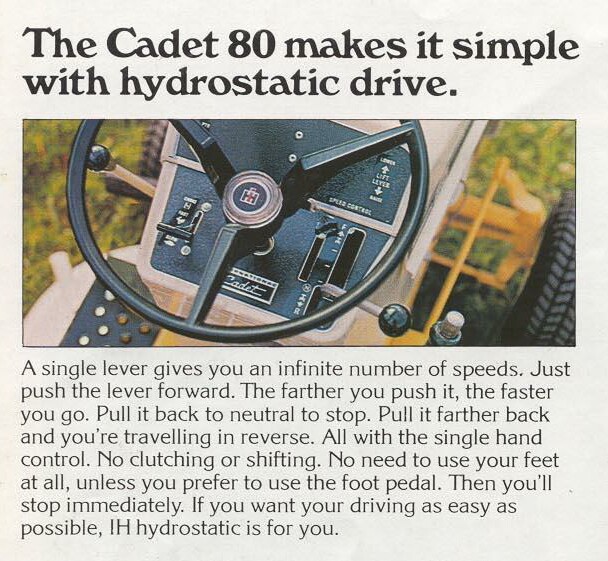