This is going to be a long post and story to share. I was fortunate enough to have received this cub cadet 105 from my grandmother about 5 years ago. Not sure how or why she chose myself out of all my siblings and cousins to give it to but it's the machine that got me interested in the IH built cub cadets and while I couldn't afford or have a need to own full size tractors like I had always wanted when I was a kid it scratched my itch enough to want to get into this hobby. She said she figured since I was only her second grandchild at the time to own a home of my own and that my cousin who already had a place of his own has a sawmill business and farms with newer case ih equipment had plenty of big equipment around to clear snow with she figured I could get it running again and use it to clear my driveway in the winter since it had the blade and a set of tire chains with it (sure beat the aluminum feed scoop shovel I was using).
Now for the back story on this 105. This was my great grandfather's personal garden tractor he owned up until passing away and it served him well since buying it new in 67 and then my grandparents got some use out of it over the years at their various properties and now myself. Hopefully one day one of my son's will keep it going and find a use for it if they can agree on which one of them is going to take it and take care of it lol. My great grandfather along with a business partner owned a hardware store here in Michigan where they also sold and serviced international harvester equipment. So after owning a bolens garden tractor according to my grandmother he must have figured he was going to buy a cub cadet and support the brand of tractor that he was a dealer for. She said he originally had ordered a snow thrower along with the 105 to clear the driveway to their house which was across the street from their hardware store but because of their driveway being in between their house and the neighbors house that ran directly along the other side of the driveway it was a wind tunnel and he didn't like all the snow blowing back in his face (too bad he never purchased an IH windbreaker for it to be handed down to me also but beggars can't be choosers lol). So then according to my grandmother he bought the blade for the cub cadet and sold the snow thrower to a customer if she remembers correctly. 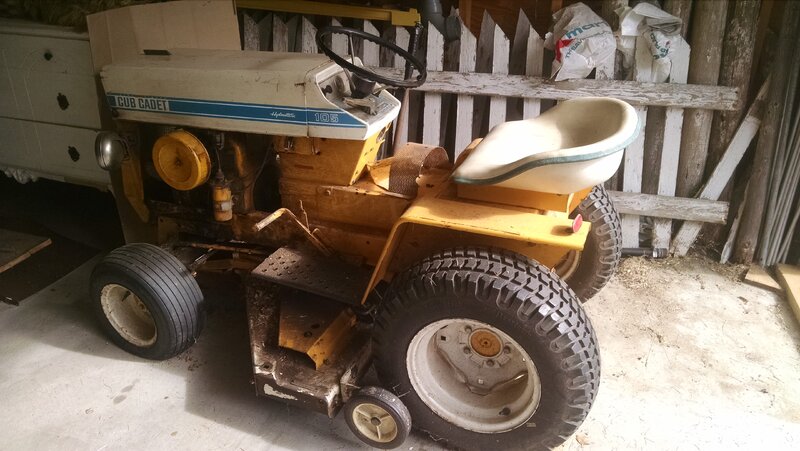 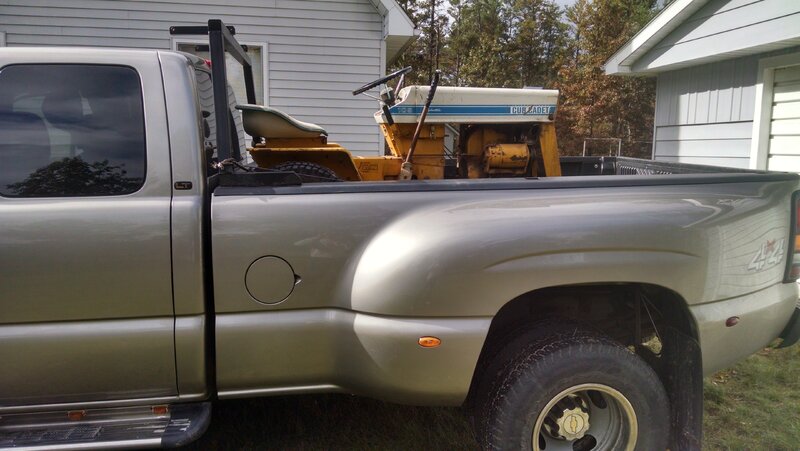 The last place my grandparents had used the 105 was at their cabin in northern Michigan and that's where it had been sitting stored in the garage until she asked if I wanted it. It was no stranger to that cabin up north, my grandmother told me that when the tractor was only a couple years old that her father had taken it up their to that very same place while they were building it and my uncle used it as a young boy to back fill sand around the basement (I'm hoping that someday she can come across the photo of my uncle doing that and make a copy for myself to have). 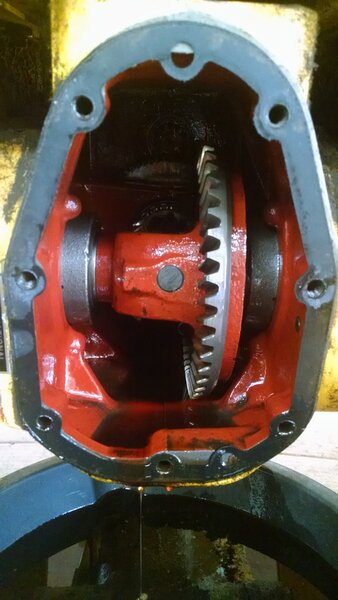 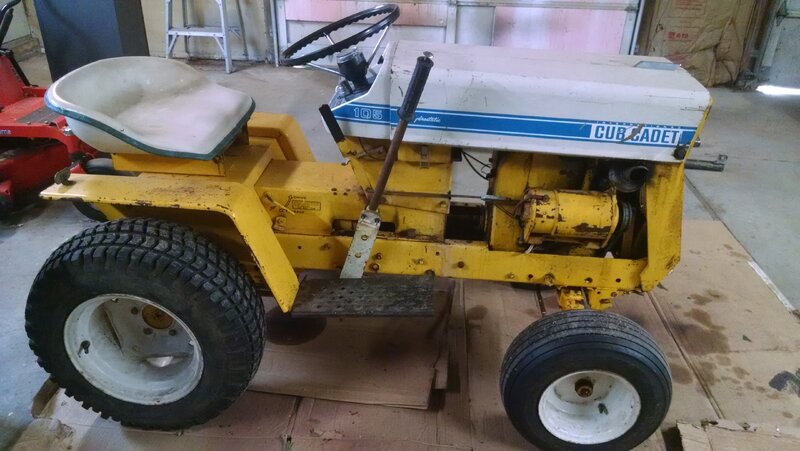 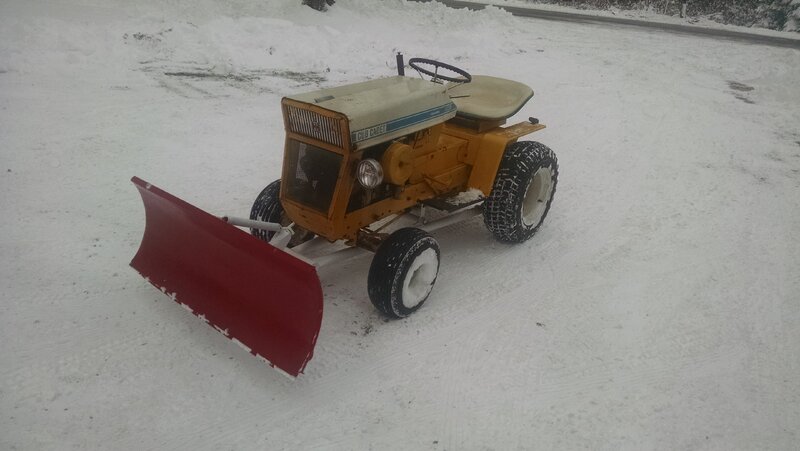 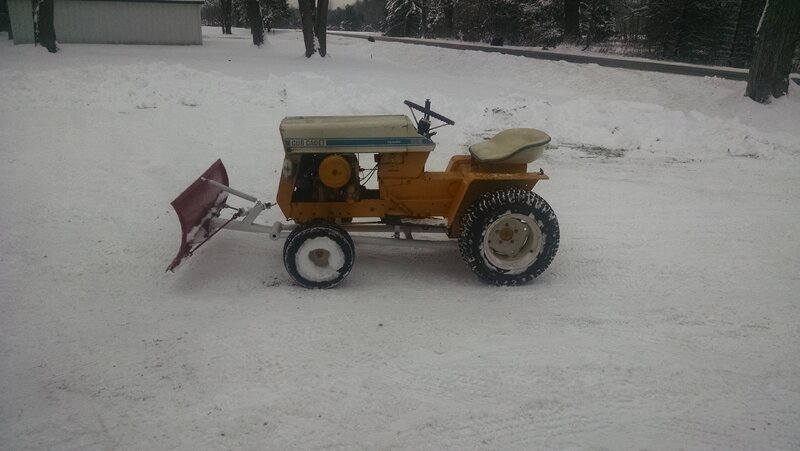 (First time out with it after getting it going, I was so excited to play with it I forgot to put the chains on

)
This tractor has just sat in my small shop now for the past year since buying my 129 but I'm hoping that once warmer weather hits to get some time out there and pull the engine to get started on rebuilding the old tired out k241 and start fixing/replacing/adjusting on the rest of the things the tractor needs tlc with and go through the mower deck if anything is needed on that. I'm sure I'll be having some questions for you guys along the way!
M

Welcome Aboard! Great story and a great tractor. Unusual snow blade... any more pics of the blade?

mfrade said:
Welcome Aboard! Great story and a great tractor. Unusual snow blade... any more pics of the blade?
Click to expand...

Actually I was hoping a member could help identify that blade, it has had me stumped and I have never seen anything that really resembles it even on other brands of garden tractors? I have scoured through countless pictures online hoping to come across something similar with no luck. Here are some pictures of it after I cleaned it all up to be painted. I painted it red and white like it was originally but still no clue what company made it. Maybe it's a homemade deal and if it is someone did a very good job, any help appreciated. 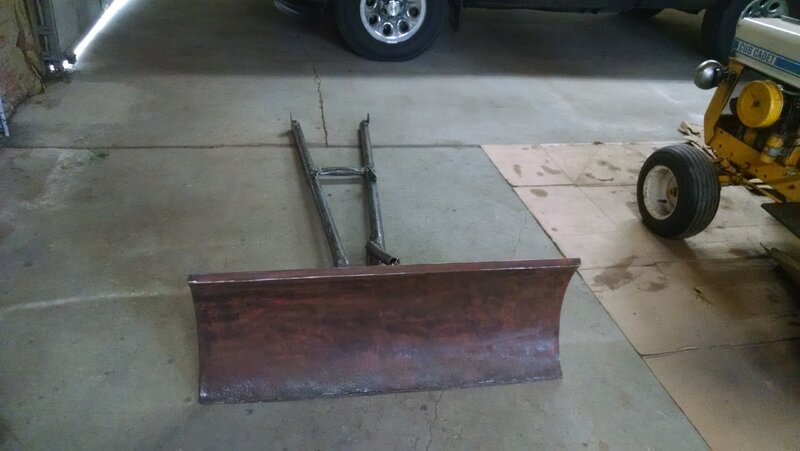 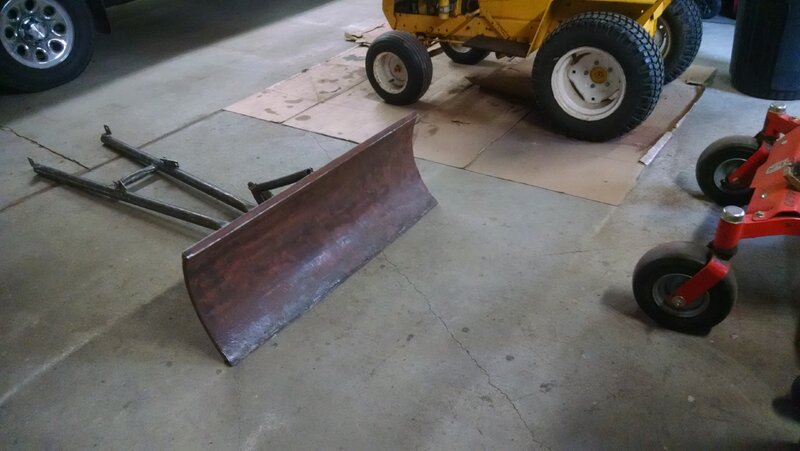 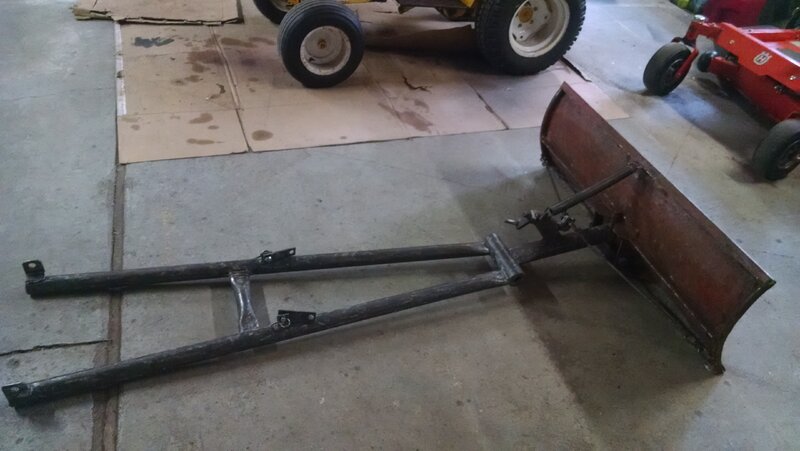 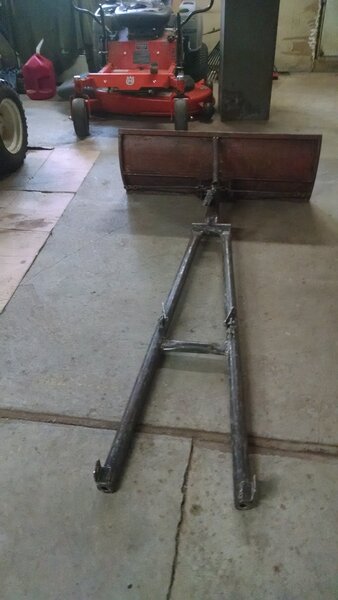 Looks homemade to me.

jbratton said:
Looks homemade to me.
Click to expand...

Whoever did it did a decent job, it has spring trip and not a bad setup for angling the blade either. Their welds weren't bad at all either.
M

I'd say home built as well. But nicely done imho.. I once had a 12 hp Firestone Fairlawn that used a plow frame like that. It set the weight onto the back axle and really helped with traction.

mfrade said:
I'd say home built as well. But nicely done imho.. I once had a 12 hp Firestone Fairlawn that used a plow frame like that. It set the weight onto the back axle and really helped with traction.
Click to expand...

Surprisingly it pushed plenty of wet snow always for me and that was without any added weight except for my 145 pounds of body weight on it. That frame getting the weight to the back axle was nice but my right arm and shoulder didn't appreciate the manual lifting of the blade after an hour of pushing snow!
M

Allenpatterson said:
That frame getting the weight to the back axle was nice but my right arm and shoulder didn't appreciate the manual lifting of the blade after an hour of pushing snow!
Click to expand...

More than a few of us have shared that pain! I believe you can add a hydraulic unit to help carry the load.

mfrade said:
More than a few of us have shared that pain! I believe you can add a hydraulic unit to help carry the load.
Click to expand...

Hydraulic lift would be nice but since adding it to my 129 the 105 will probably get left original with the manual lift at least for a while. Engine is going to be the main focus because it's really getting tired out in its old age and has more than just a little blow by at this point in it's life.

(Here's a picture from last spring of my youngest brother and I pulling a homemade disc we slapped together quick and rutting up my yard cutting and ripping trees out with the skid steer. He got stuck being the weight on the disc because he's got almost 100 pounds more body weight than myself and after a while we eventually got those disc blades cutting through the hard crust and I got the yard back somewhat smooth in that back corner and grass re-seeded. Let's just say the old cub being tired like it is didn't appreciate the extra load I put on it that day) 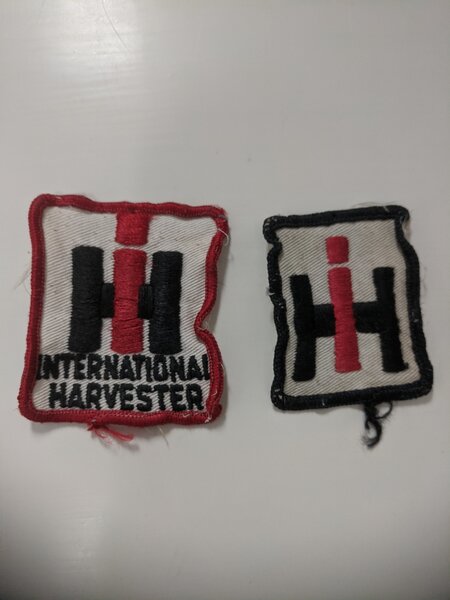 Forgot to post these also. My mother saved all the IH logo patches from my great Grandfather's work shirts and after my grandmother giving me the 105, my mother let me pick a couple of his old patches out of her stash of them.

Nice 105! Very cool that it was your grandfathers. Take very good care of that seat, not many left that are in that good of condition. I have the 125 that my parents bought new in 1969.

kmcconaughey said:
Nice 105! Very cool that it was your grandfathers. Take very good care of that seat, not many left that are in that good of condition. I have the 125 that my parents bought new in 1969.
Click to expand...

I'll do my best to take care of that seat and the tractor is always stored inside but hopefully there is someone out there that does good upholstery work that can do it close to the original look and with similar material. I was just working out in the shop last night cleaning up a little and took a look at that seat again and it does have one very small hole and then one small cut maybe about a 1/2 inch long. I turned the engine over just for the heck of it but it didn't start which was expected without a fully charged battery and a tired out engine along with it being cold out there. Hopefully once warmer weather is here I can get a chance to start working on that engine but as of right I'm in hospital after the birth of my second son this morning so I won't be working on any garden tractors for at least a few more days. Lol

Yes, they can be reupholstered but the blue edging is no longer available so if it ever does require reupholstering be sure to keep the edging for reuse.

Here's one I had redone some years ago, it has a seam where the originals don't but it's about as good as can be done. 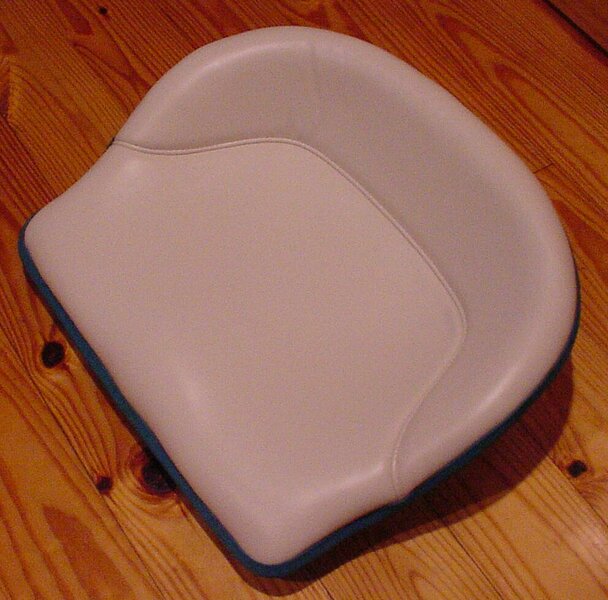 That seat looks very nice! I don't plan on doing a restoration or making it exactly like the day it rolled off the assembly line and even then that seam in the seat wouldn't bother me at all. I've noticed that I have only seen the black edging for sale like the strips of edging that David Kirk sells on his website for on the edge of the hood along the dash cowl.
G

gary noblit said:
Al,congratulations on the newborn..hope all is well!!
Click to expand...

Thank you very much! Mom and baby both seem healthy so far, can't wait to get back home and out of the hospital though!
M

Congrats from me as well! That's great news.

mfrade said:
Congrats from me as well! That's great news.
Click to expand...

Thank you! Now I'll have a reason to get more cubs so the boys have their own tractors also but not so sure my wife will feel the same?

CUBgratulations on the birth of your son!