Everybody knows a cat will find a place to nap, but not always where the owners approve. Below are two photos of one of our outdoor cats (George)who think my wifes planters are a great place to get comfy. 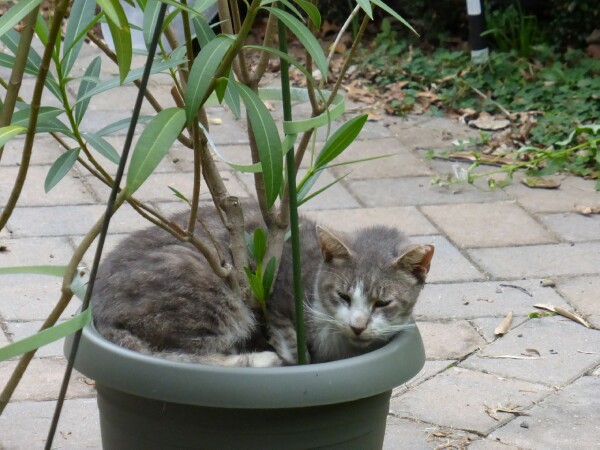 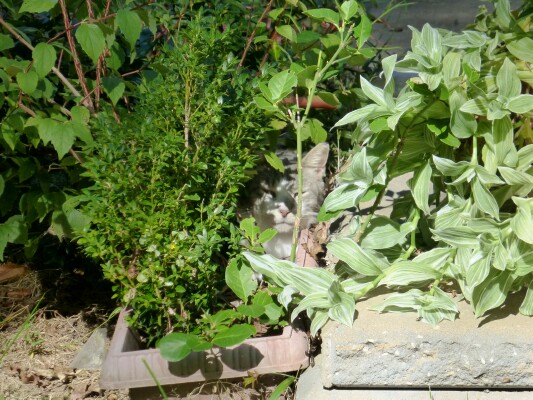 Cathlene, I think Tots was upset at me for waking her up.

Allen, yep, they sleep where they want. Cute pics. What type of plant (a fig of some sort?) is in the container in the top photo?

Selah was sleeping on my lap the other day. 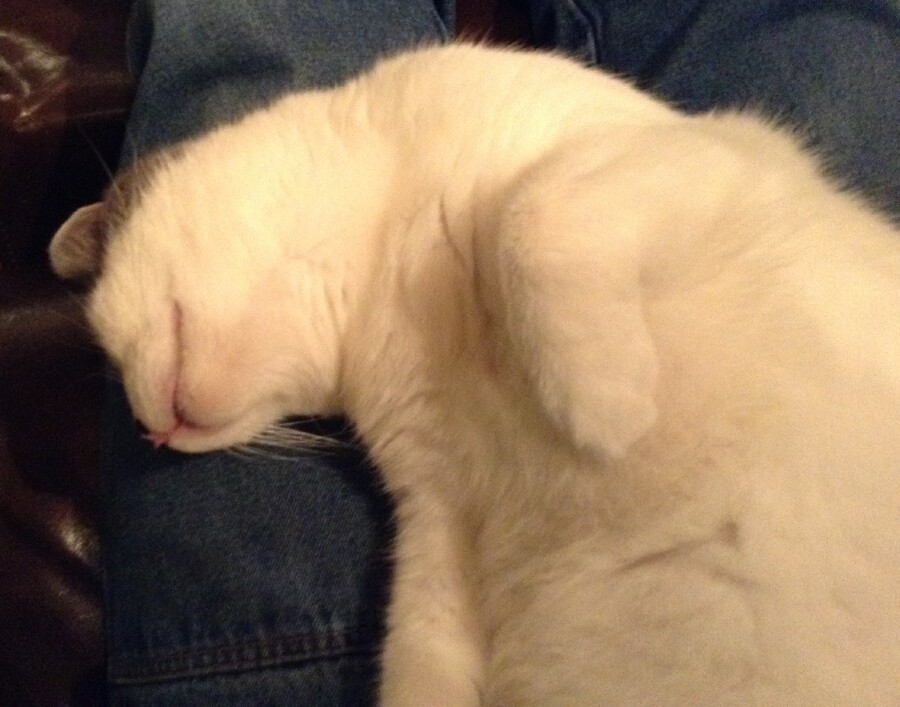 George.. king of the jungle by any chance? maybe that's why he likes the plants..thinks he's in africa on the geat plains..you know they hang under those not so often tree's for shade? lol anddd you know they hide in the tall grass etc to stalk they prey so looks like George is doing what comes naturally..lol

Kraig, that's an Oleander plant. We have three about 4 feet high. They are tropical and will come onto the front porch in the near future. Outside cats only seem to eat grass, and I guess sense that the oleander is poisoness and don't bother it.
Gerorge is the last lion in the field. He just lays around and loves to have nap company by any of the others. Some of the others are stalkers/hunters. Had some mice 'given to us' a few times. We know at least 3 birds got caught and one of them got a squirrel last month! Don't anyone say they are hungry...they get fed very well. Seems to be a built in 'sport'.
A

This is lunch just looking to happen !

Tots would have had that as an appetizer within a few seconds of it showing up.

last sunday morning, Tootsie went upstairs and attempted to wake her daddy up, but he wouldnt budge. He said it was to early to get up. Well, Tootsie didnt think so. It was that, " come on..help me..come on!!!". ( she always does this when SHE gets a mouse. Like afterwards shes not sure what to do with it, so she needs help. She won't eat them. )Well we got up about an hour later and as I bending down to pick up the last night dinner dishes I did a double look, and a long blink to focus on my eyes. I discovered what Tootsie was trying to say. I got a mouse.!! and I put it on the plate for mommy to get. Thanks tootsie.! It was still warm, and laid with great respect on the purple melmac plate. Wow, thats a new one. At least it is better then stepping on one when you are still half asleep. At least this time of year I wear footies. I dont freak with mice, heave forbid here it seems to be a constant. They catch and I release. Thats a good thing. The potato flakes, such a " flakey" idea is working. I assume or we would have more mice. Since the weather cooled off we have only had 3 caught. One got away in the living room and little Annie sat on the end of the couch, kinda hanging over the edge waiting for it come back to where she thought it should be.

The other morning I came across a large remnant of guilted fabric, with bears, wolves, owl on it, really pretty, in black with the animals in gold colors. Anyways, I cut a large piece and covered one of their little fluffy beds with it, which no one was using, and immediately Annie claimed it as hers. lol. Then I cut another piece for a bed for Tootsie. I put it up on her chuch pew and as I was folding the edges under, she stayed right with me, making sure I did it correctly, then she laid claim to that one. The girls look so comfy in their new beds. Then I thought, I have enough left to put a piece over fancys blanket. Hummm, he would NOT lay on it, so I took it back off and he returned to his trustworthy blankie. Don't mess with blankies I found out. Yesterday when Tootsie came down she laid in Annies bed on the floor, and little Annie who has become so respectful of Tootsie, went and laid on Fancys blankie, not to bother Tootsie. She looked rather put out though so I invited her into the living room to snuggle with me, and with that invitation...there she was, and happily snuggled with mom.

Allen, I just watched the video. Ohh, little one, running up to the kitties, are you my mommy? are you? that was a real hoot at the end when the one kittie hauled off and smacked the other one..lol. thanks for sharing

Princess got to spend a few nights in the house recently and immediately laid claim to the Granddaughter's doll house! 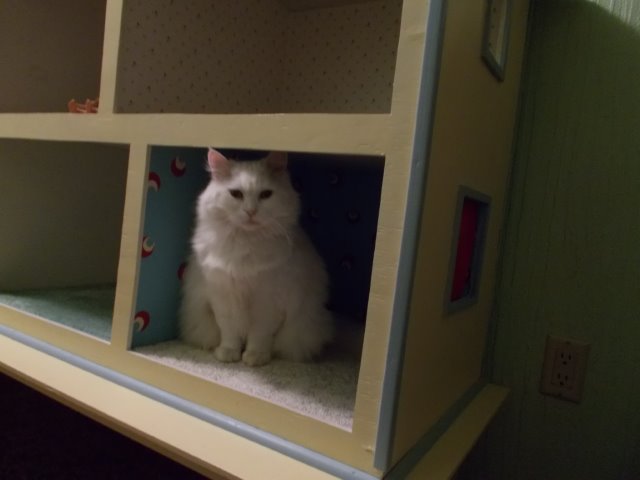 Meanwhile, Pumpkin hangs out in my closet. 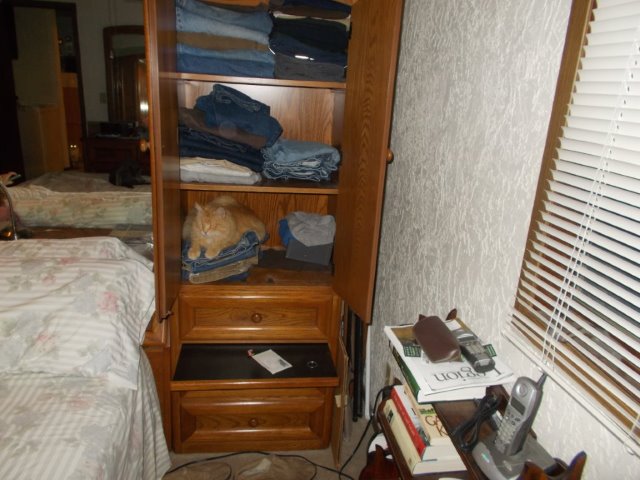 David S. Princess went for the matching white carpet. Now she'll need her own TV, stero system ,etc. And Pumpkin just wants to be near you. Guardian kitty.

David..to cute with Princess in her new digs. She's like," and where else would you expect me to be?". So, is she going to become a partial house kitty? and Pumpkin, isn't it just to normal that Pumpkin goes for the clothes to snuggle on? If Marlin leaves his ditry jeans on the floor, that is where Tootise will plant herself.(also she loves to get up in the cupboards where clothes are kept above the washer and tryer. ) Tootsie and Annie are getting along so amazingly. Last night Annie was snuggled in her bed and Tootsie was about 12 inches away laying on jeans. lol. It's so odd to see them so close and for Tootsie to be on the same level as Fancy and Annie. What a sigh of reliet that she feels secure enough, safe enough to interact and hang so close to the other kids.

Scott, that was great!

Seems we have a new bed for one of the cats, Grrrrrr 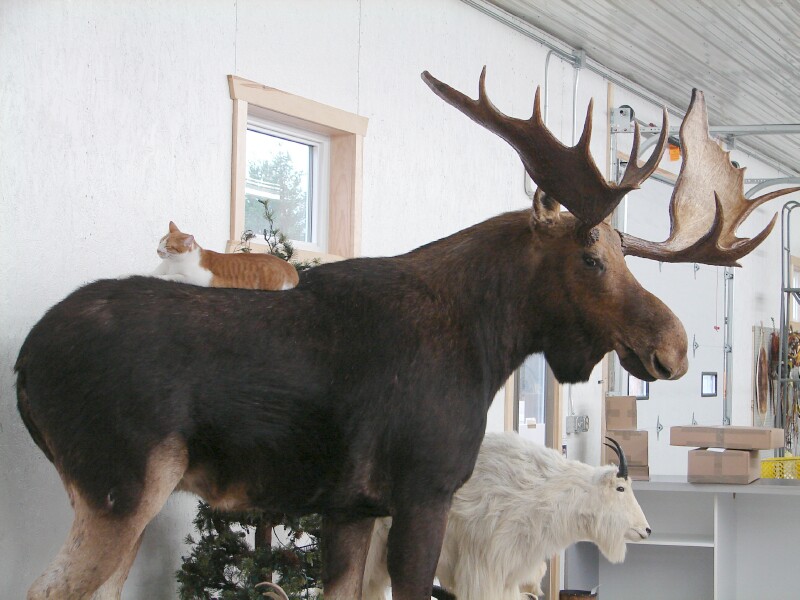 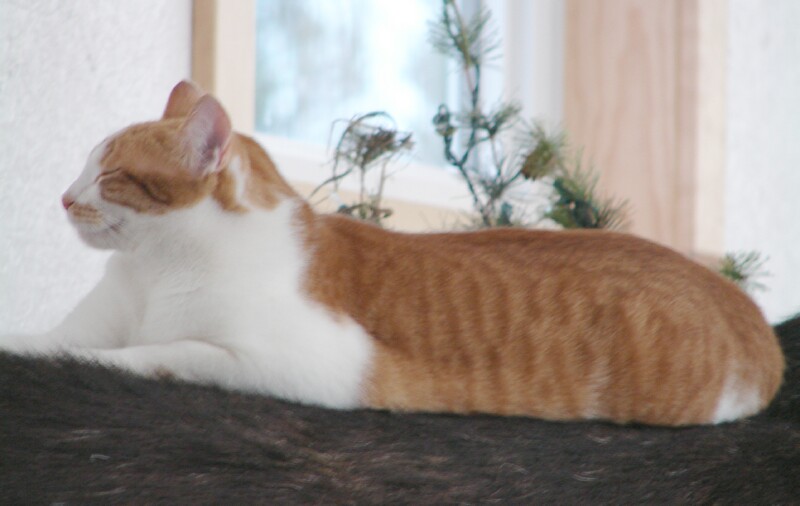 Charlie, it almost looks like the Moose is responding to the cat being there. Too funny!

Here are a couple shots of my Granddaughter's cat, Simba

He is a stray that they picked up 2 years ago, he only has a stub tail, about an inch long.

The 1st one is shortly after he arrived and the next 2 are recent pictures. 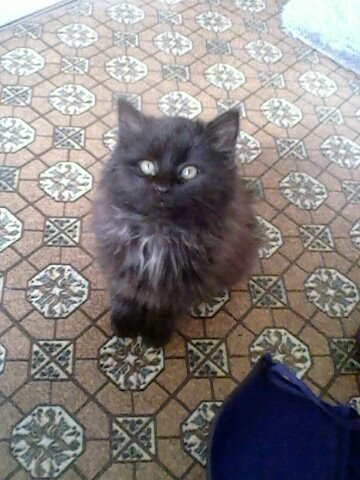 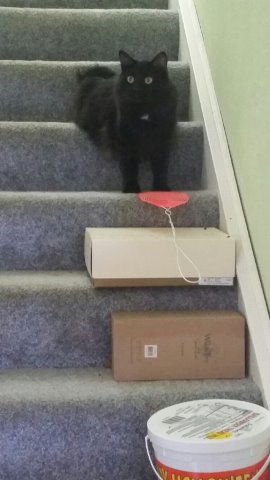 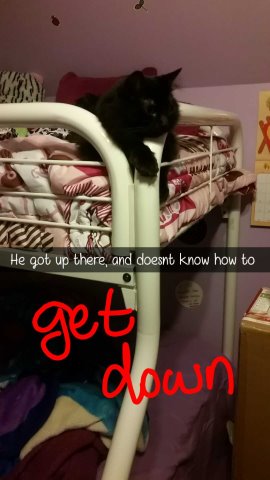 It don't look to me like Simba wants to get down!

How did my cat get up there where you live? 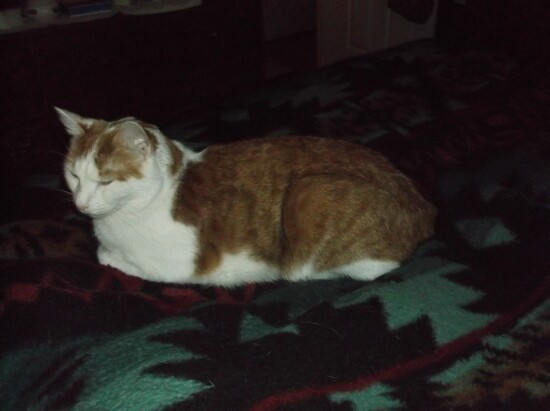 Here's another pic of him while I am trying to eat breakfast before going to work. 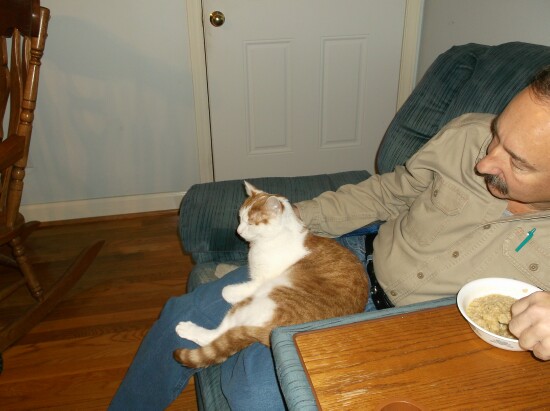 when we were giving Fancy his daily drive after daddy got home from work, we were turning a corner and out of my eye, I saw a black kitty in the ditch off the street we had justed turned from. I said, OH goodness, there is joe's kitty. Well, you might remember the tale of him getting out of the house awhile back, and then Marlin sighted him. Not even a week after that the little stinker got out again.(he's been gone close to few months now I Joe said he tried to catch him, but he started running and joe couldnt keep up. Anyways, we turned around to go make sure it was his kitty, and it was, siting the gold collar on him, so we tore over to Joes house, across the tractor pull grounds like a crow flys..not using streets to get there..and he was outside, so we said follow us..he did and as we pulled up just infront of joe, he pulled up and with that,we saw the Sovanie go running..I thought, oh now, we scared him. NO WE DIDN't.!!! Sovanie went running with happy MEOWS right to joe in his car and he picked up Sova by the scruff of his neck and off home they went HOME.!!Joe stopped that evening,to thank us for sighting Sova.!! He was still on cloud nine, and then he said he was heading to the animal shelter to pick up another kitty. I hope it is going well for him and Sova will like his new pal. I'm thinking Joe was thinking maybe if he got a friend for him, he won't sneak out of the house. Dont know about that, but watching a kitty go running to its daddys car and await being picked up and singing such happy meows so cool.. As Joe calls Sovanie his " dog". ...we understand that.