Well, Seems as though Princess is really taking to this housecat thing and has found a new favorite spot in Carolyn's sewing room!

Much better than my dirty old shop, however, she does come to visit from time to time if the door is open. I had to rescue her from the loft last week because the ladder was nearly straight up and down and she couldn't get past the 1st upper rung to get down! 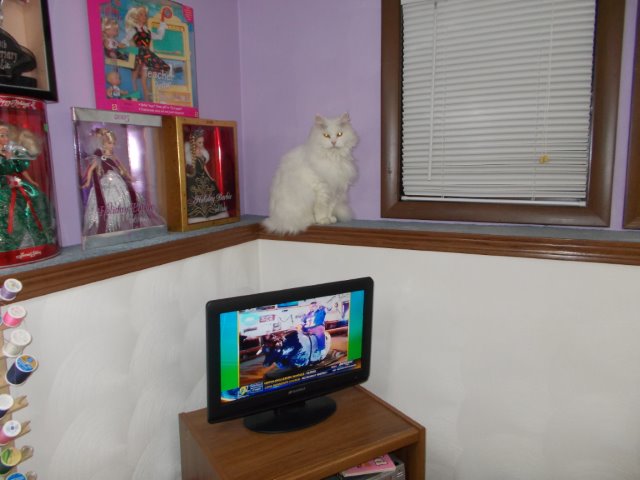 Princess knows that she is now an offcial house kitty in the winter and in the spring and summer an all purpose indoor/outdoor kitty.
C

Nothing like some southern sunshine in the winter to warm up the kittys sleeping spots.

David, well purple is a royal color, and I must say that Princess looks very ROYAL against the contrast of those purple walls. Nice to hear she is loving the clean living in the house. lol

we had to take Fancy to the vet last week. He got to sneezing really bad and so had him checked. Vet wasn't sure if it was sinus infection or allergies, so she gave him both shots to cover things. He got a antibiotic and also a steriod for the sniffles. Vet thought he might be having an reaction to the junk,by proudcts in the dry and canned food.So everyone is eating chicken flavor in blue mountain brand, that is darn expensive. Will look at alternatives for the other three kitties. They dont eat nealy as much of the expensive stuff then they do the normal purina. Intersting. I guess the good stuff is more satisfying and nutrious. Also have weaned everyone off the wet food. There isnt anything good about wet food... Everyone loved the chicken flavor Blue Mountain that we picked up.
A

The poor vets, we expect answers from them about a pet that can't talk. ...Maybe he has an allergy to certain foods, but he's been eating it for years, and has a reaction now? My wife reads all the stuff in all the dry bags. One has to start paying $30+ a bag to get something thats really 'healthy'!, like Blue Mountain. Wife says outside cats have to eat well too so they get $28 a bag stuff. Indoor and outdoor get some purina moist food. Everyone seems to like Chicken+liver or Marinerscatch pate. Outsiders also get some yougert and L-Liscene mixed in to try to keep their immune systems working.
K

Thought this was cool... 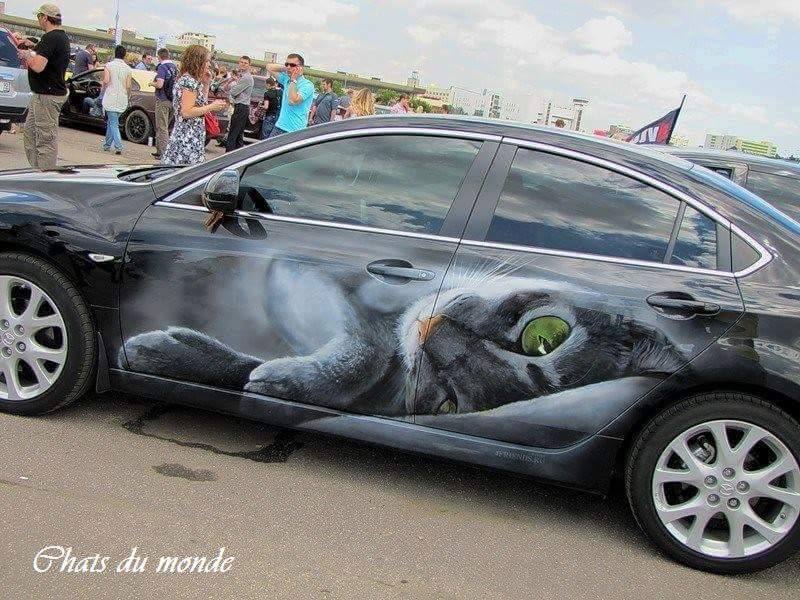 Keith O. WOW!!! That's beautiful. It reminds me of the gentleman from Ames back in 1998 that paid $3,00.00 to have air brushed on both aisdes of his Ford pickup a Bengal tiger walking in an early morning mist.
W

Apparently cats like cold...I mean cold weather more than I ever knew. It was 6* here yesterday morning and I didn't want to let them out until the temp came up a little but nooooooo, they had to go out. I'm also concerned a little about the heavy coyote population we have here.

Barney, my only male cat goes off and I assume hunts birds or whatever. He will not come to any calls until he's ready. Yesterday he left at daybreak and stayed gone a couple of hours. I even walked back to the edge of the woods and called him to no avail. He always shows back up a little later in the morning. Graygirl doesn't seem to like the cold as much as the younger cats. She is usually the first back to the door wanting back in. Millie can be good at ignoring me as well. She doesn't go far but if she hears anything or is occupied in some way I get ignored. Lynda, the youngest, does her thing but is never far away or so it seems. She really likes the food bowl and is a little overweight.

I'm just curious; do cats really like the cold? I guess the main reason why I'm confused is Graygirl goes right under the wood stove when she returns. Millie does the same thing. Lynda goes straight to the food bowl then likes to find a napping spot for several hours. Barney just wants back out after a small snack.

Our big male Pumpkin is the same way. He has been "fixed" but still wants out most every day no matter what the weather. He'll just hunker down in the sun somewhere next to the house.

The other day he came prancing back up from near the shop with a mouse. Good Job!!

Princess was out yesterday for a while, she had followed Carolyn to the shop and then just disappeared. I went back later and found her curled up on the seat in the cab of the 1200.

I think the whole crew is gettin' a little case of cabin fever. I know I am!
A

How to get attention...
http://blog.theanimalrescuesite.com/cats-say-pet-me-meow/
C

Catching up on reads.

Took Annie to the vet yesterday. Ended up being a inner ear infection,so she got meds and seems better. It was her first trip to the vet since we found her. She was NOT happy with me on the trip over, and honestly I felt like such a heel putting her in the carrier. Infact, before that I called for her to come down from upstairs, which she will always respond. Yesterday? nope. lol. I had to go up and Fancy went with me and there she was UNDER THE BED...HIDING. to funny. She would not come out. Now, exactly how did she figure out she was going " somewhere"? So Fancy peeks at her under the bed, coaxing her out..and then the mommy abuse happened. poor girl. On the ride over she complained alot and I thought talking to her would help? everytime I said something, she screamed louder at me. So I had warned them she can have a relly bad attitude at times, but of course, she was a complete sweetheart there. doc brought up the fact she hasnt been spade, our bad and asked the cost and she said 70.00 and was apologetic..saying it woudlnt be so expensive, but she by state law she also has to give a rabies shot. 70.00 is NOT expensive for a spay.. lol.

Allen, enjoyed the video. the first kitty, with the guitar. That was hilarious. Annie and Hannah are the two here who demand
PETS..MEOW..please.! lol. If I am sitting up watching TV, annie always sits right in front of me on the couch and stare me down..wanting pets. she'll reach out and touch my hand with pats, or likethe other night I was sitting with the remote in my hand and she was sitting staring. everytime I used the remote, SHE thought I was giving IT attention and such would then attack it and bite it. that was sooo funny. she is also one to take my glasses off if need be. Hannah will sit in front of you on the comp and being ever do careful NOT to touch the keyboard, will teeter on not much desk space to reach out and give you loves pats on the face..its like ok I give you pet, now you give me and it continues on till she has had enough pets.

I think any kitty who has been outside likes to return to it, even if they are house kitties. Fancy loves being out, even in the cold for a few moments to enjoy the FRESH Air. although since he ended up sick, when I take him out everyday to go for a ride with dad in the truck, it has been so blasted COLD I bundle him up in a big towel, since hes so big..lol. Marlin said it looks really funny..this big blob of a blanket,an off white color with little black legs dangling out the bottem of it. Today was the first day in a week that he hasnt' had to be protected from the frigid temps. how nice that was..but more cold and SNOW IS headed this way today I guess. We are in a winter storm warning as I speak. sigh. We still have ice on the ground and piles of HARD HARD snow banks from the last storm. At least we aren't out east or in the artic, although it feels that way.

OK odds makers, how long do you think the 'cute little chick' has before becoming a toy or lunch. Especially messing with its whiskers!

Thanks Allen for sharing that link.How heartwarming that was.

How are all your kitties doing?

Everyone else? Any upsdates, stories to tell?

I have seen other habitats, privately owned, who also have homes for kitties only..from adults, down to the kittygarten area..lol.

Did anyone watch a week or so ago on National Geographic the shows " Animals that Love" or Animals that Grieve?". I wept thru both of those shows. Finally showing that animals do have great intelligence, and that they DO love and have all the emotions as we do.Also grief. The one flaw of Man..HATE, seems to be absent in the animal kingdom. Perhaps it is true that if one looks to nature and how animals live, respond to their lives, it would allow us to follow their lead to live with some sense of continuity? And it has been said what man does to the beast..hunt and kill them into instiction..man will do to man..hence the hunting of killing of man by man. hummm...pondering that.


A Visit to Aoshima- a Japanese 'Cat Island'

Charlie, that one is a classic! One of my favorites. Funnier every time I watch it.

One of my sisters has two cats and two pugs. One of the cats, Taco, loves the pug named Angel, and relentlessly snuggles up to her. Here's a link to a video she took of Taco tormenting Angel.