I think I have an incurable disease

in short... this is coming home with me on Sunday! I think I have a disease and I don't think there's a cure for it 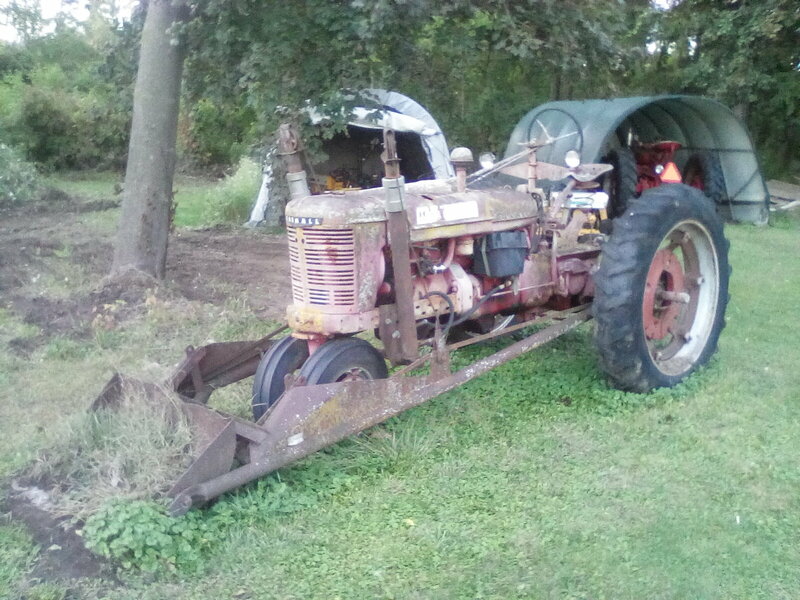 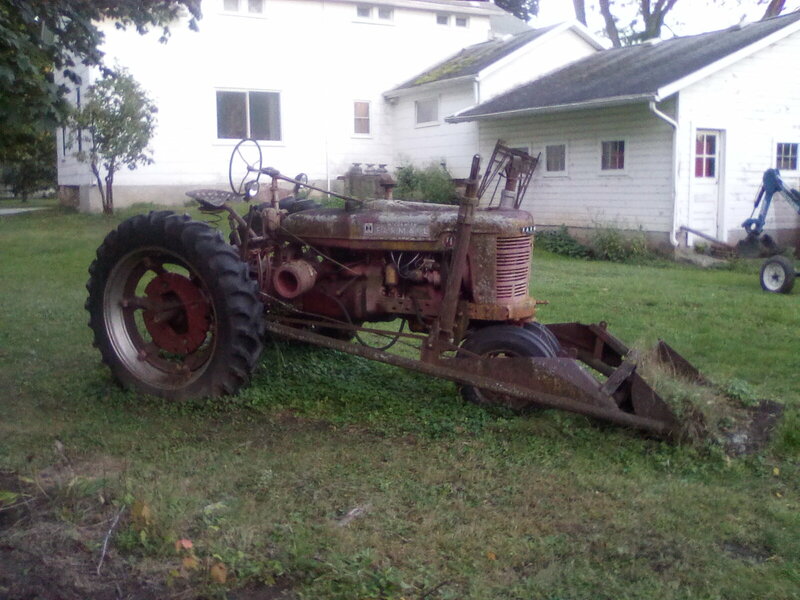 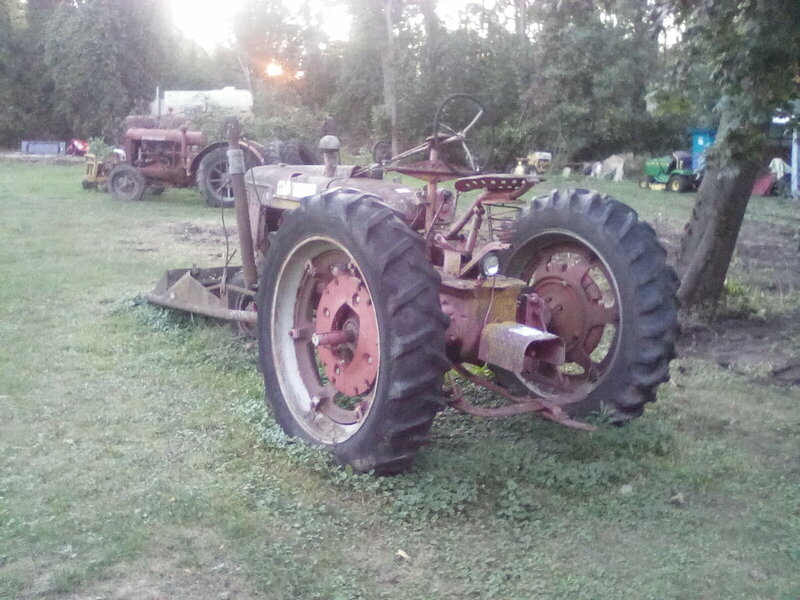 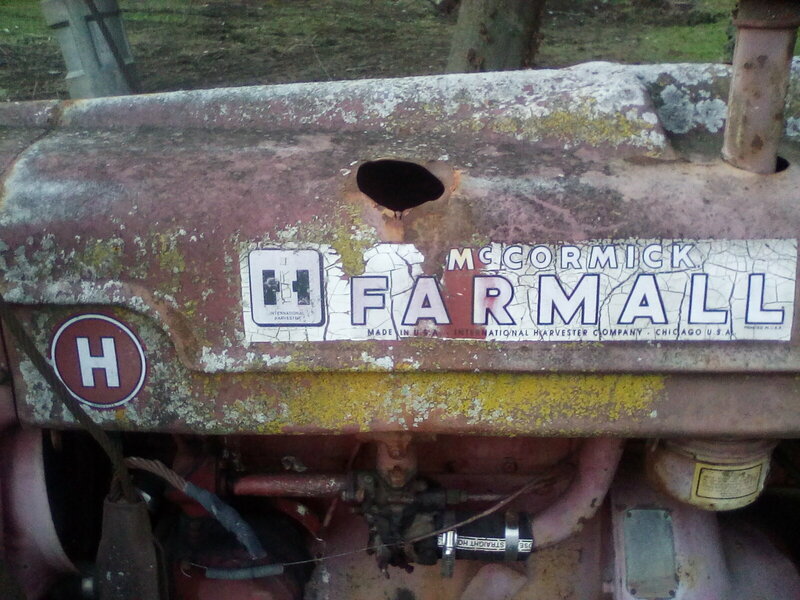 I just posted about my own problems with auction items. Your problem is on a much larger scale.

I'd say you have a variant of Yellow Fever. There is a yellow stripe on the hood of your new machine.

We love photos, but why don't you fill the uninitiated of us in on this a bit. The scoop looks purpose-built, or at least it doesn't look like your standard loader, but are those upright cylinders I see?

jkoenig said:
I just posted about my own problems with auction items. Your problem is on a much larger scale.

I'd say you have a variant of Yellow Fever. There is a yellow stripe on the hood of your new machine.

We love photos, but why don't you fill the uninitiated of us in on this a bit. The scoop looks purpose-built, or at least it doesn't look like your standard loader, but are those upright cylinders I see?
Click to expand...

I don't know too much on the history of the tractor. Obviously it's an H, I believe (If I read the serial number right, tag is pretty faded) its a 1946. Its been sitting for 3-4 years, and it did run at that time. Engine spins over by hand and has compression. I know the guy selling, he's actually a friend of ours. Same guy I bought my 106 from actually. He knows his stuff (his collection currently consists of 24 tractors!!).

The man who owned it recently passed away unfortunately and they are working to clean the property up. That's why you can see some other equipment in the background of each photo, there's a lot of stuff there. Unfortunately for me, all the Cub Cadets were going to the guy's son, so none were for sale.

As for the loader unit, it is quite the contraption. Those are upright facing hydraulic cylinders. They push upward onto a pair of pulleys, which pull on cables that are attached to the loader frame, which in turn raises/lowers the loader. I have no idea if I'll keep the loader or not, I may remove it.

I know I need to clean the carburetor, clean the points, get a new battery (its been converted to 12 volt which is convenient), and drain the water out of the exhaust manifold (it hasn't had water in it for long, the exhaust had been covered until very recently. We just got a lot of rain here so it makes sense that it filled the manifold). Plus I need a proper exhaust pipe for it, this is a great opportunity for a big wide straight pipe.

I also got this hydrostatic hood, yeah the hinges are long gone but you can't beat free! I believe this may have come from a 127. 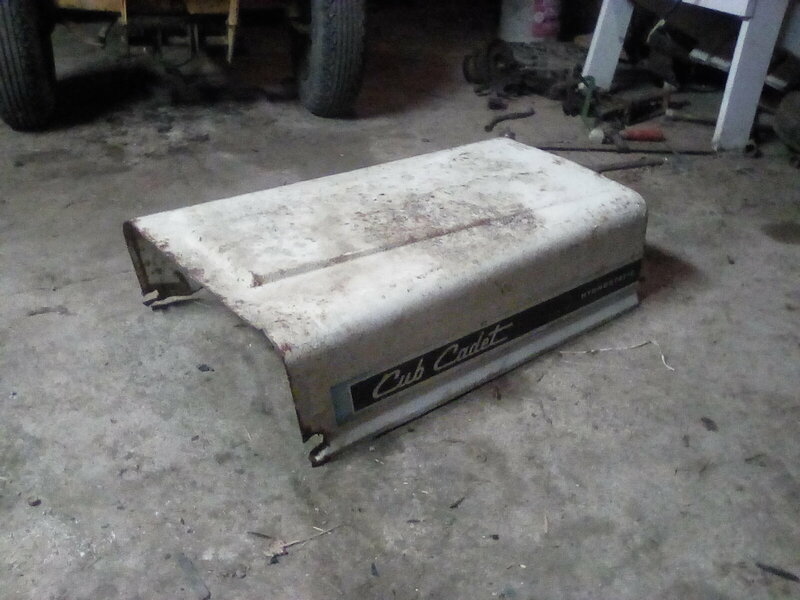 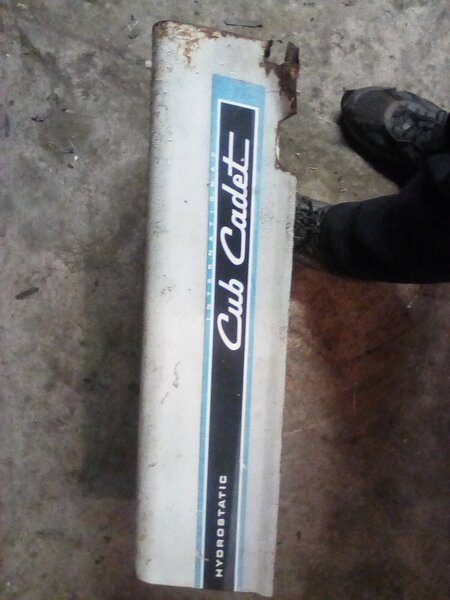 jkoenig said:
I just posted about my own problems with auction items. Your problem is on a much larger scale.

I'd say you have a variant of Yellow Fever. There is a yellow stripe on the hood of your new machine.
Click to expand...

I'm really lichen that yellow stripe that's on the hood of that H...

I have seen that loader used to load manure spreaders. Not sure who manufactured them. Also seen on 40-50‘s Deeres. Believe there was a rope or cable to trip the bucket.

You should keep the loader on it if going to fully restore and take to tractor shows.

Well, at this point the plan for it is to leave it be cosmetically, it may be a future restoration project eventually. The loader has a tag on it, I think it was built by New Idea but I can't remember.

Restoration plans and lichen jokes aside, she came home today and I'm almost ready to attempt firing it up. Just waiting for a battery to charge.... 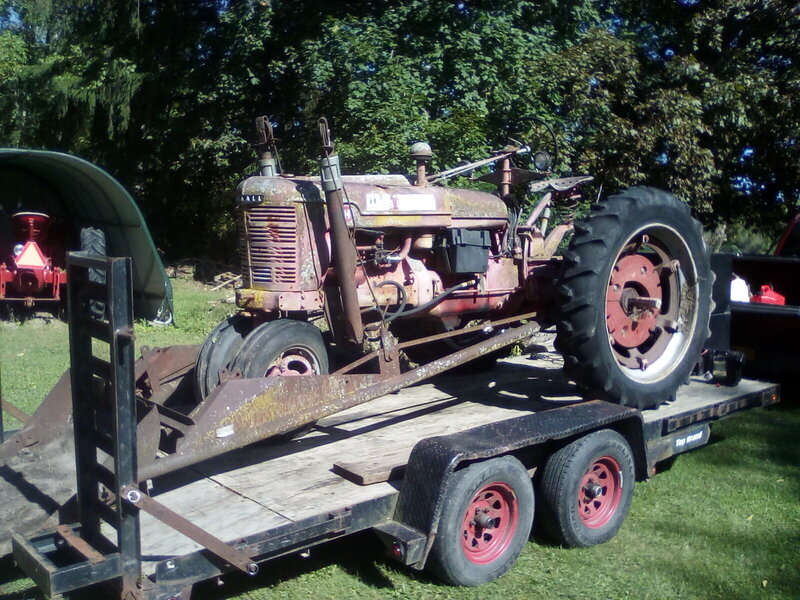 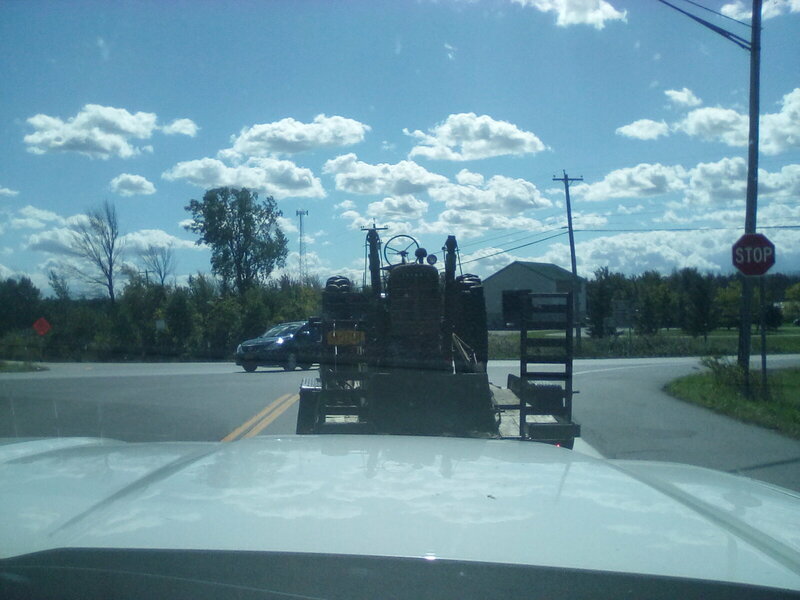 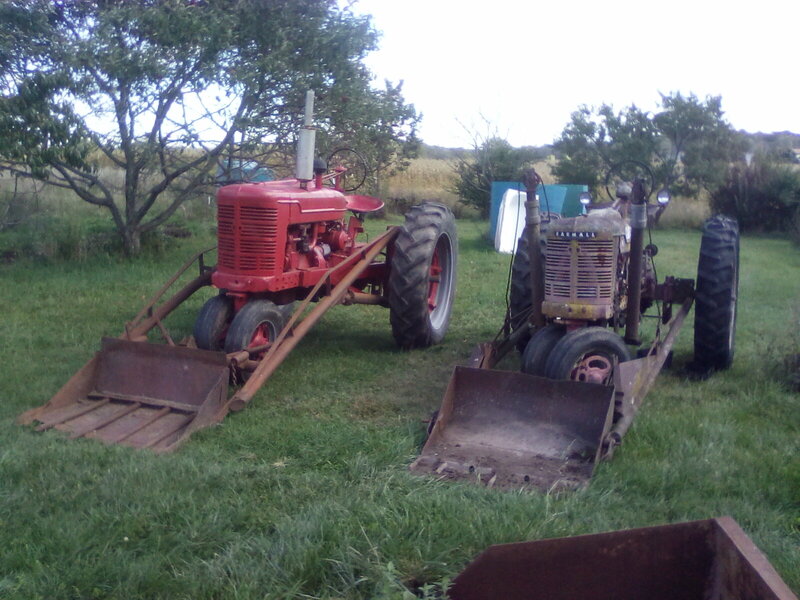 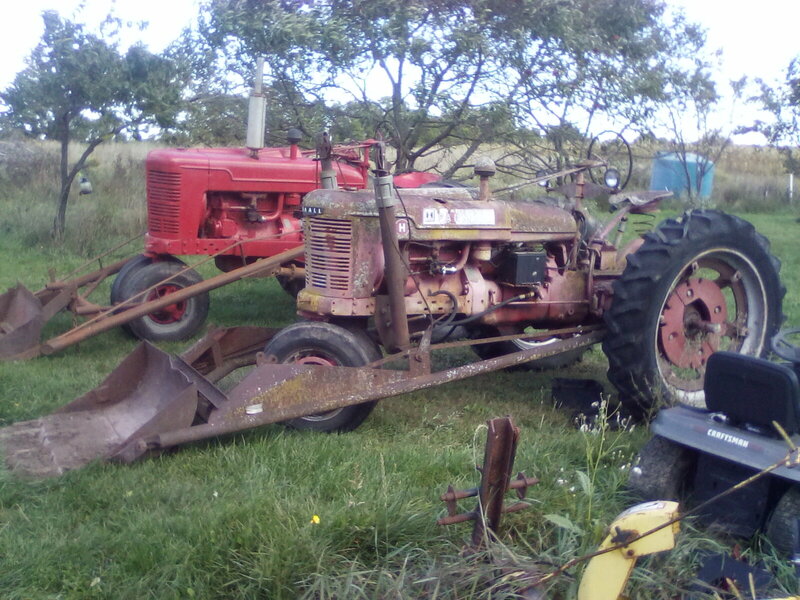 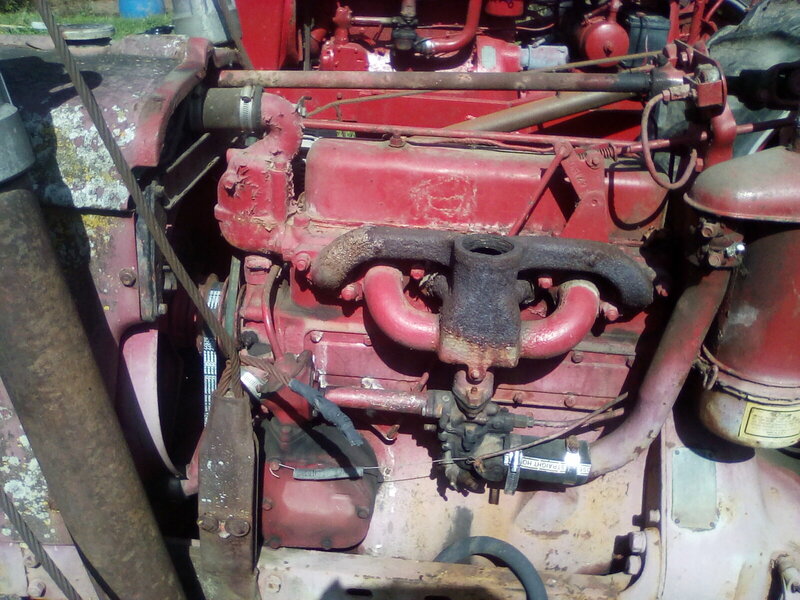 Okay, I'll spill the rest of the info on the tractor now.

I have determined that it is a 1946 H. The loader was indeed built by New Idea, although I cannot remember what they called it. It's on the ID tag for the loader, so I'll have to have a closer look some time. The bucket trip mechanism is much more solid and reliably built than the bucket trip on our M. We actually have a second cable on the M's bucket trip, that we have to pull on in order to keep the bucket from tipping because otherwise it'll just shake itself loose and tip the bucket at the worst possible time...

So after getting it home, the first thing to go was the plastic battery box. Pulled the hood off it and then pulled the distributor apart to get access to the points. They were definitely in need of a good cleaning, and I will probably replace them soon as one of them has a pretty good pit in the surface. Then I went after the carb, I just had to pull the bottom half off as it was pretty clean and there was nothing blocked off in the upper part. I will be buying a rebuild kit and rebuilding the carb soon. Partly because I have 2 leak spots on the bottom of it now due to seals that aren't sealing anymore. I had to make a new gasket for it since the old one tore, and I think my custom one might be better than the one that was on there- it didn't leak a single drop from around that gasket.

So with the points cleaned and carb cleaned, now I needed to figure out a power supply. The battery it had in it was long dead, so dead that the charge would drop almost instantly as soon as I took it off the charger. I ended up stealing a big 12 volt battery out of an old diesel pickup truck we have sitting around that won't start. With the large battery, the engine cranked over easily. I checked spark and had good spark. So I made the first attempt to start it. No luck. I opened the main jet on the carb 2 1/2 turns and tried again- fired right up!

The sound of it with no exhaust pipe at all is crazy, but kinda cool at the same time. It doesn't run perfectly smooth, another reason the carb will get a rebuild soon. Despite how rusty it is the oil pressure gauge even works. After letting it run and warm up for a bit I began testing things. The belt pulley works, the PTO works, the lights all work, and the loader works too! In case something goes wrong with them the tractor came with a set of spare hydraulic cylinders, which is nice. The last thing to test was how it drove, and it actually drove well.

So that's where I'm at with this thing. Far from done with it, gonna rig up a straight pipe for the exhaust, rebuild the carb, and replace the points, as well as make the wiring a little neater. Probably will remove all the lichens growing on it (sorry Kraig and Jim!) and try to clean up the paint underneath. 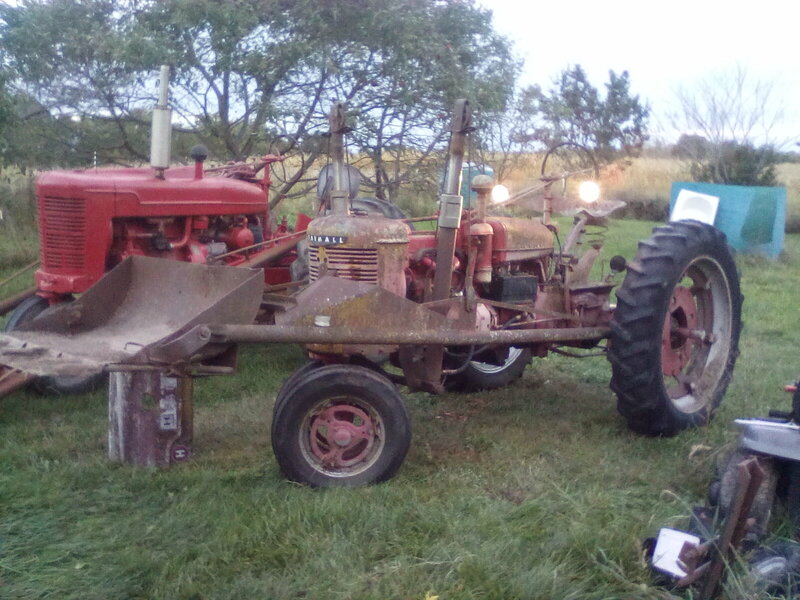 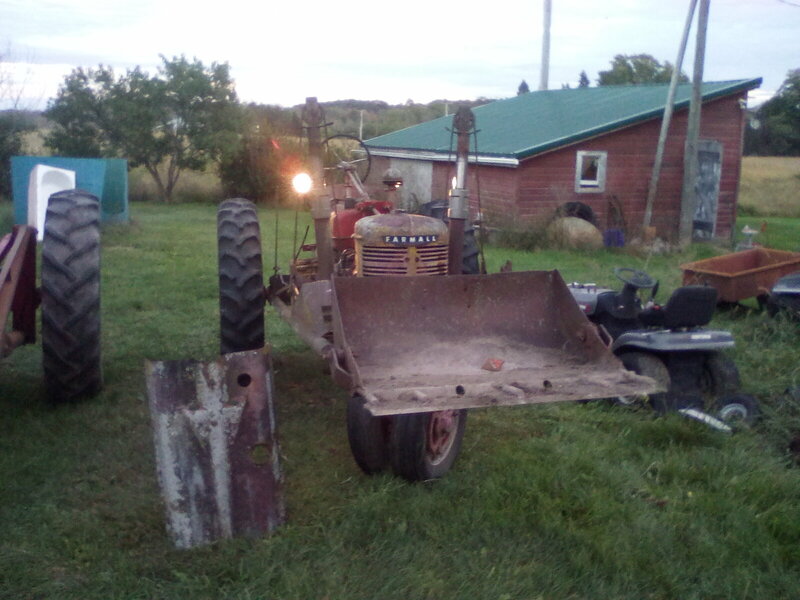 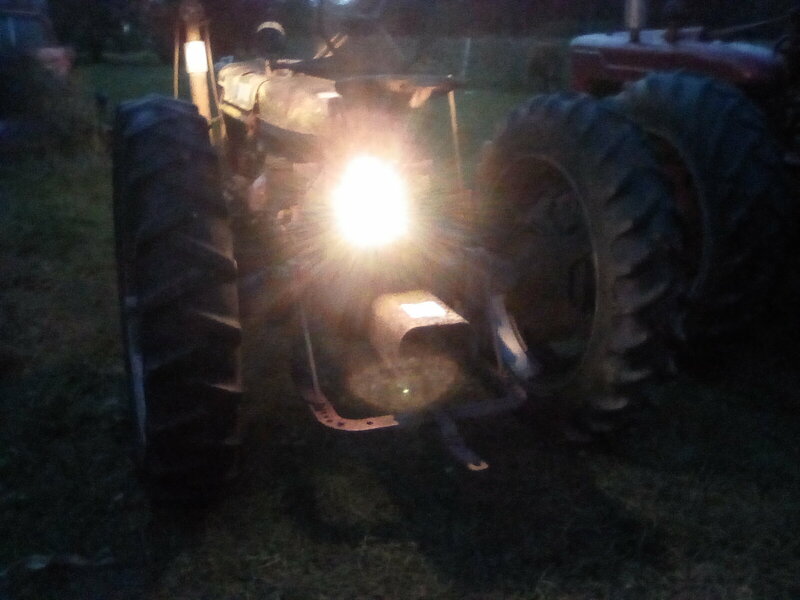 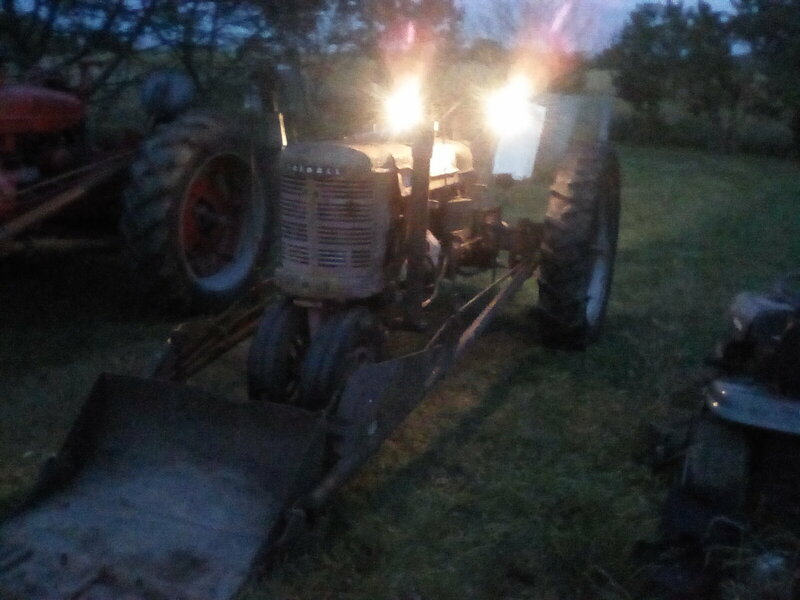 Messed around with it last night. My left side hydraulic cylinder has developed a leak due to rust at the top of the cylinder ram. Gonna take a wire wheel and some fine sandpaper to it and try my best to limit the leak as much as possible. 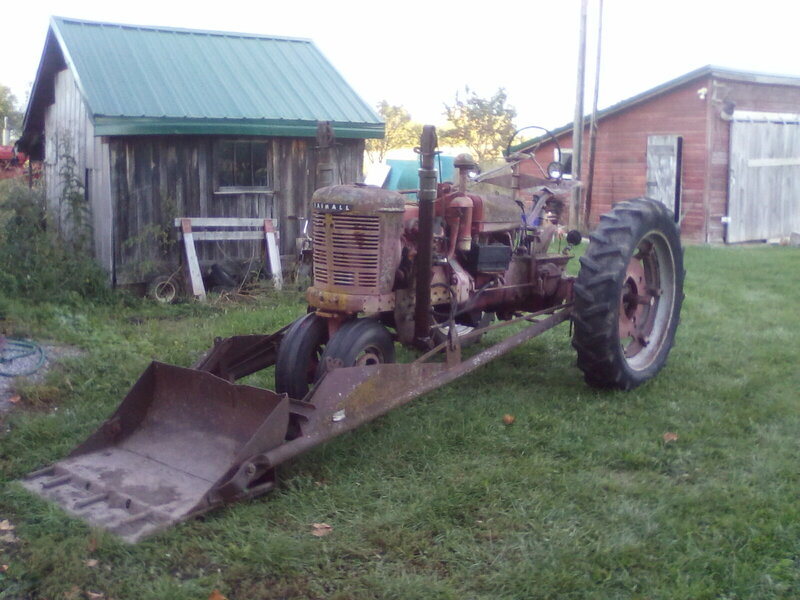 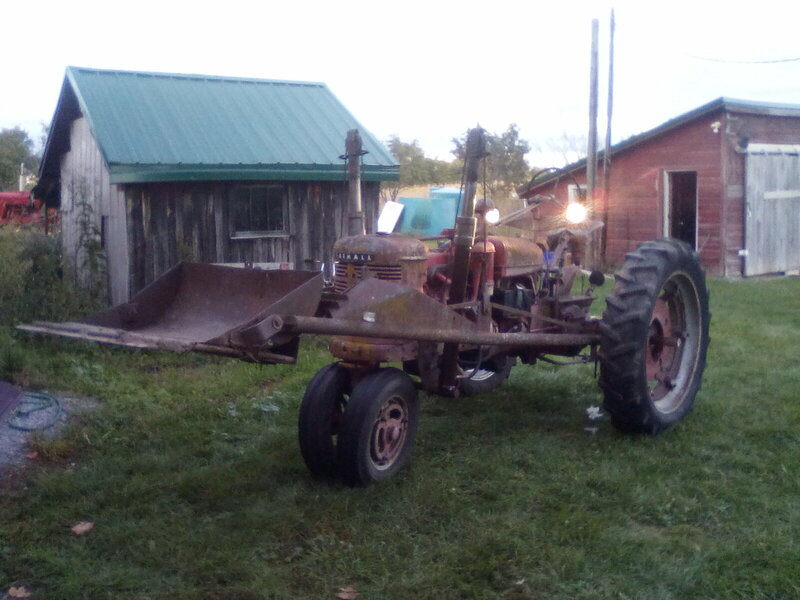 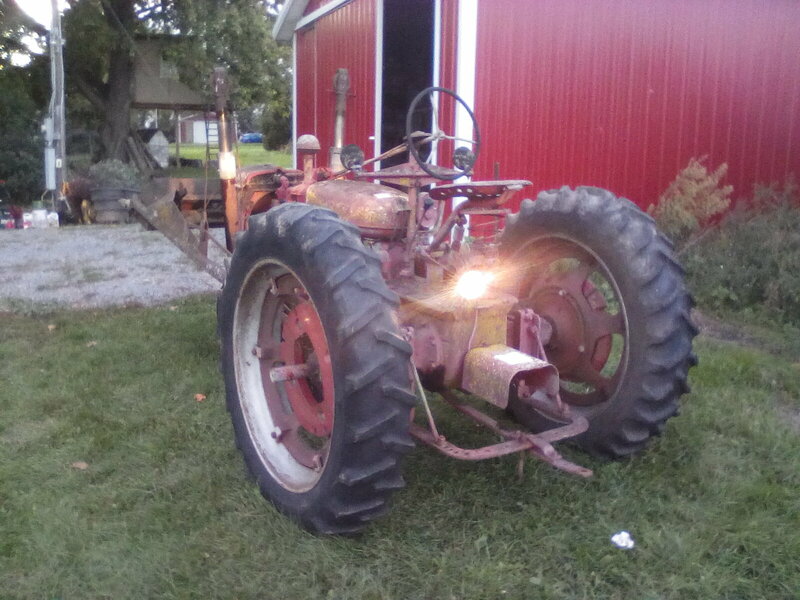 Also, am I the first one to make HydroHarry speechless???
J

My brother-uncle used to use bailing twine as a cylinder seal. Every so often, he would clean out the old twine, and wrap some fresh twine around it. He learned it from the guy he bought the tractor from. it was probably used that way for decades.

edit: JP, 5 words just may be his shortest post ever.

JPrattico said:
Also, am I the first one to make HydroHarry speechless???
Click to expand...

Yesterday me and my neighbor made up an exhaust pipe. He has just about every odd tool you could ever need. Then we seeded his field with a winter crop, and I put the H to work rolling the field smooth. 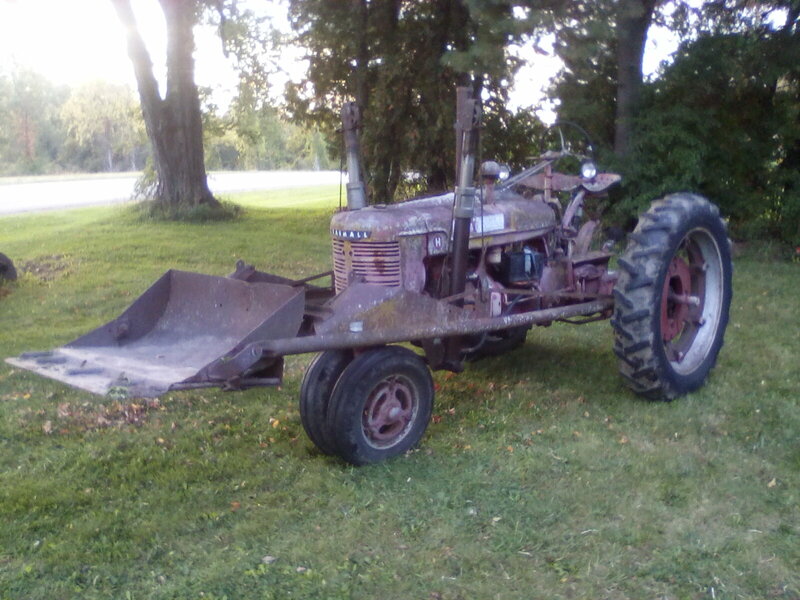 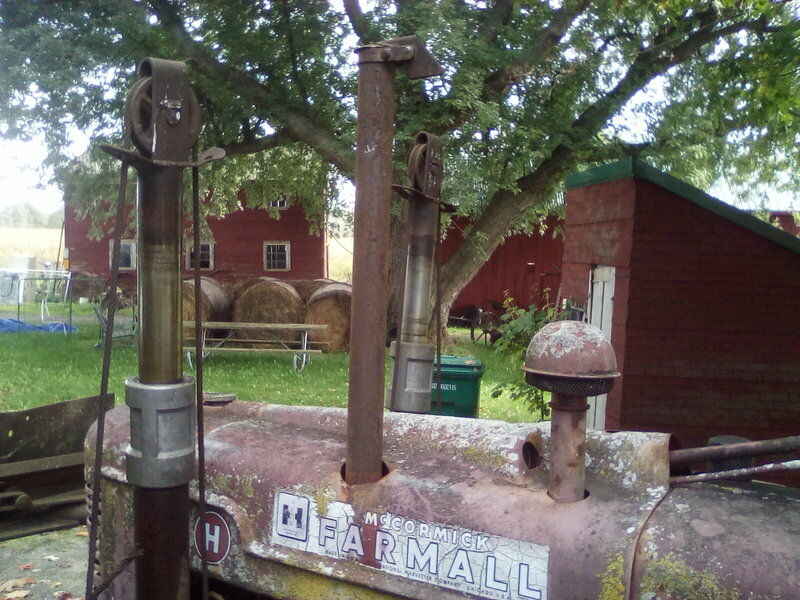 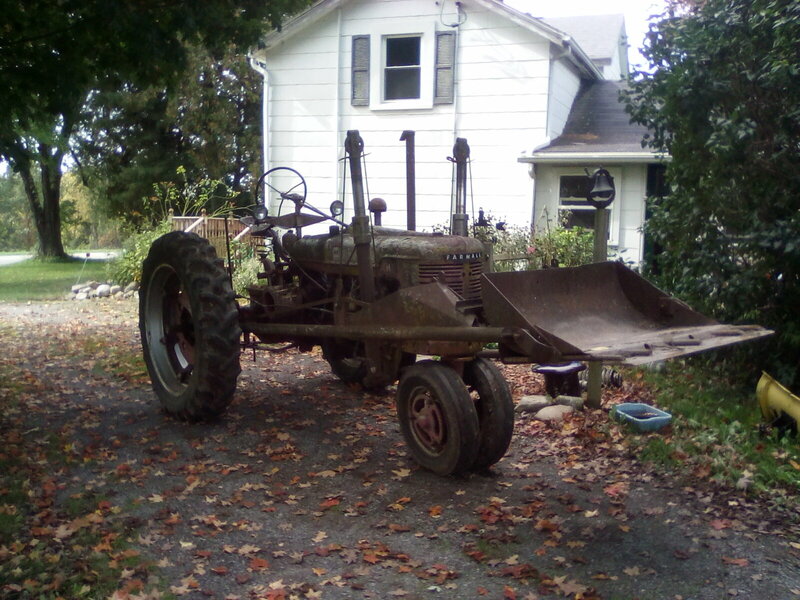 Ok I'm going to post this here hoping someone can help me... I need guidance to determine if Amazon sent me a brand new $40 piece of junk or not.

So I made the discovery that there was way too much coolant flow through the radiator. It became clear that the thermostat is stuck open. So, I ordered a new one, $40 aftermarket part. However when it showed up I was absolutely perplexed by the fact that when I opened the package it came out in 2 pieces???? I do not have experience with thermostats but to me it looks like quality control is nonexistent in whatever Chinese factory makes these things, and it didn't get assembled properly. 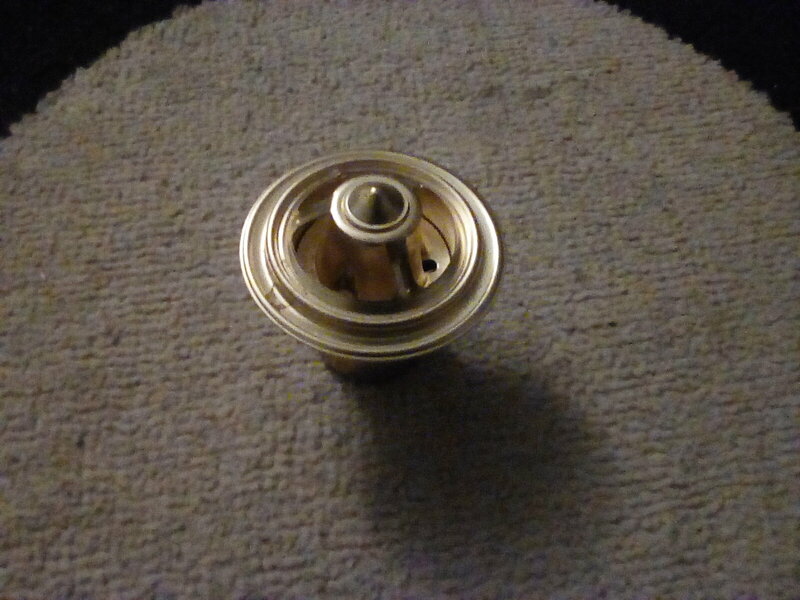 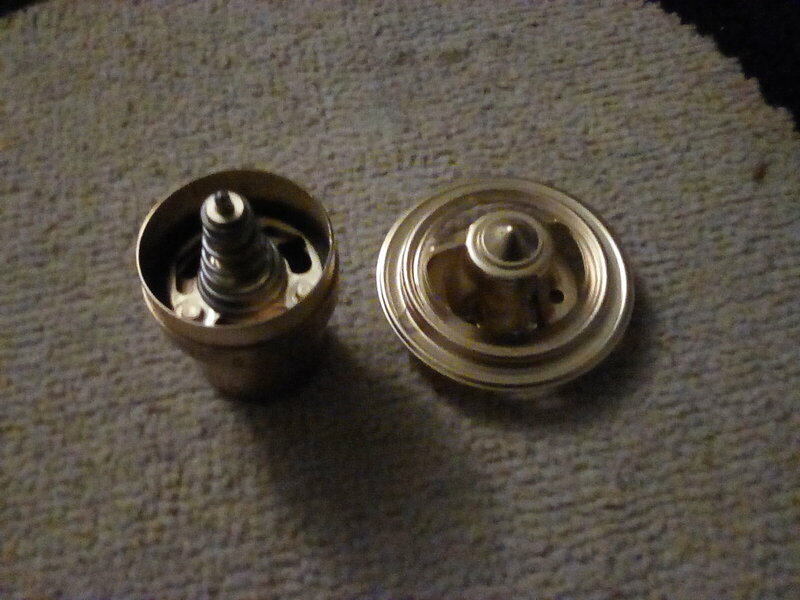 So my questions for you, is this actually how its supposed to be? I don't think it is, but again I haven't ever replaced one of these before. And if I'm correct with my assumptions, is there any way to fix it and not have to order another?

While I'm talking about the H, I figure I might as well share this picture-perfect moment for you guys... I went on a mission to go grab our old Hay Rake from a back field where we did a little bit of hay. While hitching it up I realized that it's an IH rake, go figure! When I got back to the house I stopped right in the perfect place for a cow to be in the background. The clouds looked cool a couple minutes earlier but I had to run in and get a camera so I missed them. 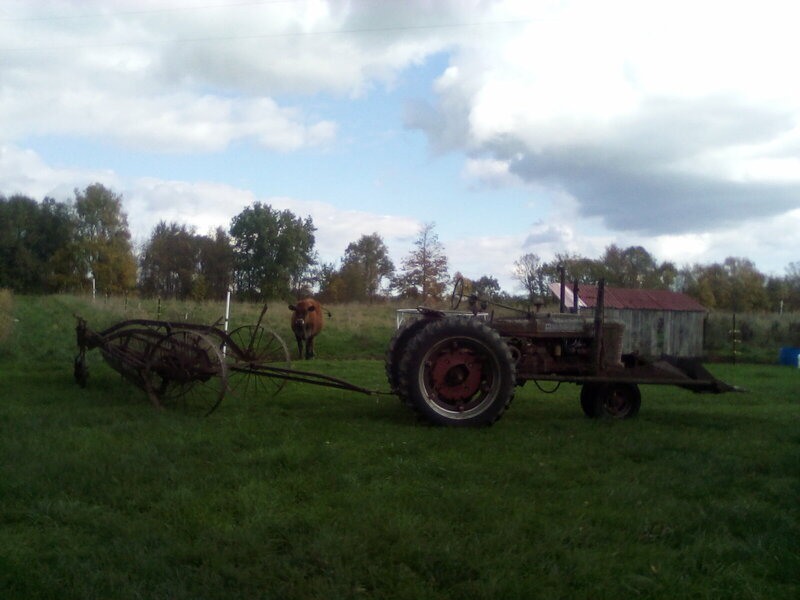 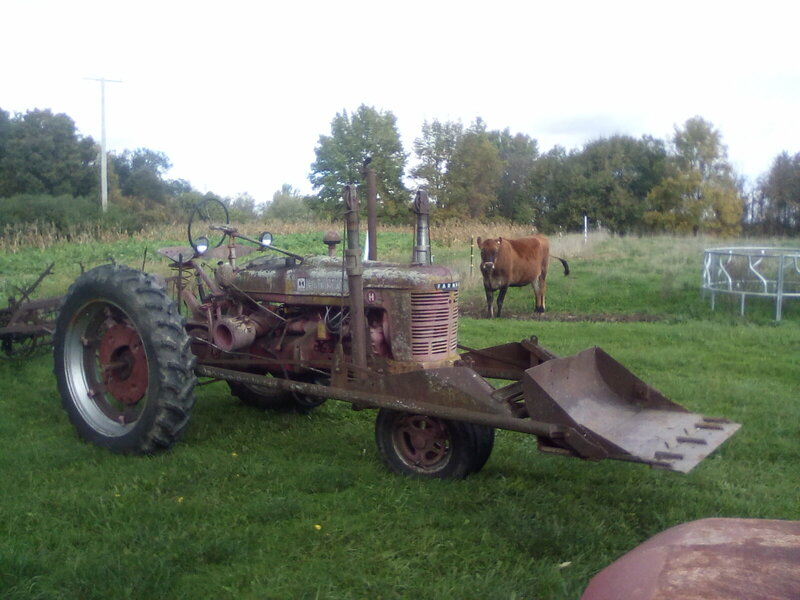