Your Cub Cadet was built in Louisville, Kentucky, at the International Harvester plant. Over the years the plant was known as The IH Louisville Works, or IH Louisville Plant. The place was built as a Curtis Wright Aircraft factory in World War II, and was bought by IH after the war. IH built other tractors there (Farmall Cubs, Super A's, C's, Super C's, some M's, and others. In later years, tractor "skid" units built in England were shipped to Louisville and finished here with loaders and other equipment. The plant closed in 1984, and was demolished in the late 90's. It was adjacent to the Louisville International Airport, and was torn down to make room for a new 10'000 foot runway. The 5'000 foot mark of that runway is just about where the center of the IH plant was.
E

Thanks Paul, you guys are just so knowledgable

It's still kinda sad to think that my IH cubs remain, but their birth was buried so long ago...

I really need to rent a Corporate Tragedy from the library...

Been a couple years since I was by the place but a guy from RPM forum says it hasn't changed since I saw it. The motor building & main gate are still there, and everything west of my old tire automated storage & retrieval system, which was just east of the water tower.

One of those days... finally a dry, calm day to spray my lawn for weeds. I just finished spraying and was going to rinse out the tank, when the right tie rod end broke on the 1250. Reminds me of the old saying, "When you come to a fork in the road, take it!" 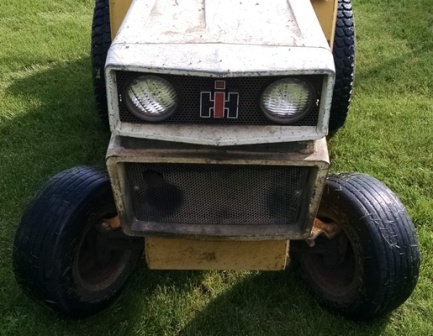 At first I thought this might be a sign that this was going to be "one of those days" when nothing goes right. But then I remembered that I bought a spare set a couple of years ago. 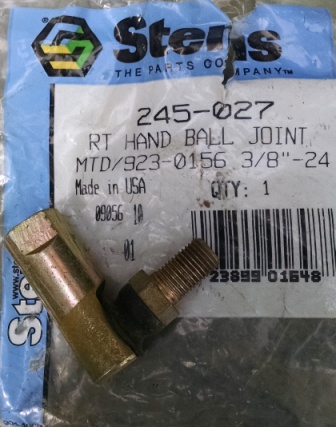 Our grandkids are coming tonight to spend a few days with us and the grandson would have been really bummed - he loves taking his little sister for rides around the yard in a trailer. Turning out to be a good day after all!

Your right Denny, thought that after I typed it.....

WOW! That picture reminds me of seeing my 1200 when I returned from the gas station when the 1200 was pretty new.

I had an opportunity of teaching my daughter to drive, recalling my own driving lessons cultivating, plowing, mowing etc., seeing the 1200 mowing with the fronts spread out.
I asked what she hit?
Nothing was her reply, as I asked her to drive it to the shop.
I looked it over seeing the tie rod had folded, the right spindle was cocked and closer inspection showed it to be cracked at the weld.
I removed the tie rod and right spindle, repair welded the spindle, straightened the tie rod, reassembled and called her out to finish mowing.
I think I will show her this picture as she is now teaching her daughter to drive.
B

I have spare Tie Rod Ends, wheel bearings, and the like, as well. It is always nice to be able to get back into the seat without a long delay, waiting for parts.

I wonder how many other Cubers keep a supply of spare parts they hope they will never use, just in case they might need them. Sometimes I think I have way too many parts.

I replaced both tie rod ends on my 100 last week in preparation to use the cultivator w/my new tri ribs on the front. The PO had them installed upside down and one was really bad, that's why it was upside down!) and actually fell apart when I removed it

I found the old ends were about 3/8" longer than the new ones resulting in only about 3 threads engaged on each end, not good IMHO, after adjusting the toe-in.

Anyone have a source for the older style longer ones or do I need to modify and lengthen the rod?
N

My supply of "parts" is 3-4 non running parts tractors taking up space in my shop...

) question.
Since my "9" is down for a while I'm using the 782 in it's place. I was mowing the other day and it seemed to run out of gas, but it had at least a 1/4 tank. I let it sit for a few hours and it started up and ran fine. I was basically done so I put it on the trailer.
I then mowed a little bit with it the other day and it acted up again like it was running out of gas.

. I put it in the garage and took the side panels off to check the fuel line and filter. I started it up again and let it run for a few minutes at a little more than idle and snapped this pic.
My question is shouldn't the filter be full of fuel? Could the fuel pump be bad? Will it run better with a full tank?
I'm mowing again tonight with a full tank, but am bringing 73 just in case it dies again.
I have a spare fuel pump and a spare coil, but I'm just not sure of it yet.
Thanks! 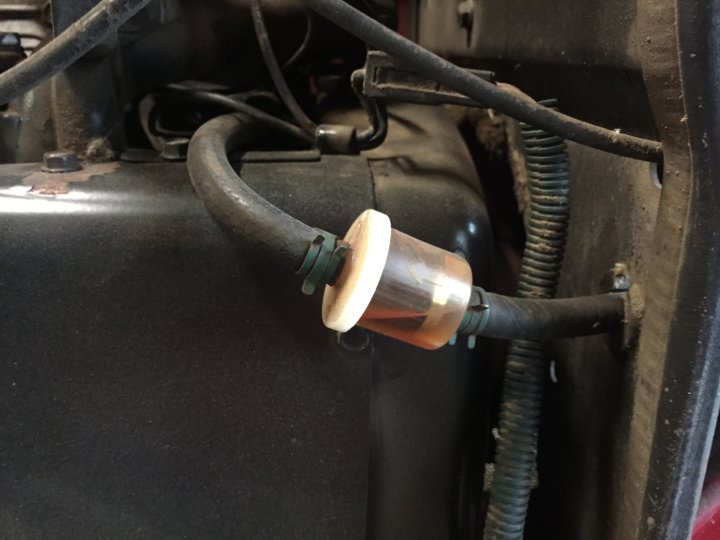 Well Mr. Shultz, the real question is...is your filter half full or half empty?

What does it look like at WOT? Fuel vapor can fill up in the space in the filters, but usually diminishes somewhat when the engine is running.

The full tank (runs) to 1/4 tank (doesn't) sounds like it is a gravity feed system at this point, which could be the fuel pump.

I don't have a clue about your fuel issue, sorry; but I am watching, with a great deal of interest, any thread that has to do with a 782.

My 782 has a metal fuel filter in about the same place as shown in Shultzie's photo. I think it is an automotive-type filter. It needs to be replaced with something more appropriate to the tractor. Would it be better to mount the fuel filter behind the firewall, next to the fuel tank shut-off valve?

That sounds like textbook fuel pump failure to me. If you happen to have a fuel pump tester you can connect up to it, disconnect the line between the pump and filter at the filter, and attach it to the tester. Crank the engine over; it should pump up to and hold about 3-4 psi. If the needle flops around, the pump is shot.

If cost of OEM parts is an issue, I've had decent luck with the aftermarket replacement pump from Tulsa Engine Warehouse. The last one I bought was $35 or so. I would replace the filter and fuel lines while you are in there.

If the engine is hot enough to melt a plastic fuel filter in that location, it is probably already on fire. The filter is probably no less heat-resistant than the fuel lines. There really isn't enough room on the tank side of the firewall for anything but the smallest of fuel filters.

Common for fuel filter to be 1/2 full on Mags, most of mine are that way.

Sounds like a fuel pump issue, or plugged screen in the shutoff valve under the tank....some had filter screens on them.

If it runs fine on a full tank, but bad on a partial, fuel pump.

Be cautious of a full tank, bad fuel pump will drain it all into the crank case......check oil often until fixed.

Shultzie: I would second what Matt and Steve have posted, but add that this would be an excellent time to consider installing an electric fuel pump. Sponsor Kirk Engines sells a unit designed for small engines, even though I've been using an automotive unit (7 gpm) for years without incident (I "inherited" the pump configuration). The advantage of the electric pump is that you turn the key and wait a few seconds and you KNOW fuel bowl is full when you crank the engine; with a mechanical pump, you must crank the engine to top-off the fuel bowl --plus an electric pump won't flood your crankcase with fuel while you're sleeping . . ..

Edit: If in doubt about the pump, install a cut-off valve in the line from the tank to the fuel filter --and use it-- when the tractor is not in use. I used a B&S cut-off valve on my 782 effectively until I got the engine with the electric fuel pump.

On another topic: Contemplating and engine swap from a 122 to a 125; are there any issues of which I should be aware?

One model difference, same frame, different drive trains, how difficult can it be?

Thanks guys for the great input and ideas.
It ran last night with no issues for about 2 hours and then it started popping and choking. It had just less than a half tank of gas by then. I stopped it and started mowing with the 73 for the rest of the night. When done it started right up and ran fine to put it back on the trailer.

I think I will put a shut-off valve on for now just to be safe. But I think something is up, but I'm not sure.
When I first got the 782 it was running hot and I found a mouse nest in the shroud. Before I found the nest, it got hot and started popping and choking and one of you guys said it might be a valve sticking.
I guess I'll figure it out someday. (with your help of course)
Thanks!
Share:
Facebook Twitter Reddit Pinterest Tumblr WhatsApp Email Share Link