Here are some photos from Marlin of the Prototype Hydrostatic Original: 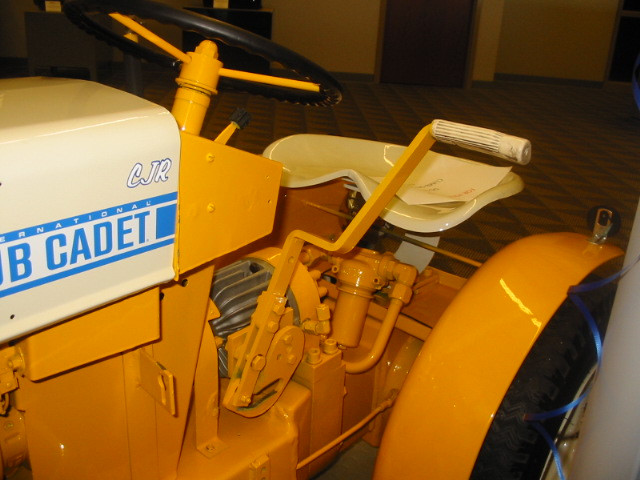 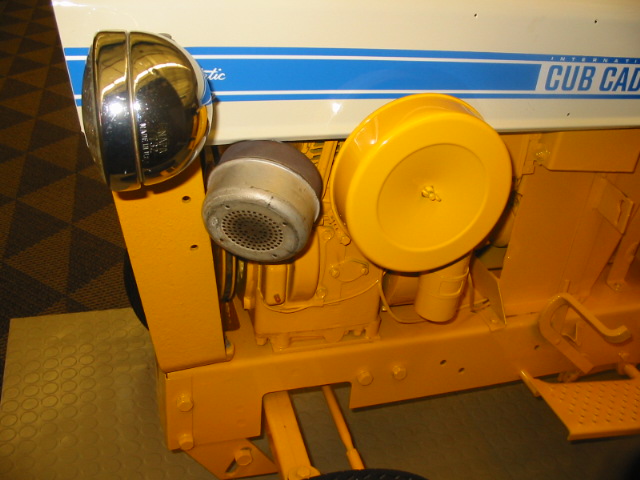 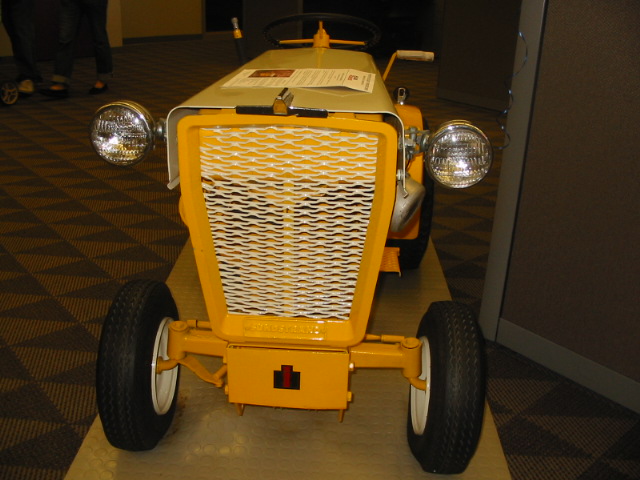 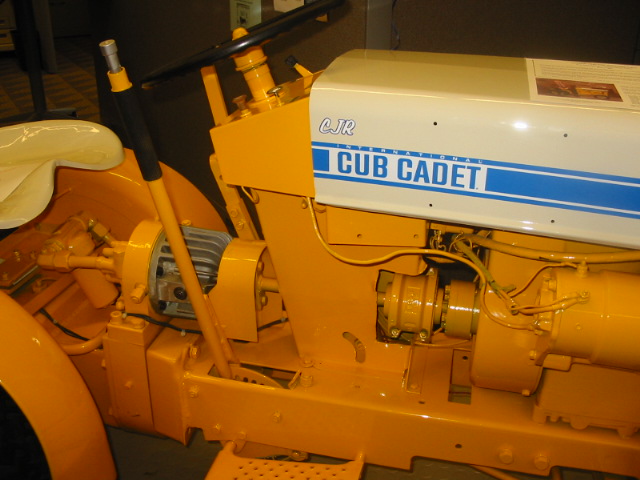 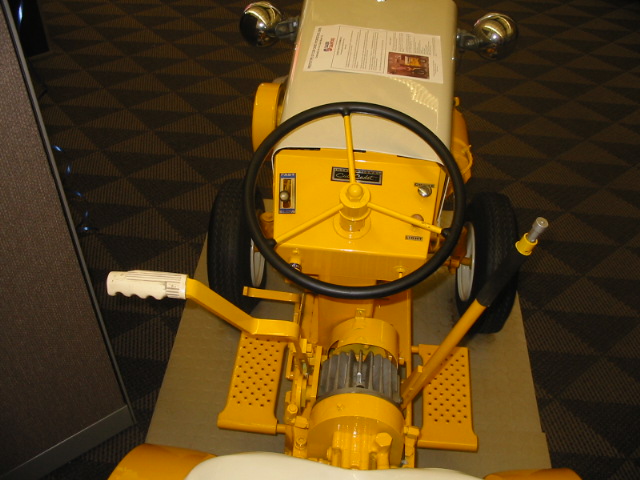 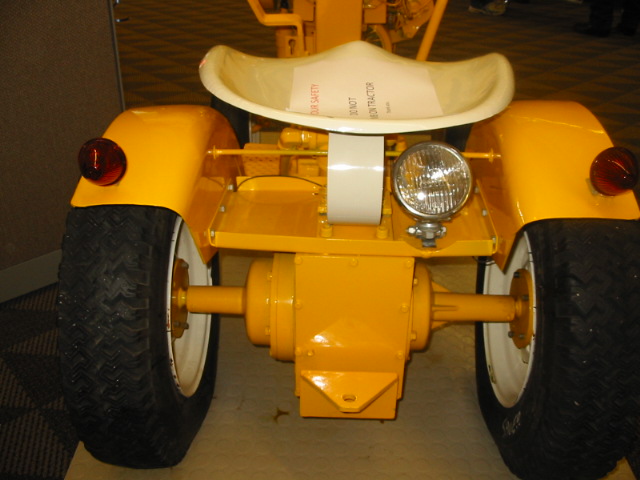 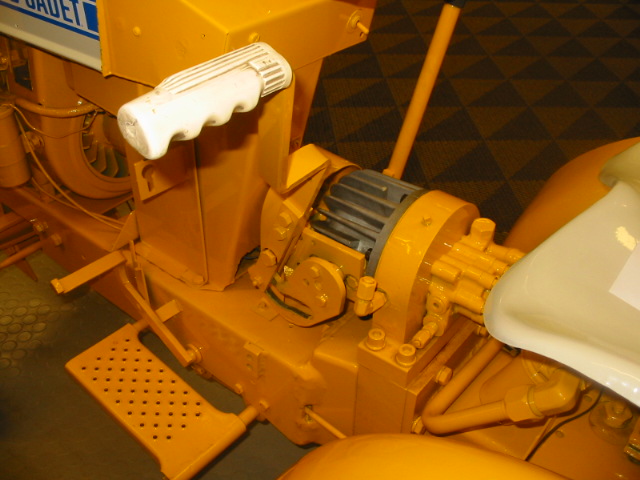 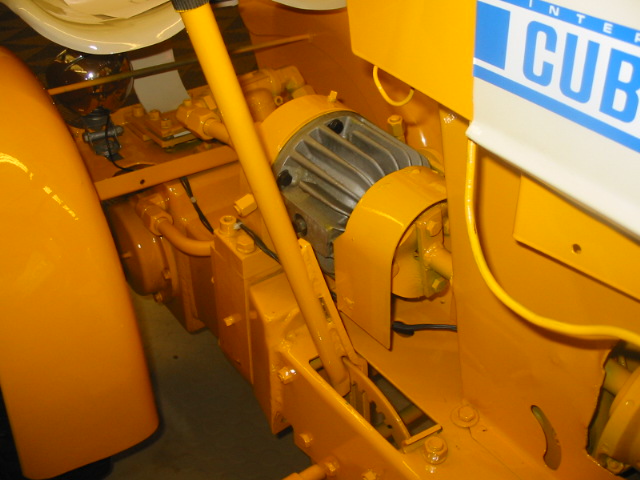 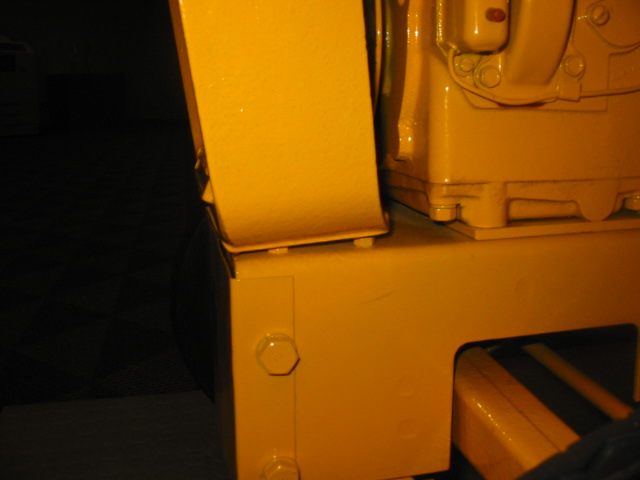 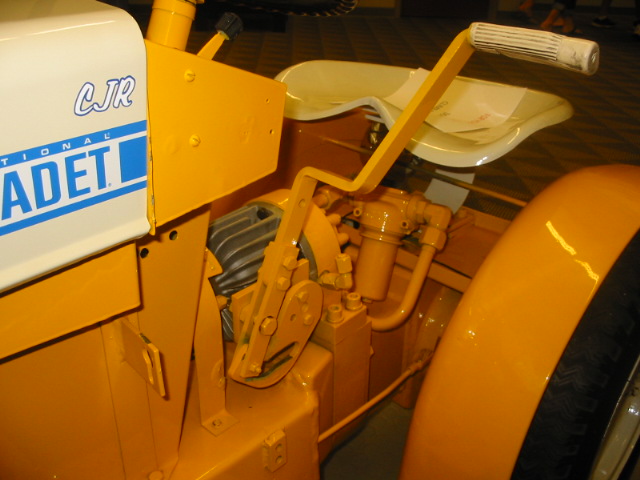 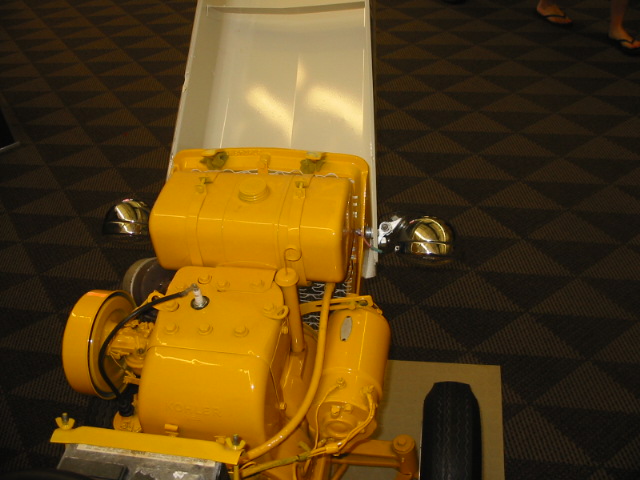 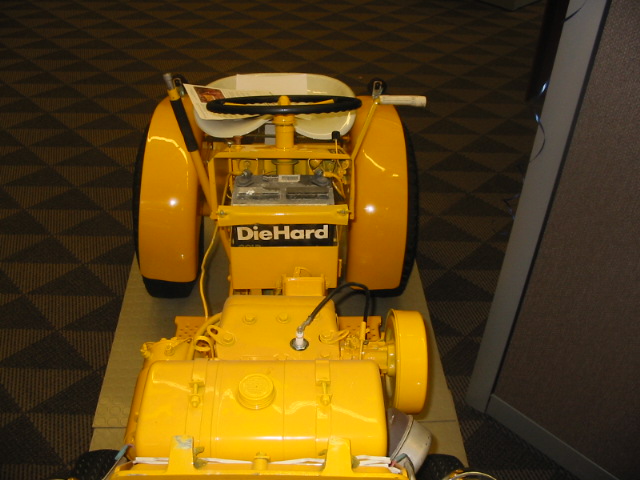 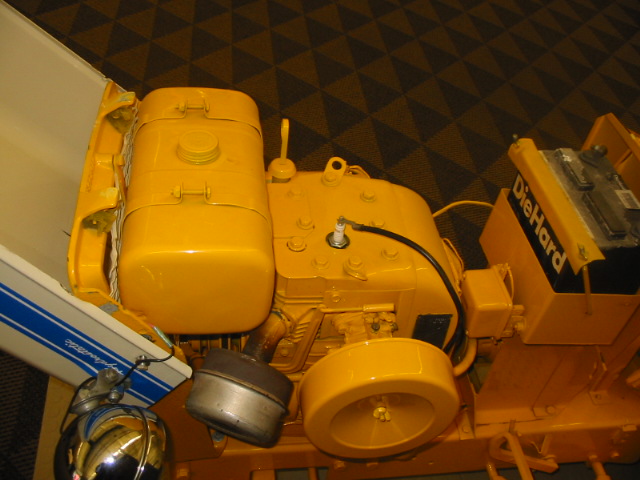 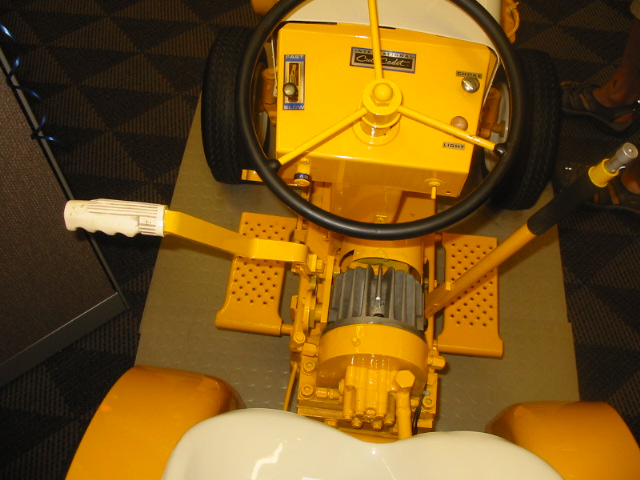 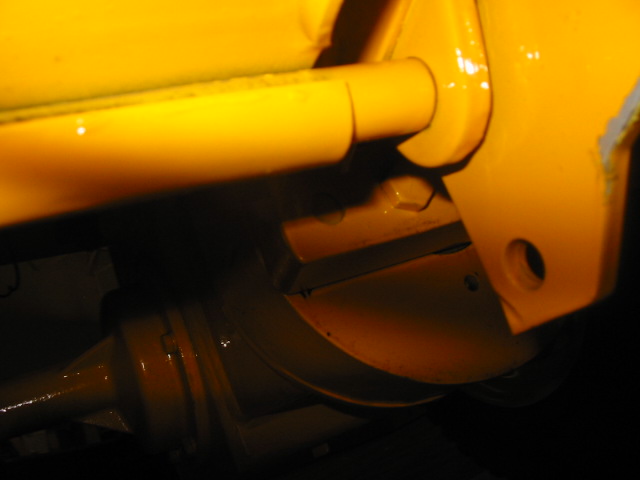 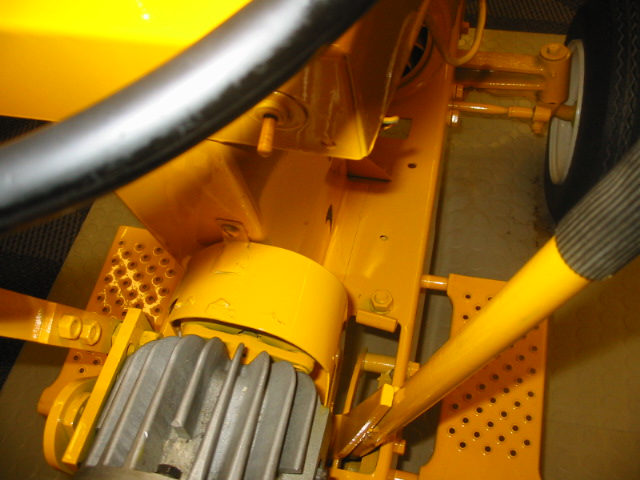 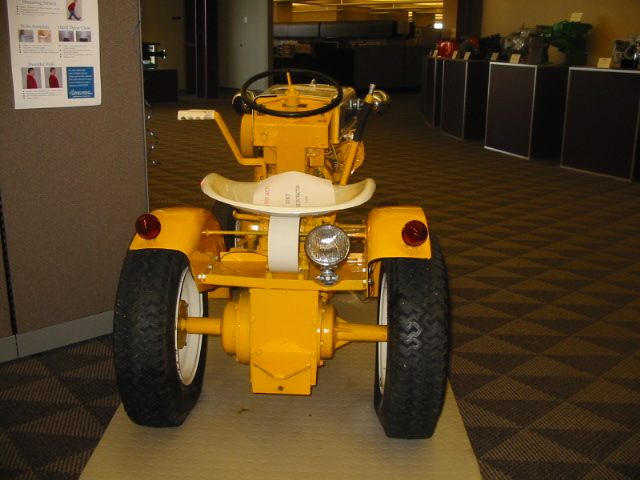 KRAIG !
I'm GLAD you posted those !
I've always wanted more of that beauty !!

Marlin - What's the drive between the hydro and the transaxle ? Chain or gears ?
D

MARLIN, KRAIG - Thanks for posting the pic's. They must not have filled the rearend with oil/HyTran, it's "not marking it's territory"

HI, Everyone!!! A BIG THANK YOU to Kraig for posting these. Angel did her best to try and get them sized correctly and then send them to Kraig. (She's the BEST!!!)

Dennis F. Look on the floor on the left side. That is Hy Tran. (The little light brown spot.) The tractor still has the battery that was in it the day it was delivered to the company after refurbishing and updating the paint and decals. The tractor once unloaded from the pickup was literally driven to the elevator and through the office area to the elevator and then to its first spot in the original basement museum area.

Next picture from the bottom shows how they moved the dash pedestal to the left so the steering column wouldn't interfere with the driveshaft. The CJR is to honor Charlie J. Ricketts (his project).

KENtuckyKEN. If I recall correctly the rearend is all gear. Since the only parts usable were the axles and housings, rims/tires, brake, the way Mr. Ricketts explained it to me is this. He was a hydraulics/hydrostatic propulsion engineer. He had to take a "quick study" course in mechanical gearing and final drives to design the rear drive. I recently met a gentleman that remembers ordering the gears for the tractor so they were custom made for the tractor.

Look closely at the frame in the 8th from the bottom picture in the area just below the hydro. You will see where they literally welded that piece to the frame.

This gets interesting with the engine. If you notice the paper on the top of the hood is copyrighted with information provided to the person about the specs of the hydro. This person states on the paper that the engine is a Kohler 7 hp engine.... Okay.... I'll leave it up to everyone here to tell me what engine it is. (Remember how I stated there were TWO Cub Cadets with two different types of hydros and the other Cub Cadet kept the original 7 hp engine. This one was updated to the 10 hp Kohler because IH was introducing a ten horse Cub Cadet.) This is the paper that must be available when the tractor is put on display away from the company. You can see how they shimmed the grille to accomadate the bigger engine and the plate for the engine mount.

Another retired engineer told me that poor little tractor was really beat up from the rigorous testing and numerous wheelies they did with it. Mr. Ricketts had to literally rebend the front spindles.

The pictures were taken during the company's 40th anniversary celebration last month. to get the underneath picture I ilterally laid down on the floor in front of a lot of people to take that picture. Although I didn't do it that day, I have placed myself in the "driver's seat" very gently and careful to not scratch anything. Talk about a WOW!!! feeling sitting on a neat part of IH history.
K

Anybody notice the grip on the hydro lever is backwards ?
That pedestal bolt in pic #10 looks bad too where they had to put it and the pedestal looks kinda ragged towards the engine in that pic.

Marlin - I thought I saw your butt print in the seat , may just be my monitor needs cleaned ...

KENtuckyKEN. You're correct about the ragged looking parts. I've been informed that most prototypes aren't the prettiest looking things during the building and then testing phases. This is due to sometmes making an easier access for adjustments or quicker removal, etc.

Did you notice the rectangular design of the rearend? And when you think of it, what appears to be the close proximity of the gas tank to the muffler?
K

Marlin - Yepper I noticed the rear and I went and got a <strike>box</strike> bucket of baking soda when I first seen the gas tank location ... don't want to burn my new monitor !

Hey send me the FULL SIZE pics so I can see your finger prints on the hood !

I like that little feller , he's got a good industrial look about him !

And yes I noticed the headlights turned down too , bugged me until I seen they were up in other pics.
W

That is a sweet looking little tractor. I wonder how hot it was mowing in the summer with that heater between your legs. I can't see signs of a fan; it looks like a coupler in the little shroud in front of the pump. I also noticed the hood spaced up off of the grill but understand now that Marlin explained things.

Hey Marlin...is that a Sunstrand prototype as well? Thanks for all of the pics.

KENtuckyKEN. For some danged reason Angel has trouble getting the full size pictures to come up as such. I'll have her keep trying only right now things are a litle hectic around here. One of the things is that we're finally looking at replacing the Dakota. It truly is nickle and diming us each month. We don't need another payment only we're putting $100 or more in the critter each month since January.

Wayne S. Offhand I can't remember much about the pump other than the charge pump is from a fuel oil furnace. And I am pretty sure there is a fan to cool the hydro. Actually with all the open space around the system since it isn't under the tractor it probably wasn't too bad to operate. In the winter during snow removal that extra heat would be a plus.

Picture #8 from the bottom you'll notice the snowthrower chute crank holder is still on.

Marlin I am pretty sure thats the 10 hp engine since it does not have an oil bath air cleaner, I believe only the 7hp had the oil bath.

Jeff, Kohler had a 10hp that used the oil bath air filter. It was never used on a factory Cub Cadet but there is at least one 10hp Original that has one... Art's Plow Special. I do agree that it's a 10hp installed in the prototype in the photos however.

Kraig any pictures of it?

Jeff, here's a LINK to some photos of the 10hp oil bath air filter compared to the 7hp and one shot of Art's Plow Special. Click on the link and scroll way down to the bottom of the page. Here's a little more info on Art's Plow Special; click on THIS LINK and scroll down.

Found this, I looks to be the same one but, a few things are different. You can see the holes for the factory headlights on it and it looks like it has the international at the bottom of the grill, but it doesn't look as hacked up where the drive shaft comes through the tower.

Did they make more than one of these? 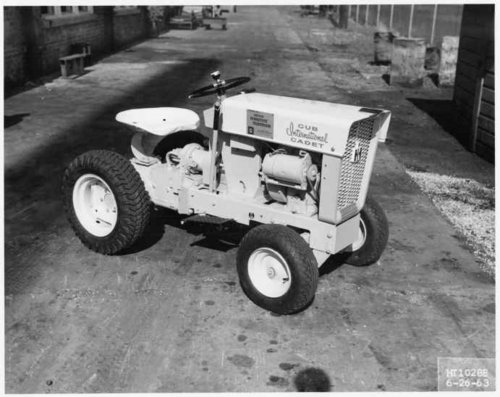 Lucas J. Excellent picture. Where on earth did you find that? Yes, that does appear to be the same tractor. Maybe the hacked (cut away) on the dash pedestal came later during development/testing. And ... yes there were TWO prototype hydros. The other tractor KEPT the seven horse power Kohler and had a different style of hydro unit in it. THAT style of hydro was used in the first Wheelhorse Hydro tractors tht beat IH's Cub Cadet hydro to market by less than six months. John Deere also used that style in their first hydro garden tractors.

Again... Good find on the picture!!

Also, ... for those in the Rockford, Illinois area. That second Cub Cadet Original prototype hydro may still be around yet. The two Cub Cadets were bought by company engineers after all testing was done and the IH contracts were signed. Now THAT would be a great find.
K

Marlin - You sure that's the same one ? That pump looks smaller to me and the fan guard on it makes it look more like the old car horns with the bell on the end. The pump it's self looks shorter front to back.

It appears that the Original in the B&W photo that Lucas posted has a 7hp, note the drain plug at the base of the engine block.

I thought I got the image at HERE but I could not find it.

KENtuckyKEN and Kraig... Good eyes!!! My left knee is literally hurting big time. Time for another visit to the doctor. THAT could then be the <u>other</u> prototype Cub Cadet with the different style of hydro pump. If so then that is the only picture that I would know of for that tractor.

Lucas J. Please try and find it again. I need to leave for work and when I get home... well ... I am too pooped to do much. Read the information they have about it.

I finally finished my Highly modified 122 Loader With lots of help from my son at his fab shop. She works pretty well!