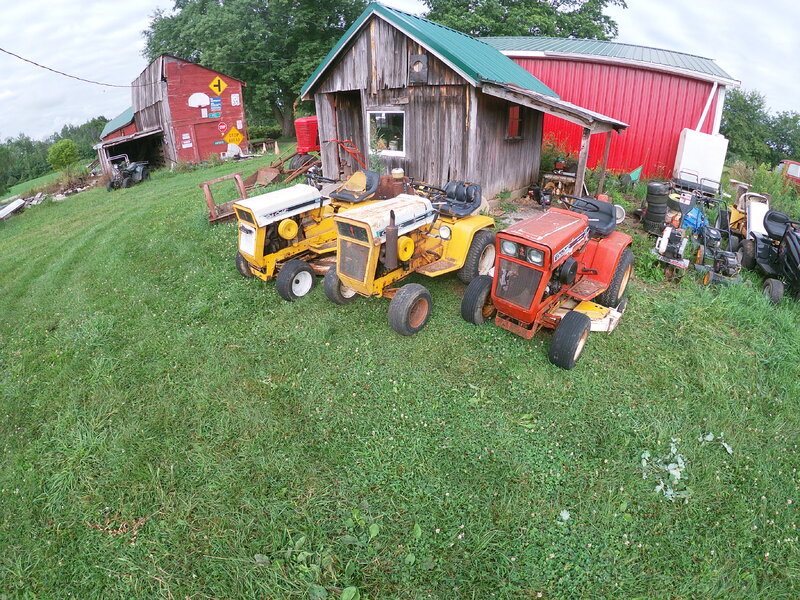 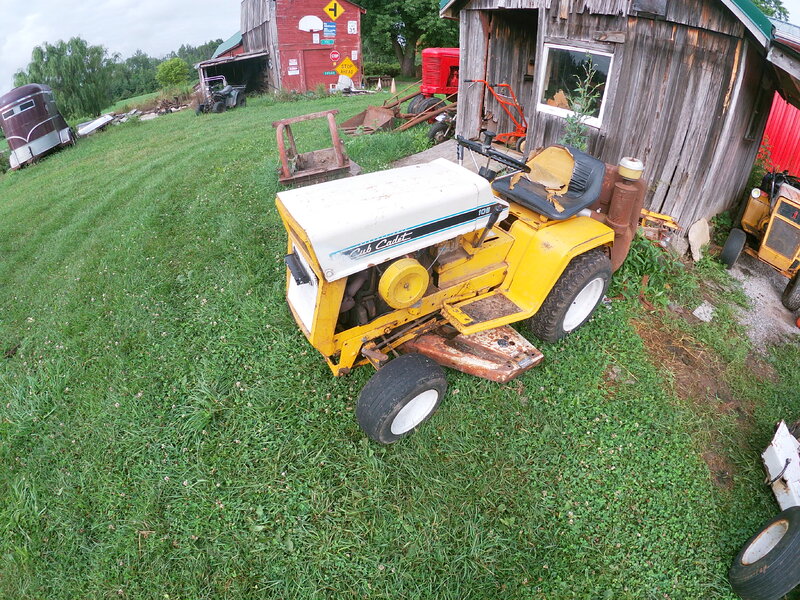 1971 106: Bought this one last June, been a very reliable worker ever since. 38" mower deck, I do a lot of mowing with this tractor. Runs and drives really well, clutch is a bit noisy but really strong. LED light bar on the grille, mounted it there so I could avoid drilling any holes anywhere on the tractor. 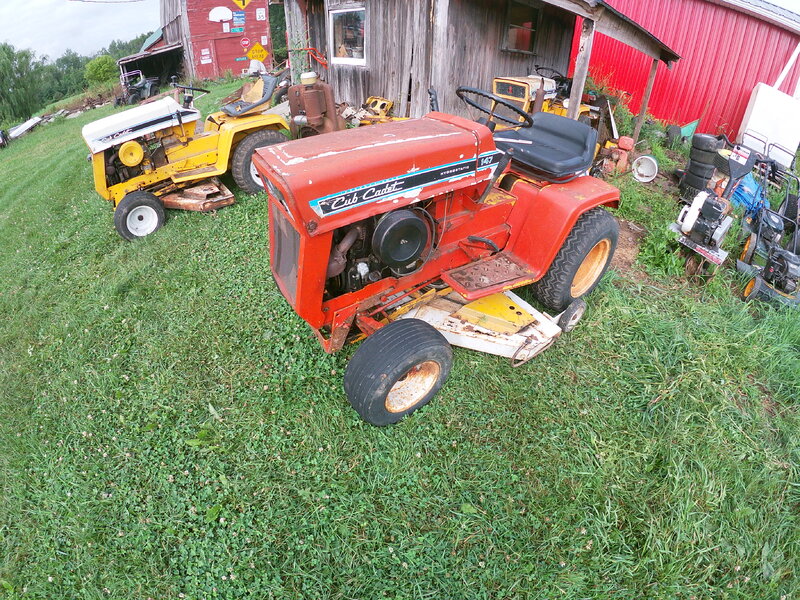 1970 147R: got this one for free July of last year. Sat in a swamp for about 15 years. PO (one of my neighbors) had it painted red about 25 years ago, the paint will stay as is because it has grown on me. Went through the engine over the winter, did a balance gear delete (before the engine could delete them for me). Got it running about a month ago. Just swapped the electric lift rockshaft for a manual one and mounted a 42" deck, have yet to test it though. Original starter generator needs a rebuild, will have to do that soon. 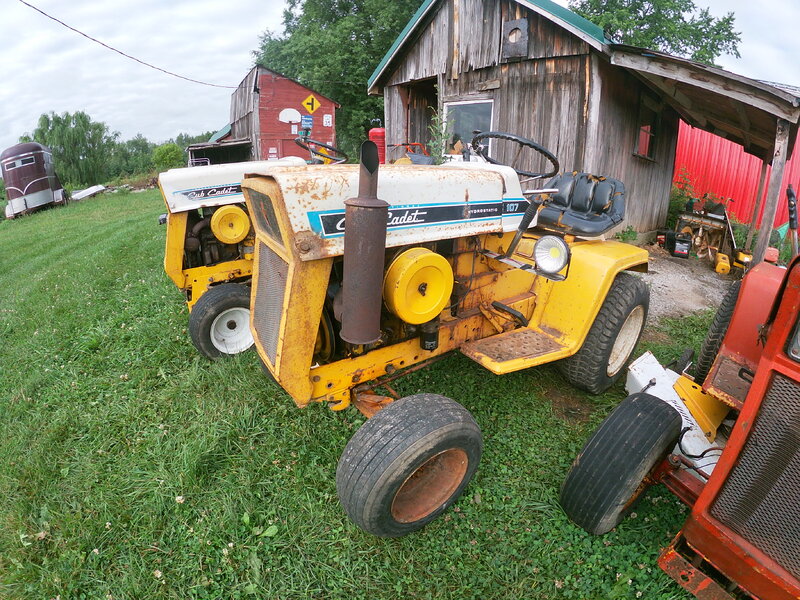 1970 107: this tractor is my favorite of the bunch. It was my first one, first project, and most difficult project to date. I bought it 4 years ago for $80, only for the good engine. She sat out in the weeds, in pieces, for 30 years. At some point someone towed it and busted the original hydro unit. My neighbor (not the neighbor who gave me the 147) bought it as a parts tractor for his other 107. The whole thing wouldve been scrapped, but I made the decision that I was not going to let that happen. 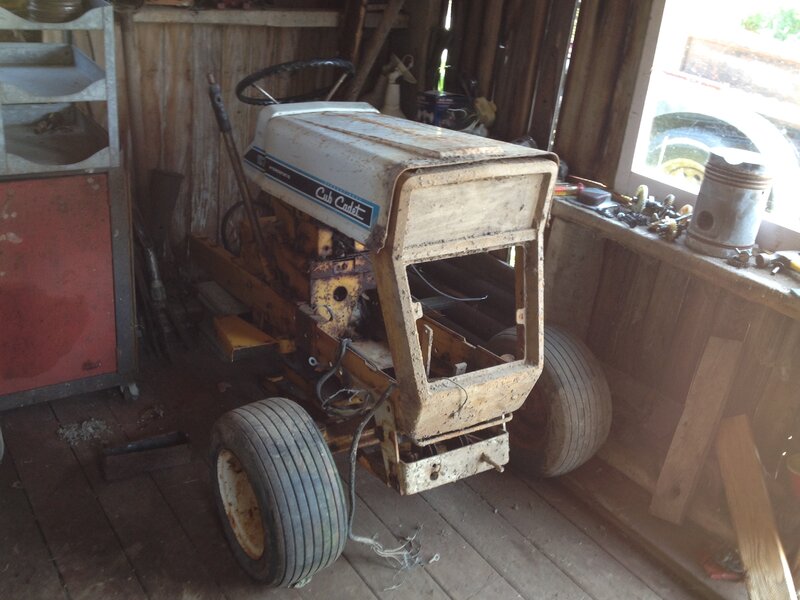 The day I brought it home it looked like this. Obviously she has been through a pretty major transformation. Fortunately the engine, fenders, and seat were inside an old storage trailer and still in decent shape. The rear tires still held air, the fronts did not. Wiring was complete junk, and the hydro controls were stuck. The frame actually sat up on its nose, with the grille casting in the ground. 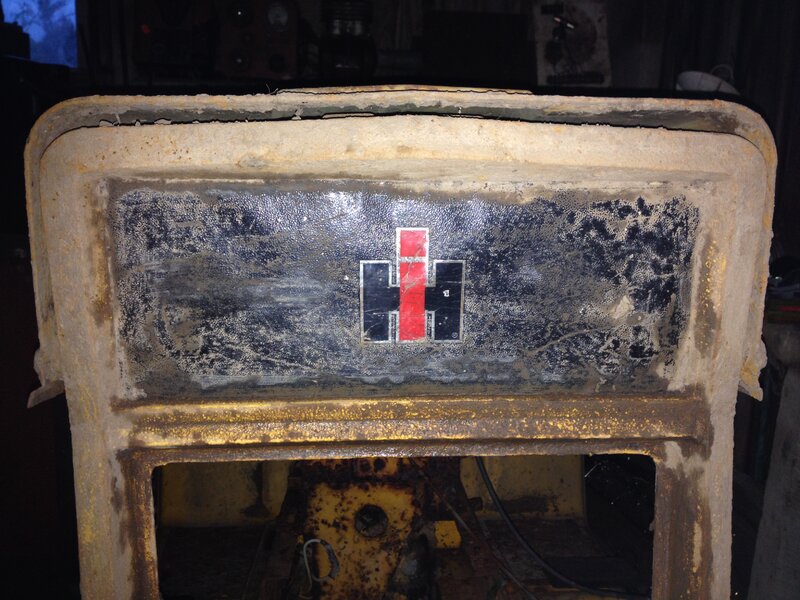 Underneath all that mud was the original textured headlight panel decal, still in decent shape. I have left it on the tractor. I replaced the busted hydro with a unit from a 105. The engine it came with was from my neighbors other 107. I ran it until early this year when I discovered that the previous rebuild done on it was of poor quality (the kind of quality where they forget to install the sleeve that they said they would install). So I pulled the k241 and have swapped it with a k301. The vertical muffler was on the k241 when I bought it, and I like it, so the tractor still uses the setup. I added twin round LED lights without drilling any holes, I simply cut and bent a piece of aluminum sheet to fit in a pre-existing slot beneath the battery box. I then mounted the lights to the aluminum. The light switch is a factory push-pull type. Tires and seat are original. 3 tires have tubes in them. Seat is cracked but kept dry, so I will continue to use it. 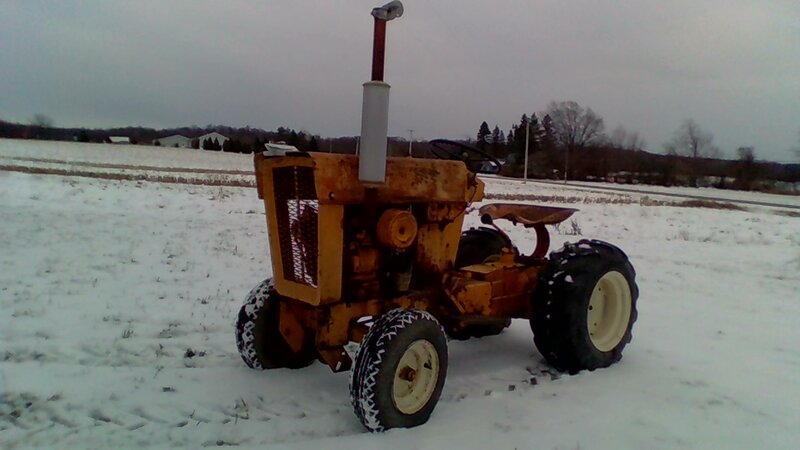 1961 Original: I bought this tractor in October last year. Another cosmetically left alone machine. Haven't done much with it, haven't even pulled it out in a while. Just not much use for it. I more bought it because it's an Original and I wanted one. It needs a new drive belt, a carb clean and tuning, and some major work to The governor linkage and it would be more usable. But it does run and drive. Has wide ag tires and a tall stack, mods made by the previous owners when they rebuilt it mechanically.
G

Thanks guys, Gary, I know it doesn't seem like it but with all 4 Cubs running, I'm starting to run low on projects! Gonna have to dig into some smaller stuff that I've been saving for instances like this. I do however need to make sure I get the 107 all buttoned up for the county fair this year, gonna be on display all week!
E

Do I see a Farmal F or H with a straight arm scoop peaking it's nose around the corner of the shed.

eholmes said:
Do I see a Farmal F or H with a straight arm scoop peaking it's nose around the corner of the shed.
Click to expand...

I grew up on the seats of pair MD's with converted wide front ends. On a dairy farm in Schoharie county NY. Also had a Super C with 8ft sickle bar mower and a 460 on the farm.