I've read about "bad paint" from the factory but these are the first photos I've seen. It seems hard to believe.. but there it is. Wow.
B

I had every intention on rebuilding the "heirloom" 102 I used to mow lawns with when I was a teen. Then, I picked up an old 129 as a possible project, or for spares for my 102, not really knowing what a 129 was at the time. The 129 was pretty much a wreck when I got it, but with a good deal of patience, and some luck finding a usable engine block, I got her running and have been tinkering with it ever since, and plan to tinker with it some more soon (adding a hydraulic lift). I run the crap out of it blowing snow, and cutting 2 1/2 to 3 acres of grass every week.

Then I found out my neighbor had a 125 when they stopped by while I was building up the motor for my 129. They told me they were having trouble getting it running, so we towed it over my place and after a couple of hours of work redoing the carburetor and swapping a few ignition parts to troubleshoot it, I had it running better than I ever remember the old 102 running. I probably could have talked them out of the 125 for half of what I ended up putting in the 129, but by then I was already in pretty deep, but still only maybe a third of what a Huskee/Craftsman/Murray would cost.

Well, I found another 102 on Craigslist last summer, thinking I might have a parts tractor to help fix my 102 heirloom, but this parts tractor looks to be a better restoration candidate than mine, so I'm restoring it instead. Everything's pretty much done but the paint and reassembly.

And so it goes, you'll always find a better deal out there somewhere, usually right after you decide to pony up for something else. Its a constant learning curve that's part of what makes it fun!
R

And so it goes, you'll always find a better deal out there somewhere, usually right after you decide to pony up for something else. Its a constant learning curve that's part of what makes it fun!

Ya mean like finding an engine with carb, S/G, coil,pto to replace your worn out engine and glad to have it only to find an entire tractor the next week for the same money with the same engine?

Yup, I'll probably find a 1650 in a couple of weeks that only needs a carb rebuild and a new head gasket to run like new again for what I paid for the piece of junk in the back of my truck now. Fat chance, but it could happen if the little old lady that owns it decides that it is junk and just wants to get rid of it, and you happen to pounce on it before anyone else. Most people who make it a hobby or occupation fixing up or breaking up old tractors for their parts tend to know what they're worth, and will price them accordingly, the really good deals are few and far between, the mediocre ones keep getting relisted.

Until a deal like that falls into my lap, the only thing I can do is to evaluate a potential project or parts tractor by deciding if there's enough there of what you need to make it worth the asking price.

Richard, and there is no doubt that it is factory runs in that paint, as my parents bought this CC 125 new in 1969.

I recall years ago someone on this forum was refurbishing their Cub and found a tire sidewall imprint in the paint on the transmission and were curious as to how it could have got there. (I'll try to find the photo of the imprint) Then someone posted this old photo which explains it. <FONT COLOR="ff0000">I</FONT><FONT COLOR="000000">H</FONT> didn't even wait for the paint to fully dry before they packed them up. 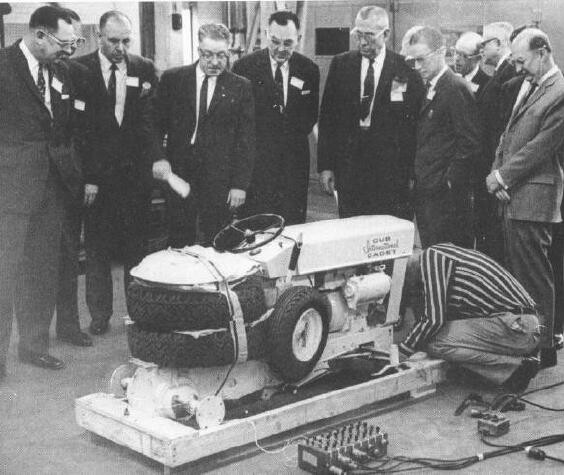 I see it this way, a couple of the cubs I have were free so they helped make up for the ones I paid too much for.
R

In all fairness to the bottom line I got a really good deal on a 100 that I'm fast falling in love with. When I first made this post I was all jazzed up about getting the used engine I just got into the 129 only to discover while cleaning it up that the front axle bushing was falling out and the drive train was shot. But I really, really like my new 100. And hopefully will be picking up another this weekend. It's not in as good of shape, but it's a 100.
R

I guess when you got the bug enough really never is. I'm not angry or upset with the 129. It's a machine. What gets me is what the PO said about this tractor and led me to believe. And I know that when I pop off on this first tractor of mine all I really want to do is pop the PO with something deserving what a liar needs. He did not stretch the truth. He did a Mark Twain. I love my new hobby and I am glad there are others, you, like me.
L

I came close to enough is enough yesterday. I mowed my lawn with the 108 (gear drive) and it took ne almost twice as long as it does with the 169. It runs and drives and mows good but around trees and close places i want my 169. As long as i own a hydro. i won't mow with a gear drive again. Gear drives are good but not for me to mow with. 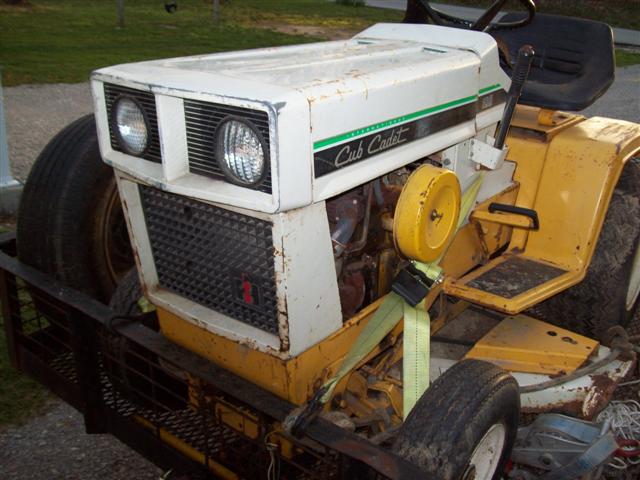 Luther Ray Hinds,
To quote Ghandi, "There is more to life than increasing it's speed."
L

Richard; Very true but slowing down around obstacles and turning around is what i like. I guess i have been spoiled by the hydros for the last 30 years. Nothing wrong with a gear drive.
S

I have found that while I'm far from done with my 104 project, it has been quite nice to work on when my job,wife, kid, or whatever has my stress level up to a boiling point. Yes, I want to be done with it but as life, work and money dictate how much I can do I know that when its done I will have a good machine. I have a 106 that I have had for 16 years now and it makes my nieghbors tractors seem like cheap junk. All the work you can do to make these tractors "right" and usable far out wiegh the aggravation they can initially cause you. I say stick with it and it will pay HUGE dividends when all is said and done. It may drive my wife nuts but at least its not a hundred "bad" things I could be doing and she agrees with that point!

I have about 80 trees & bushes in my yard also so trimming and turning takes a great deal of time.

getting stuck: sub/compact tractor or UTV?