Things that Kill my Cub time.

Hi, David. I am currently living in an apartment in Ames. Both knees having been replaced now. ( I have some cool pictures from both surgeries.) My left knee was replaced January 4 in Baraboo, Wisconsin. I stayed with my Sweetheart in Madison during recuperating. She wants me to move there when I retire in January from Danfoss. It's pretty countryside around there and I think that it would be close to where Dennis Frisk lives.
We are currently working mandatory six days a week. However August does seem like I can make it to Albert City. The mandatory overtime is a huge factor in my retiring. I enjoy working but not six days a week anymore.
Take care and hope to see you in August.

Howdy. This is what I have been able to find out so far. The 90 is the company I.D. Model number. The next set of numbers designate the application. So Kraig M.'s 90-1006 will give the specifics such as shaft and other specs. or ported/non-ported.

Really looking forward to getting back to some Cub projects. Love my Farmall H but the Cubs are so much more portable. 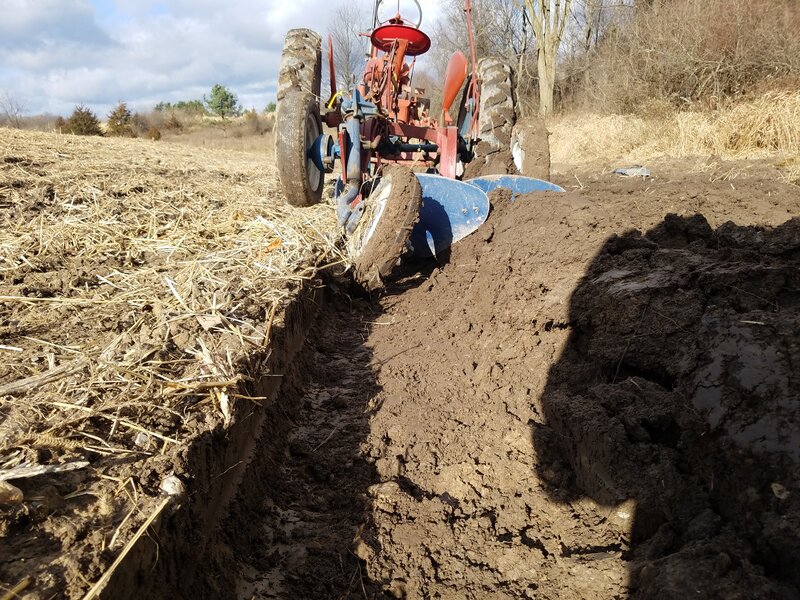 Good evening, All. I said that when allowed that I would announce what I think is some good news. A company called QUALITY CONTROJ CORPORATION LLC of Chicago, Illinois has purchased the entire 15 Series and M25 Series from Danfoss Power Solutions. They are a great company and will continue to make the 15 and M25 product lines. So parts for both series will still be available. Sunsource and Behrensens will carry the parts/products. Sooo.... that means that if you can't get parts from your dealer then simply contact Sunsource or Behrensens.

It's About Time • QCC LLC (qccorp.com)

That IS good news - thanks Marlin!

Well, it's off to the annual MoPars on The Mississippi car show in Dubuque this morning with the 300-F
Hopefully there will be a few others from the northern IL region besides myself and another member from Cedar Rapids with a 300-J so we won't find ourselves amid a sea of late model "Kiddie Kars".
Film at eleven! 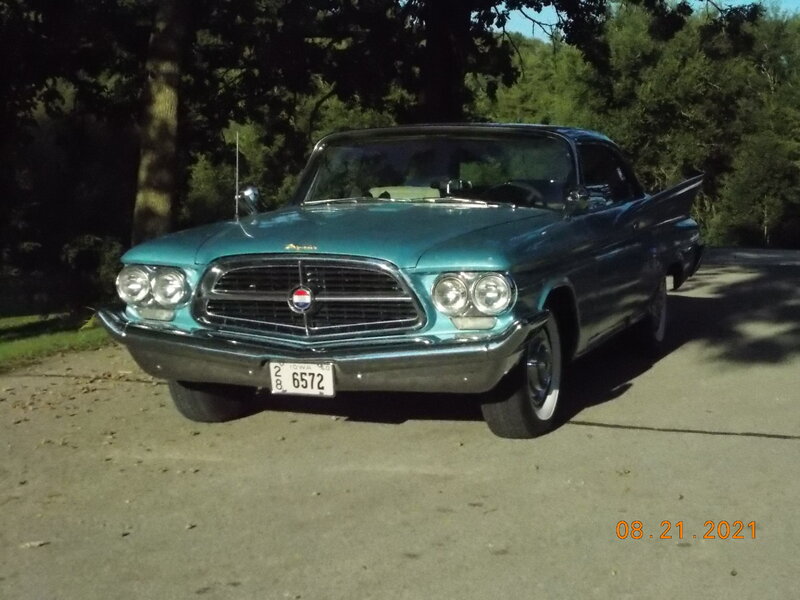 dschwandt said:
Well, it's off to the annual MoPars on The Mississippi car show in Dubuque this morning with the 300-F
Hopefully there will be a few others from the northern IL region besides myself and another member from Cedar Rapids with a 300-J so we won't find ourselves amid a sea of late model "Kiddie Kars".
Film at eleven!

HI, Dave. That's a sweet looking car!!! I'm looking at moving to the Dubuque area early next year. It will put me just across the river from Diana. Not quite ready to leave Iowa for Wisconsin quite yet. It's hard to get any PTO due to labor shortage. So it's still mandatory overtime.

glippert said:
That IS good news - thanks Marlin!
Click to expand...

Good morning, Greg. If I recall correctly Danfoss Power Solutions tried to retire the 15 and M25 Series in 2014 however there were a couple of customers that had strong enough orders to keep them going. QCC is a fantastic company. From what I've heard they will begin production in Chicago at their facilities in October. I wish that I had a place and time to still work on Cub Cadets and my Pow'r Pup. Perhaps someday. For now I hope that word will spread that parts and units will still be available for many years to come.

As promised, a few pictures from the car show today.
I won't bore you w/pic's of row after row of Kiddie Cars.
There had to be well over 200, looked like a late model used car lot, well 2 car lots really.
One for the late 2015 and up models and one for the 70's through the 2000'
Pretty boring actually IMHO, but then I getting old!!

We were on the far end of the field in the grass which was nice considering the rest were on the hot blacktop.
In order, 47 Dodge truck farm produce outfit, still in the original family!
57 (I believe) DeSoto, fresh resto, guy had just bought it and did not know much about it.
The older yet stuff, nice cars too BTW
59 Dodge
And my favorite,
55 Dodge 2 door coupe, a real sweetheart.
There could not have been, next to mine, more than 6 or 8 cars there w/fins.
Many of which were in a modified class and appeared to have been totally screwed over in one way or another.
Oh well, to each his own.
BTW, the F brought home 1st place in class but is an empty win as the 300 J next to me was a much nicer car and there were only 3 cars in the class, disappointing.

I am curious as to your "interpretation of a "Kiddie Car"?

Yes, his is a fresh restoration and mine was done back in '85 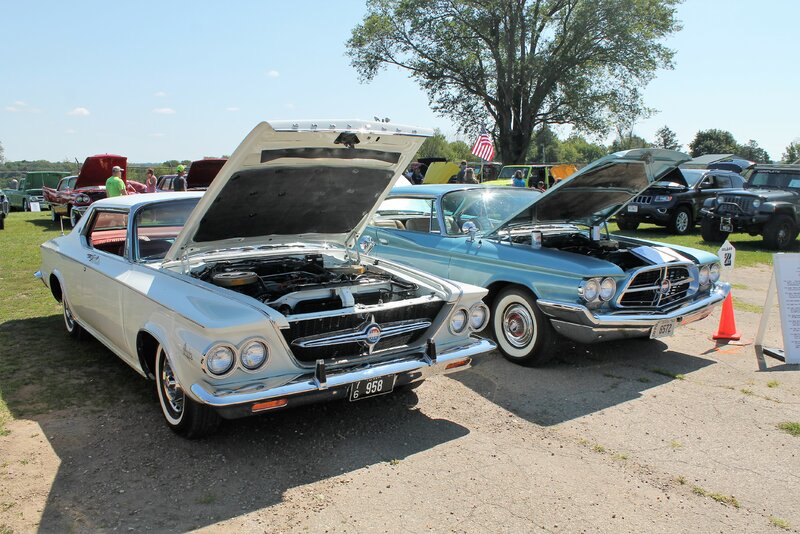 mfrade said:
I am curious as to your "interpretation of a "Kiddie Car"?
Click to expand...

So called "restored" cars that are not, and have been screwed with from one end to the other.
Or late model so called "muscle cars" that anyone with deep pockets can go down the street and buy and bring to a car show.
There were 2 long rows of those (late model stuff) there yesterday and most times I looked that way there were very few folks looking at them.

NEXT.......need to get the Cubs back out of storage and back into fighting shape. The 122 is in need of a full engine rebuild. It still starts and runs strong but the oil fog smell is getting bad. I know it has a bad scratch down one side of the cylinder. Most likely in need of boring out and new internals. The wife's 782 runs well but I know I didn't make the right choices the last time it was apart. Going to rectify that and not reuse pistons as it was on the cheap to get it going.

Also going to closely investigate the valve guides as it seems to be getting a lot of oil in the breather assembly. Nothing left for the H besides plowing, parade duty and maybe paint up a few sets of wheel weights for field work. Really miss plow days with the Cubs.....Great times! 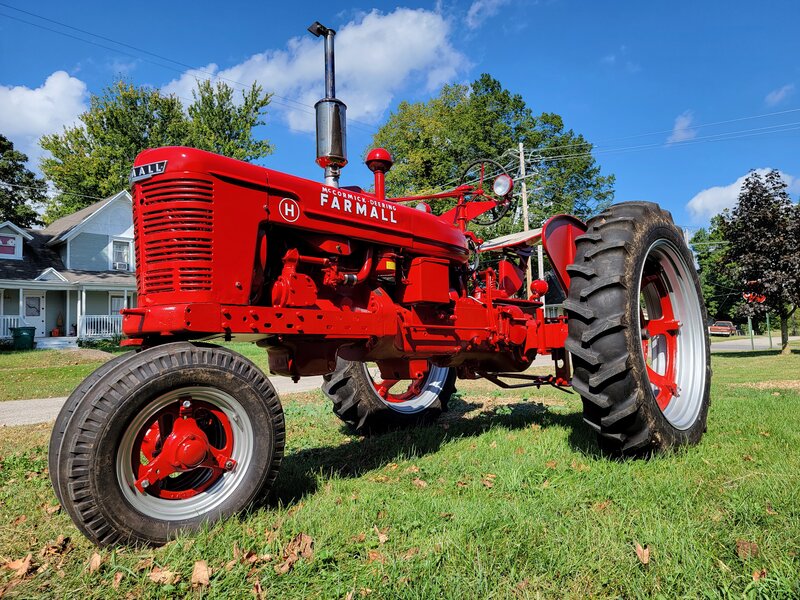 Brian, that is awesome! And another great photo.

Brian, awesome job...there is a lot more "old iron" out there waiting to be rescued...I'm positive your parents are proud if the effort...
M