I thought I was picking up a 1999 Grand Prix yesterday. It has a bad trans and engine, but a new front bumper, hood, headlights, radiator, good tires, and a bunch of other things I could use on my other 4 GPs. I had preivously met wih this guy and looked at this car last week.
On Monday I told him I'd be right over to get this car, he said he works until 2am so we agreed on Noon on Tuesday.

I wish I could copy my Iphone text to this. Here's my conversation to the guy yesterday - with his wonderful lack of spelling and inability to talk normal..

I check and the car is unlocked I open the door, its not beat up inside, I open the hood, all looks nice under the hood - just like I had seen last week.

I literatlly laughing now, I should be mad but this is rather dumb and funny - but it gets better.

He can text and type much faster than I can...

I'm literally laughing at his stupidity, just too funny. He's a 20 some year old who last week was wearing boxers and shorts, no shoes or shirt - and I saw more boxers than shorts. I kinda felt bad for him, he's got a kid in diapers, a girlfriend, wife or whoever, just living the good life...or struggling paycheck to paycheck. I probably would have given him 300 if he just would have come out. So I drive away and stop a mile down the road to text him again, just because its funny.

So I think this is now over... but no last night at 7:48pm he texts me - You work across the st from where I work (he must have been on his smoke break out at the edge of the curb like all the others, and my guess is he saw my F-350 and car dolly on his way to work)
me - where do you work
him - He tells me the name of the place
me - I should talk to my good buddy (the owner-I'm leaving his name out) about this lack of this car deal...
him - what do you mean
me - you know the lack of you being honest with me
him - I work nights and there is no (the owner) here I don't know him
me - well find out who owns that place or check so see whose name is on your paycheck

I'm headed to the junkyard Saturday to get a few parts... Maybe I'll have better luck there.

Funny story! A similar thing happened to me too with an old dirt bike. Man that rattles me after driving over 2 hours.

Of coarse I walked away from it too and glad I did.
A

Where is Ron Whites picture of 'You Can't Fix STUPID' 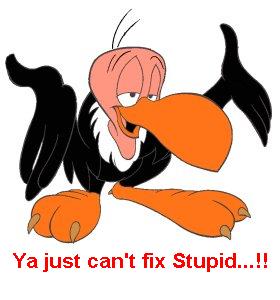 Almost reminds me of the guy I bought my 149 from. The guy lived maybe a half hour from my house, off of the main highway, couldnt miss the 149, 1650, 128 and a few other hardware store tractors parked within striking distance of the road. My mother had returned from grocery shopping that afternoon and said to me "Glen, I think I found a tractor for you, its not far lets go look and see." She knew pretty much what the tractor looked like because my uncle had about six 149's at the time, and I wanted one after spending hours of seat time on his with the sickle bar mower in particular. So we piled in the truck and went to go look at it. I was surprised when I saw the 1650 there, it had the dual hydros, sleeve hitch and wheel weights, but the guy was asking close to 1500 for it, and I only had about 550 on me, worked an entire summer to get that too. So I gave the 149 a good onceover; decent paint, lights worked, decent tires, deck wasnt in bad shape, no sleeve hitch, missing the grip on the hydro lift lever, etc. Walked up and knocked on the door. "Hello, my name is Glen, Im interested in the Cub Cadet 149 down at the end of the hill there, mind if I test drive it." He looked confused and said "You mean the 1650? I dont remember there being a 149 there." I pointed to it, it was clearly visible, second from the left in the array of five tractors. "You must be talking about the 1650 son, I sold my last 149 a month ago." I said "Look sir, its right there, second from the left." He got his boots and walked down with me. "I swore I sold this last month, guess not. Ummm, nine hundred." I laughed and said "Ive got 500 cash and a truck, right here, right now." It needed belts, oil, hydro fluid at least added, and the ignition switch was bad so you couldve started it with a screwdriver. "Ummm, five seems a little low son, you really oughtta check out this 1650, its got almost everything replaced on it." It was in worse shape than the 149 and 128 were. to me the only thing I really liked was the dual hydros. Anyway we went back and fourth and I eventually had to come back in a couple days hoping hed remember I had asked to have it held and he agreed, and after working my butt off I came up with another hundred. Amazingly he handed me the key when my father and I pulled up. Bought it, took it home, and mom looked astonished that I had gotten it. Ill never forget what she told me "See Glen, dealing with idiots can almost be fun. If nothing else, next time someone calls you stupid in school, just think of that guy." and thats the story of how I got my cub.

Just out and about on the internet, found this
K

LOL!
#1 Don't look down
#2 Don't sneeze
#3 He'll ruin his eyes reading that close
#4 Hard hats must be expensive there
#5 His wife told him he was thick skinned
#6 Don't mess up the do bro
#7 No termites allowed on job site
#8 I hate people that turn their hat sideways
#9 I'd hide my ugly face too
#10 Hope nobody sees a mouse
#11 Any shade is a resting place / must be highway dept

Good stuff guys! Dave, I'm a framing contractor and we get to deal with OSHA occasionally! That is a classic

This is Hilarious !
G

She broke the toilet by sitting on it! thats fantastic!

This guy should have bought $1 matches when he was spending $40 to buy his supplies.
I did this in the living room years ago ... not advisable indoors !
K

This may win the prize

I am nit sure what to say, or think. I hate to say it but in my opinion, it is the PARENTS fault. They one, should have been supervising a child that young in general, especially if lawn equipment was being used. Also, even at 3 the kid should have been taught to STAY THE H**L AWAY FROM THE TRACTOR!

If it was the tractor in the picture, it is a 50 year old tractor. It was never equipped with a reverse cut out. We were taught back then there are things in the world that can hurt or kill you.

I have taught my kids from day one, just like I was, to STAY AWAY when the tractor is not sitting shut down in the garage....

Sorry for the somewhat rant.... but it is not the tractors fault.
A

Didn't know where else to post this...
An engineer(?) found a solution to a non-problem. I suppose this is something neat but, WHY???