Refurb and Modification of 1430 Lawn Tractor

I was thinking about hooking it up with a cigarette lighter, or a stereo jack from a pair of headphones. I don't have any of those things sitting around the house, though, and I wanted to do it on the cheap. So far this tractor has cost me about $1000 since last year. The well is starting to run dry.
M

I used a mud flap from a big semi to modify the blower. If you look this up online, it actually makes a hug difference. Throws farther and doesn't clog as often. I believe the improvement is most dramatic with single stage blowers. 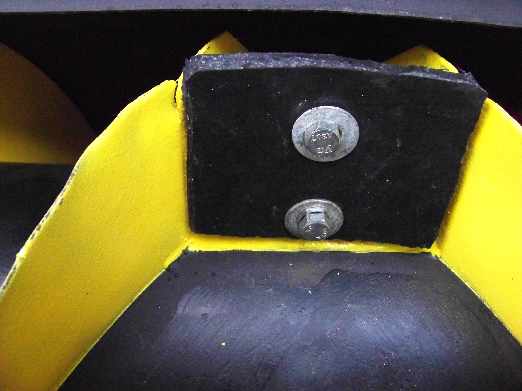 Mark, I have to be honest,, $1000 is way to much for 1430 lawn tractor. Here in ILL you could set your self up with a real garden tractor and snow thrower for about half that.

this set up (minus the rear tiller) cost me about $600 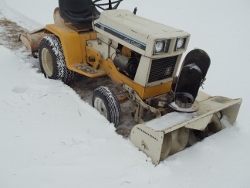 I spent $200 for the mower. Then $200 for the mag20, then $250 for the blower with weights and chains. Another $40 for the steering column and $30 for the steering wheel. Then add about $100-$150 in miscellaneous hardware and materials. I pieced all of these things in as the money accumulated. I'm perfectly happy with the 1430, it was a very fun project and a good opportunity for me to learn a great deal. I have another mower to cut the grass which works great. Really, this was to keep me busy and blow off some stress.

I've searched setups like yours here in NY. They are few and far between, and generally marked up pretty high. The tractor alone would cost around $500-$600, then the blower would likely come as a second purchase, or possibly and extra cost on top.

Why do I hear Johnny Cash singing in the background all the time????

For this year, I am thinking that the project is finished. In the future, I may bastardize a hydro from a bigger tractor onto it, and build a backhoe. I imagine the blower will act as a splendid counterweight.

Mark--"Original" is the first word that comes to mind! I just finished combining a 1020 hydro rear to a 1225 frame for a buddy of mine. The little five speed pearless took a complete dump and so I found the little 1020 hydro for cheap! Saying that, while working on that little dude, I couldn't imagine putting an MV20 on it and building a blowing machine. We are used to modifying and building the GT Cubs but I think that you built a cool little machine. Keep this thread alive by posting updates as you start working it hard. I'm interested to see how the rear end holds up to the power and torque of the big magnum. I do like the paint scheme. The blacked out version makes me think of the Case Demonstrator tractors of the early 70's. Good luck and congrats on thinking outside the box!!!
M

Thanks Josh! Yes, I agree with you that the little hydro on the 1430 is a glaring weak point. I am not sure how it will hold up. If need be, I will just replace it with something stronger when it decides to die.
M

Charlie, I just figured out your joke.

Yeah, it's got a little bit of everything mixed into it. I am basically married to it because no one in their right mind would want to buy it.
M

Every time I start it after it sits for a few days, it makes a big puff of stinky, oily smoke. Why does it do that after it sits? I am thinking that the rings are worn, and maybe after it shuts off, there is a little oil sitting in the cylinder jug that weeps into the combustion chamber.
M

The steering wheel has been attached. The tractor is basically finished. I am still trying to find a way to cover up the steering column in a nicer way (you will see what I've done with the lid from a pickle jar, and about 2' of duct tape...) 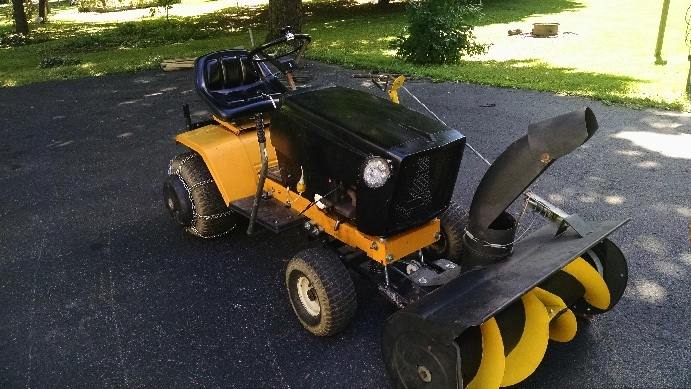 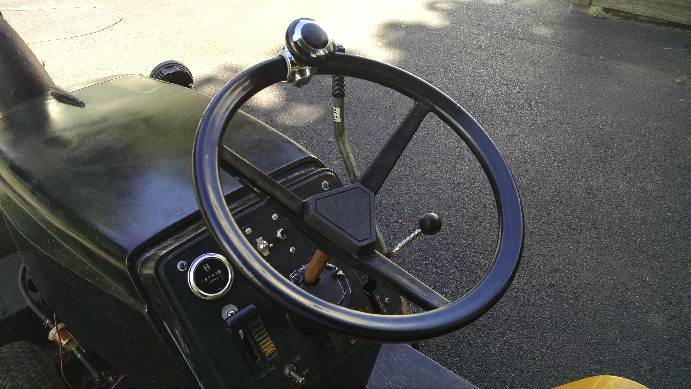 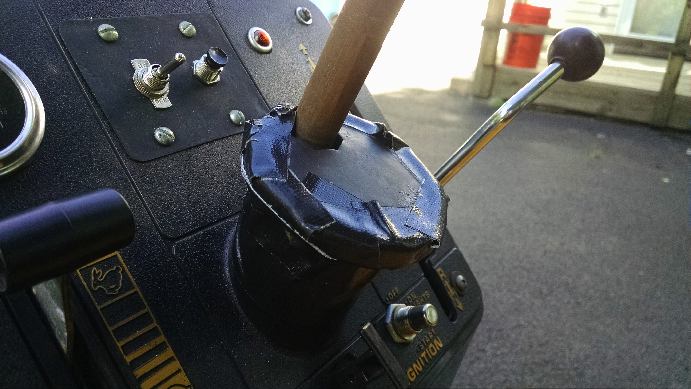 The belt did not want to stay on one of the pulleys, so I fashioned a piece of metal to hold it onto the pulley. It is curved like a dish, and spins freely overtop of a bushing: 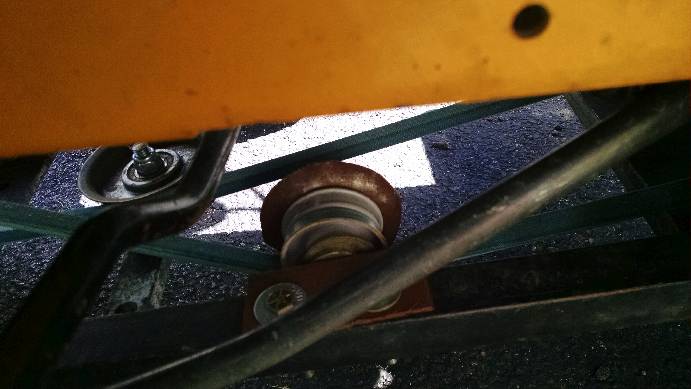 Mark: Your tractor is now unique in all the world, which is neat; the downside is that whenever something is wrong with it you are the only person who can fix it. I hope you get at least one full year's service out of it after all the work you've put into it, perhaps even 2 or 3 years trouble-free.

Regarding your smoking issue, many years ago I owned a 1965 Mercury Comet (same body and drive train as a Ford Mustang). When I idled it in the parking lot, it sounded fine, and did not smoke, but if I left the parking lot after 10-15 minutes of idling, I left behind a large plume of blue smoke. I was told it was the worn valve seals and guides that caused the problem. The oil was pumped up into the head while I was idling, ready to be sucked into the combustion chamber under acceleration. I sold the car with it's Boss 302 power plant before the problem ever got fixed. Not saying it is your problem, simply saying that it is a possible source of your blue cloud of smoke.

It has a strong motor that starts right up. The hydro seems to be in good shape, too. I believe it will work for several years, especially since it will only see 6-12 hours of use every year.

I am eager to get a beefy hydro and rig up a backhoe. That will be next year.

Perhaps before I get involved with a huge project like replacing a transmission and designing/building a backhoe (easily hundreds of hours of labor and well more than $1000 in materials) it would be wise to actually learn how to weld. Fool that I am.

So, to start small, I would like to replace the stock mufflers with a big, quiet muffer from a car or truck. As it is now, I have to wear ear plugs while this one is running. I think one of the exhaust pipes has a split in the seam, I can see heat stains where it is leaking.

I have been trying to calculate the exhaust flow CFM, and will have to match it with something from a car. I imagine something from a little toyota or an old GEO, something that has less than 2 liters... Either that, or a motorcycle exhaust, maybe from an old Honda Nighthawk, like a 500 or 650....

Have any of you guys had luck with such a project? Any ideas where to start? I would run the two exhaust ports into 1 pipe, and then turn it 90 degrees and attach the muffler like a stack similar to the one on Jim's 782. Only instead of being cool like Jim's, it would look..... different.

The muffler will have to be big enough to silence the exhaust, but also to provide roughly the same amount of back pressure as the stock exhaust pipes. It does not strike me as an easy task, as I am not a math guy, more of a hands-on, trial and error type of person.

Mark-
My advice would be to leave the muffler as it is. Unless it has a gapping hole in it, it's doing it's job. This is a garden tractor, it's not rocket-science.

I've worn ear-plugs with all of the garden tractors I've owned. The exhaust systems on these tractors are designed to keep the thumping combustion from pounding your eardrums, not actually making it quiet like a car.

With all of the "non-text-book" modifications you've made to this tractor, I would wait and use it for a season before you start putting anymore time/money into it.
M

I suppose you are right. Anything further would be pointless meddling. It does make more sense to just wait.

From what I've read/seen during today's research (ridiculously slow day at work, but who can say no to free OT?), it doesn't really matter if the exhaust has perfect back pressure. I've seen a bunch of strange stuff that some guys have put on their motors. I guess the real issue would be to run it with no pipes at all; the diameter of the exhaust pipe actually plays the biggest role, not so much for all of the stuff that comes after.


I am not quite sure how I would go about it, either, because the setup for the hood doesn't play well with the exhaust ports. A stove pipe exhaust doesn't seem like it would work too well.
M

Welding is actually much easier than I imagined it to be. Granted, it will be a long while before I am producing tight, clean welds that look like a roll of dimes, but after 4 or 5 hours, I have learned to strike, draw a line, and create a strong, durable weld with the correct depth, and no pockets or defects. I tested this by welding a bunch of random stuff together, then throwing it on the ground 5 or 6 times; nothing broke off, so I guess it's good enough.

I found a muffler for an old Cub at Tractor Supply. It think it will work well enough, the opening should create the same amount of back pressure as the baffles from the dual mufflers. However, getting my hands on some 1-1/8" is proving to be a challenge. There is a shop in town that will supply, but they ran out of that specific size tubing within the past 2 days. I'll just have to wait for a week or two.

Mark, do you have a muffler shop locally? They could probabily bend something for you at a price far cheaper than $80.
M

I think I would rather have the pipe bender in my workshop. It is not a tool that I will use very often, but it is also something that will inevitably have value over the years. Kind of like the tap&die set I begrudgingly purchased to fix one bad thread on my motorcycle; I have used it more than 10 times since then, and even though there is no denying that it sits gathering dust 95% of the time, it is still an essential tool with no replacement or work around. I do not see a tool as a waste of money; a tool is an investment in yourself, your property, and in your valuable trade skills.

Come to think of it, a bender would have been nice while I was re-plumbing the house with 150ft of copper; probably could've saved a lot of hours welding tees and elbows.....


Once the muffler is one there, the mower is finished. Everything else has been accomplished at this time.