When putting PTO in start mode, the mower runs, as soon as we but PTO in run position the mower stops. don't think this next is related but some times engine won't start unless we pull a plug wire and ground it, start on one cylinder and then reconnect plug wire to dead cylinder and it runs fine. all beyond me. suggestions appreciated. ron

Ron, the problems may be related, let's look at it.

If your starter solenoid is not pulling in, there is a problem, in reverse order, with the grounding of the solenoid, with the PTO switch, with the brake switch, or the the key. Check all the terminals, clean the grounds, usual drill.

At the same time, the brown wire to the PTO clutch is also supposed to be seeing the same alternator current from the Normally Open contacts of the Reverse Relay. Notice that the alternator red/white wire splits just before the PTO switch and runs over to terminal 30 of the reverse relay. The same current coming in should leave the relay on the other end of the brown wire at terminal "87" of the Reverse Relay.

When you release the PTO switch from the "Start" position, the alternate path for the current becomes the only path for the current. So both your Normally Open seat switch (the one with the purple and black wires) must be made (show continuity) and the reverse relay must be pulled in.

When you are not in reverse, the reverse switch provides a path to ground for the alternator current not being consumed by the PTO clutch and coming back through the PTO switch on the purple wire at terminal "B." When the transmission is put into reverse, the reverse switch is made, the connection to ground is opened, the "In Reverse" indicator light comes on, and the reverse relay drops out. When the reverse relay drops out, there is no longer any path for the alternator current to get to the PTO clutch, so the clutch drops out and the blades stop turning.

I'm not going to tell you to jump anything out, but sometimes for diagnostic purposes, it is a good idea to make the circuit as simple as possible in order to isolate the failure.

Note: It is always possible the PTO switch is bad, but many switches have been replaced before the owner discovered the problem lay elsewhere. PTO switches aren't cheap.

I also recommend Roland Bedell's excellent portrayals of the various PTO switches used in classic Cub Cadets. You can find his colored drawings in the Wiring Diagrams section off the main forum.

There is also wiring schematics for most all Cub Cadets in the Wiring Diagrams section from whence I pulled the schematic below. They are much more legible than the snap shot I've provided. 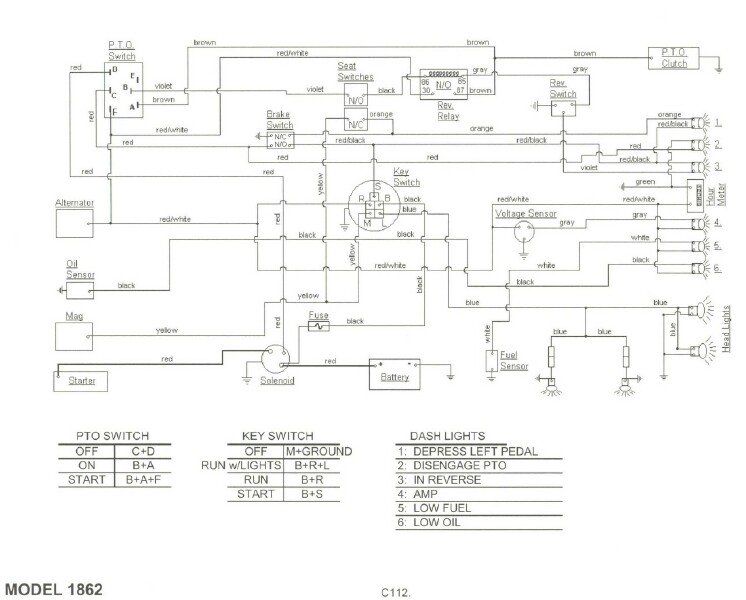 Jchamberlin, all I can say is WOW and thanks for all the suggestions. My son and I will try and follow all your suggestions. Wish I lived next door ! ron

Thanks Ron. If I were there, I would focus first on your PTO issue. I would put the ignition key in the "Run" position and the PTO switch in the "Start" position and check to see that two things happen:

1. The PTO clutch pulls in (as you say it does)
2. The Reverse Relay pulls in while you are sitting on the seat.

If you can get those two things to happen, or figure out why they're not happening, you should be able to mow with the tractor.

As far as your starting issues, beyond the "usual culprits" of poor connections, loose or missing grounds, cut insulation or broken wires, it is a matter of getting your hands on everything and seeing what you find.

Edit: If the PTO clutch is pulling in, I would disconnect it so I could concentrate on the Reverse Relay without pulling the battery down unneccessarily.
V

Tried to say thank you but don't see it. I don't know for sure how to use this site right I guess? ron
V

Will try again Jeremiah. Followed your suggestions as best a dummy like me could. See,s like maybe the reverse relay might not have bee seated right. Seated it and the tractor started right up, PTO ran on start and ran fine on run. Did half the mowing job, took a break and when came baxk ut wiuld crank but not fire. Gounding one plug wire it started right up on the lone cylinder, reconnected 2nd wire and ran fine, shut it off and started right up right. Will check all those other normal problems you suggested. Thanks again, you did enough work for me especially when I see you answering me at 1:30 AM. ron

Sounds like it was just a loose or dirty connection. It happens. Especially when the equipment sits unused for any length of time, like over the winter.

I'll have to think about your re-starting problem. I can't imagine why grounding one wire would help the other one fire. You realize, of course, that the system "wastes" a spark each revolution. Both plugs fire on each power stroke, so that one is firing during the exhaust stroke (up) while the other fires on the power stroke (down) and the next time they trade places; the first cylinder fires on the power stroke (down) while the other fires one the exhaust stroke (up). It is called a "Wasted Spark" ignition system. I discovered it is also used on my 4 cylinder Chevy S-10.

Does it matter which cylinder you ground, or does either one do the trick?

How many hours on the engine, any idea?

I respond at 1:30 AM because that is when I get home after working 2nd Shift an hour from my home.

Never heard of such a thing as a wasted spark. Things have sure gotten complicated since my first car (1937 Ford) in 1948.I always ground the left side plug as sitting on it. I'll try the other side the next time. I'd say rather low hours. One of many mowers we have and sits most of the time. Owned it for many years . thanks again. ron
You must log in or register to reply here.
Share:
Facebook Twitter Reddit Pinterest Tumblr WhatsApp Email Link