Happens to me rather frequently. I’ve two “homes.” When I get my mail forwarded, they are usually a week late. I can understand that, but I don’t understand sending some mail back to the sender saying I’ve left town leaving no forwarding address. They seem to particularly enjoy doing that with credit card bills. I called them once about the problem ( yes, I actually found the number. It took a search warrant, but I got it!) and the employee assured me the postmistress would return my call on Saturday morning. That was two years ago. Still waiting….
D

I can't remember where I found this but it seems relevant here: 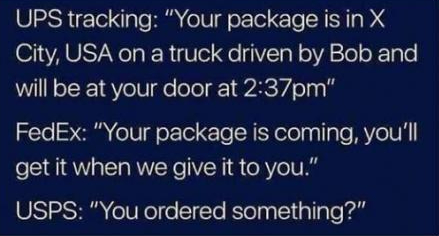 In all seriousness, postal delivery here hasn't been too big a deal, granted our mailbox is out beside the road instead of up a long driveway. Most of our issues lie in whoever delivers the mail. She has a habit of digging trenches in front of people's mailboxes because she locks the wheels up when she brakes! Basically every house on our end of the road has a 4-6" trench dug in front of the mailbox because of her doing this.

My neighbor has it worse though, because he has a dog. For some reason she hates the dog, and in the past has skipped right past his mailbox entirely to avoid the dog. She also skips a few other mailboxes just to be sure, which, of course includes ours. Supposedly she's also dropped his mail in other people's mailboxes to make them give him his mail. On top of all that, they stuck a big paw print sticker on his mailbox to "mark" that he has a dog. Not a single other house on the road has this, despite half of them having dogs!!

They really need to hire a new driver for our route. Occasionally you'll see someone different do the route, who does it without issue and doesn't lock the wheels up braking!

Huh...I wonder if that's why there's always a trench mark in front of my box,that never dawned on me!

My road got ground and repaved a few months back and they came back and put a skirt along the new edge with some loose millings. I'll be darned if there ain't a trench there even through those millings...ha ha!

For 20 years we had a great rural mail carrier. In the last year have had several different carriers. Not sure if they ever found a full time person for this route. I think a couple did not realize what it is like to drive 300 miles a day with 98% on rock roads. Fills the vehicle with dust, eats up tires and brakes with all the stops. One day the carrier will have a white Jeep, next day a silver mini van, then a white Buick sedan, then a Dodge Dakota that takes 40 A to turn around. One day our mail is here at 11 am. Next day it might be 3 pm. If there is no mail for us they may not come by at all since we are on the end of a 1-1/4 mile road. We have just learned to live with it as changing it is next to impossible.

Never ever had an issue at my previous home. In fact the mail woman would drive up the driveway with a package that wouldn't fit in the box. I had a screened in porch she would drop it in. Lived in that house for 30 years. Nothing but happy with the service. This new home, many miles away, is very different. Packages that can fit in the box are brought back to the post office. I get a note that says they are there but in my rural town, the P. O. is only open a few odd hours. Not to mention mailbox flags are constantly breaking off many mailboxes. It's not kids doing pranks, it's got to be this mail guy just puts them down with aggression. Mine broke twice in one year. I think it's time to weld up a beast of a flag.

We can usually tell when our mailman is leaving by the slamming of the box door. Door stop chain has been broken twice by them jerking it open and letting it drop. I have one of the large mail boxes, old heavy steel and they still tear it up.
You must log in or register to reply here.