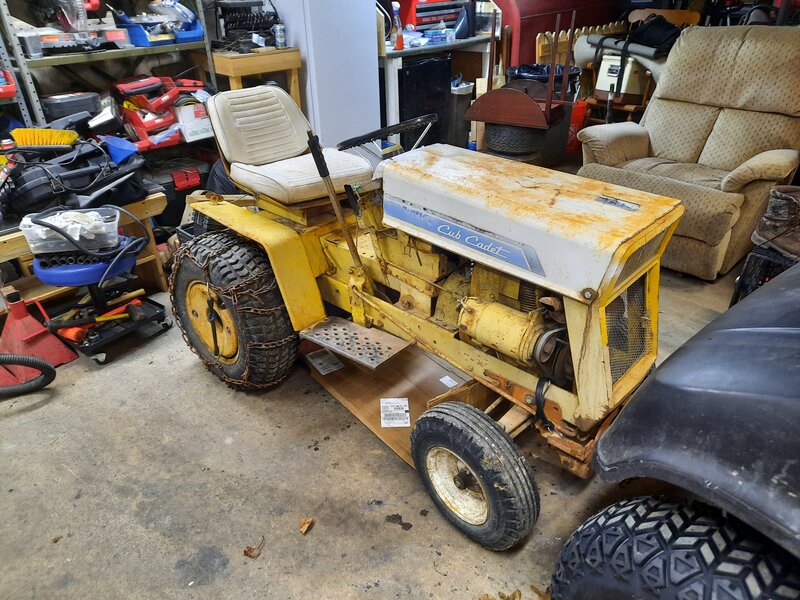 Just bought this and am looking to see if anything can help identify the year and model number. The serial number is #232362 the engine has a plate with model K301A. Looking to do a restoration on it. Any help would be appreciated. Thanks!

I would guess it's a model 125. The hood decal is wrong, it's for a later series Cub Cadet. That serial number is a February 1968 build. 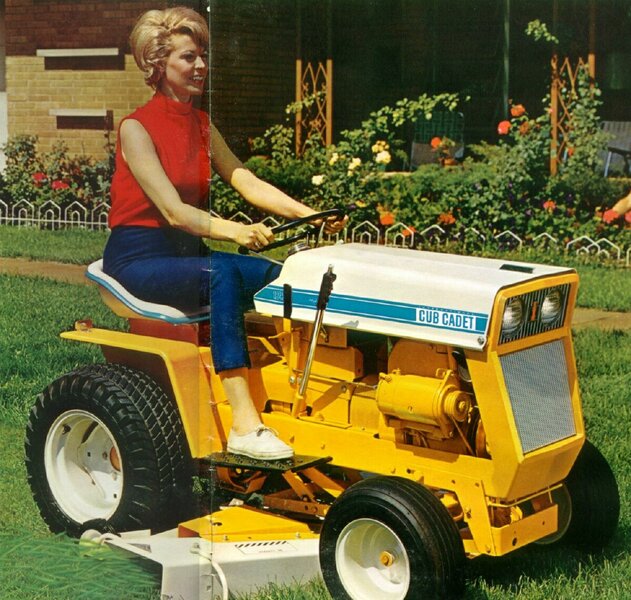 OK thanks for your help! I'm new to all this so amy help is appreciated.

Welcome to the forum. Nice tractor!
When you "fix it up" be sure to take lots of pics so you can see how to reassemble it later.
There have been discussions/disagreements concerning the term "restoration." So to keep it neutral, I just say "I fixed it up."

Come on Kraig - Oh Great One, Keeper of the Photos - you didn't tell Ride TJZ why you were guessing it was a 125, and that the 125 just happens to be your favorite Cub Cadet.

Ride - to help explain Kraig's guess I can add that your tractor has a Kohler K-series cast iron model K-301A engine. That engine was standard in the Cub Cadet Model 125. Also, since there is no manual tranny shift lever and I can see (as Kraig did) the little screw holes (hopefully with screws still in them) in the top of the frame cover in the center of the tractor, and that tells me and Kraig there is a fan housing for a hydrostatic pump for the tranny. Now, Kraig must have looked up your serial number in the build chart to find out it was Feb 1968 and that is when the 125 from the 1x4/5 series was being produced.
So, all in all, Kraig ain't really guessing.

So, where do we (you) go from here. I anxiously opened this thread since it was titled "New tractor". I was hoping someone had found an NOS unit in the back of some dealers stock room, or something like that. When I saw your pic, well I knew you meant "New to Me tractor", and that's ok, but it took the wind out of my sails so to speak. I barely have enough energy left to type this message

Anyway, I see Marty also mentioned about using the term restoration. It riles up some people since many believe to do a restoration you can only use original equipment parts, and a few of those even believe the parts must be from the correct era. So, what it comes down to is maybe you're planning to restore your unit, but most likely you are going to refurbish it, or even just fix it up some.

Now, if you're really gonna restore your unit, the pic posted by Kraig, Oh Great One Keeper of the Photos, shows you what a NEW 125 should look like. You can still buy most mechanical parts, but some cosmetic things are hard to come by. The original fiberglass seat has been NLA for a long long time. You can find used one around, even sometimes in pretty good condition, but that blue piping around it (which you can see in the pic) is really hard to come by. CC Specialties (listed in one of those colorful boxes at the top of the page) is a great source for brand new parts. It's owned by Charlie (Digger) who is one of the Administrators on this Forum. Charlie even has several items reproduced that are NLA from Cub Cadet.

So, welcome to the IHCC Forum. The best place on the net for all your Cub Cadet info and needs. If you have a question, we've got the answer (well someone on here does).

Kraig, its the hairstyle that dates, not the tractor........ but I must say you have the most amaising collection of stuff to brighten up the pages of this wonderful forum ... like the bonnet mounted radio with 8 transistors and 3 diodes......, what next... a coffee/soda/ beer cup holder ... is amaising how trends have changed which reminds me,

I've scoured the FAQ's but have yet to locate a thread that describes "Why and What" led to the changes that went from the 70 --> 100--> 102-->104 design and enhancements. I surmise the 70 -->100 is purely a power thing...7Hp to 10Hp shift, but the 104 has a different grill holder front end ... why, what was the motivation?
The middle and rear ends seem unchanged, but color scheme and front weight/grill holder changed and possibly were brought in to accommodate the quick connect attachment holders...... Care to explain please? ( reason being I have my eye on a barn find that I'm hoping will follow me home soon....)
W

Welcome. Glad you joined in with us.

Gordon, IH was always working on improvements to the Cub Cadet line of garden tractors. Have you read HydroHarry's post on the Series Description?

Gordon,
For Pete's sake, don't worry about the changes. Just go get it!

Once the offer is accepted and the collection arranged we can then start a thread on "Barn finds or bust" or something suitably embracing. With a few pictures of before collection "as found" to entice.......Now its wait-n-see slowly,.... , dont want to spoil RidetJz 's thunder in any way, so big welcome to him !!

Ask not and you wont know, ,...... ask and you get plenty of advice and lots of opinions with help from many very capable and willing CC tractor fans
H

mgwin said:
Gordon,
For Pete's sake, don't worry about the changes. Just go get it!

Hey Marty - I must have missed it, or the Admin's poofed it, cause I didn't see "Pete" post anything

gchunnett said:
Ask not and you wont know, ,...... ask and you get plenty of advice and lots of opinions with help from many very capable and willing CC tractor fans
Click to expand...

Gordon - yup, but we also have lots of lurkers on here and every once in a while one does post something. Usually mentions they've been lurking a year or so, learning alot, but finally have a question.

I can't wait till RideTJZ gets started on his 125. He didn't tell us anything about it, whether it runs or not. I don't see a mowing deck in his pic but it does look like it was a worker tractor with those chains and weights on the tires. I see a bungee cord hanging off the frame near the S/G that seems to be holding the lift rod for a front blade. Can't quite tell what's going on there but suspect something has been modified. Hopefully RideTJZ will tell us more soon.
Last edited: Apr 4, 2021
K

Ken Black said:
guess ill toss this one in here.. just got it yesturday... 125 also... looks like a repower with a MF or WH 301.. its painted all black not after market paint...
not a restore goin to use motor for a 127 and spare parts.. trailer came with it lol ..
Click to expand...

Ken - what makes you think it's not a repower with a Kohler for a Cub Cadet??? I don't think a WH Kohler would work. They are turned sideways from the way a Cub Kohler is mounted and pretty certain the crankshaft output is larger. Not sure about an MF version.

Lots of the Kohler repowers were painted black straight from Kohler (in fact every one I've seen). It used to be kind'a a mystic on here to have a black engine, that there was something about a repower that was better. I happen to like the black paint on the engine. I think it's a better color scheme.
K

hydroharry said:
Ken - what makes you think it's not a repower with a Kohler for a Cub Cadet??? I don't think a WH Kohler would work. They are turned sideways from the way a Cub Kohler is mounted and pretty certain the crankshaft output is larger. Not sure about an MF version.

Lots of the Kohler repowers were painted black straight from Kohler (in fact every one I've seen). It used to be kind'a a mystic on here to have a black engine, that there was something about a repower that was better. I happen to like the black paint on the engine. I think it's a better color scheme.
Click to expand...

harry u could be 100% correct. i have no clue .. still learning what motor went where lol ... it does have the deep pan . it has a normal style dip stick head finger loop on it .. on the cam gear cover. my 127 has a neriled < spelling sucks..i dont recall a fill tube tho on the S/G side.
the air flow plate on top is black also. only thing missing is the flywheel screen.. grrrr lol .. the points cover is just over the frame but the bottom screw is behind the rail lol .. i dont know a thing about 125s. let alone much of anything else lol if the ser number would tell me i would check it out.. but no idea where to look on net ..
iam goin to go take som epix. ill start a new thred so not to highjack this one.. give me 20

Harry,
I don't know who Pete is. It is just a saying I have heard since I was old enough to hear. Kind of like "for crying out loud." I assumed everyone had heard this saying. This saying must have not made it across the Appalachian mountains.

Ken,point cover screw....either factory or previous owner drilled 1/2 hole thru rail directly in line with bottom screw on 128 cover....the top is accessible over the rail...
K

ty . i have seen that done... no what i was saying is.. just seem in a lil diff height to rail.. but i think it was becuse its painted black. the yellow reflects more light..

but ty again for info.
K