Got it cheap, and it was 1/2 hour away. All disassembled, but mostly there. I will be replacing the blown KT17 Series II with a Magnum 18 that I had sitting in my basement. Nice original paint and decals. 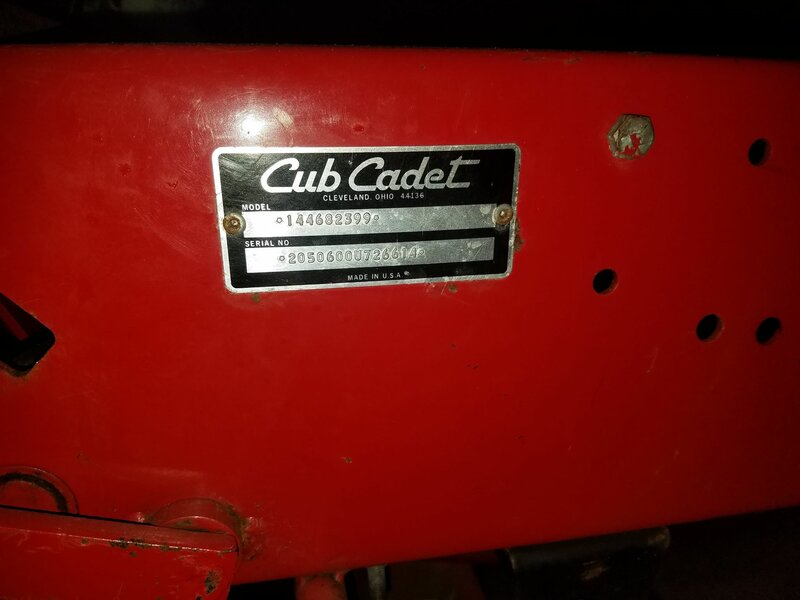 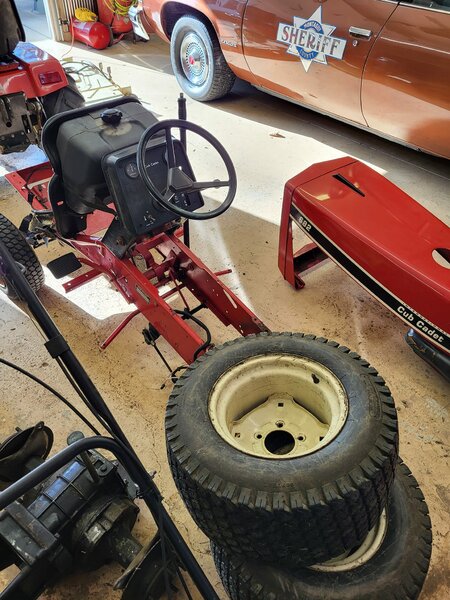 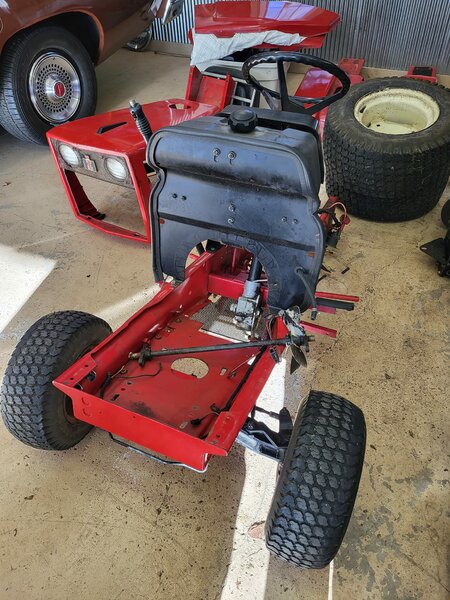 As I was looking at your pics, I was reminded of the headlights I replaced on my 1450. You ever swap out the originals for PAR36 LEDs?...if not, I definitely would in all your Cubs...difference is literally night and day.
BTW, nice little fleet you got going on there.

PACub100 said:
As I was looking at your pics, I was reminded of the headlights I replaced on my 1450. You ever swap out the originals for PAR36 LEDs?...if not, I definitely would in all your Cubs...difference is literally night and day.
BTW, nice little fleet you got going on there.

Thank you. While the LED's make sense, since the charging systems in these are barely adequate for normal usage, I don't like the looks of them. The LED bulbs just don't look right to me. I'm one of those strange ones that notice the small "GE" logo in the original bulbs. In fact, I found a NOS GE headlight bulb at Carlisle last week that ended up in the 782D, since one of the original bulbs had been changed and did not match the other.
J

Is the hydrostat to the left out of it? If so, I didn't realize they went to the aluminum housing on the red ones. Haven't seen a red one in many years.

Yes, it is the original aluminum housing unit. Some of the early MTD/CCC tractors received the cast iron rears until stock was used up. Some of the early tractors after the takeover had the "International" script dashes, IH steering wheel cap, and had body color axles and dash towers like the last of the IH built units. They were using up old parts stock. Since mine is a 1984, well after the switchover, it has black tower and plain dash and steering wheel cap.

I am working on this specimen at the moment for this 682. It is a 1986 Magnum 18 that originally was in my 1811. When I purchased the tractor, it ran beautifully, but other than idle, you could not control the engine speed. I found a low hour M18, and just replaced the engine instead of digging into it. So this sat in the basement for about two years.

Anyway, last night I split the block, and low and behold, look what was chewed up and sitting in the bottom of the engine block: 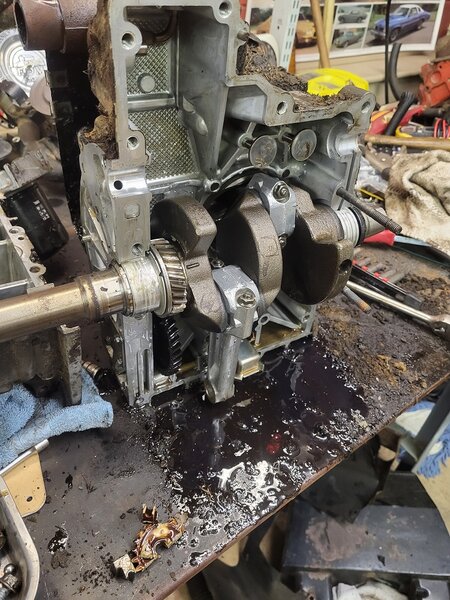 I'm waiting on the OEM Kohler gear, and a gasket set to get this puppy back in operation.. 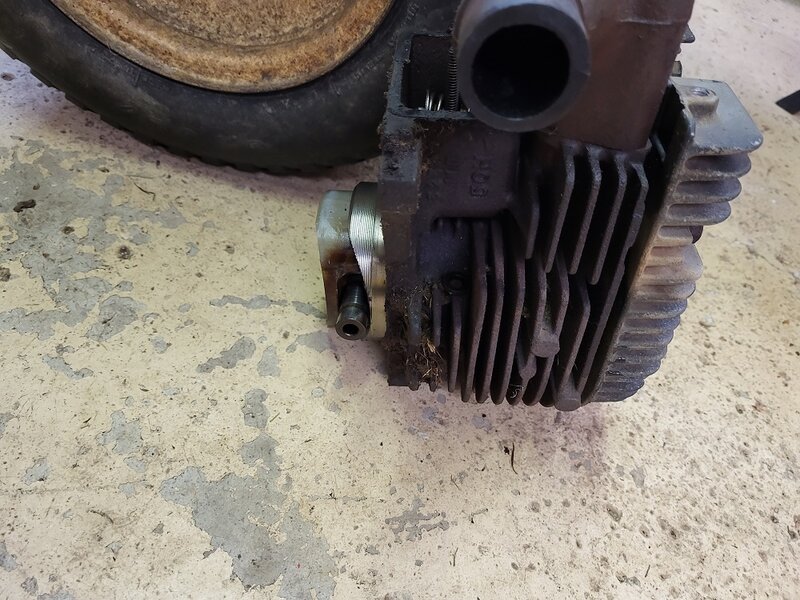 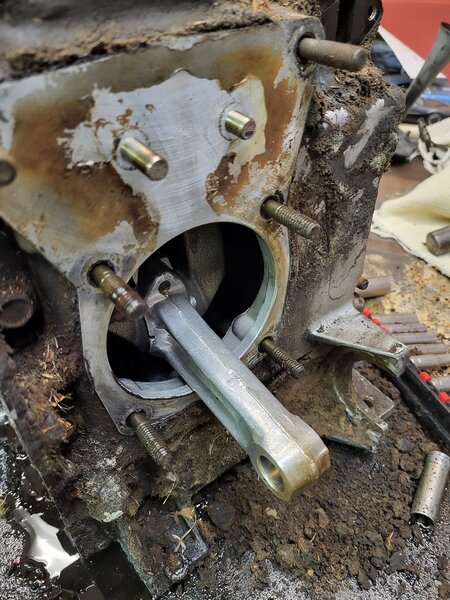 Upon reassembly, the cam and crank will need to be properly phased. The factory overhaul manual is vague on this and this is a critical step. The image is not very crisp. Anyway, does the crank have to be in a certain rotation when lining up the dash mark on the crank, and the small hole on the cam gear?

Still waiting for the gov gear, but I re-rebuilt the Sunstand hydro unit. The previous owner rebuilt it with new bearings and seals, but upon reassembly, he put the directional control lever on the wrong side of the unit. So not trusting his work after such an elementary mistake, the entire unit was torn down and inspected. Fortunately, the only other thing that was suspect was the original input shaft seal. I had one in the parts cabinet, so that is done. 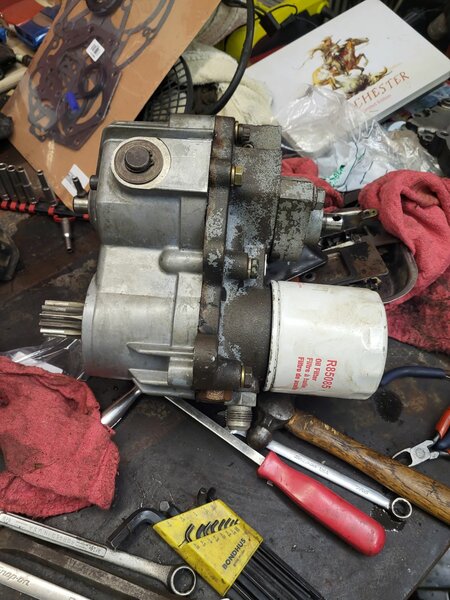 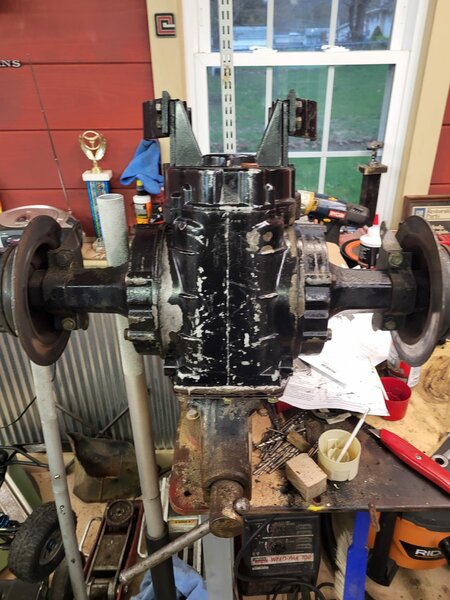 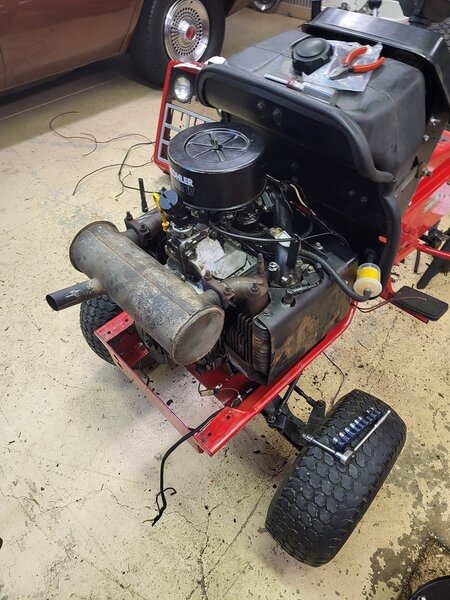 M18 is all put back together, installed, and running well. Waiting on hydro relief valves, and we'll see if the transaxle is good to go.

Good work so far. And I noticed in the very first picture a smokie. You in hot pursuit of the ‘Bandit’?

To quote Jerry Reed, "And can you have a bandit if you ain't got a smokey?"

Here's my other car 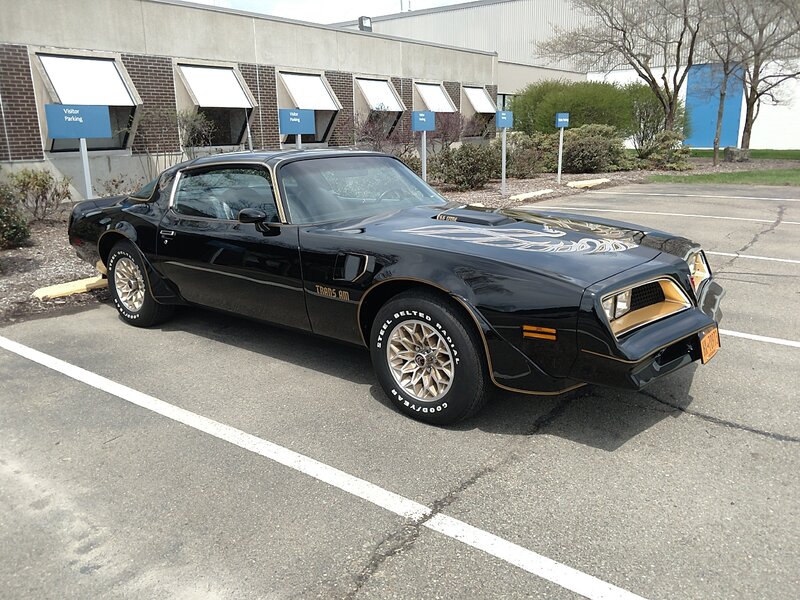 Here's my other car

Now, comes to settin' my hide in Buford T's ride - well - I'd give a Diablo sammich and a Dr Pepper for THAT! Now, you have to show us the light bar and accessories too. 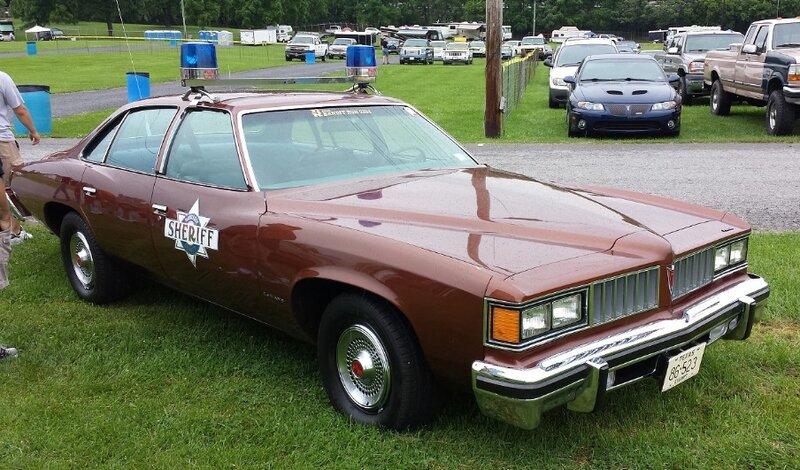 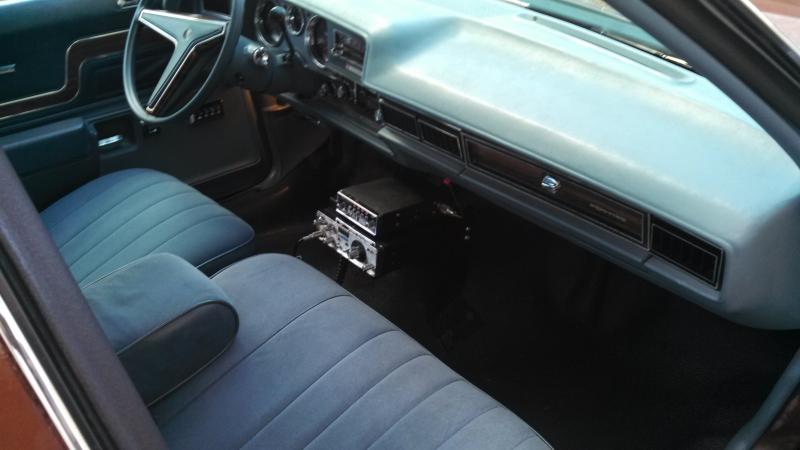 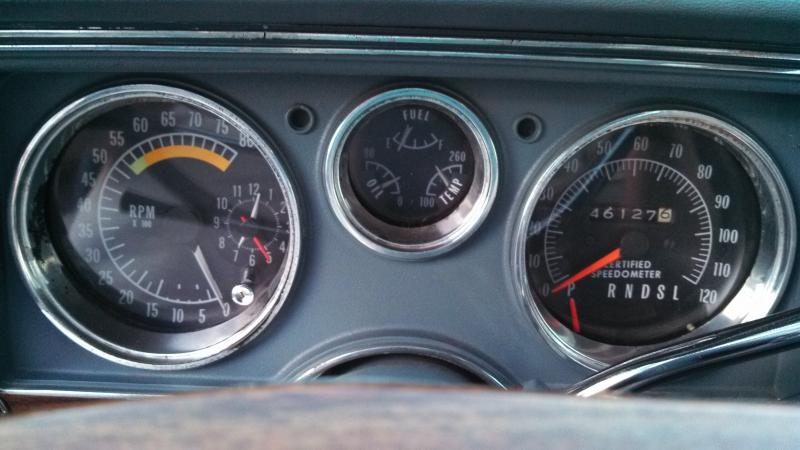 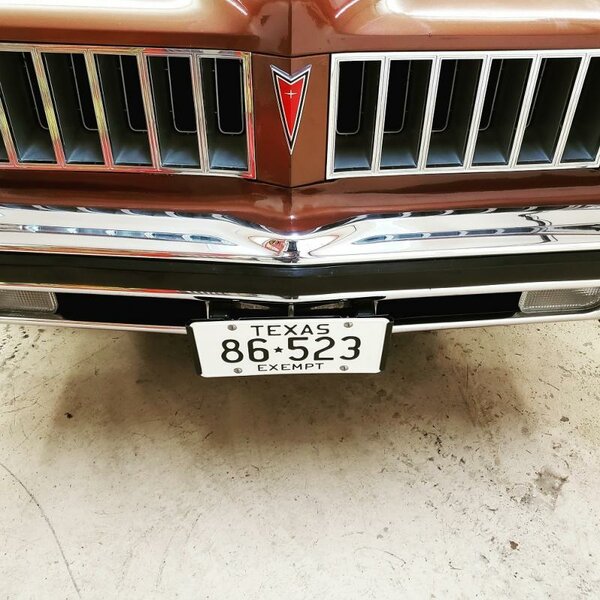 WOW. Is that dash a bonus! Cop suspension too? What was that... Radial Tuned or Rally Radial Tuned - something like that? I don't think they used the F-41 moniker.

Most Pontiacs in that era had this somewhere on the dash: 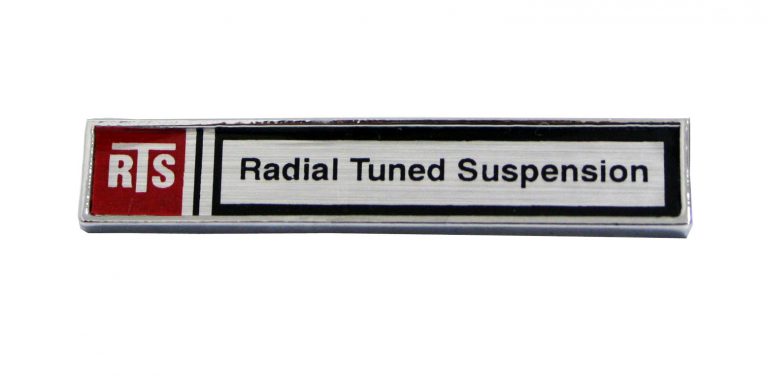 It is a retired police car. It is a full police package car and is documented through Pontiac Historical Services as such.

Todd Utherland said:
Whatever... T/A's are a dime a dozen.

Mine is a 4 speed and only 45k actual miles. 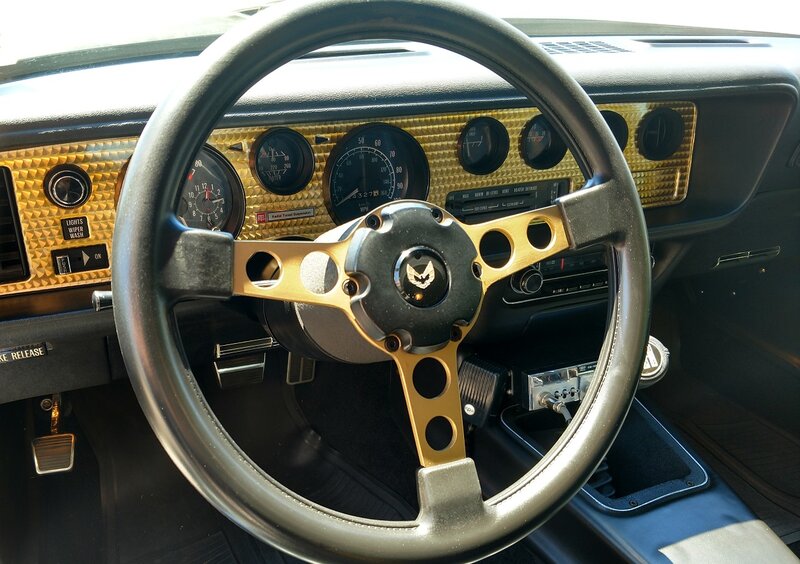 I'd drive the wheels off that. Had a '78 4 speed and was shocked by its performance even with the nay sayers poo-poohing everything after 1970.

Never added a part for performance and never felt it lacking. Used to absolutely SCREAM all over the Monterey peninsula and near-by environs when I was at language school. One of the fun things to note was that it handled even BETTER with three other friends on-board.

D
Pretty sure I got my money's worth