Do you have the humidity like we do here in NC? The dewpoint is 65 and the humidity is 76 percent. Imagine a large pot of boiling water, and you are sitting above the pot in the steam. That's about what it feels like outside. Even the birds are sitting around with their mouths open like a dog panting. I sure am thankful for air conditioning!
Not very good riding conditions.

Same heat with high humidity. I think the cubs are enjoying the break.Havent mowed in 4 weeks. The kids age 7 and 9 have to drive the cubs some but they are parked as far as working goes.
Rained all around me yesterday. May be my turn today.The harley will stay in the barn until this heat wave leaves.

Happy 4th guys.. taking Big Blue out for a run north this morning. Spent an hour last night cleaning bugs off the fairing and forks from a ride two nights ago - forgot to clean it when I got back - ugghh, dried bug juice is hard to get off....76 degrees and 80 percent humidity right now at 6:00 AM.. I'm hoping most of the holiday travel is going to not be today..
D

I see you have not found the answer to bugs on the bike, I have found that Turtle wax sells a spray wax that makes bugs dried on just wipe off with a wet cloth.I have been using it since I bought the Nomad. Works great on the wind shield and water beads nice also. I will post a picture of it next week after I come back from camping with my fiver.Camping for me is a 27' fifth wheel with a 24" flat screen TV and air lol.

Broke down and went riding today despite the heat. It was nice up on the parkway, but coming back was right toasty. The restaurant that I had planned to eat at was closed for the week!

Had to come home and eat a leftover hamburger. Got a nice burn on the arms!

Cheat! cheat! You're supposed to use a tent and a radio.

Hi guys, I just went through the motorcycle section and thought about mine so here's what I built a couple summers ago. It's a '75 Shovelhead custom. 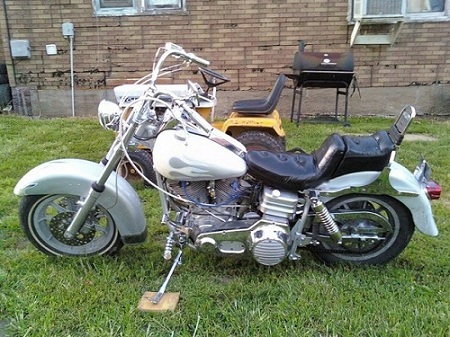 Mark: Nice work - any more pics?
Don T: Since the last post on bugs, I picked up a product called Bugslide ( I got it from at the Harley shop, but its not a Harley product). Works well on the UP bugs I picked up yesterday while running the Hurricane Highway in Alger county MI.. 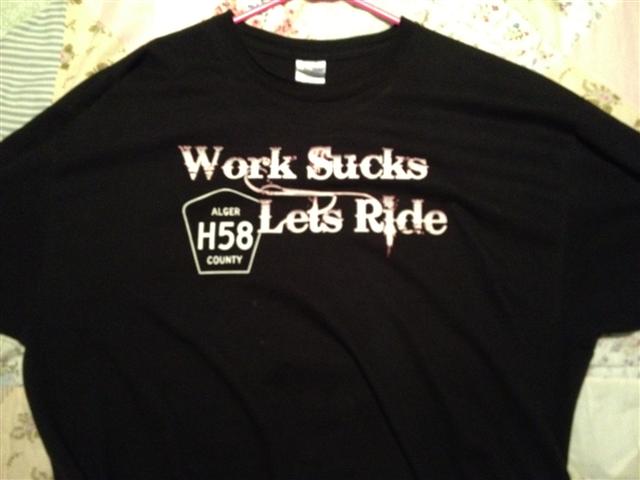 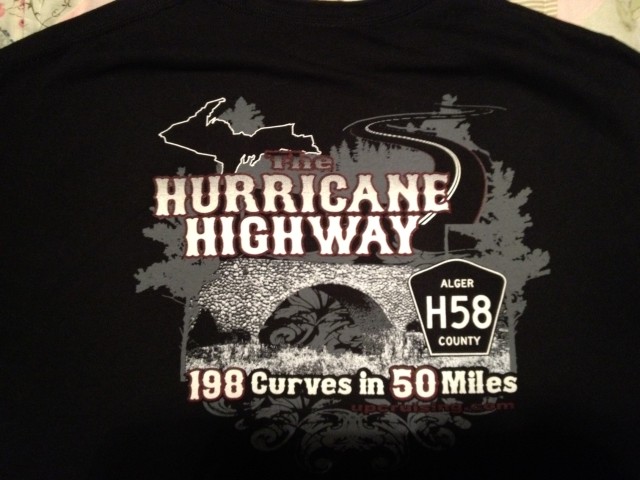 Turtle wax makes a product called ICE. It is a spray on wax that works better than anything i have found. Leaves no chalky residue and works on metal and plastic. It also works good on removing brake dust from wheels.
M

Gerry, here are some more pics. 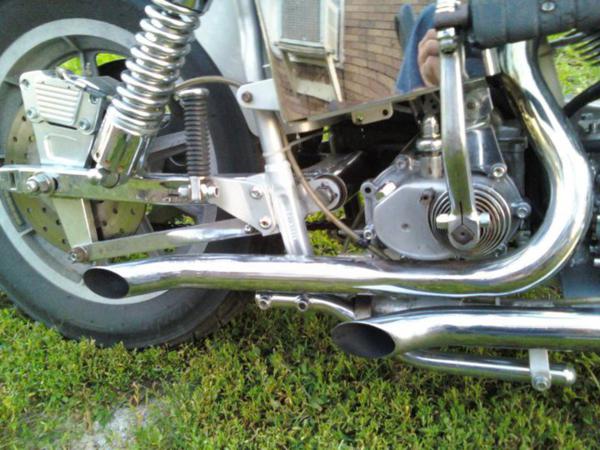 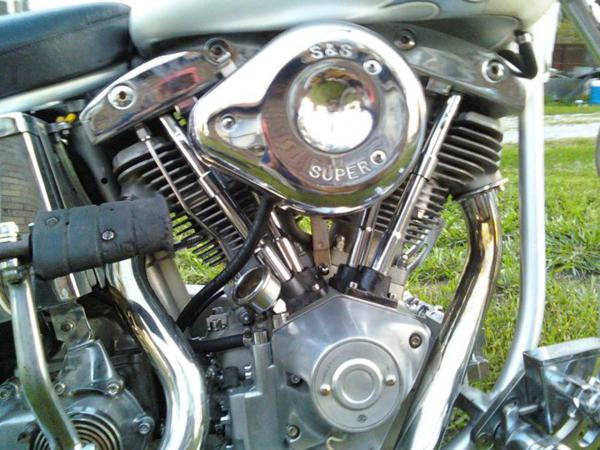 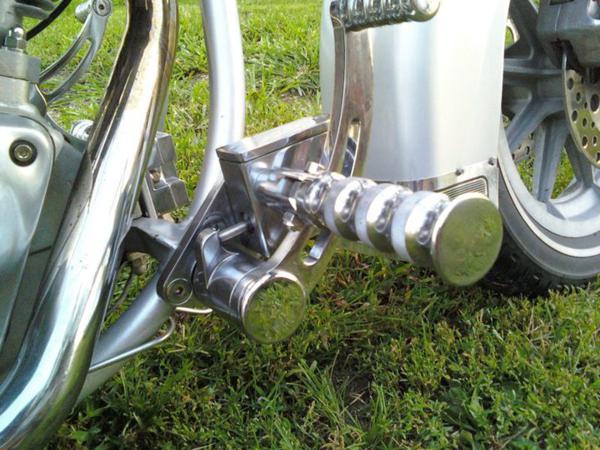 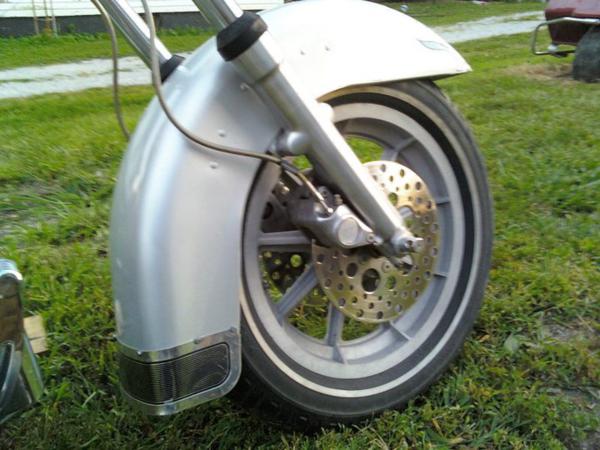 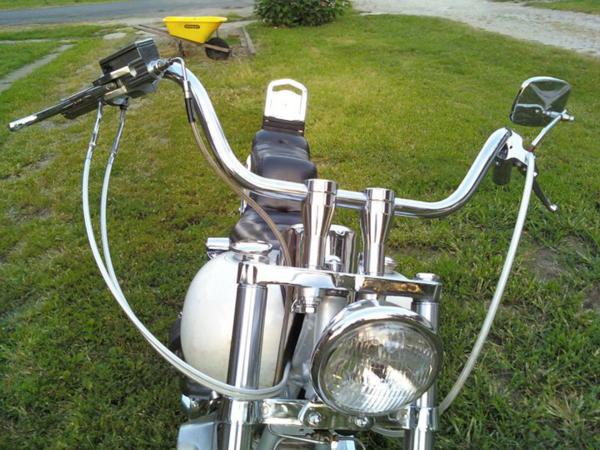 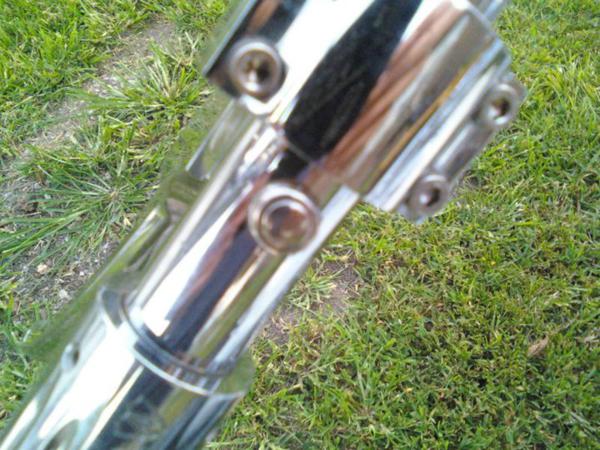 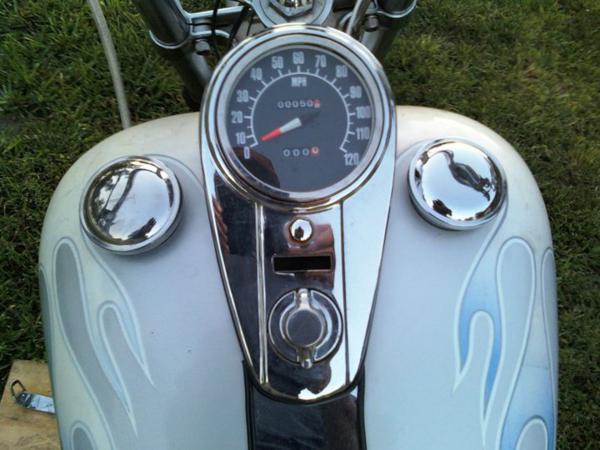 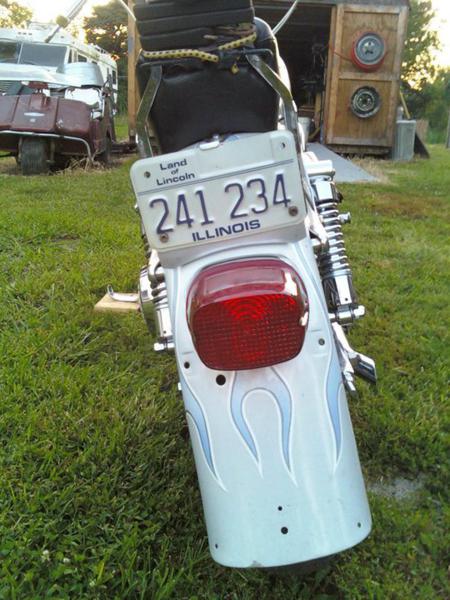 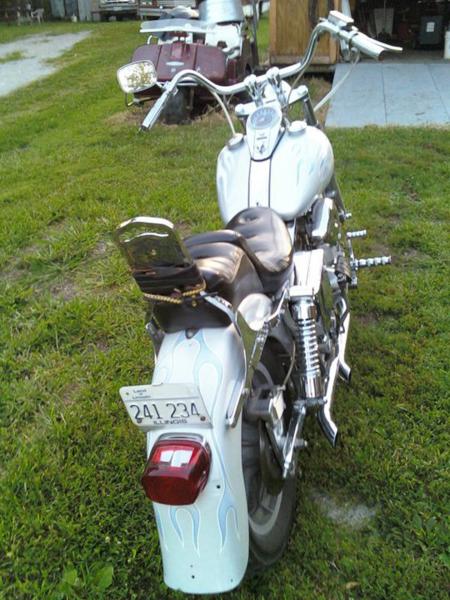 This is the one I'm in the process of building now. 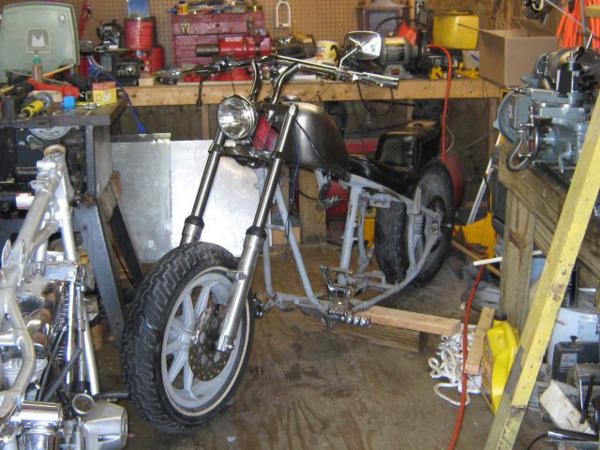 Nice mix of old school kicker tranny and newer wheels and fender.. Put a set of extended bags on that puppy !! ( I'm into the bagger thing, wish I had time to build one, but next up on my list is getting a '54 F100 pickup running).. thanks for the pix..

Well I don't have a fancy Harley but I do have a 1976 Honda CB550.
I am the second owner. PO bought it new and before getting from dealer.
He had extended forks, king/queen seat. and exhaust put on. It only has 5602 original miles. 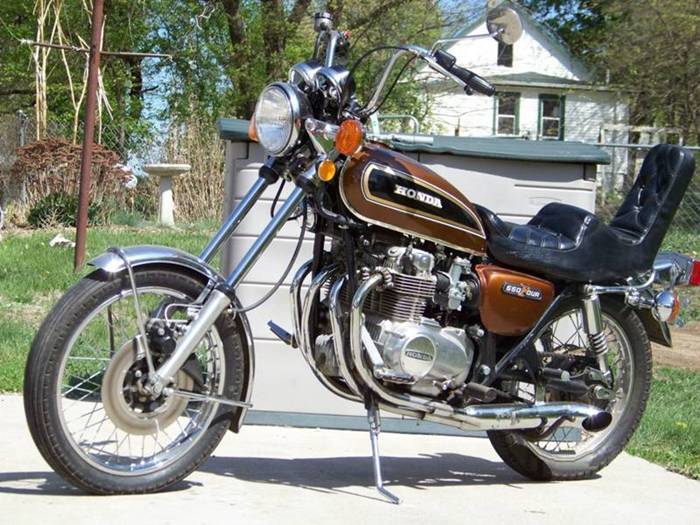 Nice classic! You don't see those in that kind of shape.

Brad:
Nicest riding, smoothest shifting bike I ever had was '75 CB550K with 4 into 2 pipes and a Pacifico fairing. Wife and I rode to the Mackinac bridge and back on it with friends. Back in the day, Cycle magazine had a series on a buildup of one. The nickname for the 550 was the "Gentleman's Express".

Speaking of the Mackinac bridge and bikes, I was lucky enough to be there with Big Blue last week 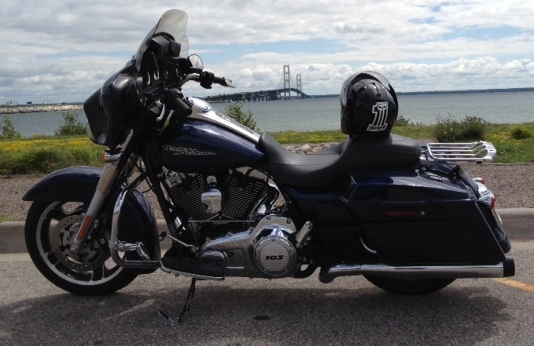 also at the Pt. Iriquois Lighthouse on the southeastern coast of lake Superior 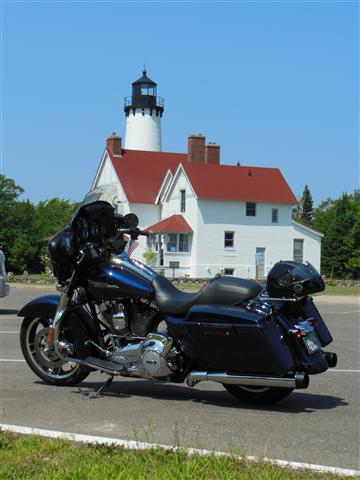 Brad i rode a CB550 for a while back in the 70s. Was a good bike. Enjoyable to ride. Traded it for a Suzuki 500 2cycle 3 cylinder touring bike.We rode a lot and enjoyed a lot of miles on that bike.

Brad:
If you wanted to change from the chopper look, I just found that Cycle article on the Gentleman's Express. Fun reading in any case. (592 CC with a set of 750 pistons ??? )

Anyone else ever had the "pleasure" of installing any GenuWine Motor Company electronic "add-ons" on their Harley? I don't know if the tech writers and engineers are playing a game to force all buyers into having Harley service do all the work or they're just plain incompetent (leaning towards the latter).

My first foray into this arena was installing the factory Harley branded Garmin Zumo kit. One of the options is an interface with the Harmon Kardon stereo so that when the GPS talks, it mutes the music and plays the GPS audio over the sound system. Two hours into that installation, I figured out that I needed another cable, not listed anywhere except in the installation instructions. HD 1, Parts guys 0 ... Next was trying to figuire out where to put the extra three foot of cable (times three) that had to be stuffed into the fairing.

I installed the Siren II kit for the security system - instructions were entirely wrong for any bike with ABS brakes. Also the instructions have you installing an antenna that is never identified as being used for a pager system - you have to glean the fact that pagers (not supplied with the unit) are fully functional once the Siren kit is installed, without further work , just pays yer money and cut it out of it's hard shell sales package...

I changed the "3 louver" fender tailight for one that is a combo stop/tail. The instructions said there were two T20 Torx screws (they're inside the fender, not viewable with the tire on). They're T-27 and almost got cammed out before I discovered the correct size..

Now to my current frustration ... I bought the Bagger speaker system. Instructions say to disconnect a cable if it hooked up - it is- and unhooking it disables the GPS talkthrough feature. Secondly, the cable I have that should work with this also, doesn't have the correct size Amphenol connector to mate with the 35 pin interface on the H-K unit. BTW - the two wires they want me to unhook are the signal inputs to the CAN bus, which is a parallel connection bus, hopefully I can just splice the new CAN source on.. ARRRGGGHHHH - now I feel better!!
D

I understand your frustration when you buy HD add ons.I know a few guys that had a hair pulling time getting every thing (cables and brackets) that we not sold but were needed to install everything and have it all work. A buddy of mine did what your doing and when for a ride and lost his antenna .I think he added a shake proof washer with the new one .He is in Alberta working , if he were here he would be a great source of info for you. I don`t think the local HD dealership are talking to him after a few phone calls and a visit lol. Good luck and when you take it from the package it is yours.

Took a ride with about 90 other bikers today to help clear my head after the loss of my brother-in-law. It was a ride to help fund a veteran tribute park. We got soaked coming back, or at least I did. It poured the rain along with some heavy lightning. We toured the Richard Petty museum just before the rain started.

That was the highlight of the trip. Super place to visit. Guess i'll be cleaning on the Harley all next week!