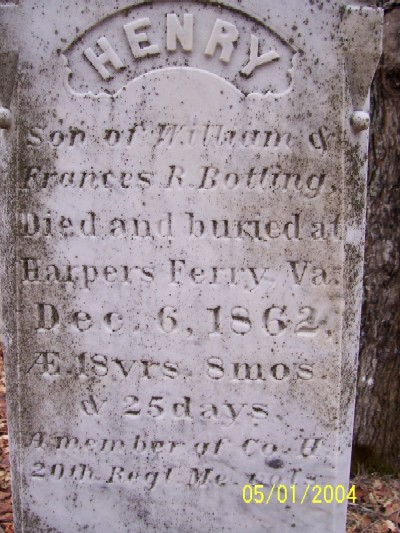 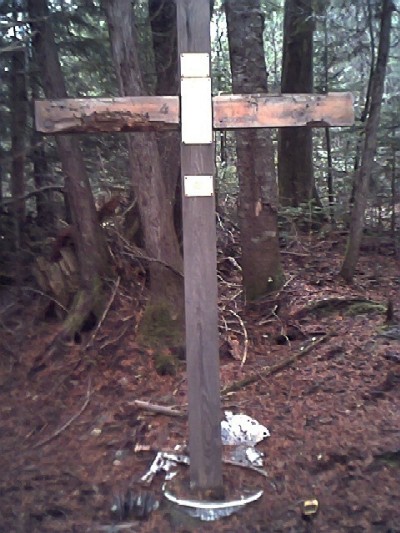 This is from a WW2 bomber crash, just SE of here (maybe 15 miles, as the crow flies).
J

from book "Battle Cry Of Freedom"-although Lee expected his army to live largely off the land, he needed to poen a minimal supply line through the Shenandoah Valley, especially for ammunition.but the union garrison at Harper's Ferry blocked this route. Known as the "railroad brigade,"this unit had the duty of protecting the B&O and the Chesapeake and Ohio Canal.When the Confederate invasion cut these arteries east of Harper's Ferry, McClellan urged Halleck to transfer the garrison to the Army of the Potomac, which was marching from Washington to intercept Lee. But Halleck refused- an unsound strategic decision that unwittingly baited a trap for Lee.
J

its too bad Lee couldent have dropped a note with his plans that would have to Lee netting the 12000 bluecoats like fish in a barrel. any ways....the out come after all was, indeed, not in favor of the Union Army. lets read on and see how so did the C.S.A . keep in mind that Lee and McClellan served togeather during the 1848 Mexican War, thus knowing each other well. McClellan made careful plans and didnot order the men forward untill daylight on sept. 14, eighteen hrs. after he had learned of Lee's dispositions.as things turned out,this delay enabled Lee to concentrate and save his army. a pro-confederate citizen of Maryland had witnessed McClellan's responce to the finding of the lost orders and had ridden hard to inform Stuart, who passed the info. along to Lee on the night of sept. 13.Lee orderd troops to block the passes through South Mountain.next day 2 Union corps fought up-hill against D.H.Hill's Confederate division defending Turner's Gap.taking heavy losses,Hill's hardy band hung on behind stone walls and trees untill Longstreet came up with reinforcements and held off the Federals untill night fall.withdrawing after dark,these out-numbered rebals had given Lee an extra day.meanwhile another Union corps under William B.Franklin had smashed through Crampton's Gap 6 miles to the south after a sharp fire-fight with 3 Confederate brigades.despite great numerical superiority,Franklin advanced timidly southward toward the forces besieging Harper's Ferry and failed to arrive in time to save the Union garrison at the Ferry!
J

"i would fight them if they were a million. Gentleman we shall attack at daylight tomrrow."-General Albert Sidney Johnston,staff meeting before battle of Shiloh.
J

"The hen is the wisest of all the animal creatures because she never cackles untill after the egg is laid."-Lincoln,describing the boastful General Joe Hooker.
L

You can still see the path my great, great uncle took on his way south.

A relative, great or great grandfather on my mothers side, died at Andersonville - dysentery. What a way to go....
L

Lanceing A Wilcox
Age:105 years, 26 days.
Lived 1848 to 1953
Last & oldest civil war surviour of Wisconsin
Took his first plain ride at the tender age of 98, married his second wife( my great grama Bucas) at the age of 90.
Would walk up to 4 miles a day up to the age of 103.
Fought in many major campains during the war, and was awarded different medals through out his military term.
J

a while back i finished a book called "The Westren Front" in my opinion of all the wars that i know of, ww1 was the worst war ever. of course i could never deny the Holocost. lest we forget, lest we forget where we been, how do we know where we are going?
F

Bump.
I'll always wonder how long it took Henry Botting's parents to learn of his death and burial at Harper's Ferry, over 800 miles away from home.
F

Frank C. A wonderful reminder that freedom doesn't come without a price tag.

Thank you Dave for sharing that great audio clip.

More than that, thank you to each and every serviceman on the forum who has served and especially to those who have lost a father, brother, son, relative, or friend in combat.

God Bless all of you who have sacrificed so much for our freedom.

A heart felt thank you from the Stertz family!
R

We must never forget .... lost an uncle on Omaha. "Only two defining forces have ever offered to die for you, Jesus Christ and The American Soldier. One died for your soul; the other for your freedom." May God Bless those that gave the ultimate.

My oldest brother was off Okinawa during the last months of the war when the Kamikazi attacks were at their worst. Never talked about it afterwards.