Somebody i know is giving me a K321 Fully rebuilt. Just needs a crank . The crank he has for this motor is designed to work with a pump. So i’m looking for a Good used one that is cut already. Hoping it was cut by a Reputable machine shop. Thinking of putting this in my 122. I think that would be cool
S

I have a 149. But the 122 seems to be Cooler. I may change mind. But very happy to fall into this find. Still a little shocked. That i git this lucky

I would also suggest studying the Engine build and balancing writings of David Kirk (Kirk Engines box at top of page) and consider his crank balance plate. I built a 126 with a 14 horse block, and 12 horse flywheel as described. It was awesome-until my wife moved us to a postage stamp sized lot with a pool covering most of that.
S

But Jim you could have cut all the Neighbors yards

Good idea! I finally gave in again to my case of yellow fever and bought a 782 project. I may do just that once I get it operational.
S

782 very cool. There was one here for sale on Craigslist Wexford Pa. Owner said it caught fire. Might be free
S

That was a Month ago. Check it out
S

But then again your Far away
J

782. Yes cool, but I'm having buyer's remorse of a sort. I've grown up an IH enthusiast, but now I've enthusiast-ed myself right into an off-topic tractor since it's a CCC-made machine.

I may live far away, but I've been working in Cleveland, and I think I may drive one week to maximize my Cub Cadet options. Wexford isn't nearly as far from Cleveland as it is from St. Louis.
S

Hey Steve - you just gotta get this stuff figured out. IH changed to a wide frame so the 14hp and 16hp engines would fit (instead of using that notched frame like they did on a 147), So, the only way a K321 (14hp) is going to fit in a 122 is if you change the flywheel and shroud to the 12hp version (as has been stated) or if you cut up the frame to allow the original flywheel and shroud to fit.

Now, I really don't agree with Dave's opinion on a 109 vs. 147, but to each his own. If I had my choice of these 2 tractors I'd take the 109, primarily because I just don't like the electric lift that was standard on the 147. And the 147 doesn't have the center removable frame cover. The only other thing going for it, is that it has lights as standard. Now, a 109 is a nice tractor, light weight hydro with the 10hp engine (and the funky green stripe hood decal). You can drop a K321 (14hp) engine directly in place of the 10hp as long as the K321 has the correct base, and hopefully the correct crank for the S/G basket pulley and PTO. The 109 is standard with armstrong (manual) lift so it won't have a ported hydro pump that you would have on a 149 and that you need if you want the infamous CC wide frame HYDRO Lift. So yes, there are pros and cons between the 147 and 109. If I was you and the 109 needs a replacement engine I'd certainly be looking to drop in the K321, and I'd be looking for a ported Hydro pump and all the HYDRO lift parts, and the headlights and tail lights so you could make it one of the best Cub Cadets ever built - THE 149.
That's my story and I'm sticking to it. 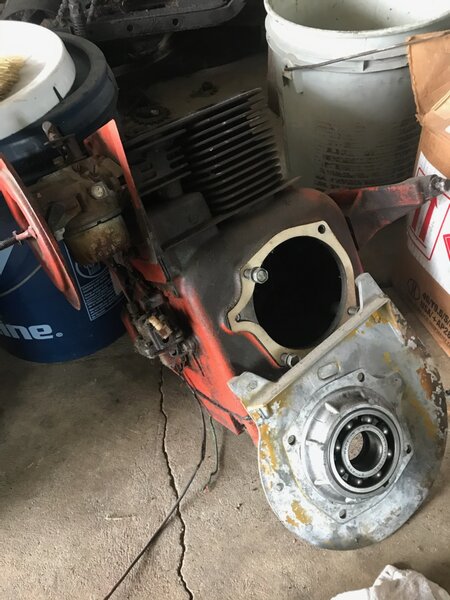 R
What was it?