Sometimes I think Hydro has been breathing "Special Air"...

OK Steve, here is the hydro angle plow mounted and ready to go… 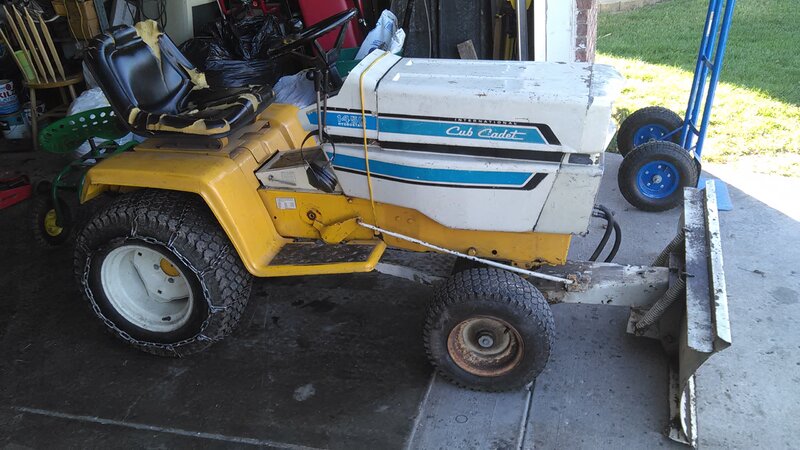 snicklas said:
Steve, as mentioned, yes it is for dual hydraulic controls. The "standard" one which it the implement lift (on a twin stick it is the inside stick, closest to the dash) that raises and lowers the implements. The "optional" one is to control the front hydraulic outlets (on a twin stick, it the outside stick). The only factory implement, that I know of was the hydro angled blade. I have a hydro angle blade also. It is really nice to be able to angle the blade from the seat. I did it the manual way for 40 years. I had the 1450 for nearly 10 before I got the hydro angle blade. I do have a picture of it mounted if you would like to see it.

Hey Scott - couple clarifications to your details above.
1 - I know you said the 1100 was unique but I don't think it was considered part of the Quiet Line series. It didn't have the side panels to enclose the engine so it wouldn't have been "Quiet". Maybe Kraig has a brochure or something that would verify this.
2 - you included 1050 in the group of hydro models. There was never a model 1050 as part of the Quiet Line series.

As Kraig says (implies), ole eagle eye is at it again. I'm sorta surprised he didn't mention these things.

Based on this, see first image below, I would think the 1100 is part of the Quiet Line. 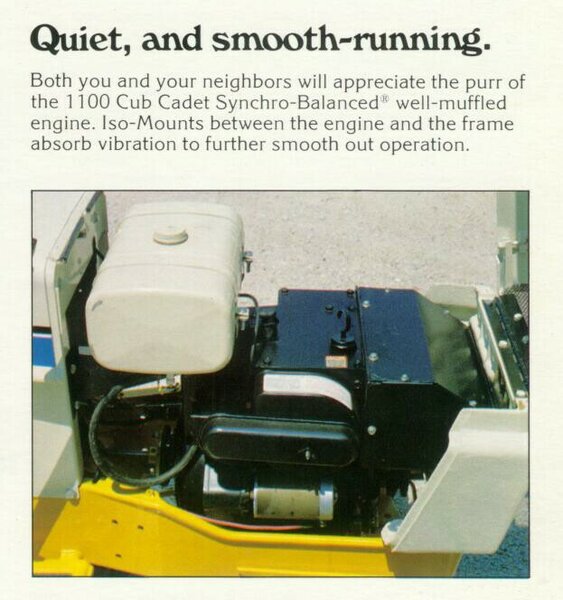 Here's the rest of the brochure: 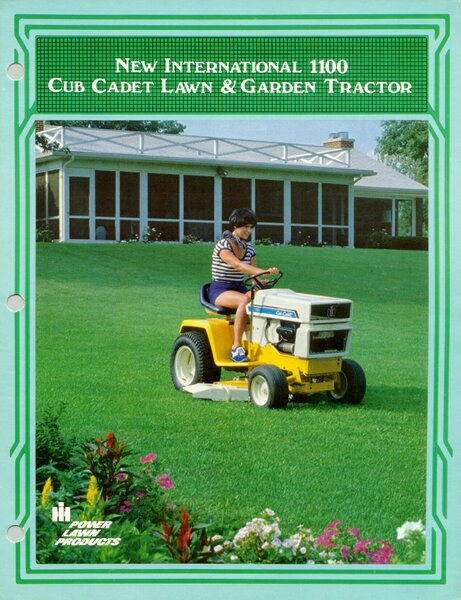 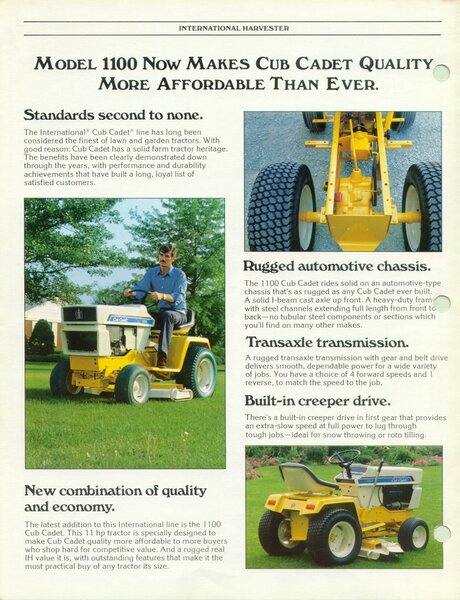 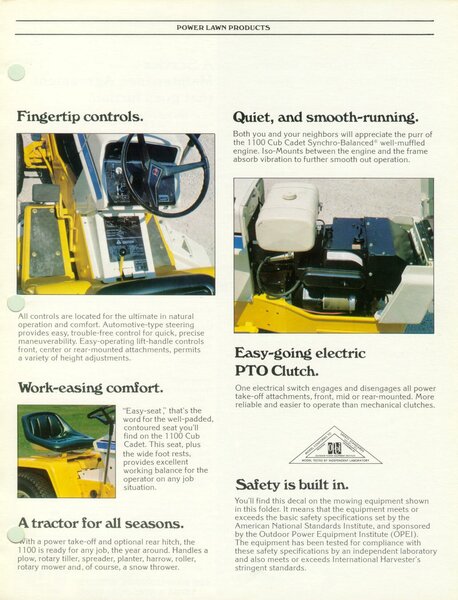 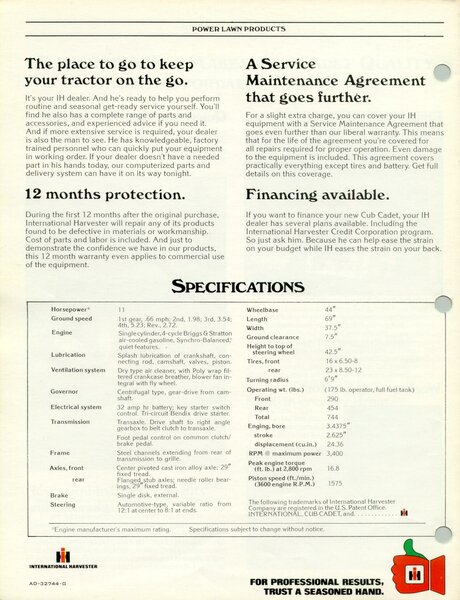 I was testing you.

Thanks for the clarification on the 1050.... It was getting late and I guess I was just on a roll of including a 10 horse hydro in all of them....

Just took off Blades on the 38” 122 to sharpen. The guy that owned it had Die “cutter disc” for cutting steel up under blades. Was that for catching the “Grease” from the spindles?? What Dah?
S

If so. not a bad idea. Please chim in!
H

Kraig - Oh Great One Keeper of the Photos, AND Lots of Other Reference Materials - hmmmm, nice try but NOPE, 1100 is not part of the infamous "Quiet Line" series (in my view). In order to be part of the Quiet Line series the tractor must have the side panels fully enclosing the engine. You must have some Quite Line brochures that refer to this.
The EAGLE has landed.

Steve - now about that "Special Air" - I was only half joking. If you let the air out of those rear tires and break the beads you'll end up causing the tires to show dry rot cracks.
S

But it says “Quite and smooth running” in the Brochure.
S

That brunette on the tractor
H

Stevenovick1 said:
But it says “Quite and smooth running” in the Brochure.
Click to expand...

Steve - yup, it says "Quite" and smooth running. That ole Briggs and Scrapiron just Quites.
(have you been drinking

Is that a Blue scarf.

I have to agree with Harry, I do not see it coming in this brochure. 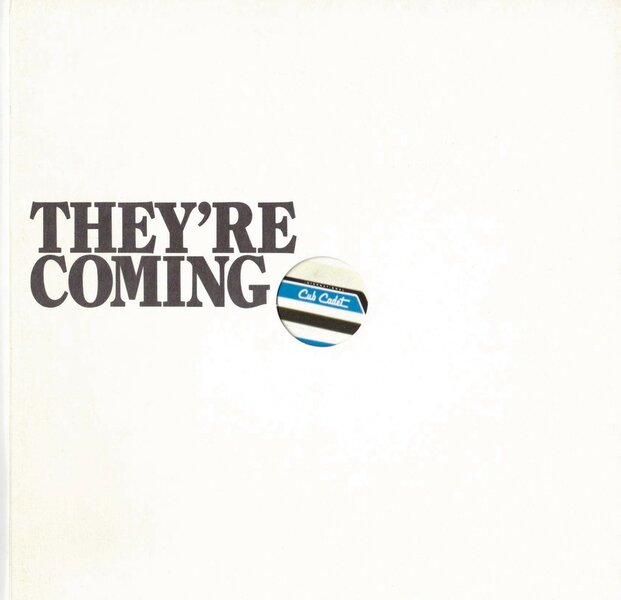 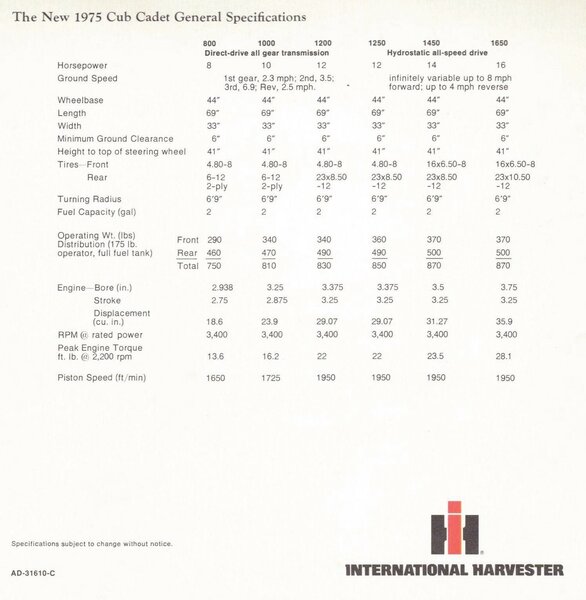 I never tried to put side panels on one of those, anyone else try?

I agree. the orphan 1100 is not part of the Quiet Line series, but IH did tout it's ISO mount engine and quiet operation.
S