I have been thinking about Jeremiah’s engine with the valve issue and what likely happened, so get out your darts.

It appears the valve hit the head many times and the valve stem is bent (well most likely).
Some believe that that the valve did NOT hit the head and that is almost impossible. However the head had witness marks right above the exhaust valve, more on this later. A loose impediment floating around the combustion chamber would have left marks everywhere and not just over the exhaust valve. Normal engine operation does not allow the valve to hit the head, something else had to happen. The mostly likely candidates are broken valve stem, retainers, spring, etc.

It is now later. The retainers failed and the valve is free to go upward, but limited by the head. An engine running at 3600 rpm has an exhaust valve rising every other cycle. This means the valve rises 1800 time per minute or 30 times per second. The floating valve would cause loss of compression and the engine would quit. Let’s say for argument sake the engine took 5 seconds to come to a stop. An engine with compression loss will continue to rotate longer than one with good compression. Assuming the engines RPMs fall in a linear manner, the valve will strike the head 75 times in 5 seconds before the engine stops.

The witness marks on the head are not in the same location as you might expect, there is this possibility. Imagine trying to drive a nail with a hammer into a piece of steel plate. No matter how square or true you hit the nail on the head, it will eventually bend. This is the same for the valve (nail) and the engine head (hammer). In this case the nail is moving and the hammer is still, but the principle is still the same. The valve started hitting the head directly above the valve. Then the valve stem began to bend just a little and the valve started hitting the head in a slightly different spot. The lifter and valve rotate due to the cam’s contact with the lifter is not centered. Thus the bent valve makes contact in an offset rotating manner as indicated by the witness marks on the head. The valve bends more and more and the offset hit become more off center ( directly above the valve guide). The engine quits and the valve is resting off the seat

Does the 42# valve spring rate force relate/counter the force the cam imparts on the lifter and valve? The valve springs main purpose in an engine is to keep the lifter riding on the cam lobe at all operational RPMs. When RPMs exceed a certain level the lifter will no longer ride on the cam lobe, the valve will “float”. The spring force has to be great enough to keep valve/lifter riding on the cam lobe, especially when the valve changes direction and is closing. When the cam lobe surface is traveling away from the lifter, the springs force keeps the lifter moving at the same velocity and direction, downward in an upright Kohler. As engine RPM increases so does the velocity of the cam lobe, and thus acceleration is present (F=MA). The spring needs to accelerate the valve and lifter fast enough to keep up with the cam lobe surface heading in the opposite direction. The upward force of the cam imparts on the valve and lifter is generated by the engine’s combustion. Through the gear reduction (crank and cam) and small height travel of the lobe when compared to the crank shaft rod journal height travel, the force applied through the cam to the valve and lifter is greater than the valve spring rate. The spring rate force on the valve train is not as great as the cams force. The cam has enough force to slam an unrestrained valve into the head, likely enough to launch it out of the valve guide. Assuming the head is missing and RPM = 3600.

Jim: You certainly have been doing some thinking on the topic of my valve issues. However, as Sherlock Holmes {and Nic Bextermueller; and Joe Friday) might say, "We need the facts, Mam, just the facts."

I have just gotten off the phone with the party in possession of the tractor, and pictures of the valve stem/spring/keepers will be posted before the weekend is out.

That being said, if I'm following the conversation correctly, I agree with you and Nic (against Dennis) that the cam lobe rotating at 1800 RPM will generate considerable force on the tappet and valve (you do realize that the cam travels 1/2 the speed of the crank, right?). However, I also agree with Dennis (against Gerry) that the valve seat is the hardest part of the whole block. The valve guide may be damaged, even if it doesn't appear to be damaged, I would replace it as a prophylactic against future failure caused by unseen damage.

Personally, I think you were spot-on in your assessment of what caused the damage, and I find your analysis of how the head got damaged inspired.

Again, once we get the facts in, we can better assess the why's and wherefore's. Like Dennis, I would much rather deal with a bent valve than a worn/broken rod.

My thanks to all who responded. This engine will get returned to service if at all feasible (we don't have another option at present).

Edit: Aside to Harry & Gerry: the previous owner of the tractor is a person of impeccable integrity and a real gentleman. He did not misrepresent the engine trouble, rather, he was up-front about it. He knew the engine lacked compression, and needed to be opened up; he just didn't feel like messing with it. He had a new zero-turn tractor in the garage, he was just looking to downsize, and considering the overall condition of the tractor I was, and I am, willing to help him.
J

I am not a gambling man but I would bet on my conclusion. Sometimes all the facts are not available and never will be. Not Sherlock, Joe Friday from Dragnet, Sherlock "Elementary my dear Watson".

I highly doubt the valve seat is damaged. The only donward force acting on the valve is the spring and combustion and in this case they weren't. I agree with Dennis that the engine can be restored to running order at minimal cost.

As to the reason why and how to prevent it, hard to say without looking at the engine myself. Not checking and adjusting valve lash will cause damage to the valve train.

Jeremiah...... You do understand humor ?? No offense was intended, just a grin about "lost compression" . Dennis and I agree on many things, have different views based on different experience on some. Long distance diagnosis via internet pics is always good for a laugh. BTW, I agree with Jim's version of what happened..

Gerry: Sorry I missed the hyperbole. I guess I was a bit over-sensitive. The previous owner feels terribly distraught about the situation. I told him not to worry, but I think he remains concerned. I probably would be concerned too if I were the seller. We both had rather hoped that the valve was simply stuck and that opening it up; either removing the head or taking the breather cover off would offer a way to remedy the problem. I'm optimistic that the most I'll have to do is replace the valve guide along with the new valve.

As posted on the main forum, the shot of the valve stems look as though the keepers are in place, unless I'm missing something. 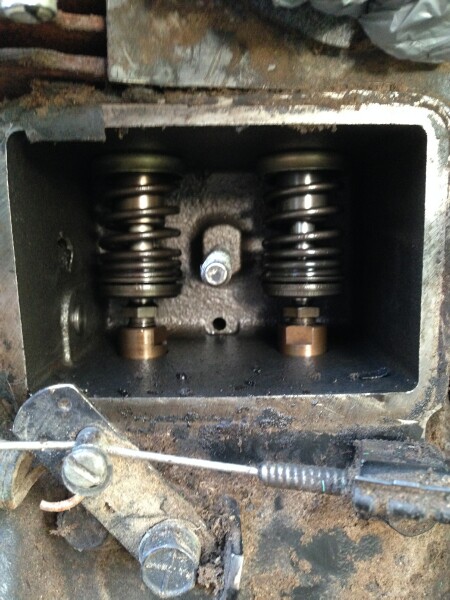 Photos posted previously, so you don't have to follow the link: 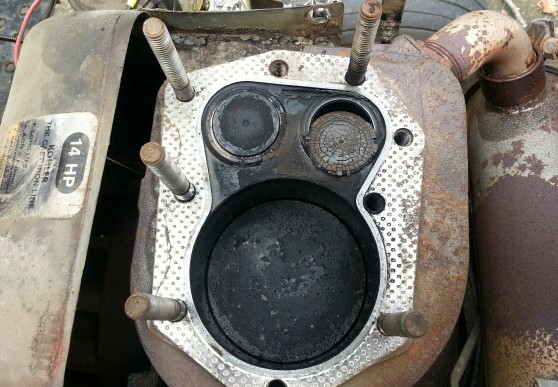 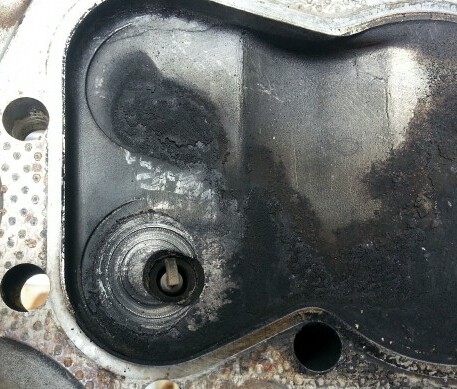 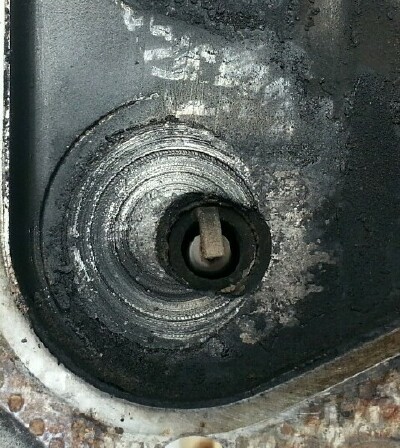 The valve stem, spring, retainers, etc. all look OK. The only thing I see is the exhaust valve tappet adjusting screw is out more than the intake. However that does not seem to be enough to make the valve hit the head, but it could be.

I would try to ask the previous owner if the engine was worked on just before it "lost compression". This doesn't happen to an engine that has been running for years.

There was a full head gasket and not just remnants of an old one?

What is that "spot" on the side surface/wall to the left of the exhaust valve spring?
J

Never mind about that last question, I remembered there is a knock out in the cssting for oil to slosh/sling in.

Jim (and others) at this point we think the exhaust valve adjustment must have been the issue. We believe, but can't prove, that the exhaust valve stuck open and then was adjusted for "proper gap" so that when the engine was turned over the valve hit the head (must have made a racket) until it bent over and no subsequent noise was made.
At least, that is the working hypothesis for now.