I am an early, early gear drive cub guy, so I need some info on this.
Been looking at the 149 and 169 tractors. Was the hydraulic lift on these tractors optional? I noticed some have the hydraulic lift, and others have the manual lift.
Don't make sense to have a manual lift on a hydro tractor. At least to me it don't.
This will give Harry something to do!

I'm not Harry, but I am a wide frame, hydro guy also. (That's all we have)

On the 149 tractors, lights and hydraulic lift were standard.

On the 169, they had issues getting some of the components (I believe lift stuff, since it has a ported pump) so some of the 4005 of them were made with a manual lift, and some had hydraulic. There was a "dealer add" option of having a manual lift tractor "converted" to a hydraulic lift. The 169's did have lights standard.

On the 109/129 standard was a manual lift and no lights, but both could be added as options.

Another odd option for the Manual Lift Wide Frames, was an electric lift, kinda like the 147 had, except, it went inside the frame, the same place as the hydraulic cylinder was (it wasn't "outside" by your right foot like the 147). Lights were an option for all Cubs, and "assisted" lift had different options throughout the years. (The belt driven hydraulic pump, or in some years, the electric lift (which I think was 1x6/7, 1x8/9 and Quietlines)) 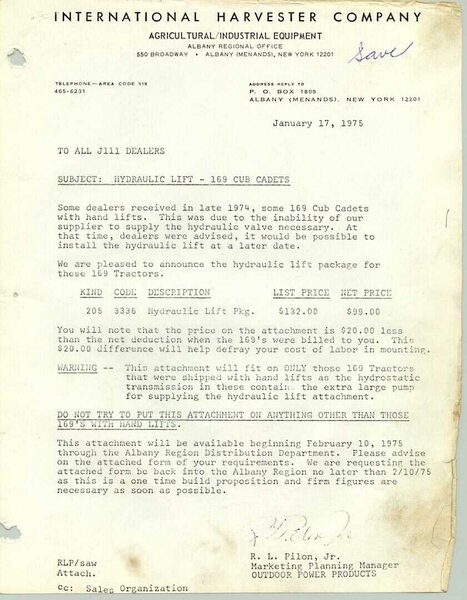 That would explain why. Thanks guys! Harry must be taking a nap.

mgwin said:
That would explain why. Thanks guys! Harry must be taking a nap.

He probably had a coronary when I threatened to put a Kubota in that 169!!
K

I did the same. Piston, hoses, valve w\linkages and the pressure valve & spring. works well
K

I also had a local hydraulic hose shop make new hoses for it.. had them made 1" longer. They were identical to the old ones as the old ones were hard as a rock..
H


mfrade said:
He probably had a coronary when I threatened to put a Kubota in that 169!!
Click to expand...

NO, I didn't have a coronary either. My Dr. just did an EKG and the ole ticker is running like clock work.

Now, Kraig's post provides all the evidence of what IH did, although I think the Marketing Manager is streeeeeetchinggggg things a bit. The ported pump isn't "extra large" (hahaha)