How My Cub Cadet Got Its Name

From time to time I've had someone ask me how I've come up with a name for a particular Cub Cadet of ours. It's simple. In the case of the 782D being referred to as "The D". Short version of 782D. The Keepsake 1650 is one from a coworker's family and they blessed us with being the next caregivers of it. Fancy's 1650 is the 1650 that we purchased from my ex-sister in law and her husband. I had asked many years ago to one day acquire it and they never forgot that request. When I went to pick it up Angel told Fancy (our boy kitty ) that I was bringing home a Cub Cadet just for Fancy. Fancy has never forgotten that either. He knows which 1650 is his. However, the way that our 102 became known as Clarence the Cub Cadet is a story that raises eyebrows and yet very true. Angel suggested that I share this with others. I hope that others will also share their stories of how their beloved Cub Cadets (or other tractors) acquired their nicknames.


Clarence (102) joined our family in July last year. A gentleman that I met at an auction informed me of a Cub Cadet that he had and would like to find a good home for. He couldn't remember if it was a 102, 122, or 126. When he bought the house and building at a neighbor's estate auction he also purchased this Cub Cadet. I went to look at it and immediately fell for the little guy. The Cub Cadet was a 102 with a Sears Craftsman snowthrower mounted on it. I had promised Angel that I would find a good loving home for this Cub. Well... by the time I unloaded him off the Dakota and drove him around .... (the rest of this story you will think I am crazy). Anyway as I drove the 102 around the yard and looked at it I kept seeing this totally wonderful gentleman off to my right side. He was telling me how he loved using this Cub Cadet and of the improvements that he made over the years and how I would love this little Cub the same way he did.

Well, long story short, I told Angel that I had to keep this little fella and his name was Clarence. Angel just smiled and said that i would never get rich always keeping every Cub Cadet that I found. The real Clarence was a WW II veteran, never married, ran a small machine and repair shop in Garden City until his death in 1998 or 1999. He used a couple of Cub Cadets to do cemetery lawn mowing and other Cub Cadet type duties for himself and other townsfolk. I went to work the following Monday and described the gentleman that I had seen and heard when I first got the 102 to a couple of coworker's. One of the fellas informed me... that gentleman was none other than the late Clarence Bergman. That is how our 102 became known as Clarence the Cub Cadet.

Now I know that you will forever think of me as not just crazy but also... a tad bit "touched in the head." Below are pictures of Clarence when he arrived home. 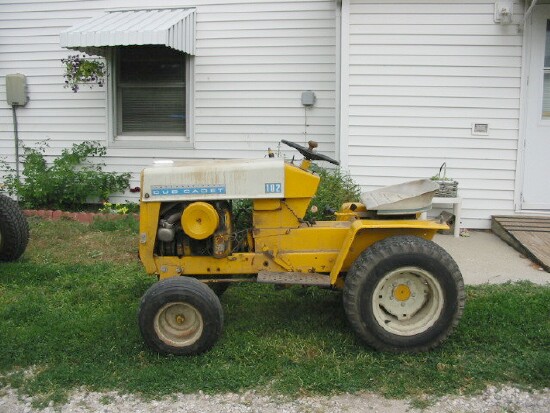 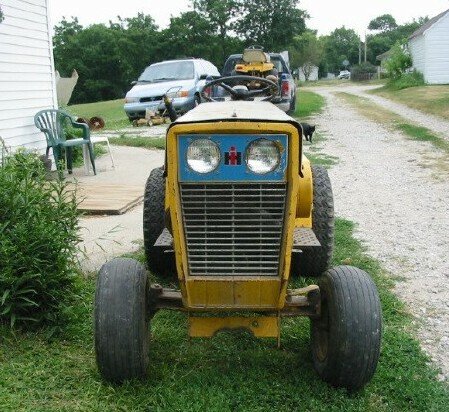 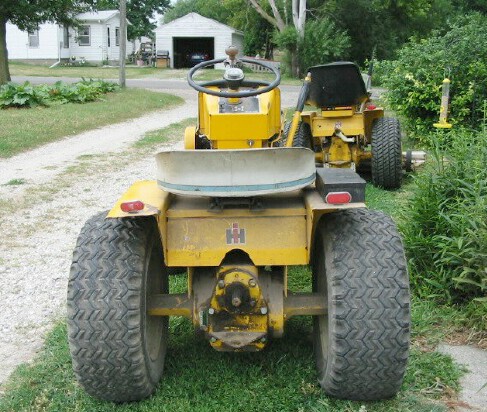 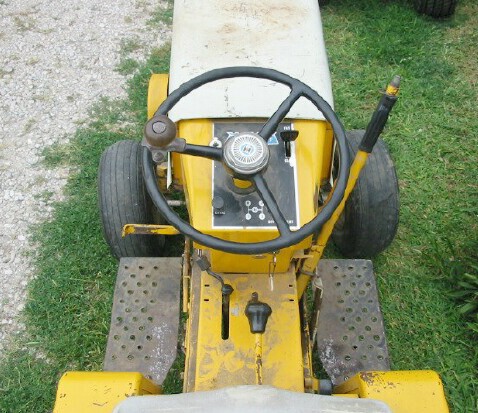 My disease started with a $50 105 that wouldn't start. Brought it home, got it started, it wouldn't move, freed up the stuck relief valves and had a little tractor. Sold it to a friend and it got dubbed "Old Smokey". We put a non-smoking 12hp in it, and it now lives happily as Oliver. That was about 9 years ago. A 147 became Amos, because now it was clear that they were going to keep coming, Amos is a good old-time "do an honest day's work" name, and the 147 was up to that -- AND we'd decided to name them in alphabetical order. Beaulah, a 149, came next- another pleasant-sounding, old fashioned name. She now resides in Nova Scotia, very near where a lot of my roots are. A 129 became "Classie". She was a classic example of any little thing that could be wrong - was. It was like she'd been set up to teach students how to trouble shoot then set out and forgotten. She lives with a friend about 2.5 miles from here and I think I've shamed him into putting her inside for the winter. "DD" was a 129 that I got from a friend named Dana - it got parted. "Enuf" was a 149 that also got parted, and at that time I thought that I HAD had enough...but then came the 149 "Fernando", an offshoot of "Why, why, why, Commando" (the little voices must be listened to). Jeanne's 125 became "Gracie", her best friend's grandaughter's name. Then a 123 from Rhode Island became "Rhoda" and her sister from Massachusetts became "Emma". Oh, and I forgot the 149 that came in (and stayed) with a headlight missing. He's "One Eye".
Good idea, Marlin. Thanx!

I've referred to the 72 as "Ole Faithful", not really a name, just the way it's ALWAYS been able to perform anything I've asked it to do. Neither of the other two Cubbies has a name. However Dad always referred to the FARMALL Super H as "Powerful Katrina" more as sarcasm since it was the smallest tractor on the farm and always struggled with a LOT of the jobs We did with it. Just no way a 30-32 Hp tractor could run with His '51 M which had most of the Goodies from the M&W catalog installed. It embarrased Our Super M-TA several times.
S

I call mine "Ole Biddy" it was something my grandfather had always said and I guess it stuck with me. Somethimes though when she's giving me trouble I call her the old B?!ch!!! Funny that two of you have named yours after my wife and daughter!!!
F

My # 1 123 Is alice, when I brought her home she was a basket case, didnt run was painted a odd green and sat on four flats.Very similar to my wifes aunt, its actually my wife that came up with the name!!

My # 2 123 is homer.My family is from Wisconsin,Where I have never lived, and all were farmers for the most part. Would of loved to know em. My great grandfather's name was homer and my dads middle name is homer.Both are faithful hard workers so the #2 got named homer as I didnt pass the name to any of my boys.
F

I always call my 128,the International cub cadet 128 model. Although, my wife just calls it "that old loud tractor"

My 1250 ended up the the name Deere Hunter. I was looking at a mouse pad that had a Deere aross the hood a Cub with the words "home from the hunt" I think it was. That and the fact it used to live in a garage full of green stuff I figred it was appropriate.
So we have Deere Hunter (name painted on the hood) Short cuts (95 electric--is tiny compared to the rest.) We haven't name 129-1 or 129-2 yet. I'll let 'em hang around the winter and see how they they do.