KRAIG - Once again, THANK-YOU for being keeper of the photos.

One comment I should add, my spikes are 1/2" round steel bar. And I have several trees with exposed roots, I've tried to be careful but I have bent one spike on the center wheel, it's bent about 60-70 degrees. Think I can straighten it, I think going to a bigger diameter bar would cure the bending but would really increase the weight needed to get penetration. With the weight shown I typically make an elongated hole 2-1/2 to 3 inches deep about 5-1/2 inches in any direction from another hole.

Here's the one I built several years ago.
Pictured in the tag along mode for travel, just flip it for actual use.
2nd pic is in the sleeve hitch mode so it can be raised for travel over walks and drives as well as backing into corners. 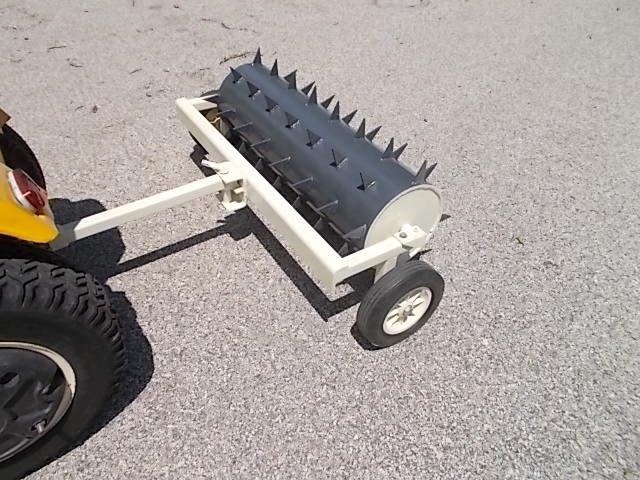 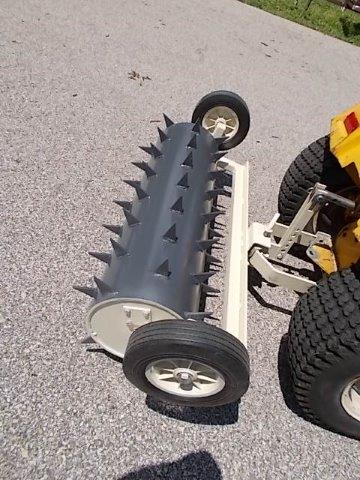 Shown also in use at our cemetery rehab project

Having a hell of a time with pictures this morning. I have several more of it being used in our cemetery re-hab project several years ago. Just the RIGHT size for that work. If I can only find them, they are on this thing somewhere!! 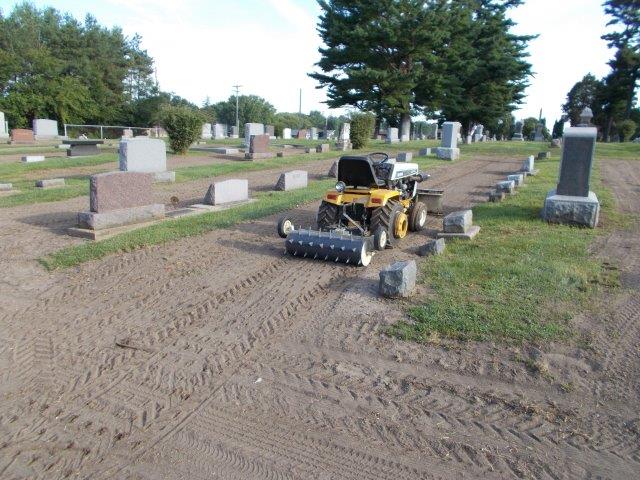 Is that tube filled with something?

Note the cover plate on the end.
It could be filled but seems to work well as is.
R

Very unique and interesting hitch system. Versatile and well thought out too!
J

Dave nice job on the aerator. Interesting cemetery layout. Will you plant grass where you are aerating ? From the photo it appears that there is minimal grass all around.

The pathways were all depressed & sunken, old cemetery.
Nightmare to mow.
We started this project a few years back and That's when I built the unit.
That area looks great now!
We ate about 1/2 way through the whole thing now, doing a section or so each year.

Nice job!
I'd like to make something similar to this but with a grass seed box for over seeding when needed.
D

MIKE - Depending on how much area your seeding I've always had the best luck with broadcast seeders. I completely cleared out old trees & bushes on two sides of our house, moved over 15,000# of dirt one afternoon, pulled the concrete base for a BIG TV satalite dish out of the ground, not as hard as it sounds, I dug a sloped ditch down along side it and pulled it our and across the yard. But I sowed 10# of grass seed in about a half hour with a hand-held broadcast spreader. It's still the best looking grass in the whole yard 10+ yrs later. I over-seeded my "back 40" of my yard about 15 yrs ago, I rented a 120# Agrifab tow behind broadcast spreader, filled it with weed & feed fertilizer, and dumped 10# of grass seed on top of the fertilizer, drove to "The Back 40" and spread fertilizer & grass seed over the area. I never thought about it till about mid-July the following summer, mowing the Back 40 with the 982 and 50C deck, I'd skipped a mowing, but realized the grass that I sowed was as tall as the frt tires on the 982, they're 18-8.50x8's, a foot and a half tall, and not very many weeds, they were crowded out. That area still nice looking turf.
I've seen "Over-seeders" like your describing, most have drop seeders, they do O-K at distributing seed where they cover the ground, but if you overlap you won't notice, but if you vary the other way, you leave a gap in the seeding, that you will notice!
Even sowing oats and grass seed on the farm as a 10 yr old kid We used an IH #5 endgate seeder. It also was really quick! Covered a 26 ft swath at 5 mph, we'd sow 40 acres in a morning, then plow in the afternoon.

I have just about 2 acres to over seed next year. The weeds in parts of my lawn are ridiculous. Its just way too much to rip up and replant. I'd like to spray it, then seed it down (over seed) in hopes it will catch good enough?
I agree with the hand spreader, it works great for newly leveled topsoil. Done that with success before. Drag a fan rake over it to cover the seed and put the water too it. Amazing how quick it starts with some starter fertilizer applied and some oats or wheat mixed in to act as cover/shade. Thick as hair on a dog in no time as long as its kept moist.
I suppose I could always attach my chain harrows to the back if I did build one in an effort to cover up the seed being dropped. I would be making a tow behind if I did make one so I could use it on any tractor or son could borrow if it did work out - his lawn is about as bad as mine.
So many ideas.....just need to find the right one.
You must log in or register to reply here.
Share:
Facebook Twitter Reddit Pinterest Tumblr WhatsApp Email Link