Help me outpull a JD

Recently, I purchased a 1650 that is very stock/original and in decent condition.
My grandson just purchased a a JD 316 with lotsa options and very heavy wheel weights.
This will surely lead to an amateur pulling contest.
What would be the most effective things I could do to the 1650 for a back to back pull? Tires? Weight?
Thanks
Skip

Don't know anything about pulling, but I would say the weight of both should be equal for starters.
D

I would STRONGLY recommend NOT hooking the two tractors together and pulling against each other. You really don't have to have anything fancy like a weight transfer sled like is used in all tractor pulls now days. In the early days of tractor pulling, and horse pulling before then, a "Stone Boat" type of sled was used. Just a sheel sheet, wood could be substituted, with hooks on both ends for hooking chains. As the tractor/horse pulls the sled along additional weight is added to the sled increasing the amount of resistance to move. In the case of tractor pulling in the 1950's & 'early '60's, men stood on each side of the pulling track 10 feet apart and stepped on the sled eventually slowing and stopping forward progress. The first tractor pull I ever saw was a garden tractor pull that used a steel sled pulling on concrete. The pull organizer was an arrogant guy, had a brand new Deere 140, Hydro, he had written the rules so the driver weight did not count on the total tractor weight, so his almost 300 pounds gave him a Huge advantage over all the 90 pound 10 year old boys who took their Dad's Cub Cadets to the pull! The lard butt made full pulls every hook. The Cubbies all still had mower decks with piles of clippings on them, turf tires which actually hook up better on pavement., AND the sled also hooks up better meaning it pulls harder.
Short and sweet, the heaviest tractor will win, a broom finished concrete surface would work best, the turf tires would hook to best, newer tires with soft rubber would hook best, rock hard 40 yr old tires not so much.
The 1650 vs 316 is probably the best matchup, the 316 is probably heavier, Deere put a lot of weight in the wrong places, but think the 316 has the K341 Kohler like the 1650, same Sundstrand 15U hydro transmission, the Deere uses a little DANA axle while the 1650 uses the CUB FARMALL rearend, both have cast iron front axle, 23-10.50x12 rear tires, 16-6.50x8 frt tires. Be PREPARED for the front ends to come off the ground, and once the fronts get so high they tend to go on over. Be careful, take video, and I hope the 1650 wins. A hint or suggestion is " He who spends the most money and thinks about it the most will win.,"

Here's some photos from Blunier's Plow Day 4 where Jim Diederichs brought his pulling sled. This should give you a better idea of what Denny is referring to. 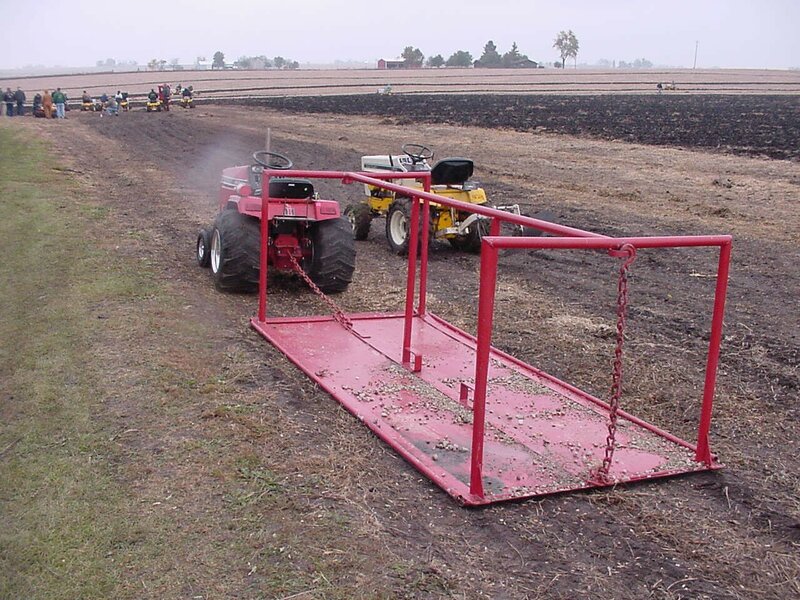 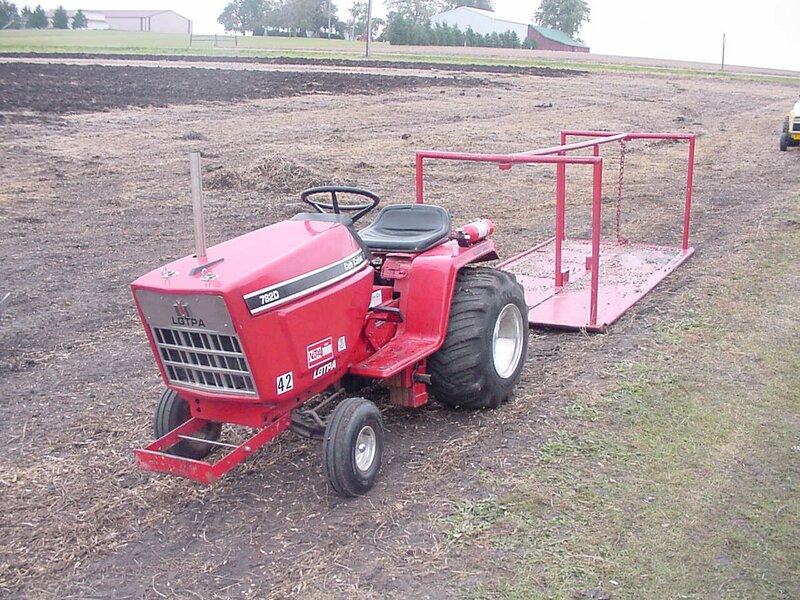 Here it is in action. From left to right, Andy Blunier, Chris Bennett is driving the Cub Cadet that's pulling. On the sled are Steve Blunier, Jim Diederichs' brother (who's name escapes me), "Big Steve" Blunier, Chris Engelking, not sure who that is standing behind Big Steve and Chris, then standing in the background on the far right is Jim Diederichs.