My apologies if this has been discussed at great lengths before but I am confused.
I just put my snow thrower on and would like to utilize the float mode so the thrower can ride on my driveway. I've done some searching but am not quite clear what needs removed and how it works. Is it like the bigger IH tractors I grew up with, where you pushed the lever all the way forward past the "resistance point"? 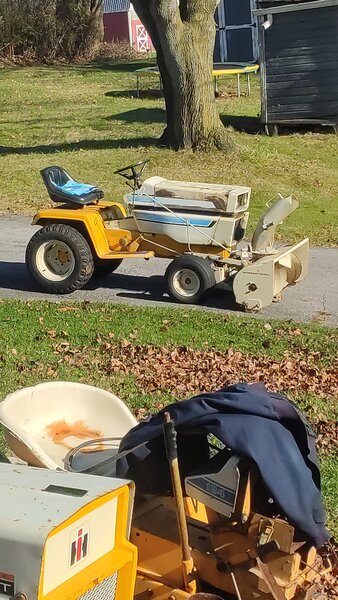 On the hydro lift Wide Frames/Quietlines there is a float lockout pin that go into the arm between the hydraulic cylinder and the rockshaft. This removes the float from the system. If that pin is out, the float works. It;s not a hydraulic float like the bigger tractors, it's a mechanical float in the linkages.

Easiest way to check, grab the lift plate by your right foot (with nothing attached) and pull it toward the fender. If it moves through most of the motion, there is no pin... if it just barely moves, the pin is in there, or it's rusted... The easiest way to get to it is through the tunnel cover.

If you had a manual lift WF/QL, it has the button in the grip area of the lift handle. You push the release button, push in the lock, and that is float.
H

Scott - he already installed the snow thrower and I doubt he wants to remove it.

You need to make sure the cam stop on the side of the frame is rotated to the full up position so the thrower can float fully up.

Review page 20 of the Operator Manual which shows the lock-out pin and how it needs to be positioned for floating operation. Hopefully you can see it in the pic. If not then I hope you have a copy of the manual. (I will say most of the time the pin is not even with the tractor. I believe it was an option you had to purchase - and in my view it was a dangerous option and required really careful use).

I didn't mean to remove the thrower. Worst case, remove the lift rod from the hole on the lift plate..... I had forgotten the height adjust knob. I normally don't have then on the tractors... I mow fairly high, and it won't even come close when I am mowing... Tilling and plowing (both dirt and snow) it's in the way too (in my opinion).. I think that both my workers knobs are sitting on the shelf in the garage.....

Also, to check the float they way I said.... make sure the lift cylinder is in the down position.......

You 2 crack me up.
I'll get to doing what you both suggest tomorrow when I have a few less barley sodas in me..