And I have good results!!

We got to the Turkey shoot kinda late, and there was only 2 rounds left. Each round had 12 guys shooting a standing target from 100' using a 12ga. with a full choke.

I shot the first round, and tried to zero in on the pattern. I told my boy where to put the bead, and my son shot the second round. He and another guy each had a pellet really close to the 'X'...the winner was too close to call so they had a shoot off. Again, they each had a pellet really close to the 'X'..this time they got a set of calipers to measure the distance from the 'X'. The holes were EXACTLY the same distance away!! Once again, a shoot off. This time my son clearly won..talk about a kid being happy!!, and a dad being really proud!

This year for Thanksgiving we will be eating a 15.6 lb turkey. And all it cost us was $8, and a really good time between father and son!

Next week is another shoot...and my son already said he wants to go back. LOL

Ok, so where's the pics of this fictious majestic bird!
B

Here is a picture of the proud winner, the gun he used, his winning target, and his turkey 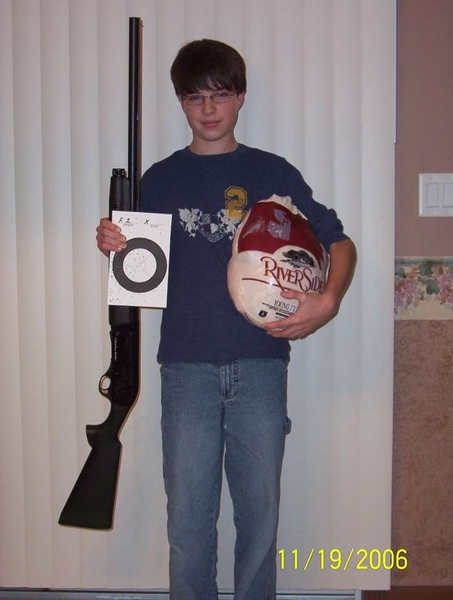 That's more like it!
I like that glimmer of You wanna match this DAD! In his eye.

We are going to shoot trap Thursday, and then hit the turkey shoot again Sunday. Hopefully I will redeem myself

Actually Brandon didn't out shoot me...I wasn't in the round he shot in. So I kinda escaped him being able to give me too much crap about winning.

But he did out shoot the 11 other guys in his round.

We'll see how tough he is this coming Sunday when instead of turkeys and hams, we are shooting for $$

We went to the turkey shoot again this week.

This time we got there early, and entered every round. I was pounding the targets...a couple of times almost blasted them clear out of the holders!

Brandon almost missed the card on his first 3 rounds

But he redeemed himself in the 12th round. Once again he won in a 'shoot off'..this time we got to bring home a really nice ham!

They are taking a week off for deer 'gun season', but will start up again in 2 weeks.
J

Wild Bill: Since you like them turkey shoots so much you'll have to come to my fire company's

Jeff: Man, that would be a road trip!

The potent Charles Daly had firing pin issues and had to be sent to KBT in PA for service. While it was gone I bought a Remington 870 Express...and have since picked up a 30" barrel and a pretty tight choke tube for it.

We have won at least 1 round every week we have shot...one of the shoots we were at, I won 3 rounds out of 6.

870= Good Gun!! Thats what i usually use but sometimes I seem to have luck with single shot lol. For the 870 i bought a super full choke and it seems to do alright. Be nice if they made a tighter one for that gun.
B

Right now I have a 'Long Handicap .041' choke tube in it. It is a tube for trap shooting. The only rules this place has for the guns is: Must use a 12 ga., and a 20ga. shell must fit into the muzzle end of the barrel.

I'm looking into a Carlson choke tube.
(http://choketube.com/index.html) I have sent them an e-mail, so hopefully those folks will be able to help me get the tightest/best patterning choke tube for the 870. On a side note...the RemChoke tubes use the same type of threads, and can be used in the Daly

Not for turkeys but a whole lota fun. Foolin with new camera and figured i'd post my biggest obsession. 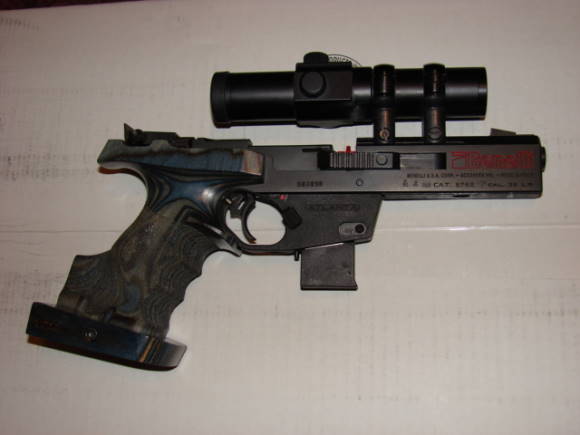