i have an original 1950 Ferguson TO 30, was thinking about converting it to 12 volt as i believe the generator isnt charging and the 2 year old 110 $ battery is shot. whats the pros and cons of installing an alternator kit

My Farmall H is converted to 12 volts. If you do it right, 12 volts is a great conversion. I see a lot of positives to it. The reason I say "do it right" is because many times I've seen it and it's a complete cobble job, wire splices everywhere and sometimes even holes in the hood to mount an alternator because it doesn't match how the generator bolted up. This is how the alternator was mounted in the same place as the generator would've been. 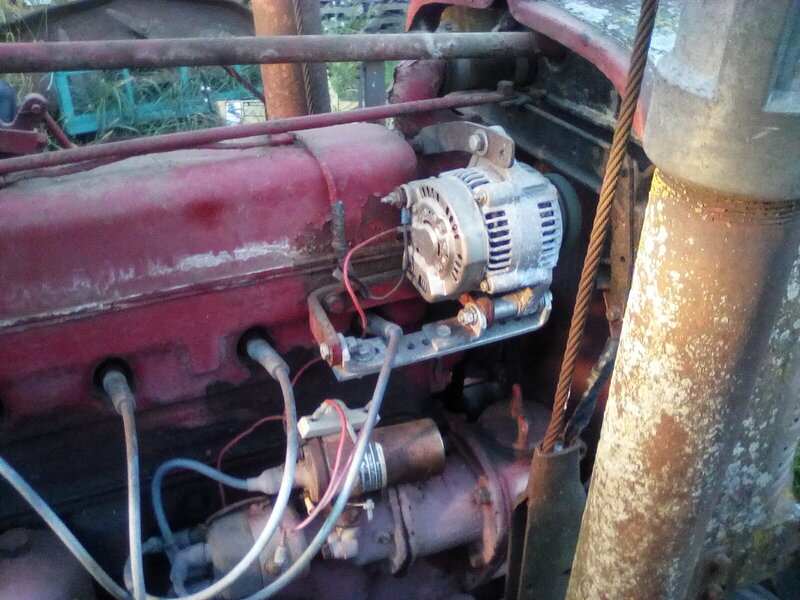 I really like what they did. The brackets are a little odd but as you can see they work really well and hold the alternator there without the need for a single hole in the hood. The only thing it interferes with at all is the one spark plug wire and that's not really a big deal. As for the wiring itself, the messiest thing I can find (which you can see in the image) is the ballast resistor zip tied to the coil. I can easily remedy this by replacing the coil with an internally resisted one.

Obviously when doing the conversion, you'll need a 12 volt coil. Probably a 12 volt starter, though the starter on my H looks like factory. Not sure that it is though, as I'm pretty sure 6 volt starters won't work very well with 12 volts. Of course you'll need to make sure to change the wiring to fit the alternator you're using.

As for pros and cons, there's a lot of pros in my opinion. 12 volts allows for much stronger engine starting as the starter will be more powerful. It should also start a lot easier in the cold, my H has been good even when starting in freezing temperatures. Lastly, as long as its wired correctly, the alternator will do a much nicer job charging the battery than the generator would, since the alternator will still charge even when idling. I have a functioning ammeter on my H and the alternator charges the battery very well.

The only big con I can see with 12 volt conversion is the simple fact that it's taking an all-original antique tractor and making it not so original, which is something I really don't care about but a lot of other people might. It may also take a while to sort out any wiring issues you find while working on it, especially since the machine is still original 71 years after it was built. I suppose finding the best parts to complete the conversion might be a con (especially if you need to locate a 12 volt starter that fits the machine).
M

And 1 other thing I didn't see mentioned would be any gauges / indicators.. you'll have to deal with the voltage supplied to each gauge.
I am not familiar with your tractor, maybe it doesn't have a fuel gauge or electric oil pressure / water temps etc. etc... , but it may be a consideration you'll have to ponder.

i was told that all i need is the kit. brackets and resister for the coil and everything else besides the lights will handle the 12 volts,

I'm not sure I would trust the lights to handle 12 volts. The lights on my H are not the ones that would have been on it from the factory.

yes gonna unhook lights b4 try starting it, getting a .50-.60 resister tomorrow for the coil. i think it has a 12 volt coil on it anyway. lol

JPrattico said:
The only thing it interferes with at all is the one spark plug wire and that's not really a big deal. As for the wiring itself, the messiest thing I can find (which you can see in the image) is the ballast resistor zip tied to the coil. I can easily remedy this by replacing the coil with an internally resisted one.
Click to expand...

I'd mount that ballast resistor to the underside of the alternator bracket for a cleaner job. bye bye tie wrap
T

Actually the 6 volt starters handle the 12 volts better than they handled the 6 volts, the six volt starters actually had heavier windings. I converted a lot of VA Case tractors and Super Cs always worked great.
G

You can get a 6V alternator here: Our Alternators | Fifth Avenue

Regardless of what you've been advised, 6V lights don't last as long on 12V BTDT

I have converted from 6V to 12 on a few things. 6V starter should work just fine. Easiest alternator to adapt is a Delco 10Si, 1 wire (self exciting voltage regulator) built internal to alternator. Lights will have to be upgraded. Then other things like coil & possibly any electric gauges

No reason not to upgrade to LED lights when switching from 6V to 12V. Much more light for less current draw.

That is a good point. Something I probably would have considered if the lights on my H didn't already work. And I guess I did forget about electronic gauges, not sure if this machine would have any but my H doesn't have any (other than the ammeter).

i got an amp gauge, a water temp, and an oil pressure but that shouldnt have a problem ?
M

cubs4lifeofme said:
i got an amp gauge, a water temp, and an oil pressure but that shouldnt have a problem ?
Click to expand...

Oil pressure on a 1950's tractor should be mechanical, not electric. If there is a bulb in it, replace the bulb.

Water temp gauge probably is not electrical at that time period either, but if it is, adding a resistance probably will make the temperature readings inaccurate, since the electrical ones are expecting a certain supplied voltage and the sender resistance varies with pressure. I'd have to think some more about whether putting a series resistance in there would actually work or just make the readings erroneous.
G

Going on memory but on the neighbor's, the only "electrical" gauge was an ammeter. The OP was mechanical connected to an oil port and the Temp gauge was vapor tension with a braided tubing and bulb that went to a fitting on the block. It seems you have a "deluxe" layout.

I most definitely did not think much about gauges. Most tractors of this era have mechanical gauges. On my H, the oil pressure is mechanical (directly from the oil system of the engine in fact) and the temp gauge "sensor" attaches directly inside the block and runs directly to the gauge with a braided wire. The only electrical gauge is the ammeter, which I think would work the same regardless of 6 or 12 volts, though I cannot be sure as mine is not original to the tractor.
G

It's actually a capillary tube and the bulb filled with a type of alcohol. I've seen them ruined by over bending or kinking. One guy on a truck forum thought he could un-braze the gauge to move it. (lazy I guess). His description of the result was a 10 inch blow torch that almost set the back of the dash on fire.