I didn't even put the whole herd out front in the yard this 4th like I usually do!.
Just too dam hot to mess with it this year!!
H

Hahaha - Mike F made a good point. Back in the day of the old Forum BTGC (before the great crash, which Kraig knows well) there was a Great Oil Debate (it might even be in the archives). The one thing I remember from that is what one of the members mentioned a quote he learned from an old timer "oil is oil, and some is better than none".
On the other hand, for me in a K-series single cylinder I prefer the straight 30W. That is unless it's gonna be below 20degrees for a sustained period outside then I switch to 5W-20 (as the manual specifies).
S 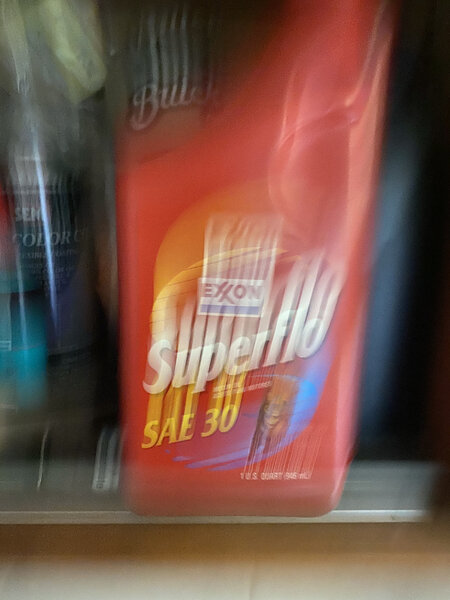 I have a case of sae 30 Exxon non detergent
S

With my Air Cooled engines that run a long time, I have no problem running single weight diesel oil in them. They don't have as many detergents as oil for gas engines but air cooled engines can run hot so diesel oil is happier in that environment.
G

No 30wt in Utah? Napa, Carquest (especially in farm country) carry it as well as Case IH.

It's best to go with what the OEM recommends. Kohler seems to "tolerate" multi-weight in their service/repair manuals for K series but the caveat can be increased consumption and carbon build up according to them.

While many have gone the multi-weight route, air cooled engines run looser until warmed up and some such as Kawasaki recommend a brief warm up period before a load is applied and I think it's related to lube viscosity vs clearance.

Since the K series have no filters, the 25 hour change interval will keep dirt and abrasives to a minimum for longer life. Add to that detergents will keep the case and parts cleaner. Their job not only keeps deposits from building but also suspension agents in the oil will help get the dirt out at draining rather than piling up on the crankcase bottom. That alone is why I stick with dino lube. A busy season can rack up hours pretty quick and good dino ain't cheap but still less than synthetic.
J

mgonitzke said:
If you want to know what oil and change interval is acceptable, read the owner's or service manual for the engine.

Straight 30W is what belongs in a K-series in warm weather, but....don't run that in a Command. What is appropriate for one engine may not be for another. OP did not specify what engine/tractor he has.
Click to expand...

Stevenovick1 said:
I have a case of sae 30 Exxon non detergent
Click to expand...

Steven - I definitely would NOT be using non-detergent in a Kohler K series. I believe Greg R makes a good case for why. Keep that ND stuff for your cars from the 30s/40s.
G

Hey that ND Exxon 30 might be good for vintage 2 cycle pre-mid sixties.
S

Harry I thought non detergent was for the K series . So the valves would not carbon up
S

My Bad. I meant Low Ash . Harry It’s not a non detergent
H

No single wt DINO oil by me either, even the multi grades have gone with some synthetics (Castro GTX for one) that's why I investigated the diesel single weight, that, we have.

When I rebuild a k series I put the straight 30 wt in it, after 3 or 4 hours of run time I change it and get all the break in lube and assembly dirt out put fresh oil in and do the normal recommended oil changes,worked for me for 40+ years ! I also re torque the head about 3 times ,but that's just me !

You guys mean not everyone is stating facts just opinions,really???
G

You guys mean not everyone is stating facts just opinions,really???
Click to expand...