After nearly 10.5 years and 6,580 posts, a lot of us know Don Tanner. Right now he could use some encouragement so if anyone would like to send him a "Thinking of You" card of some sort his address is Donald Tanner, 54 Old Trunk 3, Hebbs Cross, Nova Scotia, Canada, B4V 0Z4.

Frank, fearing the worst, I was afraid to open this thread!

Glad it wasn't what I feared. Good idea.

I second Kraig's sentiment. Thanks for posting the notice, Frank.
H

Frank - I 3rd Kraig's sentiment (Jeremiah was 2nd). I'll get something in the mail to Don (he probably calls it the "post" like they do in England - in fact, he's probably actually located closer to England than I am to Nova Scotia) Hope I can cheer him up a bit
F

For the record, I just got off the phone with Dawn. Don's still putting up the good fight. Their friend, Jamie, has the turbo installed on the 1512D and says it would have to try to tow the pickup around to kick in. He said the pictures posted here will be a great help when he gets to installing the power steering. An email from CCSpecialties says something is going over there

Dawn said she'd update me (us) with any changes.

Frank C. Thank You for Don T.'s update. We're keeping Don and his family in daily thoughts and prayers.
E

Don's in my prayers here. His posts would be missed by this youngster. 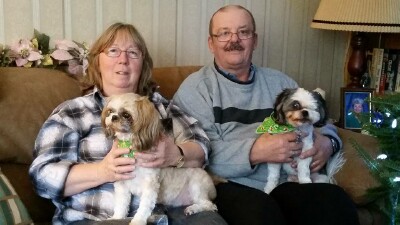 Dang.
Condolences to his family and friends.
W

This is sad news. Sending my condolences to his family and friends.

Frank, thanks for letting us know. Condolences to his family.

My condolences to Dawn and Family,

Don was one of the guys that I would read every post of..

Frank- Thanks for the updates. While this isn't good news to report, we do appreciate you keeping us posted.

Our prayers are with Don's family.

Don was special.... When Sandy passed away in 2010, Don was one of you guys that sent words to urge me onward. We have all lost a good friend. The forum has not been the same without his adventures. Condolences to his family and to you Frank, I know he was a special friend.

I can only echo what many have already said.. Don was such a special member of this fraternity! Being on the east coast we could/would chat on the side about the weather and such..

He was always encouraging me and many others to keep our tractors usable and working.

He will be sorely missed.

Frank C. Thank You. Donald T. will be very much missed by all of us. He was always quick to help anyone. We shall continue to keep his family in our thoughts and prayers.
W

Don T. and I had a special e-friendship. Back on May 10, 2010 we discovered we had the exact same birthday...month, day, and year. That was on a Monday and our BDs were on the previous day, Sunday, May 9th. I think it was also a Mothers Day. Since then we have spent literally hours on the phone talking mainly cub talk. I got a call from Frank this morning to inform me of his passing. I was aware of the inevitable but the news still shocked me. I haven't been able to think of anything else much all day.

I did a search and read some past posts. I had to to find out exactly when it was we made the discovery. Frank and I talked this am about Don and what he had given to this forum. Don knew a lot and if he was cloudy in any area he would stay with it until he knew it and knew it well. I remember one time when he posted a pic of a bucket of hydro pump parts he was going through. He actually gave me the guts to tackle one myself and in the end we both knew them inside and out fairly well. At least the intimidation was a thing of the past for us both. As time went on I spent more time talking to Don. I think our record was 2 hrs 15 minutes. We often made fun of each others different accents and I got a kick out of the way he would end most sentences with "right?". Throughout the day today I kept remembering his many different cub encounters. He had that 129 with a loader that ended up costing him literally thousands of dollars. It appeared to have several hundred pounds on the rear. He went first class and installed upgraded hubs on the front yet still bitched about how badly he needed power steering. I then remembered the yard trailer he installed hydraulic lift on and how well it turned out. He had a great workshop too with a heated floor and actually bragged a little on that subject. Don was a proud person and deservingly so. He loved his Dodge truck, his large camper, and his motorcycles as well as many other things he had going in his life.

I emailed Don on our birthday this year and he did respond two days later. He simply said he would get back with me when he felt up to it. That day never came. I really wanted to have one more phone conversation with him but I knew how sick he must have been. I sent a couple more emails and a snail mail letter to Don and Dawn but never got any response until today. Dawn wrote me to inform me of his passing. That lady has been through a hell of her own and Don was so lucky to have her.

Oh, Don and Charlie had a way of getting under each others skin (in a sort of funny fashion) so that was a little extra forum entertainment. It was all in fun over parts and service.

Don and Dawn were planning a trip to the states this summer which was to include a visit to me here in NC. His main concern was if I had room for him to turn his rig around. He was going to bring a brand of beer we don't have here and he also stated he planned to turn some wrenches while here. That would have been wonderful for sure. The best part was I would get a chance to meet him and Dawn in person.

I've never been much of a praying man, not athiest necessarily, just never had the results most say they have had so I stopped. I have been hoping for the best for Don on a daily basis. Actually, I have been hoping for a miracle yet it never came. Now Dawn is in my thoughts and I will keep hoping the best for her. She will have it tough for a while but I'm certain she will come out stronger as a result.

R.I.P. my friend. 64 is way too young but who knows, perhaps we will get that chance at meeting some day, some how. Your humor and knowledge will be missed by so many.

Donald Warden - It is with great love and sadness, that we announce the peaceful passing of Donnie at home in Hebbs Cross on June 27th 2016. Born on May 9th 1952 in Bridgewater, N.S., he was the son of Florence Langille, Wileville and the late Levenis Tanner. He is survived by his loving wife Dawn (Stewart) of 40 years; son, Kevin (Nicole) Winnipeg, M.B.; daughter Vicki, Bridgewater; sisters, Irene West, Northfield, Brenda (Leslie), Middle Cornwall and brother Peter (Christine), West Northfield; special friend Kathleen Veinot, New Germany; and many nieces and nephews. He will be greatly missed by his fur babies, Sophie, Sarah and Lilly. Donnie was a member of the former Bridgewater Jaycee Club, The Royal Canadian Legion Bridgewater Branch 24, a lifetime member of the Bridgewater Lions Club, a volunteer with the Bull Run Trail Association. He first started working on fishing draggers in the early seventies, then employed by South Shore Regional School Board cleaning Hebbville Elementary School and his last piece of employment was Reinforced Plastic Systems Inc. in Mahone Bay, N.S. Donnie was an avid motorcyclist and collector of older Cub Cadet garden tractors. He enjoyed camping with his wife Dawn and his fur babies, where he met many new friends. He will be deeply missed by his motorcycle and Cub Cadet friends, family and all who knew him. Visitation 7-9 PM Wednesday, July 6, 2016 in R. A. Corkum Funeral Home, Wileville. A Celebration of Life will be held 2-4PM, Saturday, July 9th at Hebbs Cross Fire Hall, Hebbs Cross. In lieu of flowers donations can be made to Red Cross, SPCA, and the Bull Run Trail Association. Arrangements have been entrusted to R. A. Corkum Funeral Home, Wileville, where on-line condolences may be made by visiting www.corkumfuneralhome.ca

What did Donnie always say, "Two Steps Forward, Four Steps Back?" or something of the sort. Loved to hear of his escapades with Cub Cadets, Loaders, and Heated Shop Floors, Carburetors, Voltage Regulators, Zero Turn Mowers and steep hills, 125s, 1512s, 450 Blowers, to name a few (and I'm sure Dawn could name many more!).

Thanks for posting the information, Frank.

But I'll wager his spirit will stalk this forum for a long time.