Hi i've owned a dayton lawn tractor for several years now and was wondering if anyone else has ever come by one... for an MTD there built very well, though mine is from the earily 70's... there no way up to cubbie standards, but good for a lawn tractor! 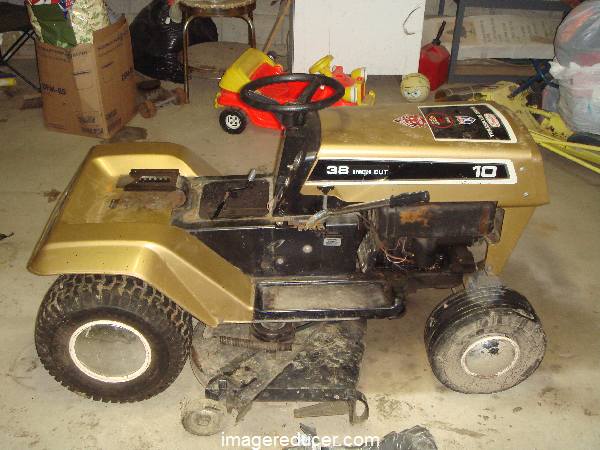 It's partially torn appart in this pic but u get it

so no ones ever heard of these?

Matt S: MTD made those for 25-30 or so different retail chains differing only in the name/decals and paint scheme. I once owned a persimmon colored "Longlife" branded 38" Lawn Tractor made by MTD for the regional OTASCO Auto & Home chain. Dayton, I believe is a chain of midwest department stores, therefore the name... It's just an MTD...

mstetar said:
so no ones ever heard of these?View attachment 22303
Click to expand...

We have one not in good shape

Welcome to the forum Mary! You can introduce yourself in the introduction thread, and post what cubs you have.

I have 5 of these Tractors. Two 16 hp. hydro's, an 8 hp. gear drive, which is actually a lawn mower not a GT because it has small rear wheels, a 12 hp. gear drive and a 16 hp. gear drive that was my pulling tractor. The gear drives have the peerless transmission like the 580 cub has. One is a Dayton and the other 4 are known as Turf Trac which was sold by the Southern States Corp. All made by MTD and yes they are tough. I still use 1 every so often to cut grass and spray with. Both hydro's had a lever for forward and reverse that I switched over to a foot pedal. They have very large tires and wheels on the back. Not sure of the size right this minute. They had hydraulic lift for the deck and a true 3 point hitch for implements. 50" decks which to this day are solid as a rock. Made in the 70's. I have a manual for the 12 hp. All the models I have use a driveshaft to drive the mower decks. Sorry no pics. I also have 34 cubs and I use my 1650 and a 1620 lawnmower to do most of my yard work but the Turf Trac's can hang in there with the best of them.

M
Hello all, I'm Mark; new to the forum not new to the Cub 2182s (owned 5 have 2 still), have lots of knowledge and always are willing to help others.