Here's a PDF of the wiring diagram and description for making a relay-logic self-starting Rotary Phase Converter. Feel free to ask questions! 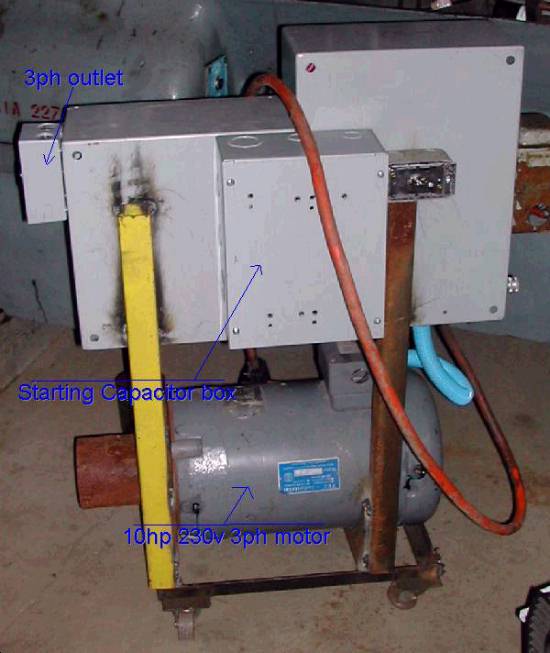 And internal componentry... (see schematic for information on the components) 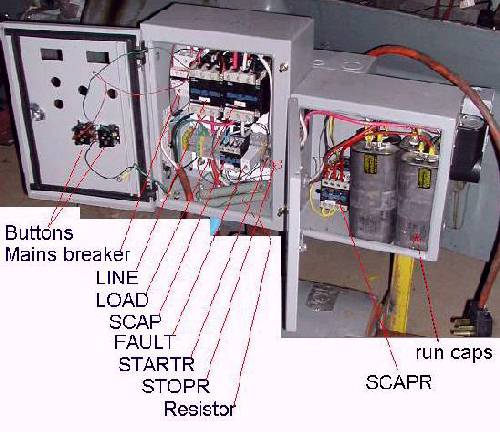 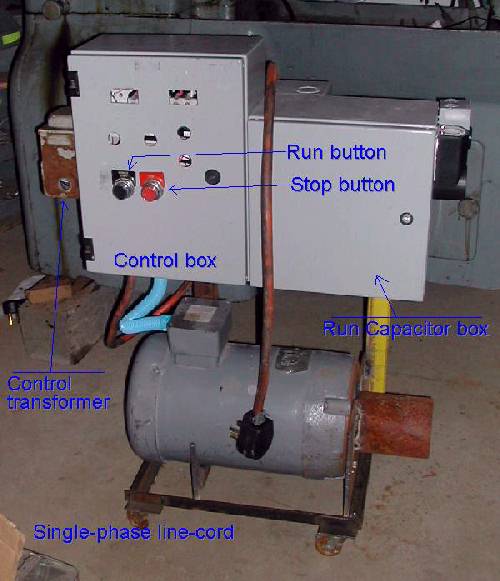 Nice setup!! Thanks for posting the PDF files also. I already have a simple 5hp converter built but need to upgrade it. Never though of putting it on wheels though, duh on my part.
D

Well, mine was that was partly due to convenience, other part to necessity. the base you see there... was originally made for my Lincoln 225A AC buzz-box... which I moved to a larger rolling-workbench with steel top. Had the base still, and it was perfect for humpin' that 10hp motor around... (it's about 120lbs!). I made a support cradle for one end, and a retaining plate for the C-face, welded a piece of 3" diam. tube over the end to cover the shaft (and keep it from wrappin' up a pantleg), and called it the bottom half. It was so stable, I put the back-arms on it, and mounted the control boxes to the arms...

Now, if I need to move it around the shop, or relocate it to another shop (to test out some 3-phase equipment), what I do is load it into the bucket of my loader, drive up onto a trailer, and tow the whole works to new location with my big Wagoneer- the one with the big Onan generator in it. I plug the RPC into the Onan, fire it all up, and plug the machine-under-test into the RPC and flip the switch- mobile test tool in the event that there's a piece of machinery for sale somewhere... I can try, before I buy!
J

Dave, Excellent drawings, thanks. I will be putting mine together as soon as I find some caps. What sw do you use?
D

SW? Software? Don't laugh- I drew that with CorelDraw 5.0, using a Toshiba laptop... P-class processor running around 400mhz, 128mb RAM, running Windows 95. Amazing how fast that old software is on an old-enough-to-be-hienously-obsolete machine can actually be. Always upgrade hardware, and downgrade software!
J

Where did you get 430 vac start caps? My search didn't find any in the major brands. CDE and Mallory only list up to 330 vac in their spec sheets. The other various rotary converter discussions show less of a rating. Is 430/440 just for an extra comfort level or are there serious transients to worry about? TIA
K

Jim the caps wont hold anymore voltage than what is fed to them , just because they are rated higher does not mean they will be putting out that voltage. Always use bigger voltage caps than is needed to handle any spikes and to be safe - the Farads or division there of is the main thing next to not be under voltage rated. Under rated capacity wont filter / store enough and under rated voltage explodes ! So does mixing DC and AC caps on the wrong supply.
J

Ken, In this app they essentially pass AC current with a phase shift, they do not store like a filter cap would be doing. All I want is a v rating that will not break down when starting the converter. There are a lot of run caps rated for 440 but they are of a different construction because they are always in-circuit but are of a lower mfd than the ones listed as start caps. I can always parallel a bank of them to get the mfd I need for the start cap, if I need the higher vac rating for safety. Based on the line voltage alone, a 440 rating gives a 100% margin, a 330 rating gives a 50% one.
D

Jim- I got my start and run caps from surplus center (www.surpluscenter.com). They've got listings for Motor Run AND Motor Start caps... I think my array consists of three 40's in parallel for A-B, and two 40's in parallel for B-C. Starting cap array is somewhere around 5 or 6 (don't remember). For the motor runs, I had the option of using smaller form-factor caps at lower working voltages, but opted instead to go for the larger units. These Motor Run caps are take-outs, and they're used... some are a tad leaky, dented, etc, but work fine, and are non-PCB. They're also CHEAP. Get a few extra... and a few different sizes, so you can tweak the levels. It's also a good idea to have two voltmeters (one for A-B, the other B-C, for balancing).

I prefer to use voltage ratings for both start and run caps which exceed the system voltage by at least 25%... that's just a preference I've gotten from building Ham Radio equipment. Many say that oil-filled Run capacitors (being rated in 'working volts') are much more tolerant to over-zings, but I prefer not to ride the edge of ANY ratings. Motor start caps are of the electrolytic type, so 'ya really gotta heed the voltage ratings... they take a helluva beating for a short period of time.

There's three types of transients that'll appear in an RPC arrangement like mine that could cause a voltage excursion risking the caps:

1) Contactor coils... when you cut off the coils, they generate a nasty zap... {around 1kv) due to the collapsing field... suppressors take care of that, for the most part.

3) Load machinery. Unpredictable, but with the LOAD contactor dropping out, it does grant some peace of mind.

In my design here, everything is very ooops-tolerant... I'm pretty conservative about ratings 'cause I hate fixing my own creations later!

BTW- one thing I didn't note-

My voltages right now are within 8% of LINE... but that wasn't the case while I was testing- it varied by quite a bit... think I saw into the 290's in some severe imbalances... so leaving that extra margin gives you fudge-room in the mad-scientist process of balancing stuff.

And while you're balancing, respect those capacitors- my start cap bank stores enough of that last cycle (before switchout) to blow the end of a #2 Phillips to a totally worthless shape...! Always put a resistor across that start-cap bank so they discharge... 5K and up is fine... higher resistances will extend the discharge time... be careful!
J

Ah yes, test for charge with a screwdriver (when you're unscrewing a lead). Thanks for the tip. I had checked the surpluscenter site and that was why I asked about the ratings, they have only up to 330 vac for start caps. So is that what you used or did their stock run out?
D

Yeah, your'e right- I used these:

They're only 330v... fortunately, my top-end voltage came out to 250v, and only for a few seconds, so I was under it... and once the contactor is out, there's no zings that'll get it.
BTW... contactor-coil zings can't get to the cap bank because of how my circuit is isolated... only motor zings, so the start caps are 'probably' gonna survive okay... 330v units are, by the way, intended for motor starting at 240v- if one dies on me, I'll let 'ya know. I may have smoked one already, but won't know 'till after I get some of this other wiring done, and the shop warms up a bit more. Below 40F, the motor's grease gets so thick that it doesn't like self-starting (blows the 40A wall breaker!) :-\
J

John,
It's been a long time for me also but I think you're thinking about a DC cap used in a rectifier circuit where it would charge to peak if there were no load. I think caps rated for AC are spec'd in rms. Dave?
J

Yep, I'm sure your right Jim. If the cap is rated for AC then that would be it's working voltage.
The ripple on DC is what I was thinking about.
Man, I'm getting old.