Working on a 1000 that has a walbro carb on it. Starts fine, and runs fine until the front pto is engaged. Then the governor kicks in and gas starts spraying out of the carb. It acts like the gas flow increases, bogging the motor.
Anybody have this problem?

Never dealt with a walbro before. Am I correct that the top screw is the low idle adjustment, and the bottom screw is the high idle?
Here is a pic with blue pointers at both screws: 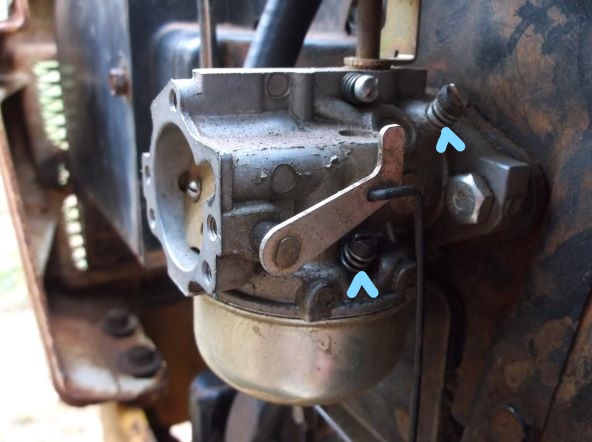 Pitch it and get a carter.

If it were mine I would. I am working on this for someone else, and I have already spent over $400 in parts for it. I am trying to get it running ok so I can get it back to them without spending a fortune.

Is the air filter off when it sprays?
B

Not to throw a wrench in the works but try a different condenser. I say this because I usually have a couple of extras on the bench.

You are correct on what adjustment screw is what. I'd replace the condenser first though...

Air filter on or off, the carb still sprays.
Educate me, as to why the condenser could be the problem. I would be tickled if the condenser were the only issue!

What do you mean by "the carb sprays"?

Maybe the exhaust valve is sticking a bit on the compression stroke or it is bad like not sealing properly.
Haven you had the head off, or the breather to check for proper valve clearance and operation?
How many hours are on this unit!!

A fine spray comes out of the carb intake when I engage the pto for the mowing deck, and the engine bogs down like it is flooding. It appears to flood when the governor kicks in.
It runs fine just sitting. Drove it around a little, and it runs fine. Engage the deck, and it bogs down and sprays.

I have not had the head off, since that would create another cost increase along with more hours of labor. The hour meter lens is messed up, so I do not know how many hours are on it.
I have already spent 30+ hours working on it, along with a parts cost of $481.97. I even used as many good used parts as possible, to keep the cost to a minimum. I am ready to be finished with this project.
It started out as an "I can get it running for you" statement for a friend. It's turning into a many hours, and lots of money nightmare!
B

The condenser will make you think that there is reversion in the intake port by messing with the timing. My bf onan was doing that as was the Kohler on a 314. Makes you think that you have spark knock and being really late at the same time .

Did you have the linkage off while doing other work? It sounds like some spring or linkage is assembled wrong. A little governor engagement is pushing the carb butterfly too much

If it was the condenser, why wouldn't it spray all the time? I'll try another condenser anyway, nothing to lose but time.
The linkage is ok. I have a pic of the linkage in the service manual.
B

It has to do with the load on the coil. Run it long enough and it gets worse rather than better.