The volt meter on my CC 149 has deflected several volts to the discharge (negative or left) side since I purchased the tractor used 20+ years ago. It hasn't made any difference in the tractor's operation. Recently the battery has been discharging during operation. Since the battery was about 5 years old, I replaced it. The new battery discharged during a recent 4 hour operating time job. Thankfully I stopped it next to the truck so jumping the battery wasn't a problem. I made some checks on-line and started with checking connections to ensure they were clean and tight. Disassembled the voltage regulator, inspected and cleaned contacts, ensured they were operational, etc. Also removed the volt meter and checked wiring against the wiring diagram in Charlie's FAQs. All seemed ok.
Removed wires from solenoid, cleaned, reinstalled. Wiring on solenoid matched up with wiring diagram.
The battery shows about 12.65 volts at battery posts with a digital volt meter when tractor is running. When starting the tractor, the voltage drops from about 12.5 volts to about 10.5 volts.
Question #1: Any ideas on the volt meter deflecting to the negative while engine is running?
Question #2: Any thoughts on the recent issue with the battery discharging while tractor is in operation?
Thanks.
K

A fully charged battery should put out about 13.2 volts at the posts.. Also discharge during cranking for what you are looking for does not mean much.. What does matter is how the battery recovers after starting and the charging system is operating.. Check battery charging in the FAQs and it should tell you what you need..You will find it under how to test my starter generator..You will need a hand held voltmeter to do this..
Last edited: Sep 12, 2021

Unless someone has modified the wiring on your tractor, it has an ammeter, not a voltmeter.

kphill said:
A fully charged battery should put out about 13.2 volts at the posts.. Also discharge during cranking for what you are looking for does not mean much.. What does matter is how the battery recovers after starting and the charging system is operating.. Check battery charging in the FAQs and it should tell you what you need..You will find it under how to test my starter generator..You will need a hand held voltmeter to do this..
Click to expand...

dgeary said:
The charging system should be putting out a minimum of 13.2 volts, ideally the range should be between 13.6 to 14.2. Fully charged batteries should show 12.6 volts or above. 12.1 to 12.4 is partially discharged.
Click to expand...

Also I would check that charging system with a volt meter at the generator as the amp meter on the dash may be suspect and may not be working right either.. He may have two problems but the charging needs verified first..
G

One thing I've found is the generator and/or alternator is very speed dependent. I thought I had the same problem on my 1650. It would barely charge at just above idle for putz'in around the fields. Above 2,000 RPM it would charge but if the headlights were on, it was at 0 or dip on the "D" side. At rated RPM everything worked fine i.e. clutch, ignition, charging, and lights.
K

Yes, these little tractors are designed to be run at WOT (wide open throttle) as this gives them enough speed to produce their rated horsepower but also gives the mower deck blade speed enough lift to give a nice cut and also enough engine rpm to allow the generator to spin fast enough to produce the power needed..Let the engine warm up for a couple minutes and slowly open the throttle until it is all the way open..
D

kphill said:
A battery puts out 2.2 volts per cell at full charge.. 2.2 x 6 = 13.2.. a 6 volt is actually 6.6 and a 24 system uses two 12 volt batteries connected in series that produces 26.4 total when fully charged.. But you are right the charging system produces more than 13.2 because of wire resistance and other reasons..
Click to expand...

Fully charged battery is approximately 2.1 volts per cell. A battery needs more 2.15 volts per cell to charge. Below is a quick reference chart from a major battery manufacturer for charge condition using both voltage and specific gravity. 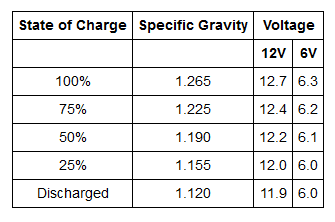 So we have a .1% differance.. that is not going to keep the tractor from not charging and that is the point of this post.. Either he has a problem with charging or the generator is not turning fast enough to produce power.. I would check that first and if it is charging, check the ammeter connections to make shure they are clean.. I have seen these gauges go bad as well...
Last edited: Sep 14, 2021
W

Ran the following checks/tests. Some from FAQ, some from folks on this site, some from small tractors site. Thanks to all for your input, but still I'm still working through this issue.

^ Grounded SG (F) terminal with engine running >1/2 throttle. Ammeter did not move from discharge state and no change in voltage across battery terminals (~12 volts).

^ Measured voltage at SG (A) terminal with engine running >1/2 throttle. Measured 8 volts and decreased to ~ 2 volts.

^ Removed SG and measured resistance between SG (F) and (A). Measured ~8 ohms.

^ Disassembled, cleaned, and inspected SG. Brushes ok, not hanging up. No evidence of overheating.

^ SG rotates CCW when viewed from front of machine.

Have you polarized the voltage regulator?

RayF said:
Have you polarized the voltage regulator?
Click to expand...

There is no need to do this. It does this by itself every time you start the tractor.
W

No, I did not polarize the generator. I had thought about it after reading on some other sites, but searched it on this site and the consensus was as Matt G. commented, polarization takes place every time the machine is started.
W

Here's the Paul Harvey: I contacted a local long time CC dealer (Covered Wagon in Sybertsville, PA) and asked to whom they farmed out their SG work. Took the SG to this guy who pulled it apart and put the armature on his growler. It immediately showed bad. He's in the process of trying to track down a replacement armature. He called last night and said he's still looking but they're a little harder to find than he anticipated. Interesting SG work shop. No advertising to even let folks know there's a business there, but it appeared that he had plenty of work.

Look for a good used unit, probably will be cheaper.

Help, I've fallen and can't get it right