I need some help from you experienced Cub Cadet folks. I need to replace the engine on my 72, and all has gone well until I attempted to remove the pto (mower drive) clutch from the old engine. There are 2 hex head set screws accessed through holes in the "star plate". One came out easily, but the other is obstructed by the end of one of the screws coming from the front of the clutch, and its nut. I attempted to back out the screw but the nut just spins and there is no way that I know of to get ahold of the nut. So how do you get the clutch off the engine when you cannot get the set screws out, hopefully without destroying it?
Thanks in advance.
Charles Anderson [email protected]

First off, WELCOME! There should be three sets of two setscrews, six total, holding the PTO onto the bearing. The outer setscrews are standard setscrews, the inner screws are cone point setscrews. You need to remove these six setscrews to remove the PTO. Then there are tow setscrews holding the bearing onto the crankshaft. Sometimes the three holes into the PTO housing are filled up by mud daubers making them not as obvious. Here's a drawing from the service manual showing the PTO details. Once you locate the three setscrew holes spray some penetrating oil in and let it soak for a while, then spray again. I like to let it set over night. Then use a hex (Allen) wrench with a good tip make sure that it's not rounded over or you'll risk ruining the setscrews. Tap then wrench in to make sure you have a good grip then lightly tap the wrench as you turn it (think mini impact wrench). Repeat on all six setscrews. Once you have the setscrews out then you can pull off the PTO. This can sometimes be a tough job as well. 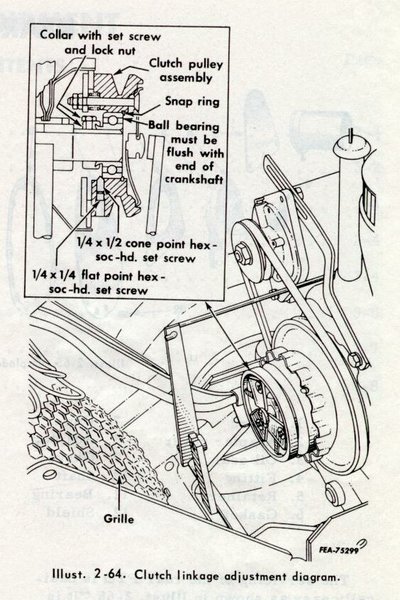 Thanks much for your response and help. However, I am still have a question about accessing the set screws in the pto clutch that you mentioned. The yellow star wheel that holds the fingers on the clutch disk overhangs the set screws so that I cannot get to them. Is there a way to force back the star wheel, or is commonly done just to bend it out of the way. If I can get the star wheel out of the way then hopefully I can get the six set screws out.
This is why is did not initially attempt to remove the three set screws in the pto pulley in the first place, I call these the front set screws. There is another set of two accessed through holes in the star wheel, I call these the rear set screws, which are the ones that I was unable to get out previously.
Again I thank you in advance for your help.
Charles Anderson Hickory at mywkt.net

If you press the center button in it will release the PTO clutch and you will be able to turn the PTO body to align the setscrew holes with the cut out in the "star" on the pulley. If the engine is in the tractor with the PTO disengaged you should be able to turn the PTO body separate from the star disc to align it with the holes. If you have the engine out then you might be able to press it in by hand or use a three jaw puller like this to press the center button in: 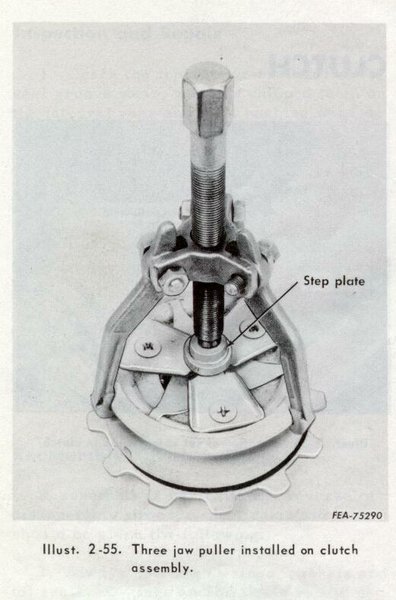 Thanks again for your help. It is rather busy around here in the summer, but I finally got back to my model 72. Following your instructions I got the PTO clutch itself off the crankshaft. Still left on the cranlshaft is the PTO bearing and the generator pulley. I removed 2 setscrews from the pulley hub and another one from the bearing race assembly, but the pulley and bearing assembly will not budge. What is the bast way to get these off the crankshaft without damaging them beyond usability. The pulley looks to be just a steel stamping which looks to me to be unable to withstand serious hammering or prying. Thanks again for sharing your experience.
E

After the setscrews are out of the bearing you have to turn the collar slightly ( I can't remember which way, it's been a long time since I've done one of these) to release the bearing from the shaft. The bearing and collar are eccentric and lock on the shaft when turned. There is a hole in the collar for a spanner wrench but if you don't have one you can use a punch and tap in the hole to turn the collar. It only has to turn maybe 1/4 turn and it will come loose from the bearing and then the bearing should slide off the shaft unless it's rusted. Then you may need a puller. The basket pulley ( the common name for it) should pull off the shaft but is probably rusted on. Be careful, it's easy to bend it up and make it unusable. Penetrating oil and patience and maybe a little heat should get it off. Polish up the shaft before you try and get the pulley off. Good luck.

Go to the "Refurbish and restorations thread" and click on "Finally doing a 100". Go to page 1 and scroll down to Feb. 5 post. This will go along with what Ed is saying, along with some pics. Hope this helps.

Look in the tools section of cc specialties above. He has a special tool to pull the basket pulley without damaging it. If you don't want to wait for it, you can do something similar, make a sleeve that will just fit over the shaft, drill two holes for the setscrew holes, and use a puller on it. Much clumsier than his tool, but it can work. If you are going to be doing more than one . . . get the tool!
You must log in or register to reply here.
Share:
Facebook Twitter Reddit Pinterest Tumblr WhatsApp Email Link