Mike P., before you order another regulator, check the ground wire that goes to the regulator, it controls everything. Also if your brave, pop the cover of the regulator and clean the contacts and eyeball it to be sure nothing is hanging up the relays. <font size="-2">Not likely but since your in there...</font>. But since it went to 17 volts

, run a new ground to the reg if you have to. After that you can help Charlie and 'feed' the Forum.

Nice pics, Troy. Have you ever lined up all the tractors in your collection, I know you've got at least two more, don't you? 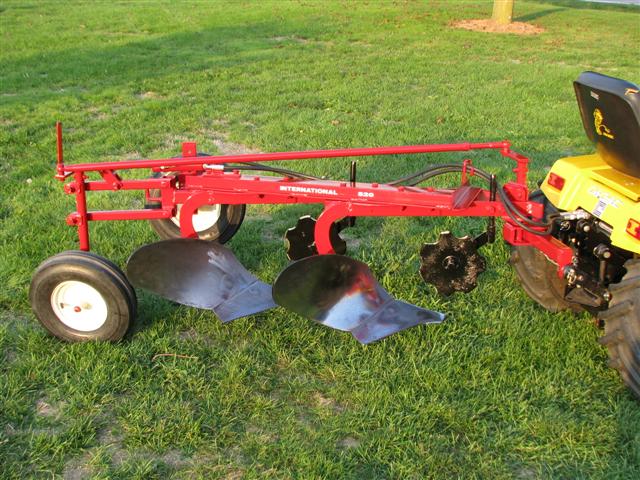 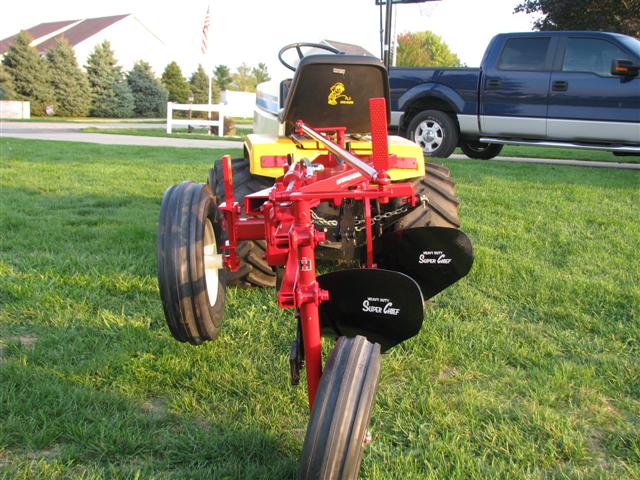 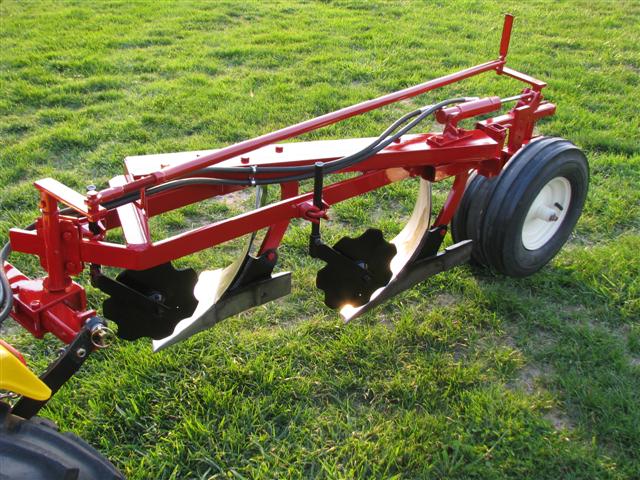 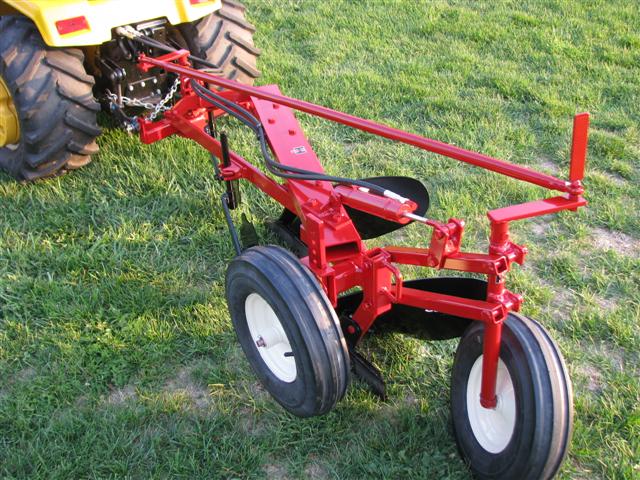 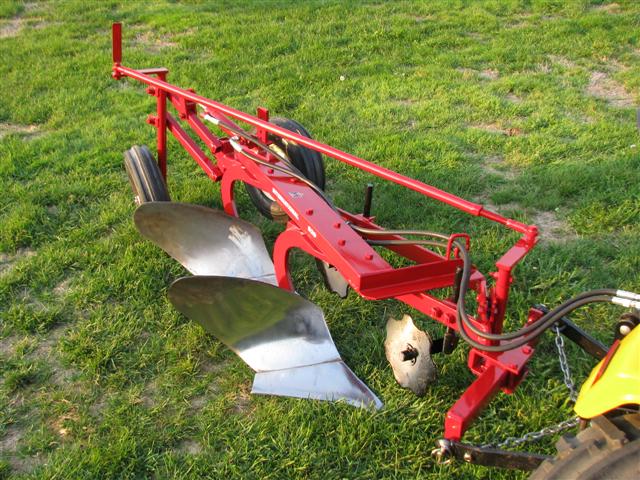 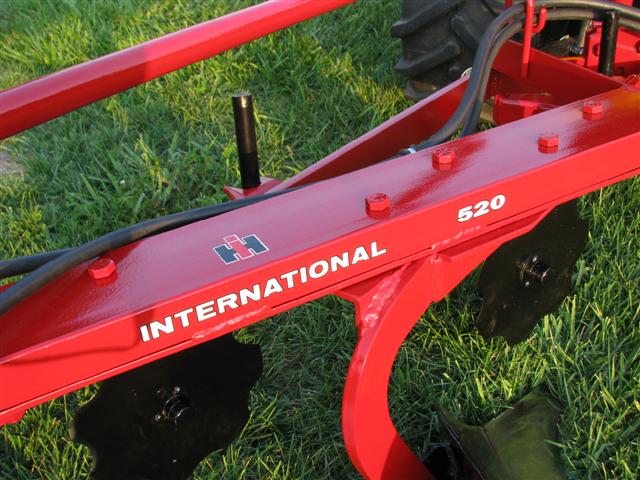 I have a Cub 73. Just realized the snow plow I have is from a Cub 70 I had years ago. Doesn't look like it will attach properly to the 73 because of the quick hook-up arrangement. Any insight appreciated.

Yours is looking pretty nice there too! Great looking paint job!

Steve, your plow turned out excellent.

Now if you put a tarpaulin under the cubs outside it helps keep down the condensation.
N

IMO I'm not sure why your going to so much trouble trying to fab up a dual pedal/dual brake set up. Every Super Cub made has them from the factory. (ex 982, 2072, etc.) I'm sure a quick email to one or a few of the sponsors above would net you they entire system from pedal to pad for less than you'd have in a Hydrualic MC setup. And if your handy enough to fab up a MC system, certainly you can retro fit a super system into a standard model. Probably even a NF with some more cutting.
I have dual brakes on my 2072 and they are only good for doing exactly what you want. Slowing or stopping the spinning/non traction tire to apply power to the other tire. I can stand on one of the pedals and not even come close to sliding the front end around. Maybe a super steer axel would help by allowing the wheels to turn more, but they won't "steer" the tractor at all... Except when I'm doing a wheelie.

Scott Rienbolt,
It should fit, the 70 and 73 are nearly identical troctors except for the grill and hood. Maybe you have a Wide Frame plow if it has a quick attach. The narrow frames didn't have a more modern quick attach. Post some pics, and we'll get it figured out in a matter of a few post.
K

Hi guys.Just bought a 149 and I noticed when first driving it the shift lever gets thrown into reverse a bit when applying the brake.Yes the linkage is worn but it does not make sense.Can someone shed some light on this.Thanks-Keith.

Amy, Amy, Amy - you passed the Blonde test! Yup, we now know for certain you're blonde. The 1250 is a model from the Quiet Line or QL series as Jeff mentioned. But they are "not" part of the 1x9 series. 1x9 would be either 109, 129, 149 or 169 which are the hydro units from the 1x8/1x9 series, and the 86, 108, 128 are the gear drives. They are also commonly referred to as the wide frame series, but in my view (and some don't agree) the QL is a wide frame as well. The number designation 1xx0 that Jeff mentioned does work but it's not generally used. If you just drop the last zero and consider the last digits (5 or 0) as either odd or even, then the 5 identifies it as a hydro or the 0 identifies it as a gear drive just like the earlier series, and the 2 digits before that identify the hp of the tractor, or in the case of the 800 the single digit 8 identifies it as an 8hp unit. I think the 1xx0 doesn't get used since the later CCC units don't really work out quite right and just using QL identifies the series enough for us. And finally, no you don't want to know what Brian W is currently calling his 1250. It will be alot nicer in about a month.

Jeff B - you know I was thinking, it's only 4 or 6 bolts (ya, don't remember) holding the frame to the rearend. Maybe you'd be better off splitting them.

Mike P - I agree with all the stuff on running another ground to your regulator. Ya gotta have a good one. But I'm also wondering if you set the timing after you changed the points. That backfiring stuff makes me think it's way off. In your case I'd recommend using your meter and setting the timing using the static method.

Mr. Plow - that sure is a nice looking 2 Bottom, and the decals are terrific as well.

Scott R - what Nic is saying is correct but I think you're implying your 73 has the "Quick Attach" latch and your 70 snow blade isn't set up to be used with a QA latch. Pics of your 70 blade are really what we need. There are a couple different styles that were used to attach the blade to the 70. You might just have a set up that used the mule drive bracket. This was not the preferred method but would work on a 70. There was also a type of sub-frame that required "frame extenders" (basically a piece of flat stock with 3 holes bolted to each side of the frame that extended downward. If you have this version you could bolt the frame extenders to your frame but it's somewhat of a pain to get it lined up to do this. Another possibility is with the frame extenders bolted to the blade sub-frame, you could insert a 1/2" rod thru the middle hole of the frame extender and then insert the rod into the Quick Attach slot. This is probably alot of info and pics would really allow us the best method to address your situation.

Keith W - yes it makes sense that your brake pedal will pull the hydro control slightly into reverse. Your linkage is out of adjustment. When adjusted correctly your brake pedal should pull the hydro lever into neutral, whether you depress the pedal while in forward or reverse. The linkage gets sloppy with age and you'll probably have to go back to where it connects onto the pump to adjust it. I believe there is an FAQ that addresses how to make this adjustment. And yes, it's most likely when you're in reverse and you depress the brake pedal it only pulls the hydro lever into neutral so it probably seems like that is currently correct, but you have to make your adjustment and find the happy medium. Hopefully when you're done it won't whine on you, which is also common. It's hard to get it exactly correct, and you might find yourself doing it about 3 times before you find the happy medium. I think sometimes you just never really find it, and you live with just pushing the brake part way. I believe most of us on here probably don't even use the brake on a hydro most of the time. We use the hydro lever to slow us down, and the brake for emergencies, or when we get off the tractor and leave it running. AND, if your brakes pads are worn way down (which is likely) and your max'd out on your brake adjustments (which is also likely) then with your brake pedal fully depressed you might still get some creep in your hydro so it's important to make sure its in full neutral when you get off the tractor with it running, and even block the wheels as necessary.

Steve-
The plow looks great. Nice job.... I'm surprised you don't know anybody who's 'putting in an addition' and would let you try it out!

Harry,I did say QL but I thought because they had a wider frame they were 1x9's also....I got the 12 was the HP but didnt know about the 50. So I learned something new there.
D

(IMO I'm not sure why your going to so much trouble trying to fab up a dual pedal/dual brake set up. Every Super Cub made has them from the factory. (ex 982, 2072, etc.) I'm sure a quick email to one or a few of the sponsors above would net you they entire system from pedal to pad for less than you'd have in a Hydrualic MC setup )

I agree with the idea of the purchase price as not many $$ ,but shipping over here could cost big $$ and I think mc break pads would be easier for me to get locally.I do think the MC breaks would be way stronger than our cub set up and I`am trying to find a way to plow my drive and not need Chains. They make such a mess with the scratches on the paved drive.I do know my atv will plow snow and I never need 4x4 to do it unless it is pushing 12" of snow that is real wet from the snow turning to rain.I have a lot a time yet and could use my atv for snow removal but my tractor has power angle and I love the power angle for that job, I don`t have to get off the tractor to change the angle.The is a bunch of atv junk yards near me and I must go look there also , but I do think the atv disk is much thinner and won`t work for me on the Cub disk. 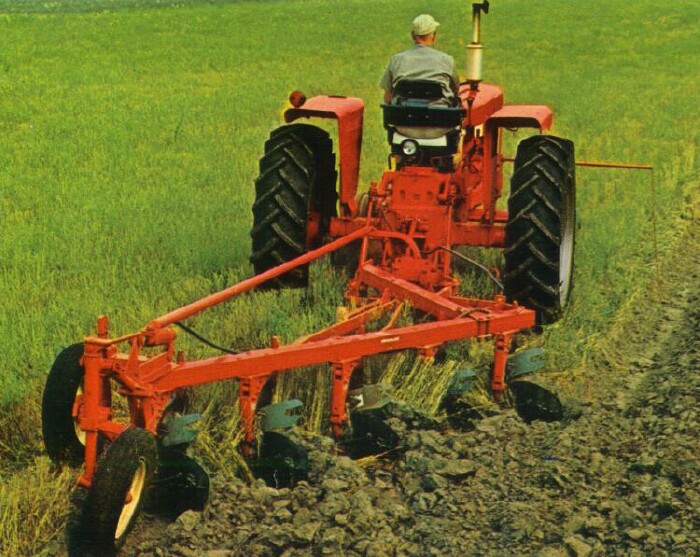 STEVE B. - GREAT job on the #520 plow. Looks GREAT! IH Canton should have done such great paint jobs on plows!

DON T. - Individual rear wheel brakes, steering brakes, whatever you want to call them will help a little pushing snow. Most times when one wheel spins out, hitting the brake on the spinning wheel will cause the OTHER wheel to spin out and you still won't move. Remember I've been pushing snow on my concrete drive for 17 yrs with my full size Farmalls.

Lots of weight is required to get traction pushing snow on pavement. Also helps to keep your speed up, momentum will carry you over slick spots if you're lucky. If you can't run chains, maybe you should try other types of rear tires. There's softer compound ATV tires that can be mounted to CC rear wheels that some have tried that improve traction when pushing snow. I've also read on another forum that HDAP tires work much much better than turf or lug tires pushing snow, almost as good as turfs with chains. http://www.google.com/search?q=HDAP+tires&hl=en&rlz=1T4ADBR_enUS317US317&prmd=imvnsfd&tbm=isch&tbo=u&source=univ&sa=X&ei=T_diUM-vBI6n0AGPlYGoDg&ved=0CCAQsAQ&biw=1007&bih=700 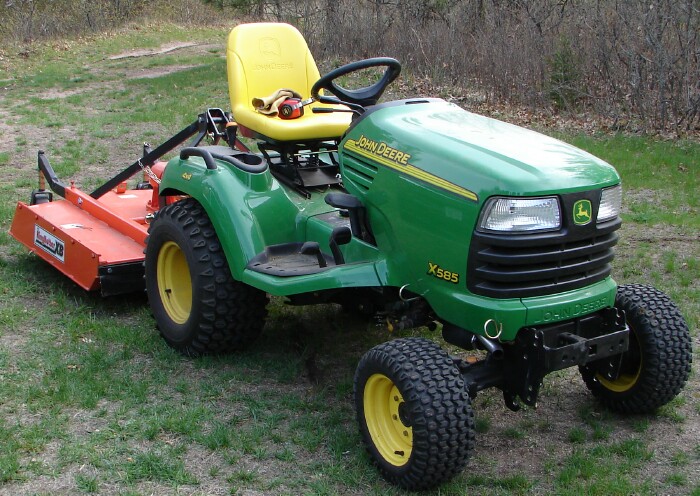 Steve B.
GREAT JOB!
That plow is perfect..very nice job....

Heading out for seat time on the 129 cutting grass, 149 rototilling, and 169 pushing dirt/woodchips debris from log splitting.

will try to post pics later,,,, Kraig you need to find your parents a yellow and white machine

Wayne hope you start feeling better and kick the cold....