DENNIS Day - re Your Onan in a 982 and the extra vent on the crankcase. In that same general location there's supposed to be a rubber hose about 5-6 inches long that runs between your vacuum operated diaphram fuel pump and a vacuum port located on the back face of the crankcase right by the oil filter mount. Is that maybe the port you're asking about? It's a direct air inlet/outlet into the crankcase, has to have something connected to it or oil contamination will occur.

The 982's were the only CC IH used an Onan in, there was a rumor years ago that some early 1872/2072's were built with a few left-over Onan B48G's from 982's but that may not be correct. They're not a bad engine, just not cheap to keep running with parts now days or cheap to run, they seem to burn a LOT of gas. My local CC dealer laughs at me when I ask about Onan parts. Supposedly Cummins dealers can get parts but I get most of mine from Onanparts.com.

DON, GERRY, Jeremiah - ALL CC rearend/diffs were "Open" rearends, no torque biasing ability at ALL. There's a Dana rearend that can be made to fit in CC's, A 7-1/4" ring gear, not sure what number it was but an Air Locker may be available for that. Or you could always do a "Lincoln Locker" where you weld the side & pinion gears together. All things considered, a TORSEN Diff would be the best.

JEFF B. - I think if you some how tie the two tractors together and locate them out of a high traffic area in your shop they will be fine. Just watch for leaking oil if the rearends still have oil in them. Might not be a bad idea to tie them to a rafter in the roof/ceiling too.

I would NOT put them outside under a tarp. BT-DT with my dump trailer the first winter I had it. Even sheltered under the deck when the frost came up out of the ground it got under the tarp and caused rust, lots of condensation inside the bed from the temp swings. Even though just surface rust which lifted some of the paint, for CC's you hope to restore/repaint it makes a WHOLE lot more work. Even storing in an unheated dirt floor shop the same thing can happen. I even get a day or two of sweating concrete floors in my shop most springs.
P

Jeff,
I agree with Dennis about storing then under plastic tarps, that is just asking for rust. The plastic will help cause, and hold, condensation. IMO they would be better sitting out in the weather uncovered rather than covered by plastic, at least they would get a chance to "dry off" sometime rather than the condension being trapped under the plastic.
D

When I build my two Cub storage sheds I put down real heavy plastic under the whole shop and out to the sides . I put a few inches of crushed stone on top of the plastic .There are no vents in either building in the eves . I did plank the floor that both one can look down though the cracks and see the stone under the building. I have a few sandblasted parts store in one building that has not rusted. I don`t see any moisture on my parts at any time.Both of these buildings are at least 24" off the ground and I think that helps with air flow .It is weird to walk into my shed and feel colder or warmer than outside and none have any insulation . So I think that the fact that the tempt changes are slowed down and this alone prevents the contents from sweating. WFM.


Ok,I think they were known as the quiet line series but they are 1x9 ? Geesh I think I failed this test

Amy, quiet line is the answer or just QL will do, but I would of told Harry 1xx0 series. lol

Thanks for the cub storage info, I don't want them outside, just because of weather/rust and with them inside pointing up they take less space (not by much) than just one cub.

My shop has a heater but when I am not in there it stays set at 45f just to keep any fluids in the shop from freezing and it also throws a bit of heat to the animal side of the barn.

One of them is a 108 and the other a 149 both with fluid in the trans/rearend. so I will watch for leaks

I will take the advice of strapping together and then tethered to the cieling rafter.

And Harry that was a good eye to catch my hydro relief valve, I wondered who would catch it first and YOU were my first choice and Tom was second.

I failed to mention we have chickens that are free range and love to lay eggs under anything I cover up.

Will hytran really leak out thru the breather plug??

Been doing a little pre-plow day testing with the new machine. 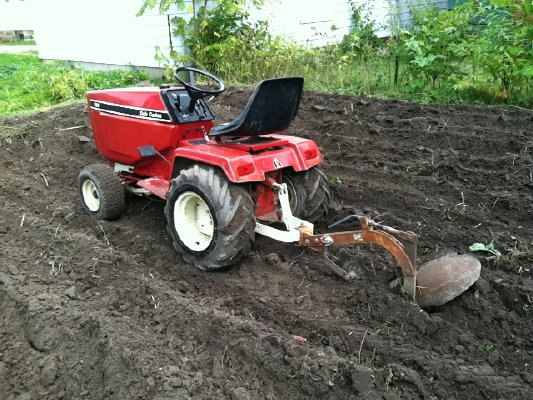 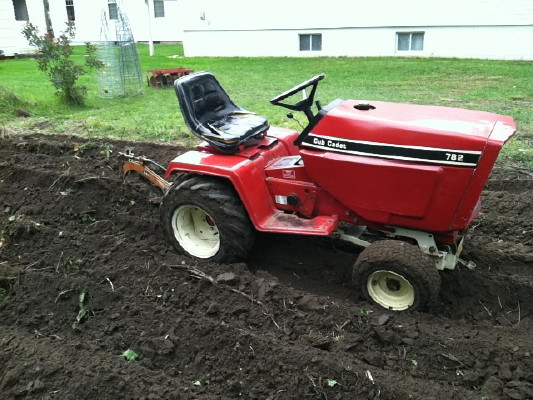 While the QL answer is correct, that isn't what I affectionately call my 1250! There are other answers that are very correct.

Don T,
I postulated the same thing a year or two ago. Someone chimed in as saying a Dana 20 or 25 carrier would work in our cub's rear. Something pertaining to an early 60's Dodge Dart or something...

Don T,
I searched for the word "Dana" in the vault, and there is quite a lot of info there. It appears to be a Dana 25 type rear, and the puller guys have used a LS carrier ....

Phewww...I thought the QL was correct but wasnt positive. Do I wanna know what you call your cub ?
D

Anyone have info on which wheel valve stem to use on the front wheels of a QL? TR412? or TR14? Trying to replace tires and tubes back to tubeless and i won't be near my manuals until Sunday night. I really don't know what the difference is.

Richard C, interesting to see a PSM-6 meter on here recently, it has been a long time, worked in an USAF cal shop and we would open them up dump the water out, wash, dry and they would work, usually. Odd Battery though.
D

DAVID P. - Either valve stem will work. The TR14 was used at the factory, but there are some advantages to the shorter TR412 version.

Having been around CC and full size farm tractor tires for 50 yrs I think tubeless tires, especially on frt tires is a mistake but I haven't been able to convince many of that fact... until they have a flat or slow leaker.
D

Scott Tanner... Looking for "round tuits"...

Thanks for that info, I will have to ask around and see what I can from a friend who has some older dodge parts. I think I might us MC front disk breaks on each rear wheel and have them so I can break any rear wheel I need at any time .I went to a local bike shop today and ask a few questions and the guy said he would look in his stash of parts this week end and let me know what he has. He thought the break idea would work . I just have to get two to test out before I make it a mod with two petals on a Cub. I could see this Mod helping to steer a cub when the front tires want to slide from poor footing.I have time and will have a go at it .

I tested my regulator tonight when I finally got the 100 to fire up. MAN! It sounds sick! Still will not idle up at all and back fires and snorts like a ticked off bull. I did what you had said Allen for testing off the battery with the meter. 12.7 was the reading I got. It jumped to 17. something once quickly then back to 12.7, 12.3, 12.5 etc, never seen 13.# anytime. SOooooooo. Now what? Like I said, I can not get it to idle up what so ever. I did get the points changed before starting it. The old ones had a little discolouration on the contacts, but I just changed them anyway, didn't try to shine them up at all. Anyone have a suggestion or two? Or do I go back to Charlie and order a new regulator and try that?

Dennis F. Thanks! I mostly agree about the tubes, and I have tubes, but someone has talked me into tubeless this time.
T 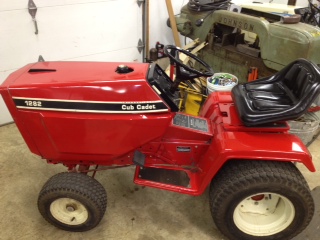 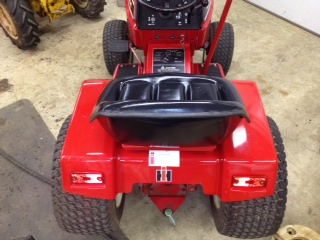 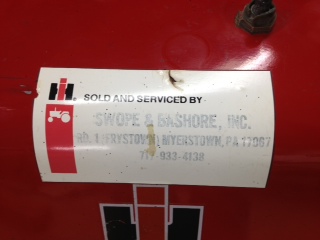 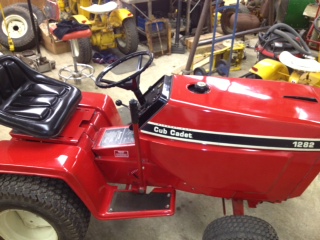 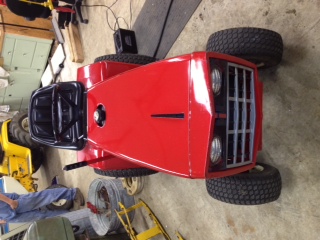 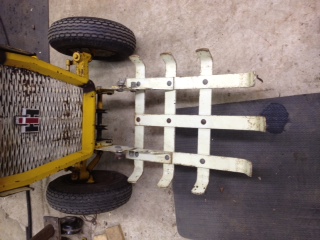 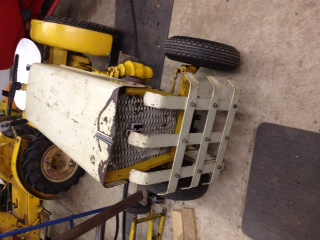 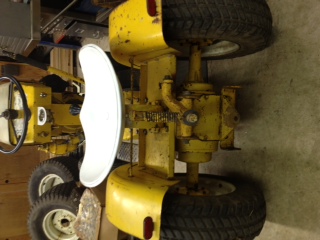 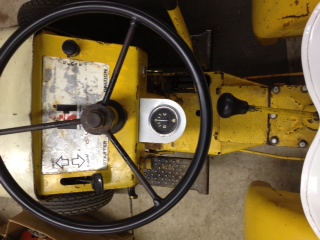 Well the 1282 is one of my prized possessions. It is all in original condition and has less that 240 hours on it. This is my show tractor.

The original i had gotten about a year ago it has a briny gard n cart, rear sleeve hitch and a spring assist, also has a factory mounted charging system. has original 7hp kohler that does not miss a beat i have lights for it they just need to be installed.